Catch up with KSAT: Friday

SAN ANTONIO – Take a look at the big stories you might have missed this weekend and stick around all week as this post is updated with all the latest news from around the Alamo City.

San Antonio police say they are looking into allegations a teen was the victim of cyberbullying. The announcement comes the same day David Molak, 16, was laid to rest after killing himself.  The city, in partnership, with USAA announced a multimillion-dollar grant to end homelessness for veterans by March. Catch up on all your news from this Fri-yay on ICYMI.

After three Bandidos leaders were arrested KSAT dug deeper into the detailed indictment. The family of David Molak, 16, is bracing for his funeral service Friday morning, an alleged victim of cyberbullying. All those stories and more in Thursday's ICMYI.

Wednesday saw the arrest of the three highest-ranking leaders of the Bandidos Outlaw Motorcycle Organization. The Spurs improved to 21-0 at home on the season with 123-98 win over the Utah Jazz. Check out this ICYMI for the rest of Wednesday's news.

Tuesday brought a shakeup at UTSA as Larry Coker stepped down as the Roadrunners' head football coach. President Barack Obama announced plans for executive action designed to reduce gun violence in America. Catch up on all the news from Tuesday in this ICYMI recap.

Initial predictions before the holidays of mass deportations fell short over the weekend. However, some predict those families are only the first of many yet to be deported.  OUt: Reagan graduate Trevor Knight is leaving Oklahoma for Texas A&M. Don’t suffer from a case of the Mondays, catch up on your headlines here, ICYMI.

Holy moly! That was one heck of a game! Bram Kohlhausen's 8-yard touchdown run in the third overtime carried No. 11 TCU to a wild 47-41 victory over No. 15 Oregon in the Alamo Bowl on Saturday night as the Horned Frogs stormed back from a 31-0 halftime deficit behind a backup quarterback.

The historic comeback quickly overshadowed the other big story surrounding TCU. It began when quarterback Trevone Boykin fought the law and the law fought back. Boykin was arrested and suspended from the game. KSAT had you covered at every turn, from Boykin’s release to Chief William McManus’ press conference. Then just hours before the game TMZ released the video showing the altercation. But amongst all the drama there was this gem: A family in town cheering on their sons -- one played for TCU the other Oregon. 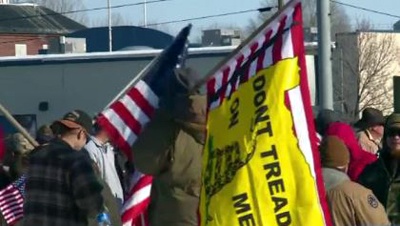 Armed protesters have taken over a building in a federal wildlife refuge in Oregon, accusing officials of unfairly punishing ranchers who refused to sell their land. Looking for a full-belly chuckle? Search #ORMilitiaDemands on Twitter.

San Antonio police said a man tried to force a driver to get out of his SUV at gunpoint at the corner of Culebra and Ingram roads late Friday. But the driver turned the tables on the wannabe carjacker, pulling his own gun and opening fire, police said.

The Spurs delivered a knockout Saturday night against the Rockets, winning their 20th straight at home. We even caught up with plenty of fans -- see if we spotted you! The Redskins put the boys in blue out of their misery Sunday, defeating the Cowboys 34-23. The bulls are on parade in Houston after the Texans clinched the AFC South title.

Natalie Cole, the Grammy-winning singer who had hits with such songs as "This Will Be" and "Our Love" and recorded "Unforgettable ... With Love," a best-selling album of songs made famous by her late father, Nat King Cole, died Thursday evening.

Blue Bell Creameries is under criminal investigation by the U.S. Department of Justice for its handling of the contamination of its ice cream that was linked to 10 reported cases of listeriosis. Three of those believed to be sickened by Blue Bell frozen treats died.

Don’t lie, you know you would do this too! The Powerball Lottery is up to $400 million. The next drawing is on Wednesday. Just an FYI, Powerball estimates the chances of someone picking the jackpot-winning numbers are about one in 300 million.