Trust Index: Can hydrogen peroxide be used as a disinfectant to kill COVID-19?

After plenty of relationship twists and mysterious turns, Riverdale's fourth season is officially over.

Although season 4 was cut short due a production shutdown over coronavirus concerns, episode 419, "Chapter Seventy-Six: Killing Mr. Honey," served as The CW drama's final episode and left fans with a jaw-dropping cliffhanger.

While the premiere date of Riverdale's fifth season is still to be determined, we do know one thing for sure: There's a whole lot of drama headed our way!

ET called up creator and executive producer Roberto Aguirre-Sacasa and asked him to break down everything that's coming up next for each of the couples at senior prom.

Plus, will Marisol Nichols and Skeet Ulrich return for more episodes next season? And are the Riverdale writers having any regrets about that Archie and Betty cheating storyline? Keep reading for exclusive season 5 secrets you won't find anywhere else!

First of all, congratulations! You made it to the end of the season. Obviously, you weren’t anticipating having 419 serve as the season finale. However, we are ending this year on a big cliffhanger with the videotape mystery. How are you feeling about this finale?

Roberto Aguirre-Sacasa: You know, we always kind of do two or three little mysteries that go through the year. And this year, one of the big ones -- god, it feels like a lifetime ago -- was about Stonewall Prep. The mystery of those folks, and Jughead’s grandfather, and Mr. DuPont and all that. We let this other mystery bubble along kind of quietly, and then it sort of comes roaring back in the last few episodes. So from the end of [the] Hedwig [musical episode] and on, it sort of is the mystery that propels us forward with a lot of twists and turns.

I feel like it’s a really good mystery, and it’s really about the town and about the kids, so I do think it’s nice that we’re gonna get to finish that. Again, in 19, everyone is sort of together, which is really, really nice, but in 20, all of the relationship stuff that we’ve been playing throughout the season, kind of, comes back. So, I think the good thing is when we come back in season 5, we’ll have a very big mystery to unravel and a lot of relationship stuff to sort out.

Let's talk about that relationship stuff. How are you feeling seeing the fan reaction to Archie and Betty kissing and exploring their feelings for each other? Obviously, these are two characters who have known each other forever, and exploring a relationship between them seemed inevitable, but fans were upset that this happened through a cheating storyline. Looking back, how are you feeling about that decision?

Listen, as you know, when I approach these characters, I’m a fan as well, and I feel like it was interesting that Archie and Betty kissed. That was, in true musical theater tradition, in the heat and the passion of the song and it was interesting. Then, in the next episode, the kids kind of like, take stock of what they did and try to figure out, “Do we want this? Do we want this to go further?” And, I do feel like, obviously, they were emotionally wrapped up in each other, and I was happy that they didn’t get any more physical, and I was happy that they both kind of reflected on what they did. But listen, I get it. Whenever we write these things and when we first watch them, every so often I see something and it’s like, seeing that Betty and Archie kiss, I was like, “Wow!” Even though it’s just two teenagers kissing, it’s so shocking for the mythology of the show, and it’s so shocking to the mythology of the characters.

And, like I said, even though it’s the status quo in 19, there’s still so much to play about that. You know, Jughead hasn’t found out. Veronica hasn’t found out. We know that it, sort of, drove Betty to really value Jughead. And with Archie, we’re not really sure what that emotional tryst with Betty did to him, but I can tell you it’s some huge, huge shockwaves are gonna roll out from that. So, I do feel like I understand it, and these fans are really wrapped up in these characters. It’s also a reminder that for all the mystery, for all the shock twists, for all of the gonzo storytelling -- what I think people are really involved in is those relationships. So, I think in the long run, it will be a defining moment for, actually, all four of them, so I'm excited for people to see what's next.

Speaking of the long run, it was announced that we're losing a few of the adult actors, Marisol Nichols and Skeet Ulrich, after season 4. However, due to the fact that some of the season 4 episodes will now be playing in season 5, do you think we could still see Hermione Lodge and FP Jones for a bit next season?

Yeah, you know, it’s funny. When all this stuff kind of started coming down, I called Marisol and I called Skeet and I said, "Listen, guys, obviously we want to finish the episodes. We want to give you guys the goodbyes that we’ve written." And I don’t think I told Skeet what his goodbye was gonna be like. I had told Marisol, and Marisol was like, "Okay, but do I still get to do X?" And I’m like, "Yes you still get to do X!"

And you know, the truth is neither Hermione nor FP are going to die. My hope is that FP and [Hermione] are frequent visitors to Riverdale for as long as Riverdale continues. So yes, they will definitely be in those early episodes [in season 5], and hopefully, you know, we’re planning to have them both come back kind of like how we had Molly [Ringwald] this year.

Lastly, Roberto, let's do our traditional Riverdale romance rundown! I'm going to give you a couple, and you can give me a tease about what's coming up for them in the big senior prom episode -- aka the season 5 premiere. First up, Bughead: Betty and Jughead!

Bughead. They’re still gonna be very, very deep in the videotape mystery, but, before graduation, they are going to have a very, very, very big conversation about their future. Since they’re going to different schools, so, they’ve got a very big, difficult conversation ahead of them.

How about Varchie: Veronica and Archie?

Varchie’s got a very, very dramatic prom episode. A lot of stuff comes out at prom. You know, we haven’t heard or seen the last of the song that Archie wrote for Betty, and right at this moment where they should be celebrating everything, a lot happens. It’s pretty dramatic what happens at prom with Varchie.

Next up, Choni: Cheryl and Toni?

You know, Cheryl and Toni -- it’s interesting. In the prom episode, we sort of play them a little bit as Romeo and Juliet. Which is to say that Cheryl finds out that Toni’s family has some pretty strong opinions about Toni dating Cheryl. And we find out that Toni’s family hasn’t even known that Toni has been dating Cheryl, so they’ve got some star-crossed drama coming up soon too.

Oh! That sounds like that’s the Toni backstory episode we've been waiting for.

There is definitely a lot of Toni’s backstory. We meet some of Toni's other family members. It’s a good story.

Lastly, let's talk about Barchie. What can you tease about Betty and Archie’s potential dynamic in the prom episode?

You know, coming out of episode [418] last week, where Betty says, "Whatever this was, we have to stop it." I think coming out of that episode we saw that Betty felt really good about recommitting and rejoining Jughead. But Archie felt a little bit at sea after Betty said "let's stop this." So I think in terms of Barchie, I think we’re gonna kind of follow those two paths. In a way, that liaison between Betty and Archie sort of reconfirmed Betty’s love for Jughead, and reconfirmed that Archie’s kind of confused about what he wants right now.

So, we’re playing both of those really, really heavily. Again, not in [episode] 19 [which is the season 4 finale], because it’s just a fun lark of an episode. But in what would have been [episodes] 20, 21, and 22 -- which will be our first three episodes when we come back [for season 5] -- we’re hitting that story pretty hard. There’s a lot of drama coming for sure.

Looking for even more exclusive Riverdale secrets? Don't miss this week's all-new episode of Stream Queens premiering Thursday, May 7, at 8:30 p.m. ET / 5:30 p.m. PT on ETlive.com. Riverdale star Camila Mendes is revealing how she really feels about that Barchie storyline and if we'll get a time jump in season 5! 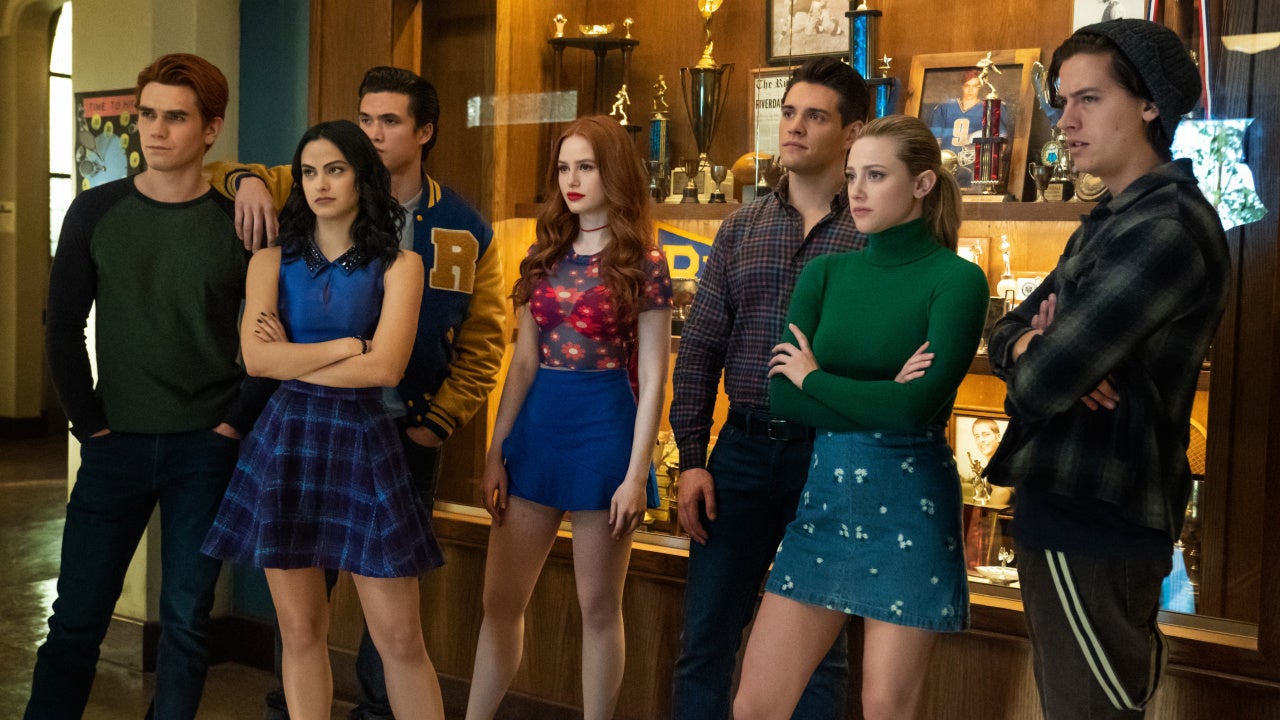