'Dead to Me': That Twist-Filled Ending Is a Huge Tease for Season 3, Creator Says (Exclusive)

Warning: Do not proceed if you have not watched season 2 of Netflix's Dead to Me. You are about to enter major spoiler territory.

Now that we've all had a moment to appreciate the surprisingly perfect (and yes, totally insane) twist in the second season of Dead to Me, we have to talk about that finale. Netflix's dark comedy wrapped up another addictive 10-episode run with a climactic ending that left more questions than answers. But such is the rule, not the exception, on a show as deliciously twisty as Dead to Me.

After Jen (Christina Applegate) confessed to Detective Perez (Diana Maria Riva) that she, alone, killed Steve (James Marsden) and buried the body, alone, she was prepared to suffer the consequences, aka serve lots of prison time. Except, the suburban mom of two learned that Perez wasn't so bad after all. The Laguna Beach investigator let Jen go scot-free because she came to the conclusion that Steve had it coming to him. (Rest not in peace, Steve?) Before then, Jen had written several letters -- one to Judy and two to her sons -- coming clean about having murdered Steve and effectively handing over her home and guardianship to her friend. Thankfully, none of the letters to her kids were ever opened. Whew.

Just when it seemed like Jen and Judy would be getting Steve off their backs for good, a hiker's dog started digging something up -- right at the foot of the tree with the hand-carved heart, indicating where Steve's body was buried. "Maybe," creator Liz Feldman coyly answered when ET asked her to confirm that that was the case. Moments later, Steve's "semi-identical" twin brother, Ben (James Marsden), received an important phone call. His worrisome expression and initial response, "They found him?" naturally led us to believe it was regarding Steve's body. Feldman, again, cautioned not to jump to conclusions, saying that "perhaps" that was what the call was about. "We're not quite sure" what kind of call he received," the executive producer danced around the topic. "I mean, I'm sure but you're not."

That's only half of the cliffhangers left by the finale's end. Jen's eldest son, Charlie (Sam McCarthy), discovered his mother's confession letter addressed to Judy. Does he open it, read the original letter and find out the truth? Then, there was the violent car crash at the stop sign Jen successfully campaigned for -- the irony -- by, who else, a drunk Ben, who sped away from the scene after T-boning Jen's car. Had Ben just learned about Steve's death moments earlier? If not, who was the "him" Ben was inquiring about? What caused him to be so upset it drove him to drink?

"I don’t want to say too much just because in terms of what you are left to feel and think and wonder is a really individual experience and I certainly wouldn’t want to color that for anybody," Feldman said of the climactic finale ending, hinting that Ben may have skeletons in his closet. "But I think with any big finale, there should be an element of like, 'Wait, wait, wait... what?' So we were definitely going for a little bit of 'Wait, wait, wait... what?'"

"We’re dealing with a lot of things throughout the season and we wanted to find a powerful way to show not tell a completion or a full-circleness to some of those things. And we felt like this was a good way to do it," she explained. "There’s obviously a motif running through the show with cars and with crashes, so that was what led us there. But all stories that we tell on this show, we’re always aiming to subvert your expectations and to surprise you and to delight you. Surprise and delight really color a lot of that. That's what we’re going for. I felt, when this was pitched, it satisfied those things really well. It was really surprising, and there’s an element to it that is really exciting and a little scary and certainly shocking. You always want to leave threads dangling so that you have something to answer in season 3, and also hopefully you’re enticing your network or your streaming platform to keep the story going for another season."

Because season 1 ended in such dramatic fashion, the onus was on Feldman to concoct a season that was even more surprising and shocking. "My approach was, how do I authentically tell this larger-than-life story? I always try to put myself in the position that the characters are in, almost empathetic. How would I feel if I had to deal with a dead body floating in a pool as a 40-something-year-old woman, who, from the outside in, people might think I’m normal, but here I am in this crazy circumstance?" Feldman said. "I posed that big question to the writers and they took it from there and dealt with the practical reality of dealing with a dead body. That's how season 2 was born."

Part of the comedy of the season was experiencing Jen and Judy often failing at hiding Steve's body in plain sight, first in that extra large cooler in the garage, later in the trunk of their car and then buried by a tree. "We just try to approach it as realistically as possible, even though it's quite a heightened situation," Feldman said with a laugh. "We always approach any kind of story we’re telling from their two unique perspectives. Jen has one way that she looks at the world and Judy has almost an inverted way that she looks at the world. They’re almost there as a checks and balances for each other, for better or for worse. In the end, it is their friendship and their love for each other that helps guide a lot of their choices throughout the season.

"It was a fun way to even the score," Feldman said of forcing Jen and Judy to come together by having to mutually hide the Steve secret, even though they began the season on shaky ground. "It allowed there to be a role reversal where Jen is very much the sorry one, or she should be, and Judy is more the unwitting victim. It was fun to play with that contrast as opposed to last season. The first season, for us, was a lot of about setting up a situation between two people where forgiveness would be the only way through. But it’s a nearly impossible situation to forgive, and we’re furthering that question of what is forgivable? What does it mean to forgive? Who is forgiveness for? Is it for the person you’re forgiving or is it for yourself? And Jen and Judy have two very different perspectives on forgiveness that we bring to the other side."

Though Dead to Me hasn't officially been picked up for a third season, Feldman has a blueprint for what she's looking to accomplish in another season. "I always start with the beginning, middle, end -- the tentpole moments throughout. And then I rely on the fact that I work with incredibly talented writers, many of whom are smarter than me who are going to come up with even better ideas than I will. I have a rough sketch and everybody really comes in, colors it in and brings it to life."

But can Feldman and her team of writers top the surprising twin twist at the top of season 2 that left many viewers viscerally stunned? It's a tall task she's very much aware of. She's already masterminding another iconic plot reveal that will, hopefully, live up to the twin reveal. "Listen, I’m glad you had that reaction. That's awesome," Feldman said with a laugh. "As writers, we’re always trying to top ourselves and that's always challenging myself to do better and to think of things that are even more fun and surprising. You’ll just have to see."

Dead to Me is now streaming on Netflix.

'Dead to Me': The Story Behind the Wild Season 2 Twist (Exclusive)

What to Stream This Weekend: 'Dead to Me,' 'High Fidelity,' 'Twilight' and More!

'Dead to Me' Season 2 Trailer Has a Message for Jen and Judy: 'I Know What You Did'

Linda Cardellini and the Daring Duality of 'Dead to Me' (Exclusive) 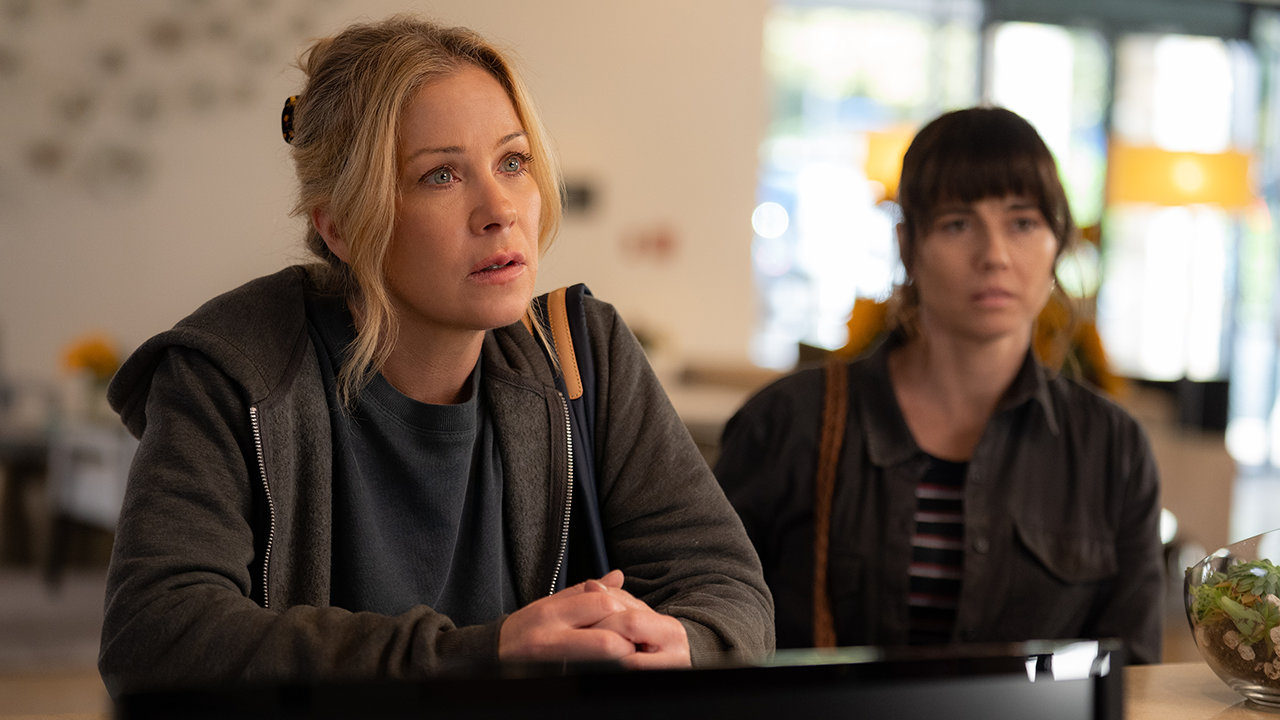