A wind advisory in effect for Lavaca Region

How to replace your key fob

Spoiler alert: This story contains plot points from the first two seasons of The Split.

British drama The Split, which wraps its second season in the U.S. on Friday, explores the institution of marriage through a family of female divorce lawyers. The central protagonist in the series, Hannah Stern (Nicola Walker), is one of three sisters who followed in their mother's footsteps, fighting for well-connected, wealthy clients in messy divorce cases. Married to a barrister, Nathan (Stephen Mangan), and mother to two kids, Hannah's seemingly perfect life unravels when a former beau, Christie (Barry Atsma), joins the firm, forcing Hannah to question her own decisions and the past she thought she left behind. When infidelity threatens her marriage and she begins an extramarital affair with Christie, Hannah's life begins to crumble.

For Walker, who's starred in a slew of memorable British fare like Spooks, Last Tango in Halifax and Four Weddings and a Funeral, The Split reunited her with creator Abi Morgan, with whom she worked on River and who also gave her the opportunity to tackle the complexities of love, relationships, affairs, money, manipulation and power in a new way. Think The Good Wife meets The Affair.

"It's unlike any other drama I've seen for a long time because it is really about love. It's really about connecting, not just within marriage, but between people -- how we miss each other, how we miscommunicate and how those tiny mistakes you make can, years down the line, become a huge problem in your life," Walker told ET, revealing that Morgan's long considered The Split to be a three-season story. "It's about people saying things that are normally left unsaid and people say them in this show. It's not a downside. You get to see inside people's relationships. You meet people and you think, 'I wonder what they're really like behind closed doors?' You get to find out in all its glory and in all its destructiveness."

"At its heart, I think, is something really hopeful about the idea of loving somebody, because although experience tells us it often doesn't work, we still keep trying," the actress added. "On some level, although this is a show -- to a large extent -- about things breaking down, it's also about the constant hope and the desire to keep trying to connect with somebody. I think it's really beautiful for that reason and it's very sexy. It looks very beautiful, and it's beautifully written."

In a recent chat by phone with ET, Walker discusses why she gravitated toward The Split, the uncomfortable spaces she's been put in through her character's imperfect decisions, and why, amid a pandemic and protests around the world, the female-led show could serve as a temporary salve one hour at a time.

ET: What drew you to The Split?

Nicola Walker: The initial draw was Abi Morgan writing it, and then Sister Pictures making it, so they had me at that really. They sent me four scripts before the audition, and I read all four scripts that morning, as soon as they arrived in the post. I thought, "There's absolutely no way on this Earth I'm going to get this part." I loved it. I thought it was brilliant. I hadn't read anything like it for ages, but it's the fact that it was Abi and her writing. That it had this family of women. That you could look at love through the prism of family law. Having worked with Abi before, I knew what she'd be interested in are the relationships. So I went along to the audition incredibly relaxed. I feel this often with auditions -- it's a pattern with me -- but I was utterly convinced I am not right for this. The first thing Abi and the director said is, "We think you are," and that was before I'd even auditioned.

What has been illuminating for you in unpacking relationships, marriage and love through the prism of divorce law that you didn't quite realize before?

I did feel like I was unpacking stuff, both series actually, that people hadn't asked me to before in television. The first series, I felt like I was being asked to think about what it feels like when you feel like you maybe made a mistake, sort of sliding doors. You made a mistake in your life, you jumped one way, you've always wondered should you have jumped the other way. I think a lot of people feel like that. That's a common feeling that people keep secret within their relationships as time goes on. But the second season, Abi just blew the doors off the back of the van, you know? She blew the whole project up in a really interesting way, because what becomes clear is Hannah feels she made the right choice, but she didn't marry the person she loved. But she still thinks that was the right thing to do. She loves the person she married in a different way, and she's lived with that and made a good life from that.

The thing that I had to really unpack with that is how unsympathetic Hannah is in the second season. And I find that really, really interesting to play because on the back of us all wanting better female parts, sometimes you feel like the writing is presenting these amazing heroic women who are so capable and brilliant and top of their game. Hannah is those things, but I'm being asked to play someone who makes a lot of mistakes and does things that make her not appealing to the the audience sometimes. It seemed to me a very truthful representation of somebody -- and not necessarily a woman. It is somebody making complicated choices in their life where nobody wins. She knows that better than most people because she watches it come in and out of her office door day in, day out. And she's been living in this marriage that was built on a bit of a lie. It felt to me like it was as complicated as real life gets, while being set in this very glossy world. It's a mess, like life.

Was there a moment during these two seasons where you had difficulty reconciling with a choice she made or the path she was putting herself and her family on?

Hannah did things this time that, yeah, they were really difficult to play because you're trying to understand how. You find out [in season 2] she's moved into Christie's house. She's left the book and makeup by the bed, and it's such a fantasy world that she's living in. You read that and you think, "What are you doing?" But Abi steers you through it because she's laid all that down for you. She's laid the foundations for Hannah doing that because she's loved this man since she was 19, 20. What she does in the second season, you see her behavior on the rebound from that trauma with her father [who died at the end of season 1]. I kept thinking, "I know she's going to pull out of this [affair]." She is not going to break her family up, because she doesn't want to be her father. That is ingrained in her. She won't explode her family, so she is, at some point, going to destroy this affair. And none of it's good. That was the most problematic side of playing it this [season], that you strapped yourself in at the beginning of filming. There wasn't going to be a happy ending. Whichever way it goes, it's not going to go well. There are only about two or three possible outcomes of this affair for Hannah, and they're all bad. That was the hardest thing, knowing that was going to be difficult.

But that's why TV can be a safe place. You can go there and see the implosion without actually having to deal with the aftermath in real life.

Yeah. There are days on The Split where you don't feel great about yourself. There were days when me and Stephen Mangan, and me and Barry Atsma... I would have scenes with Stephen and we'd hang our heads between takes because of the things we're saying to each other. And the same with Barry Atsma. He does things this year that are appalling, and he does them as an act of vengeance. But again, scenes with Barry where, in between takes, we'd both be looking at our feet and just shaking our heads.

Though it's already aired in the U.K., season 2 is just now wrapping up in the U.S. What can you tell us about where Hannah is at the of this season?

A lesser writer would have given us a happier ending. It's a difficult end to watch, but I believe it. I really believe it. There's a meal between Hannah and her husband and her children. The most brilliantly written scene, I think, and the final beat of the season for Hannah is that I don't know where she goes next. And that's a really great ending -- that she doesn't know. Having spent two seasons with this woman, she'll do something. She's not going to lay down. She's going to get up, she's going to go out into the garden with her mother and her two sisters and her kids, and she's going to keep putting one foot in front the other. She's going to get up and go to work the next day and be brilliant at her job because her ability to continue to work is, without a doubt, one of the things that I'm most impressed by her. I would probably personally have crumbled.

I think I went through all of those while we were filming it. Abi was leading me through all of those [stages] because that's what Hannah's been going through as well. I think we leave her thinking she has made a mess of everything, but she knows... It's not as if she would say, "I wish I hadn't done it," because I think she knows if she was presented with the possibility, she was always going to do what she did. And now, I think she feels that she's got to pay the price for that -- and it's going to be a high price. She is on her own. We leave her on her own. But who knows what people need, you know? I've given up theorizing on what people need. I don't know if she needs to be on her own.

Season 1 of The Split is streaming now on Hulu. The final episode of season 2 airs Friday, June 5 at 12 a.m. ET/PT on SundanceTV; both seasons are also available to stream on SundanceNow.

The Best British Dramas and How to Watch Them 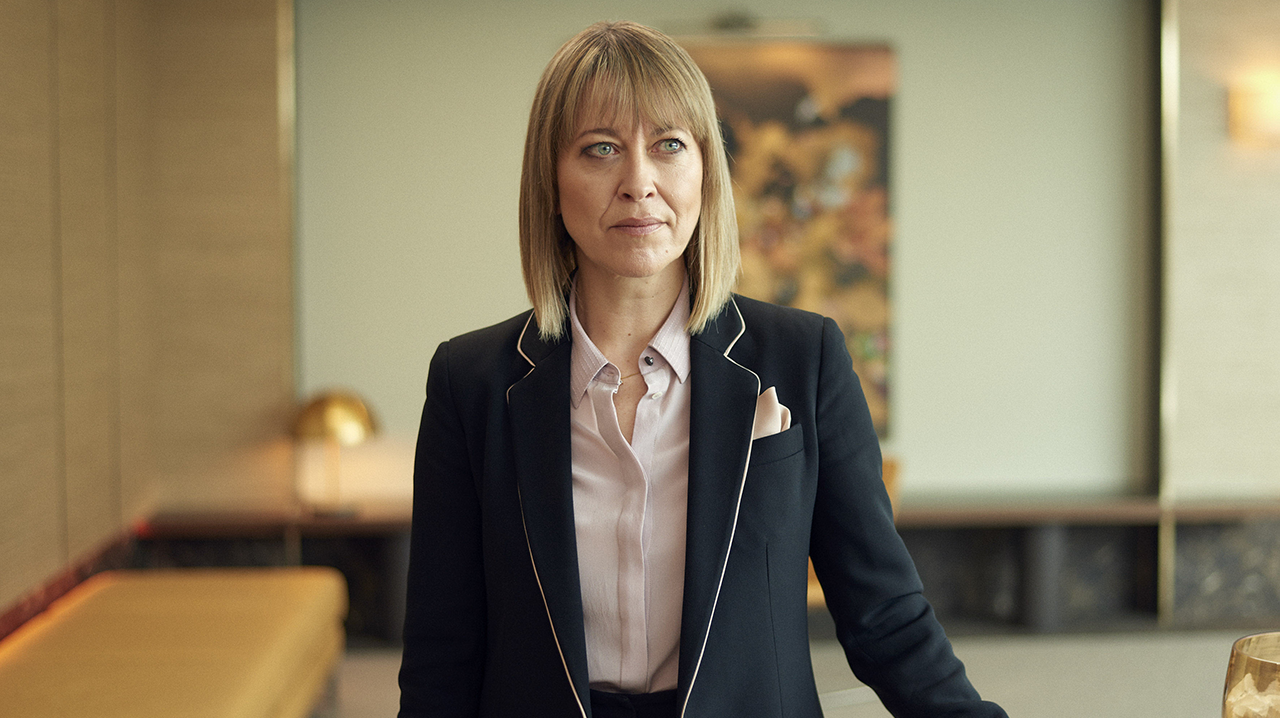