A river flood warning in effect for Live Oak County

Stephen 'tWitch' Boss and Allison Holker are sharing how the Black Lives Matter movement and recent protests have impacted their kids. ET's Deidre Behar spoke with the longtime couple via Zoom, and they revealed how each of their children is feeling amid the current world climate. Boss and Holker share three children, Weslie, 12, Maddox, 4, and Zaia, 7 months.

While Zaia is too young to know what's going on and, as Boss puts it, Maddox's days are currently "comprised of joy and nothing else," Weslie has been inspired to get involved in the movement.

"We have absolutely had conversations with her," Holker says. "Gen Z, they are wise. They are very observant and they are about change. They’re the ones on the front lines right now looking up information, signing petitions. They are active in this community."

"My daughter and her friends, they all have conversations with each other about their personal experiences," she continues. "It’s so inspiring to see such a young generation be like, 'Why do just adults have to talk about this? I’ve seen this.' Our daughter is continuing to learn, but she is about it. I think a lot of these kids are. They want to see action. They want to see change... My daughter is very, very active in asking us, 'What are we gonna do?'"

One of the things Boss and Holker have made it a point to do, is to explain to Weslie why some people may view her, as a white child, differently than her mixed-race younger siblings.

"[I've told Weslie,] 'There's a world that exists that looks at them differently, and might try to pin things on them, or just think that something is up with them because of their skin," Boss says. "'I need you to be aware of those things and also not be afraid to be the one that is a shield and to make sure that they are good... That's more than ally-ship, that's your family.'"

As he's tried to impart on Weslie, Boss wants others to understand that there's "a difference between being a good ally and an effective ally."

"Good allies will show up to a protest, and hold up signs, and sign petitions, and donate money... Whereas an effective ally is literally writing down certain goals to achieve at the end of the month... like, it is actively being involved in dismantling a system," he explains. "So it’s good to have the notion of 'I am an ally,' but more than being a self-proclaimed ally."

Racism is something that Boss says he's "always known" since his days growing up Montgomery, Alabama. For Holker, though, growing up in "a very white community" left her sometimes "naive" and "oblivious" to it.

"It’s about time for us to drop those walls. We have to open our eyes [to the fact] that this is a real thing that is really going on," Holker says. "Just saying that you are not a racist, it’s not strong enough. You need to join in and help, because we are all in this fight. This is our world. This is the human race, and we all have to be together and united."

Holker says she "so grateful" to have Boss in her life, as he's "educated" her on "so many different fronts." As for educating others, Holker notes that she wants people to realize that discussions about safety as a mixed-race couple still happen today.

"There are still places that feel a little uncomfortable for us to go together. Some people don’t understand that there are times that we have to be very aware and cautious. [We have to ask,] 'Is this OK? Do people see us as equals?'" Holker says. "We have those discussions and I don’t think people understand that those discussions really do happen."

Through the couple's travels for their work, they've discovered that non-metropolitan cities are often less welcoming to them as a couple.

"Sometimes we find ourselves in certain places and pockets where we kind of get hit in the face, like, 'Oh right,'" Boss says. "You kind of have to move a certain way or kind of keep our head on a swivel."

Early in their relationship, Boss and Holker got "blatant" looks "from just holding hands" while at the Dollywood theme park with Weslie, something that Boss says was a "stark reminder" that they were in Tennessee. Likewise, Holker recalls an experience at the airport where an older white man made a scene in the TSA line.

"It broke me at that moment because I think that was only a year or two years of dating, and I was like, that was a firsthand experience of someone in public just yelling, and accusing him of something that was just obscene," she adds, noting that her husband is "the kindest, nicest, most welcoming warm heart."

Those experiences and smaller ones -- like people crossing the street or clutching their purses at the sight of Boss -- combined with the current climate, led Holker and Boss to make a video titled "White Privilege Is Real," in which they put fingers down for racist experiences they've faced.

"I didn’t realize how impactful that video was going to be," Boss says, as his wife explains why she thinks it "resonated with a lot of people."

"People obviously have a knee-jerk reaction, and they don’t think that their small reaction is going to cause harm to someone, but they don’t realize that those small things add up, time and time again," Holker says. "People looking at you, and accusing you of stuff that isn’t true, and then those things start getting bigger. Those accusations start getting longer, and bigger, and more dramatic when none of it is true."

"I think that people, through the video we made, might have realized [that] we do this on a daily to each other. They might have remembered a moment where they did it to someone," she continues. "I think it’s an example of [how] we really need to change this. We need to look inside our hearts and realize that we are better than that. All of us can be so much better, and everyone deserves a chance here."

Listen to the ones that need to be heard. Voice: @bigmammaofficial

As for what can be done to combat racism in our country, Holker points to school curriculums changing to include more role models of color, while also "being honest about what's happened in the past." Meanwhile, Boss reiterates his plea for people to continue to take action.

"One of the most important things that can be done is after the trend of this is over is that we are still active, and educating ourselves. Not only educating ourselves, but taking action," he says. "Whether that is even noticing the things that are in the 'Privilege Is Real' video, [being] aware of those things every single day, and not being afraid to call out friends where you see it. So then we are actively dismantling the well-oiled machine that racism actually is."

"Racism is built like a super-fine wrist watch. Seems really, really easy. But on the inside, all of the intricacies, all of that, to actually dismantle that thing, we have to go deep within it," Boss continues. "We have to stay ever-vigilant. As hype as we are right now, we have to have this same fire in our hearts next year. We will still be fighting the good fight and hopefully we’re gonna knock off a bunch of notches in that."

One person making a difference to Boss is Ellen DeGeneres, who has been amplifying black voices on her show recently. Additionally, the talk show host has personally spoken to Boss, the emcee on The Ellen DeGeneres Show, on the phone.

"She's cried, expressed her confusion, her anger, things like that," he says of their phone calls. "We talked pretty extensively about what's going on, and our feelings, and shared experiences. There's no performance for the cameras. Everything that she's talking about is heartfelt and the direction that she, the team, that we are taking the show in is because it needs to be done. It's literally coming from the inside out."

While Boss has gone through emotions of "incredibly sad, to very hopeful, to inspired, to angry" throughout the recent movement, both he and Holker are committed to working to inspire change.

"We do have mixed children and we want to share with them this advice, and this role, and this education," she says. "I think beyond just teaching our kids, we really want to just educate others."

One way they see change happen is through the recent protests, which they've both attended separately.

"It was one of the most beautiful experiences being out there in the streets. Everyone was celebrating. The reason they were celebrating is because people's voices were finally being heard. Everyone was telling stories, people were taking knees, people were praying together, people were having moments of silence," Holker says. "People were passing out masks to make sure everyone was being safe out there, passing out water bottles, snacks. It was a very inviting, spiritual experience... It's time we heal ourselves so that we can all together move forward."

"That kind of camaraderie and that kind of ally-ship, that's something that I'll remember for a lifetime," Boss adds. "I'll be able to tell our grandkids about this." 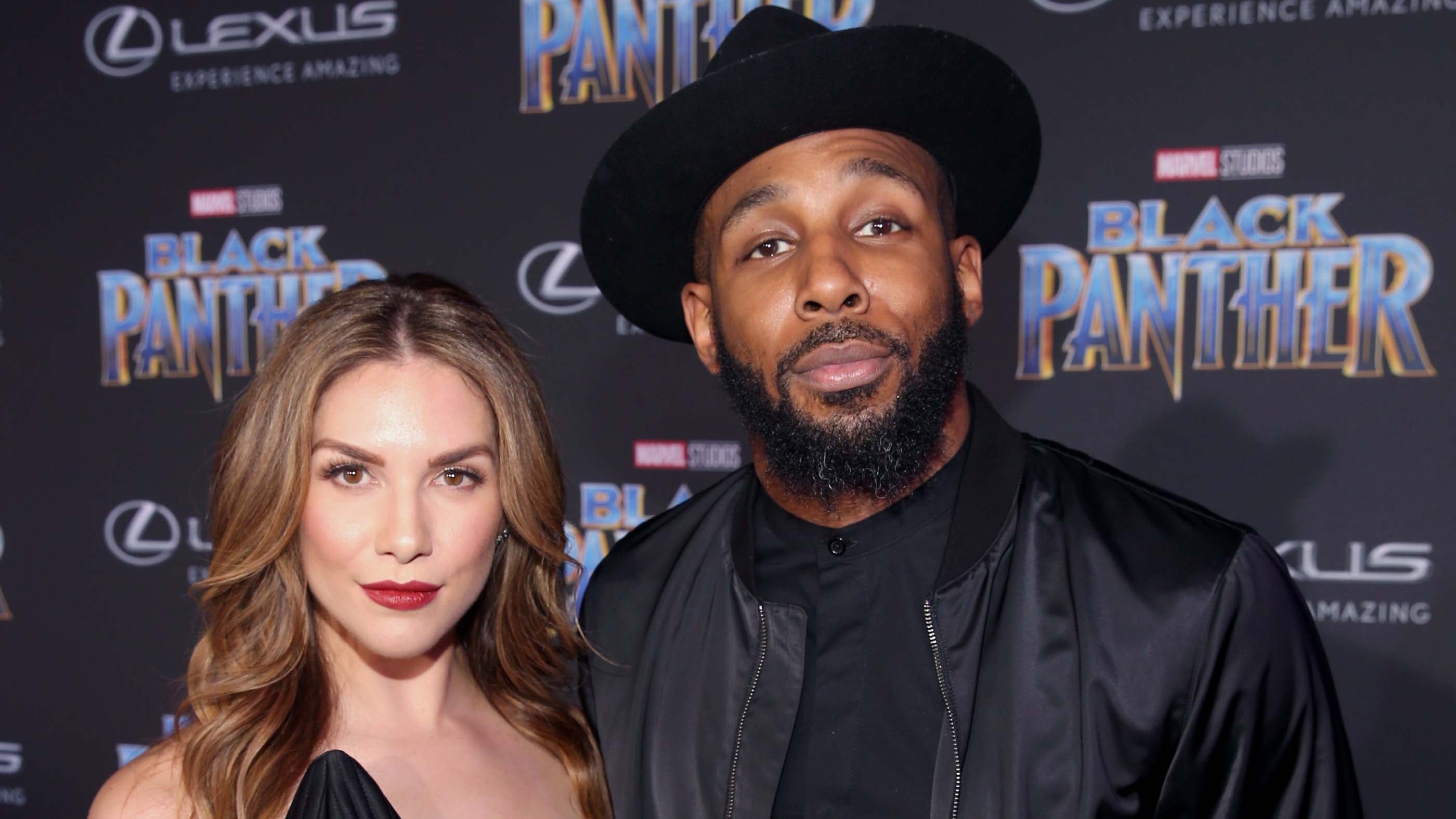