Meghan Markle fanboy Aker Okoye is filling ET in on why he wrote an apology letter to Prince Harry.

On Friday, the 16-year-old left an impression on the Duchess of Sussex after she visited his school, Robert Clack Upper School in Dagenham, in England, in honor of International Women’s Day.

Eager to hear a male perspective of what the day meant, Markle allowed Okoye, the school’s head boy, to join her on stage and share his thoughts. He made Markle laugh after he exclaimed, “She really is beautiful, innit?” He also got to give her a big hug.

The next day, The Sun published an article in which Okoye apologized to Prince Harry, saying “I hope you didn’t mind me cuddling your wife. I was just overwhelmed and shocked to see her arrive at my school.”

ET spoke to Okoye on Monday as he reflected on what he calls “the best moment of my life thus far." He also explained why he penned an apology letter.

“It was probably to clear everything up,” Okoye said. “If that was my wife and I had this random child [hug her] … I don't think he's threatened by it [but] I thought it was polite to do so. It was out of my own kindness. If Meghan Markle wasn't as big as she is, I would still say sorry for that. I just thought it was genuinely polite to do so. It didn't feel as if I was forced into it.”

Although Okoye felt like he should apologize for the embrace, footage of the event shows Markle happily reaching out to hug the teen. At that moment, Okoye was simply “amazed.”

“I almost had to congratulate myself in my head,” he said. “I thought, ‘Well done, you must have done something.’ The response [to my speech was] amazing and I was very, very proud of myself in that sense. Not arrogant -- more bewildered because in the morning, I had no idea she was coming!”

As for whether he planted a reported kiss on Markle's cheek, the teen seemed unsure, admitting the whole ordeal was a whirlwind.

“I remember exchanging pleasantries on one side, but at the same time she did ask me for my name,” he recounted. “I was very excited. My memory is probably a little bit blurred, but whatever the camera says -- the camera tells the truth at this point. She asked for my name [and] she was really, really cool.”

As for his speech, Okoye confirmed it was “very impromptu” and that he did not have the chance to prepare it in advance.

“It was a bit of a blur and it was all kind of happening at the same time,” he said. “It's as if you're in the world and you're not ... it's a funny state I can't really describe. I've done public speaking before, [so] I'm used to that feeling. But I've never had to speak in front of a royal, so that added to the nerves and otherworld-ness.”

And, while it was “extremely nerve-wracking” finding himself on stage beside Markle, Okoye said he feels grateful to have met the duchess and witness the “rare” wonder of her character in person.

“I very much [was] privileged to be in her presence and humbled to be around her,” Okoye added. “It really inspired me that I could get such a positive response out of someone with all of those character aspects. Especially someone I've never met before!”

See more on Markle below. 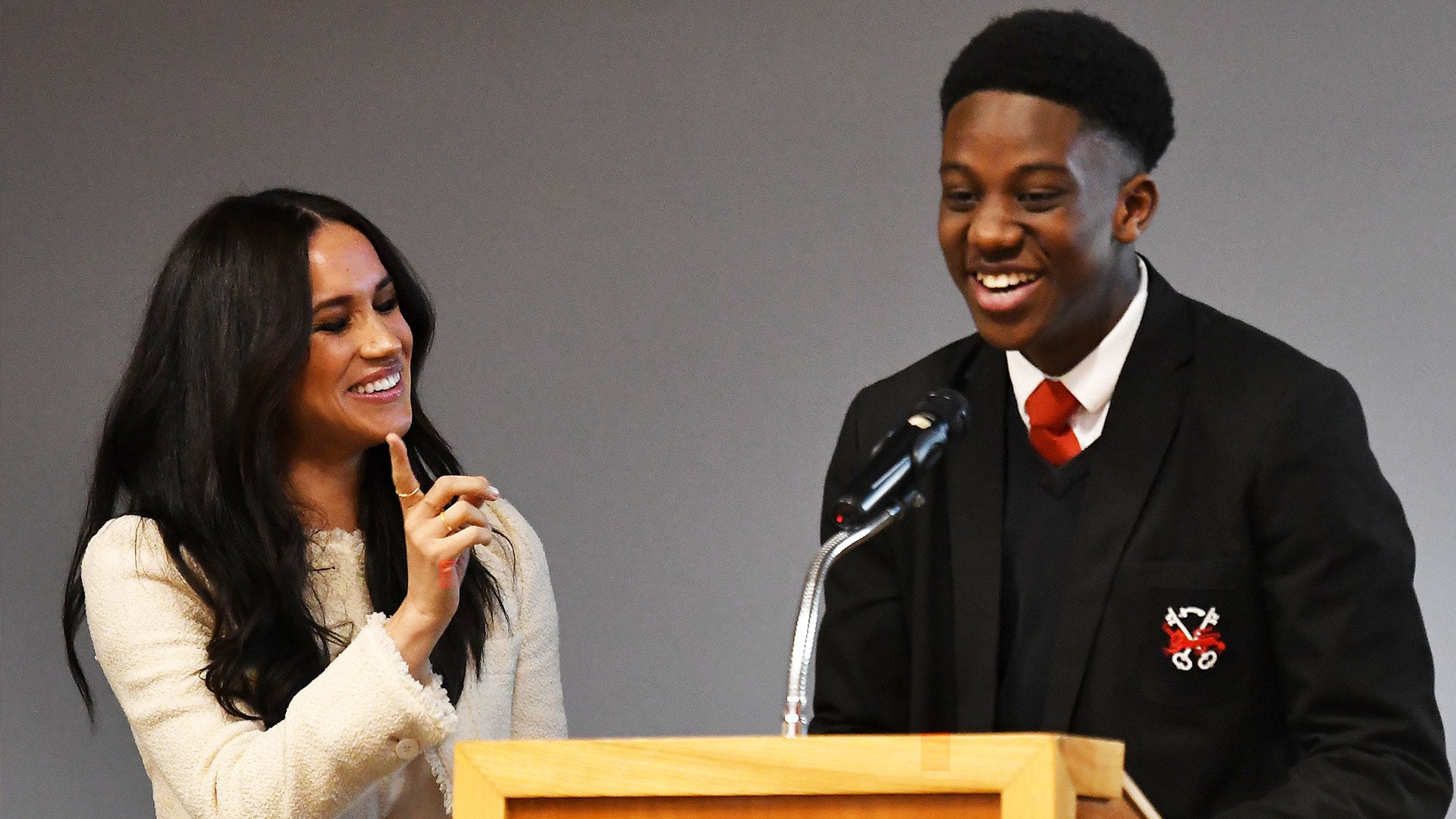