Nestled in a poor Dallas neighborhood, Paul Quinn College aims to be a national model for overcoming poverty

DALLAS — On a recent Sunday night, Paul Quinn College president Michael Sorrell kicked off an hourlong, unstructured group discussion during his problem-solving course with a question.

“What’s on your mind?” he asked the class composed of the school’s top 18 students.

Sophomore LaMontria Edwards promptly asked a question about Sun Tzu’s “The Art of War,” the ancient and seminal Chinese text about war and strategy assigned to the class. She inadvertently launched a meandering discussion that touched on everything from ancient Greek historians to reparations for American slavery and inequality in the modern criminal justice system.

Students then dove into a discussion about Rodney Reed, the Texas prisoner largely believed to be innocent of the murder that landed him on death row and who, at the time, was days away from an execution that has since been halted. Sorrell turned their analysis of the case, catapulted into the national consciousness thanks in part to celebrities’ posts on social platforms, into an impromptu lecture on media literacy.

And from there, he steered the conversation back to the assigned reading and told his students that while Sun Tzu wrote about war, there were other arenas in which to apply the book’s teachings on strategy.

“Take a step back and think about knowledge and experiences,” Sorrell said. “People from under-resourced communities, they have a lived set of experiences but they haven’t yet figured out how to lift themselves out of their [circumstances].”

Paul Quinn College President Michael Sorrell addresses students during his problem-solving class. Students are challenged to find a problem on campus, solve it and present their thinking to him and the rest of the class.

A belief that education can jumpstart the socio-economic mobility of people who grow up in long-neglected neighborhoods influences Sorrell’s teaching — and is what brought him to this historically black college in a poor southern Dallas community in the first place.

Before Sorrell’s arrival in 2007, Paul Quinn College was plagued by mismanaged finances, plummeting enrollment and a looming loss of accreditation — all of which portended the school’s potential closure.

Sorrell showed up as a seasoned attorney, education scholar and, as he described himself, “an activist” at his core. As Paul Quinn’s new president, his plans to turn the institution around were largely underpinned by the idea of making it a work college, a federally recognized school where students are required to hold down jobs and have their professional performance incorporated into their academic studies.

The work college model’s purpose is to be an affordable and flexible alternative to traditional universities. At the time, all work colleges but Paul Quinn were located in rural areas. The school’s location in Americas ninth most populous city made it the nation’s first urban work college and, in many ways, Sorrell’s plan an untested one.

And in 2009, two years into Sorrell’s tenure, the Southern Association of Colleges and Schools voted to strip Paul Quinn of its accreditation, threatening its access to federal and state funding and how its graduates’ diplomas were professionally valued. The vote was a rough blow for the centerpiece of Highland Hills, the southern Dallas neighborhood ravaged by the city’s history of segregation and inequity. 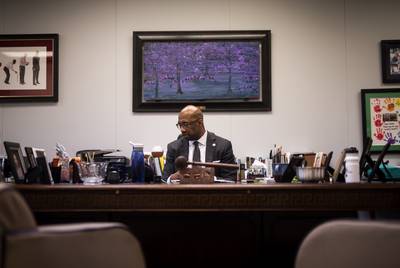 And Sorrell considers a fight against poverty to be integral to Paul Quinn’s mission. After arriving, Sorrell had abandoned buildings torn down and admission requirements heightened.

Yet the most fundamental change was transitioning the school to an urban work college. Every student is required to have a job in addition to their course load. In their first year, students typically work a job on campus. They are expected to work a professional internship by their junior and senior years.

Elizabeth McRae, who is majoring in legal studies, said there are unspoken expectations for corporate work and her internship helped her adjust.

“To be quite honest, when I learned about the work program, I wasn't as thrilled… but as I got involved in my internship… I realized that corporate is a whole different world,” McRae said.

Aden Jemaneh, a business administration major and consumer banking intern at JP Morgan Chase, said her parents never wore a suit and tie to work and professional customs can be foreign for people who have never been exposed to them.

“It’s very new to you whenever you’re not coming from a family that works in a corporate setting, or where the standard of success is not a businessman or business woman,” she said.

The noisy shuffle or outdoor lounging associated with state schools are minimal on the lawns of Paul Quinn. Students are largely tucked into the red-bricked library, the campus chapel, the administration building or the student union, all of which make up the center of the walkable campus.

The dual emphasis on work and studies puts Paul Quinn squarely in the center of the age-old debate over the best avenue for economic mobility: expansive liberal arts or transferable work skills?

“Let's do both,” Sorrell said. “Let's make sure you understand how you create a path forward economically for your family while also making sure that you have the capacity to participate intellectually at the highest level.” 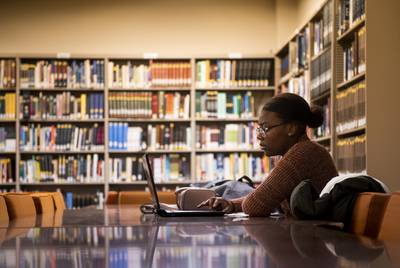 Sorrell, whom students refer to as “Prez,” said this model minimizes loan debt for students and makes affordability a priority for the college. Additionally, the school’s courses are taught using publically accessible textbooks so students don’t have to pay their often exorbitant costs.

Paul Quinn also emphasizes support services that help students navigate obstacles that may not be directly tied to their classwork, like a free clothing closet to help students build their professional wardrobe.

In 2010, Paul Quinn ended its football program and converted the field into an urban farm where they grow produce to feed the campus and surrounding community.

As 2020 democratic presidential candidates publish plans to address a national student loan debt crisis, Sorrell said Paul Quinn has cut tuition costs by 40%, from $23,800 to $14,275 to keep the school affordable for poorer students.

“In the history of mankind, how many revolutions do you know that are started from above,” Sorrell said.

Edwards, the sophomore who asked about “The Art of War” grew up in nearby Pleasant Grove, also in southern Dallas. A first-generation college student, Edwards said she spent her childhood witnessing drug deals and experiencing homelessness.

Edwards said her mental health was one of the toughest obstacles to succeeding at Paul Quinn, so she took advantage of free access to a counseling center in the student union.

“I had to learn that everybody wasn't my enemy because coming into this school, even though I'm only 15 minutes from where I lived, I was still afraid. I had to learn that people really do love you when they say they love you,” Edwards said. 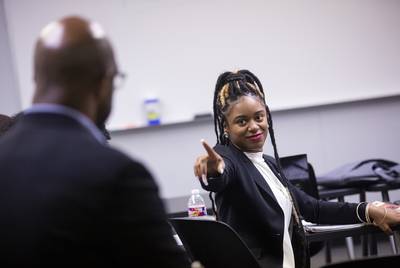 McRae, a white woman, said she is a minority at Paul Quinn on paper but doesn’t feel like one on campus. She said that Sorrell, other administrators and professors focus on every student’s personal development, regardless of their background, race or ethnicity.

McRae also said attending a historically black college or university gives her a different understanding of cultures other than her own, which she thinks will be an advantage in her professional career.

“You know, we're not taught black culture in school…I may not get that education anywhere else,” McRae said.

Esnold Jure is studying political science and hopes to return to Haiti where he grew up with solutions to the country’s political crises. Jure said he is motivated by the high standard set by Sorrell and Paul Quinn faculty.

“My challenge is to strive to meet his expectations,” Jure said.

Andrés Castro Samayoa is an assistant professor at Boston University and researches the use of social identities in higher education policy. Samayoa said Paul Quinn is unique because its administration constantly balances education, affordability and support for students.

Samayoa called the football-field-turned-farm an example of the college’s approach to building a school around students. Samayoa considers this an emerging practice in higher education. He also credits the school for trying to address the needs of the surrounding neighborhood.

“The fact that Paul Quinn finds itself in a food desert is evidence that the decision to make an urban farm is an attempt to address that,” Samayoa said.

Mike Rawlings was the mayor of Dallas during Paul Quinn’s roughest patches and said despite its challenges, the school was a “strategic partner” in his efforts to spur economic growth in southern Dallas.

“Paul Quinn and Dr. Sorrell have shown us how you can be really creative in the education space and you don't have to do the same template over and over again. Especially for kids that don't have a lot of options,” Rawlings said.

Sorrell said his first heroes were Charles Hamilton Houston and Thurgood Marshall. Houston was a black attorney and the NAACP’s first legal affairs director who litigated some of the most foundational cases to American civil rights.

Marshall successfully argued Brown v. Board of Education, the landmark U.S. Supreme Court school desegregation ruling, and went on to become the first black justice on the high court.

“The idea I got of taking institutions designed for one thing and bending them to accomplish something greater — that came from them — and by institution, I don't mean Paul Quinn, I mean higher education,” Sorrell said.

Before 2009’s vote to pull the school’s accreditation could be implemented, Paul Quinn got an injunction to stop the decision and changed its accreditation to the Transnational Association of Christian Colleges and Schools.

Since then, the school’s enrollment has grown from 200 students to 550, according to college marketing materials.

In 2011, Sorrell told the Texas Tribune his enrollment goal was 2,000 students by next year. Eight years later, Sorrell said the school has discovered that 1,200 is an ideal capacity for Paul Quinn to “scale the small college experience.”

Last year, Paul Quinn launched its first remote campus in Plano, a prototypical affluent Texas suburb. In contrast to Highland Hills, roughly half of Plano’s residents are white and their median household income is $90,000.

The Plano outpost allows students to intern with companies like NTT Data and JP Morgan Chase.

Sorrell said after the vote to strip the school of its accreditation, he got on his knees to tell God that he had done all he could to save Paul Quinn and that whatever happens next must be His will.

However, Sorrell said he cries now for different reasons.

“The things that break my heart now are my experiences as seen through the eyes of my students…When I interact with my students and I see the margins in which they are forced to live, I don't know if I cry as much as I get up off of my knees and start swinging,” Sorrell said.

After her time at Paul Quinn, Edwards aspires to earn a master’s and doctorate in education and government. Currently, she works as the student liaison between the Dallas Entrepreneur Center and Paul Quinn. Edwards plans to use the non-profit she founded, “Mirror Maddness” to teach entrepreneurship and cultivate mental stability for people living in poverty.