Testicular cancer survivor now works to fight it with others

SAPD: Woman, toddler killed in two-vehicle crash on Southeast Side

Published: January 2, 2020, 12:01 am
Tags: Politics
In a brown building, next to a vacant industrial site, Abilene Hope Haven operates a housing assistance program and homeless shelter in Abilene. Gary Rhodes for The Texas Tribune

STEPHENVILLE — No one knew Billy Ray “Shaggy” Hagen was homeless until the janitor arrived early one morning and saw him sleeping on the floor of St. Luke’s Episcopal Church.

The 27-year-old had lost his job at a pizzeria and, after having problems with his roommates, left the house where he was living with nowhere to go.

“I’ve heard that some churches leave their door unlocked at night,” Hagen said.

The janitor told a few people at church that the man was homeless. Hagen eventually told some friends. But for the most part, people in this rural town of 20,797, one hour east of Fort Worth, never realized the man walking alongside them on sidewalks and hanging out with them at neighborhood bars had no home.

“I would pretty much hide in plain sight,” Hagen said. “I showered at a friend’s house whenever I could. I would clean my clothes at the laundromat. No one would know if I wouldn’t tell them.”

Last year, Gov. Greg Abbott spotlighted homelessness in Texas urban areas after battling with Austin's mayor over tent policies and services for those in need. Meanwhile, rural Texas is experiencing a surge in homelessness, and it lacks many of the resources the big cities have to cope.

“In the last few winters, the number of people coming in to ask for help have gone up here,” said Sherry Carroll, director of Grace Place Ministries in Stephenville.

Big cities are much more likely to have homeless shelters, millions in federal funds and networks of nonprofits.

But because sparsely populated areas lack the resources to find and help people experiencing homelessness, churches and faith-based organizations become one of their few lifelines.

Juan Pablo Garnham and Gary Rhodes for The Texas Tribune

“People might live in a home, but the housing might be substandard. Or they might live in their cars or at their workplace,” said Abraham Benavides, a public administration professor at the University of North Texas who is training 24 rural counties on homelessness solutions. “Homelessness in rural areas is masked.”

That leaves rural organizations struggling to find and keep track of people without a home.

“Today we have two or three, tomorrow we might have none. We don’t know where they go. And we want to help them,” Carroll said.

"Nobody thinks about us"

According to the The Texas Homeless Network, the nonprofit that coordinates homelessness support efforts across the state, it is becoming harder to find affordable housing in rural areas.

“In the last year, we've had a lot more interaction with communities that are more rural, who have been telling us that homelessness is an issue there,” said Sophia Checa, the network’s director of continuum of care programs. “We're seeing the same reasons as in urban areas, which is not a lot of affordable housing and stagnated wages. People just can't afford to pay for housing.”

In Stephenville, Tarleton State University students rent most of the available apartments and houses, which leaves low-income residents with fewer places to lease. 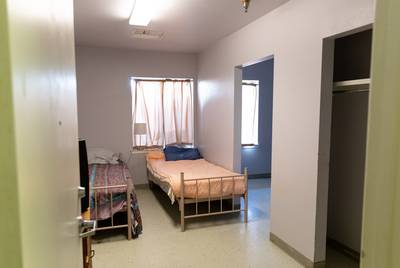 An empty dormitory room at the Abilene Hope Haven shelter in Abilene. Gary Rhodes for The Texas Tribune

“In our community, we have a higher rate of poverty than the state as a whole and housing is expensive because of the college,” Carroll said. “Landlords know that they can get money from the students and there is very little affordable housing.”

In Stephenville, the local churches and community have gathered together and created an organization called Homelessness HELP that pulls resources together and keeps track of people without homes.

The group paid for Hagen to spend a night in a motel in the middle of summer.

“It was a break from all of this,” Hagen said. “For one night I didn’t have to worry about anything. I had AC, I could take a long shower and a nap.”

But that isn’t something that Homelessness HELP can routinely do.

“We can only help with one night every seven months,” Carroll said. “We don’t have more money, so that’s the policy.”

Forty miles north in Mineral Wells, James Rhodes relies on Fort Worth supermarkets to donate the groceries that stock the food pantry of New Haven Ministries, an organization he directs that provides food, clothes and shelter to people in need.

“The problem with rural areas is that nobody thinks about us. There’s no resources, and we have to do a lot with what we can get,” Rhodes said.

He oversees volunteers who help him organize, pack and distribute food. New Haven doesn’t receive any state or federal money. Rhodes doesn’t even know where to go or how to apply for the funds that bigger cities get.

Rhodes has identified around 60 people who experience homelessness in this town of 15,000.

“I think the need is getting greater,” he said. “I have no idea why it’s happening, but I have seen an increase in people coming out to ask for our help.”

One financial emergency is all it takes

With 121,000 residents, Abilene is much bigger than Stephenville or Mineral Wells. It has more charitable organizations than smaller towns have.

But small and medium-sized cities like Abilene often struggle with finding housing and welfare services for people experiencing homelessness. And while there are more people needing such help than in less-populated rural areas, it’s still hard to identify who may be living without a home. 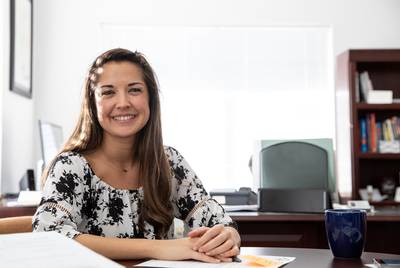 Katherine Bisson is the executive director of Abilene Hope Haven. The charity has retooled itself and its approach to the issue of homelessness in Abilene in recent years. Gary Rhodes for The Texas Tribune

“They don’t camp in front of a business, because they know they would get in trouble,” Bisson said. “So they live in cars and abandoned buildings, and they are really difficult to find.”

Her group follows what’s called the “housing-first” approach to homelessness, which prioritizes getting a roof over someone’s head before trying to solve problems like unemployment, mental health or substance abuse.

Although more apartments are available than in the deep rural areas, finding a home at an affordable price can be difficult. And for many, a financial emergency like losing a job can trigger homelessness.

That’s what happened to Francis Castillo, who was laid off from her job at a cracker factory in Abilene.

“I got evicted, I lost my apartment, I lost everything,” she said.

Unemployed and sleeping in her old Toyota Camry, Castillo struggled with anxiety and depression. But she managed to get a room at Abilene Hope Haven. There, she received mental health services and they helped her finding a job at a bakery. 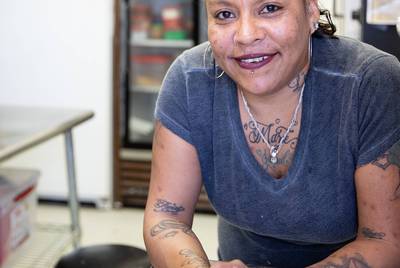 Francis Castillo poses for a portrait at the bakery where she works. Castillo, who is living at the Hope Haven shelter, has recently gotten everything she needs to seek out housing of her own. Gary Rhodes for The Texas Tribune

Hope Haven is now helping her find an apartment that will let her use federal funds to subsidize the rent.

“Finding a one bedroom to rent in this city is a huge challenge,” Bisson said.

John Meier is in charge of veteran services at the West Central Texas Regional Foundation, a nonprofit that offers everything from education and housing services in 19 counties. He thinks getting the chronically homeless population in Abilene to a functional zero is possible if residents help identify people in need and government officials provide funding.

“It’s really easy to say ‘those people’ instead of realizing that they are like me,” Meier said. “A lot of times or politicians and community leaders aren’t really engaged with the people that need these services.”

Five years ago, Michael Landers lost his job in Fort Worth. He didn’t have savings or relatives who could help him. He spent two years with his wife and kid sleeping in a car and in hotel rooms.

“The shelters in the city were dealing with so much more, so they have to separate the women and men, which we didn’t want to do,” Landers said.

He and his wife found out about the shelter in Mineral Wells online.

At that town’s shelter, the Landers family got a bedroom with a bunk bed. Their son would sleep on the top, Landers and his wife on the bottom. The shelter also helped him get his driver's license back, and he found work as a commercial truck driver.

“This was a smaller community,” Landers said. “They know your name, what you need. In the larger shelters and in larger cities, you are not going to have that.”

After six months in the shelter doing odd jobs, he managed to find a stable job as a truck driver and now they live in the Fort Worth suburb of Euless.

“We forget that smaller communities can be a solution,” said Checa of the Texas Homeless Network. “They may be small, but they are mighty, too.”

Hagen, once found sleeping in the Stephenville church, also found a job. He is a welder and now has a one-bedroom apartment. Stephenville organizations helped with the first month’s rent.

“Just in time for the winter,” he said.

Slowly, he’s furnishing the apartment as he can. Some church congregants gave him a couch and still haven’t forgotten the guy who sought shelter in their building.

“They call me every Monday,” he said.