Amanda Edwards lost a family member to gun violence. But unlike Beto O'Rourke, she doesn’t want to "take your AR-15."

Published: February 11, 2020 12:01 am
Tags:
Politics
Democratic U.S. Senate candidate Amanda Edwards says her views about guns — as well as other issues like health care and education — are guided by a mix of personal experience, what’s practical for Texans and what realistically has a chance of passing into law. Angela Piazza for The Texas Tribune

From the backseat window of her mother’s car, 8-year-old Amanda Edwards studied the pavement on a familiar street in Houston’s Northside.

Just a few days earlier, in December 1990, Edwards’ older cousin Reggie Mason was shot and killed — his sneakers and Starter jacket stolen from his body.

Edwards’ relatives wanted to see for themselves the spot where their beloved family member died. As Reggie’s sister pointed to where his body was found, what first seemed to Edwards like a bad dream suddenly became real.

Now 38 and jockeying to win Texas’ Democratic primary for U.S. Senate, the former Houston City Council member holds the memory close as she grapples with the lasting effects of gun violence and how best to prevent it.

Edwards rarely talks about her family’s loss in public statements, but she recently opened up about the experience in an interview with The Texas Tribune. She may not be the loudest or most progressive voice on gun control, but she said she has strong convictions about public safety and firearms that have been informed by personal tragedy.

“[Reggie’s death] gives me a different perspective of the realness of … gun violence, like what happens in real life as opposed to it being someone else’s story,” Edwards said. “We’ve lived through that, we know what it’s like to see that person buried, and there is no coming back. They’re gone. It’s permanent.”

In the wake of at least two mass shootings in Texas over the past year, gun control has emerged as a flashpoint for Democratic voters. During his failed presidential campaign, Beto O’Rourke, who continues to cast a shadow over the Senate primary, fanned the flames after a mass shooting in his hometown when he famously declared, “Hell yes, we’re going to take your AR-15."

While the issue also carries deep personal weight for Edwards, she has taken a different approach. Edwards said her views about guns — as well as other issues like health care and education — are guided by a mix of personal experience, what’s practical for Texans and what realistically has a chance of passing into law.

“I do think you're going to run into an area of space where … [mandatory buyback programs] will become the dividing point,” said Edwards, who instead supports universal background checks and other restrictions. “And then if you're trying to do this comprehensive measure, it could tank a bill.”

Edwards’ mother and grandmother helped raise Reggie, so growing up, he was more like a big brother than cousin. He doted on his younger family members and loved to teach the older ones how to dance. When Reggie died at the age of 24, it was heartbreaking for everyone, Edwards said.

“He was the apple of everyone’s eye,” she said. “When he came over, everybody would be happy.”

Police never arrested anyone in connection with Reggie’s death, and Edwards’ family knows little about what happened the night he died.

Speaking in Houston last April to family members of unsolved homicide victims, Edwards called on the community, police and government to end the cycle of “senseless violence.”

“Losing your loved ones to violence is never easy, but it is particularly difficult when you don’t have answers,” Edwards said at the event. “We have to change the … culture of gun violence. Our federal government has failed us in how our gun policy works in our country.” 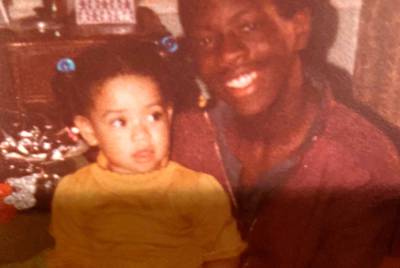 As an at-large member of the Houston City Council, serving one term beginning in 2015, Edwards represented 2.3 million constituents in the nation’s fourth-largest city. During her term, the Harvard Law School graduate and former attorney led citywide initiatives to develop technology, innovation and public transit.

She also channeled her personal experience with gun violence into improving the relationships between Houston’s police and its most underserved community members.

“We have to have the resources in place so you can … work hand in hand with law enforcement instead of it being an antagonistic relationship, where the law enforcement can’t tell the difference between Miss Johnson’s grandson and someone who’s come to do Miss Johnson wrong,” Edwards said at the April 2019 event. “The way you tell the difference is if you know that community, am I right?”

Edwards urged community members to cooperate with law enforcement by speaking up if they know something about a crime. It was a strong message that helped officers solve more of the city’s violent crime cases, said Troy Finner, executive assistant chief of the Houston Police Department.

Now running in a crowded primary to unseat Texas’ Republican Sen. John Cornyn, who is expected to sail through his own primary, Edwards largely campaigns on her ability to improve Texans’ access to health care while touting her boots-on-the-ground leadership in the wake of Hurricane Harvey. Should she win, Edwards would be the first African American Texan to serve in the U.S. Senate.

Recent polls show large numbers of Texas voters are still undecided about the 12-way race, and only 4% say Edwards is their first-choice candidate. During the most recent fundraising period, Edwards brought in $250,000, including a $35,000 loan to herself, putting her in fourth place among the other contenders.The primary election is March 3, and early voting begins Feb. 18.

Edwards’ proposals are moderate compared with those of some of her primary competitors — but she said they stand the best chance in a Republican-controlled Senate.

When she jumped into the race in July, Cornyn’s campaign manager called Edwards “a true progressive with a record that would make Elizabeth Warren jealous.” At a recent Texas Tribune event, Edwards said she admires Warren and even worked with her on health care policy at Harvard Law, but she dismissed the notion that all their policies are the same. She also publicly agreed with an assessment that politically, she’s more of a Joe Biden than an Elizabeth Warren.

Edwards, whose father died from cancer when she was a teenager and whose mother has cancer now, supports building on the Affordable Care Act and protecting a public option for Texans who want it. But she does not support Warren’s and Bernie Sanders’ more progressive pitches for “Medicare for All.”

And while Edwards has been personally affected by gun violence, her approach to prevention is similarly grounded in what she thinks is the best solution with the most realistic shot at passage.

In previous media interviews throughout the campaign, Edwards has been restrained in how she talks about gun reform, making it clear that she's against mandatory buybacks while expressing a preference for other "restrictions." When pressed by The Texas Tribune, Edwards said she does support voluntary buybacks and a ban on new sales of assault weapons.

Edwards, however, would rather talk about her support of universal background checks, a ban on high-capacity magazines, and “red flag” laws. She said it's important for Texas' next U.S. senator to pursue policies that have consensus among Democrats and Republicans alike.

Among the other Democrats vying to unseat Cornyn, at least two contenders — Chris Bell and Cristina Tzintzún Ramirez — have fully aligned themselves with O’Rourke on mandatory buybacks. Meanwhile, MJ Hegar has rejected the former El Paso congressman’s stance.

“We try to be ruthlessly practical about what’s a good fit for Texas, and at this point, mandatory buybacks are not a thing that we feel like could work,” Switzer said. “In Texas, probably more than in other states, we have to carve out things that would save lives and are significant but are not nonstarters.”

Although Edwards has mostly tucked away what happened to Reggie, 30 years later, she is still haunted by the memory of seeing where he died.

“I just remember my cousin, Reggie’s sister, saying, ‘This is where his body was laying,’” Edwards said. “I remember that very well. Today, I could take you to the same street and show you what she showed me. Some of those things you are never going to forget.”