Joe Biden has long held a lead with black voters in Texas. Will they stick with him?

Published: February 28, 2020, 12:01 am
Tags: Politics
Damien Jones, a member of the Texas Coalition of Black Democrats, is reconsidering his support for presidential candidate Joe Biden. Casey Jackson for The Texas Tribune

He liked the former vice president’s experience: Biden has “been in the situation room,” Jones said recently at a Coalition of Black Democrats fundraiser inside the spacious living room of a home in one of the state’s most diverse neighborhoods. “He’s been a longtime statesman for this country.”

But with early voting underway in the Texas Democratic primary, Jones sheepishly acknowledged that he’s now an undecided voter.

As the 35-year-old Air Force veteran joined his wife and roughly a dozen other attendees in sipping lemonade and nibbling on tea sandwiches, the chair of the coalition delivered an off-the-cuff speech about the importance of getting black voters to the polls. But a question lingered over the room: Would a majority of those voters rally around a single candidate before Super Tuesday?

For months in the run-up to the Democratic primary, polls have indicated that Biden was the favorite among black voters here. And that support was a key factor in Biden’s consistent lead in the statewide polls. But Biden suffered poor performances in the early states of Iowa and New Hampshire and finished a distant second in Nevada, and his lead in Texas polls has disappeared.

Now many black voters in Texas and beyond are wondering aloud whether to look elsewhere. If they do en masse, it could effectively end his campaign.

For Jones, there are policy considerations. Biden, he said, toed the line too often and didn’t stand as tall as Bernie Sanders on criminal justice reform, a top issue for Jones. And then there are electability concerns. Biden has taken a tumble in the polls, and Jones felt the candidate hadn’t made a concerted effort to reach out to voters like him.

“Even though he says stupid stuff from time to time, I said I was going to stick with him,” Jones said. “But his performances have been lackluster, and I haven’t seen any real groundwork from his team.”

In some ways, Biden has suffered because of the racial makeup of the early states. The first two states in the primary process are overwhelmingly white, and Biden finished in fourth and fifth. In Nevada, which is more diverse than the first two early states, Biden finished in a stronger position, but still a distant second to Sanders. Next up is South Carolina, where the U.S. Census Bureau estimates black voters made up roughly 28% of the total electorate in 2018. Biden has consistently been the frontrunner there, and his campaign hopes he’ll gain momentum heading into the 14 Super Tuesday states, including delegate-rich Texas, where black voters made up 13.5% of the total electorate in 2018.

But as Biden’s support softens in national and statewide polls, there’s a ripe opportunity for other campaigns to parachute into the state. And unlike in 2008 and 2016, there are a variety of viable candidates to choose from.

by Casey Jackson for The Texas Tribune

In recent months, myriad politicians — including President Donald Trump — have ramped up targeted outreach campaigns to black Texas voters. Michael Bloomberg, for example, kicked off a “Mike for Black America” initiative in Houston, while Sanders’ national campaign co-chair Nina Turner did a Houston trip focused on outreach to black voters, according to his campaign. Writer Jamilah Lemieux also hosted a series of historically black college and community events for Elizabeth Warren’s campaign in Texas. And the regional director for Pete Buttigieg’s campaign attended the Coalition of Black Democrats’ Houston fundraiser.

“Biden does not have a monopoly on the black vote,” said Meme Styles, a community leader in Austin who is wavering between Warren and Sanders. “Just because he was the vice president with Obama does not qualify him as the candidate for black America.

“We need someone who is going to go head to head with Trump and who’s good at verbal judo. Biden hasn’t proven himself to be a martial artist yet,” she said.

The black voting bloc is among the most highly sought after in the race to clinch the party’s nomination. In Southern states especially, black voters make up a sizable portion of the Democratic electorate; the thinking goes that if a candidate can get large vote margins with black Democrats, he or she will hold a major advantage.

Recent interviews with more than a dozen black voters, organizers and fundraisers across the state paint the picture of an electorate whose primary concern is electability: Most said they would rally behind whichever candidate they felt could make the best case against Trump. Some also said they were impressed that so many candidates were aggressively courting black voters in ways they hadn’t seen before.

“No Democrat can be the nominee without the support of black voters,” said Royce Brooks, the executive director of Annie’s List, the statewide organization that works to elect Democratic women who support abortion rights. “Campaigns should already not just be reaching out, but comprising their staff and teams of black people and advisers up to the very senior levels to be able to authentically speak to the issues that we care about and to reach us where we are.”

The crowded primary has been bruising for Democrats courting similar voting blocs and has made even small blemishes on their voting records or moments of perceived inauthenticity stand out more clearly.

Biden in particular has struggled to shore up support in the South among younger, more progressive black voters who see themselves better represented by a Sanders- or Warren-type progressive. Those voters, including Shuronda Robinson from Austin, are less moved by Biden’s traditional means of politicking. Instead, they seek a candidate hoping to usurp the traditional establishment.

“I have an affinity toward Biden because he’s been ‘Uncle Joe,’” said Robinson, who said she’s supporting Warren. “But his campaign just doesn’t excite me.”

Antron Johnson, a 31-year-old political consultant at the Houston fundraising event, said Biden has caused some of his own problems. He cited a recent gaffe in which the 77-year-old called a young woman who questioned his finish in Iowa a “lying, dog-faced pony soldier.”

First: Supporters of Democratic presidential candidate Mike Bloomberg gather for a campaign event at the Buffalo Soldier Museum in Houston. Last: Bloomberg takes selfies with supporters at the event.

Casey Jackson for The Texas Tribune

Biden seems aware that he has his work cut out for him with black voters. He flew to South Carolina to mobilize black support before the polls even closed in New Hampshire. In Texas, he attended the National Baptist Convention’s midwinter board meeting in January in Arlington, where he spoke to a predominantly black audience. On Monday, he’ll hold a community event at Texas Southern University, one of the largest historically black universities in the country.

“Some mornings that I wake up, I wonder whether or not we are living in 2020 or 1920,” he told a crowd at the Arlington event, according to the Fort Worth Star-Telegram. “I hear the voices of intolerance singing the chorus of hate, intolerance.”

During this week’s Democratic primary debate, Biden added that he’s “worked like the devil to earn the vote of the African American community.”

To be sure, Biden does have support from some prominent black Texas leaders. U.S. Rep. Marc Veasey, D-Fort Worth, an early Biden backer, said last weekend on CNN that black voters “here in the state of Texas — they will not forget that Bernie Sanders threatened to primary President Obama in 2012.”

But Carroll Robinson, the chairman of the Texas Coalition of Black Democrats, said Biden “took his support among black voters for granted, and his outreach wasn’t as assertive as, say, Bloomberg.”

“Black voters are going to come away from Nevada and South Carolina with a clear picture of who the nominee is likely to be, and folks want to be with a winner,” he said. “If Biden doesn’t perform well, black voters in Texas are going to move on.”

Still, there’s no clear indicator of whom they’d move on to — or how many voters will stick with Biden in the end. The black vote is not monolithic, a fact reflected in recent polling about the crowded primary: 33% of black Democratic voters in a February University of Texas/Texas Tribune Poll said they supported Biden (down from 38% in November), compared with 12% who backed Sanders and another 12% said they supported Warren. Eight percent said they supported Bloomberg, and another 7% backed Tom Steyer. 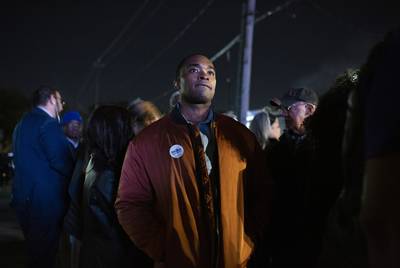 Steve Robinson, 44, waits in line for a Mike Bloomberg campaign event at the Buffalo Soldier Museum in Houston. Casey Jackson for The Texas Tribune

Some national polls have suggested Sanders is making the biggest inroads with black voters, which supporters attribute to the fact that he’s had several years to hone his pitch to the electorate since losing the nomination in 2016.

“I support his movement and what he’s doing,” Jones said of Sanders. “He’s been talking the loudest on holding Wall Street accountable and taxing billionaires. He’s been talking about that way before it became popular.”

Warren has picked up on that, Jones quickly added, “but Bernie was first.”

Sanders is “a fighter, and as far as his black agenda — when he talks about free education? Let me tell you something, honey, that spoke values to me,” she said.

Warren has also sought to make gains in the state, particularly with women and younger black voters.

“I watched her go to Mississippi and talk to really poor black communities about housing and infrastructure issues, and I hadn’t seen that at that level in a campaign recently,” Shuronda Robinson said. “Her record and understanding what it takes to have a healthy, capitalistic system makes sense to me.

“I think it’s time for a woman, and she’s smart and she’s passionate,” she said.

In Texas, however, Biden’s biggest competition for black support might be Bloomberg, the former New York City mayor, who is spending heavily in the delegate-rich Super Tuesday states, including Texas. While Biden picked up the most endorsements early on from black and Hispanic members of Congress and congressional Democrats overall, a national Quinnipiac poll showed Bloomberg’s support among black voters sharply increasing while Biden fell.

Houston Mayor Sylvester Turner recently backed Bloomberg for president, a nod of support from a revered black politician who hadn’t previously endorsed in the race.

Johnson, the political consultant, described himself as a “Bernie guy” but said that “Bloomberg has started to catch his attention” despite recently recovered audio in which the billionaire is heard defending the racial profiling used in “stop and frisk.”

Bloomberg has been aggressively courting black voters, spending heavily on advertising and campaigning across the state. He’s also one of few candidates who have made their pitches to Texas voters in person during a time when a majority of Democrats have zeroed in on the four early states.

“Think about real life: If you don’t court that young man or young woman, then there’s no basis for them to acknowledge or reciprocate,” Carroll Robinson said. “Bloomberg’s letting black voters know assertively he’s interested, and there’s a segment that’s reciprocating.”

Still, not everyone is bowled over by Bloomberg’s mass spending.

Back at the Houston event, Jones called Bloomberg’s candidacy a “travesty” and said he was waiting to see how Biden performs in South Carolina — as a harbinger for his ability to perform in the rest of the South.

Although he hoped for a first-place finish in the state, Jones said he’d consider a second-place win, too.

If Biden falls any lower?

Disclosure: Annie’s List, Texas Southern University and the University of Texas have been financial supporters of The Texas Tribune, a nonprofit, nonpartisan news organization that is funded in part by donations from members, foundations and corporate sponsors. Financial supporters play no role in the Tribune's journalism. Find a complete list of them here.