5 warnings, 2 watches and 4 advisories in effect for 28 regions in the area

Early last month, Dallas resident Susan Carson had a biopsy conducted on her lip. Her fears were confirmed — the spot was squamous cell carcinoma, a fast-growing form of skin cancer.

At the time, her doctor told her they should remove the cancerous spot as soon as possible. The cancer is most often not deadly, but it’s known for spreading aggressively.

A few days later, however, her doctor’s office still hadn’t scheduled the appointment. She called back again last week, and the office said it wouldn’t reschedule her surgery because of concerns about the potential spread of COVID-19.

Responding to the coronavirus pandemic, Gov. Greg Abbott last month signed an executive order urging medical providers to cancel and postpone appointments and procedures that aren’t urgent, in an attempt to slow spread of the disease and preserve medical resources. 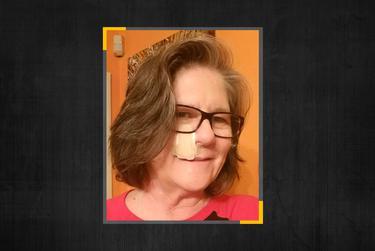 Susan Carson of Dallas wears a bandage from a previous surgery to remove skin cancer, but when a recent biopsy came back cancerous, the doctor's office refused to schedule her surgery. Courtesy of Susan Carson

Now, oncologists and cancer patients in Texas are having to choose from the lesser of two dangers: continue treatment which could weaken their immune systems and make them more susceptible to infection, or leave the cancer untreated and bear the risks of the disease they already have.

Carson, 66, is frustrated that the choice isn’t even hers to make.

“This wasn’t an elective surgery,” said Carson, who has previously battled other forms of skin cancer. “It wasn’t like I was trying to get a facial or plastic surgery …The more it grows, the deeper it’s going to get, and the more they’re going to have to cut my skin out [later].”

Since Carson’s skin cancer isn’t as high-risk as melanoma, she said the doctor’s office told her she was “second in line” in priority for surgery.

“Since I'm not high priority, they’re just going to put me on the back burner,” Carson said. “I'm on a long list of other people who need surgery.”

Dr. Debra Patt, vice president for policy and strategy at Texas Oncology, which treats about half of Texas’s cancer patients, said oncologists are weighing the risks for a vulnerable group of patients. To mitigate some of the risks cancer patients and clinicians face, Texas Oncology has decreased patient volume at its clinics by 80%, postponing some visits and moving other consultations online.

Decreasing the number of visitors entering clinics creates a safer environment for those cancer patients who must show up for life-saving treatment, Patt said. It also promotes staff safety, an essential precaution to prevent transmission of COVID-19 from workers to cancer patients.

Many patients, however, can't afford to put a pause on treatment because they receive chemotherapy to kill metastasized cells. Chemotherapy can cause a decrease in white blood cell counts, resulting in a weakened immune system.

Patients with active cancer risk adverse outcomes or even death if they stop treatment, Patt said.

"It's tricky, honestly," Patt said. " We struggle with, how do you manage this risk and still continue to treat patients that need it so they have good outcomes?"

Some patients are making the choice to delay their own treatments, concerned about the danger of catching COVID-19 while at a medical office full of sick people.

Bonnie Nelson Landry, 74, who lives in Flower Mound with her daughter, had to choose between finishing treatment for her Stage 2 colon cancer or putting a pause on chemotherapy and radiation in hopes of a stronger immune system.

“Of course, you never want to stop treatment,” said Sheila Larson, Nelson Landry’s daughter. “Because of what’s going on, she had no chance. It was more risky to potentially catch the coronavirus as opposed to risk the cancer.”

Per her doctor’s guidance, Nelson Landry stopped treatment. She was supposed to have two and a half more weeks of chemotherapy and 12 more radiation treatments.

Other cancer patients are being redirected away from their regular doctors and medical centers.

Tanya Ehret had been getting chemotherapy at the Mays Clinic at the MD Anderson Cancer Center in Houston. The clinic canceled chemotherapy at that location, redirecting Ehret and other patients to regional locations.

Ehret is able to continue chemotherapy treatment in League City. But her doctors canceled a procedure to repair a tear in her shoulder that causes pain when she needs to move her arm to receive treatment for her breast cancer. She was also supposed to have a breast ultrasound to check how effective the chemotherapy had been, but MD Anderson rescheduled it to May.

“This whole thing feels like my back is against the wall with no good options,” Ehret said. “It’s hard to know which to be more scared of. I thought maybe cancer won’t kill me. To be honest, I’m not confident at all that coronavirus won’t.”

According to an April 2 statement, MD Anderson, which is one of the leading cancer hospitals in the nation, is postponing “non-urgent outpatient visits, elective procedures and non-emergent screening imaging studies.” No visitors are allowed at the center — with limited exceptions — and all patients and staff are screened when entering the center.

Many patients travel from out-of-state to receive care at MD Anderson. The center is requiring new patients traveling from outside of Texas to self-quarantine for 14 days prior to their appointment, a rule that aligns with Abbott’s latest executive order mandating that visitors from hard-hit states must quarantine.

“MD Anderson will try to reduce the number of visits to Houston to keep patients safe,” according to the statement.

Patients approved for travel will receive a letter authorizing them to do so, and they will be tested for the coronavirus before their appointments. Out-of-state patients are working with their care teams to determine the best course of treatment, including delaying appointments or shifting to a virtual platform, the center said in a statement.

“Our cancer patients are uniquely vulnerable to coronavirus. For this reason, we are committing to increased workforce precautions,” Dr. Peter Pisters, president of MD Anderson, said in the statement. “By limiting our exposure to known and probable risks associated with the spread of COVID-19, namely travel-related exposure and large gatherings, we hope to contribute to our nation’s containment of this disease.”

For cancer patients across the state, the pandemic has made an already emotional experience all the more scary.

Michael Nolen was scheduled to see his oncologist at MD Anderson in Houston twice this month. Concerned about his heightened risks with COVID-19 and because of a delay in receiving chemotherapy for his stage 4 angiosarcoma, a rare form of cancer forming in the lining of blood vessels, Nolen opted to delay the consultations to the end of May.

Because of new protocols to protect patients, Nolen’s wife is no longer allowed to keep him company during his infusion.

“It’s a little bit frightening,” Nolen said. “I understand full well that I have an extremely rare form of cancer that puts me in a different position than other people. It does make me wonder what is going to happen to me.”

Disclosure: Texas Oncology and MD Anderson Cancer Center have been financial supporters of The Texas Tribune, a nonprofit, nonpartisan news organization that is funded in part by donations from members, foundations and corporate sponsors. Financial supporters play no role in the Tribune's journalism. Find a complete list of them here.