What you need to know Wednesday:

Protests continue across Texas for a fifth night

For the fifth night in a row, people in cities across Texas including Austin, Dallas, Houston and Fort Worth marched for George Floyd and in protest of police violence. In Houston, more than 60,000 people marched chanting, carrying signs and demanding “Justice 4 George Floyd.” Mayor Sylvester Turner and several other elected officials joined the march.

The Dallas Morning News reported a quieter night on Tuesday, after two previous nights of protesting where hundreds of people were arrested. On Tuesday, Dallas officials announced an expansion of the zones where the city's 7 p.m. curfew would be enforced. 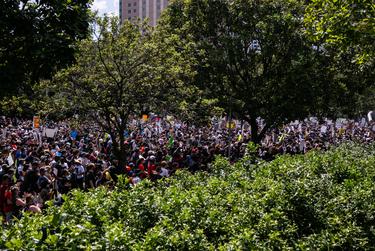 Trib stories you may have missed: