1 person injured in drive-by shooting on West Side

On a Sunday morning in March, Lane Aiena joined his wife and two kids for family breakfast, a rare moment of normalcy amid long days working as a family physician in the middle of the coronavirus pandemic.

His fork rested just above a fresh stack of pancakes, poised to dig in, when Aiena received a text marking the start of the hardest week of his life: Two of his partners at his small-town Huntsville clinic had tested positive for the virus.

“Talk about a brick dropping in your stomach,” Aiena said.

Earlier that week, a nurse at the clinic was the first employee to test positive for the virus. At that point, Aiena personally swabbed every employee — about 25 in all — meticulously swapping masks and gloves between each test. Then came the waiting for the results.

But nothing topped the emotional weight of explaining over video call to his crying children — 3-year-old Madelyn and 1-year-old and Myles — why daddy wouldn’t be home at night while he self-isolated at a hotel or the clinic, Aiena said.

“This has been the hardest time of my life,” Aiena said. “There’s a constant worry, a constant fear that I’m going to infect someone I love.”

Front-line health workers bear the stress of exposing themselves or their loved ones to the novel coronavirus on a daily basis. Some major hospital systems in Texas say they’re seeing a surge of staff reaching out for mental health support, a notable development in a profession that’s traditionally reluctant to seek such help.

Employee calls to Houston Methodist’s confidential counseling service shot up 650% from March, said George Kovacik, a hospital spokesperson. Chaplains at the faith-based CHI St. Luke’s Health system, also in the Houston area, are spending more than half their time consoling staff, a task that typically occupies about 15% of their time, said Joel James, vice president of mission and spiritual care at the hospital system.

The stress has come in waves. First, front-line workers sought mental health support to help them cope with fears that a swarm of coronavirus cases and a lack of personal protective equipment would overwhelm hospitals and leave them exposed to the virus, James said. That didn’t happen in Texas, but the fear has returned as coronavirus restrictions have been relaxed, bringing the risk of a second wave of the virus, James said.

Aiena said he developed “survivor’s guilt” after he tested negative and his three co-workers contracted the virus. And all three staff members presented different symptoms of the virus, Aiena said, making it even harder to nail down the complex pandemic.

“It was the craziest emotions: anger and guilt and being scared for them,” Aiena said.

“Not something you learn in medical school”

Jeri Andreasen, a Conroe paramedic, was on call for six weeks straight, seven days a week, until Memorial Day weekend. She had been hired to screen oil workers at a private airport before they flew to offshore rigs.

Andreasen has been living in a hotel close to her work site, two hours from her fiancé and four kids at home. Each day she left a bag of clothes at the front desk so at the end of the day she could change in the lobby bathroom — just in case she was exposed to the virus at work.

She only briefly saw her children when her fiancé, who is also a paramedic, had to self-quarantine after a patient he cared for tested positive.

“My mental health, it has taken a toll,” Andreasen said. “My thing is having to switch over mentally and become a parent, a front-line employee, a teacher — it’s stressful.”

Aiena follows a similar protocol: He removes his clothes and shoes, keeping them separate from the rest of his family’s laundry, and heads straight to the shower while his wife distracts the kids.

Whenever someone asks Aiena how he’s doing, he said his answer is always the same: tired. 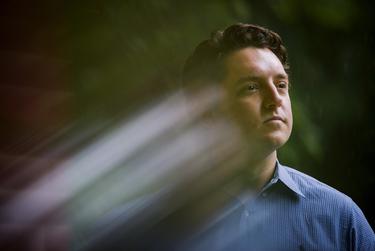 Whenever someone asks Aiena how he’s doing, he said his answer is always the same: tired. The Texas Tribune

Dr. Thomas Kim, a psychiatrist and internist in Austin, said he expects the pandemic to take a “fairly significant toll” on front-line health workers’ mental health. In health crises, people tend to look to doctors and health workers for leadership and guidance, Kim said.

But the pandemic also forces health workers into making “impossible decisions,” Kim said, like having to keep patients isolated from their worried loved ones who are desperate to be with them.

“That’s not something you learn in medical school,” Kim said. “It’s putting my peers in this incredibly stressful and sometimes even toxic environment.”

Dr. Justin Fairless practices emergency medicine in the Dallas-Fort Worth area and sits on the board of the Texas College of Emergency Physicians. Since March, Fairless has taken on longer shifts and more critically ill patients, he said.

But for doctors, there’s a lingering stigma around seeking help for mental health issues, Fairless said.

“As a physician, if you declare that you have a mental illness, that’s something that goes on your record for licensure,” Fairlesss said. “If you need medication, that’s all tracked. A lot of doctors are fearful of having limitations in their practice.”

But that stigma is starting to fade as people become more aware of the daily stress on front-line health workers, Fairless said.

Janay Andrade, the benefits director at Houston Methodist, said the system had plans before the pandemic to revamp its mental health support for health workers in July. The hospital accelerated its new employee assistance program and launched it April 15, Andrade said, increasing the allotted number of free sessions employees can receive from three to 10.

The hospital also sends out emails multiple times a week encouraging staff to take care of their mental health and highlighting available resources. That includes peer support groups where health workers can talk through crises and stressful decisions about patient care among fellow employees, Andrade said.

Some hospitals also display posters from the Grant Halliburton Foundation, a Dallas-based mental health education nonprofit, that encourage staff members to take breaks, connect with loved ones and seek professional support in some cases.

The foundation distributed the poster in late April, after hospitals concerned about employees’ mental health requested them, said Cami Fields, the foundation’s outreach and education director.

“Most experts are saying right now, it’s too soon to say how much it’s really going to affect people’s mental health,” Fields said. “One thing we can know for sure is it’s going to have a toll … on health care workers.”

When Aiena is off the clock, he busies himself with projects and playtime with his kids, he said.

He and his wife only watch comedies — “Scrubs” is their recent show of choice. Madelyn saying “hug me” and Myles’ energy make it “hard to focus on COVID,” Aiena said.

“I’m blessed to have two amazing, healthy kids and an incredible wife,” Aiena said. “I go into the playroom, and it distracts me from the day. It naturally distracts you — it’s really cool.”

How to get help

Disclosure: The Texas College of Emergency Physicians has been a financial supporter of The Texas Tribune, a nonprofit, nonpartisan news organization that is funded in part by donations from members, foundations and corporate sponsors. Financial supporters play no role in the Tribune’s journalism. Find a complete list of them here.