Published: June 9, 2020 4:44 pm
Tags:
Politics
The Floyd family and others attend the funeral service for George Floyd at The Fountain of Praise church in Houston on Tuesday, June 9, 2020. David J. Phillip/Pool Photo via USA TODAY Network

Hundreds of people filed into a Houston chapel on Tuesday to pay their final respects to George Floyd, whose death at the hands of the Minneapolis police ignited a protest movement worldwide, along with a flood of pain, anguish and a want for change in American policing.

Though masks and tears muffled some people’s words, mourners took turns remembering the man who called Houston’s Third Ward home. He was a brother, a son, a father and a friend. In death, his name has become a global chant, hashtag and a symbol of racial injustice.

“We are not fighting some disconnected incidents. We are fighting an institutional, systemic problem that has been allowed to permeate since we were brought to these shores. We are fighting wickedness in high places,” civil rights activist the Rev. Al Sharpton said in a eulogy for Floyd.

“Until we know the price for black life is the same as the price for white life, we’re going to keep coming back to these situations over and over again,” Sharpton added. “I want to give a commitment to the family that we’re going to be here for the long haul. When the last TV truck is gone, we’ll still be here.”

Tuesday’s service capped off a series of gatherings honoring Floyd in the past week; it was closed to all but family members, friends and invited guests, including Houston Mayor Sylvester Turner, U.S. Reps. Sheila Jackson Lee and Al Green, both Houston Democrats, boxer Floyd Mayweather and singer Ne-Yo.

“I’m so grateful today to say a man by the name of Big Floyd walked among us,” Jackson Lee said, “and made a legacy no one can deny.” 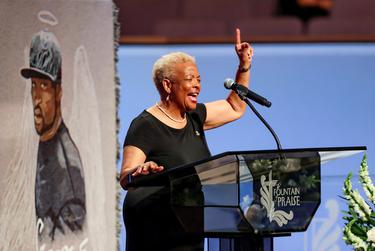 The Rev. Dr. Mary White prays during the funeral for George Floyd at the Fountain of Praise church in Houston on Tuesday, June 9, 2020. Godofredo A. Vasquez/Pool via REUTERS

Floyd’s death sparked rallies and protests after gruesome video footage surfaced of a white police officer, Derek Chauvin, handcuffing Floyd and kneeling on his neck for nearly nine minutes as Floyd cried out for his late mother — whose name he has tattooed on his belly — and pleaded for help. After the service, Floyd was carried by a horse drawn carriage to his final resting place in Pearland to be buried next to her.

Early Tuesday, six black men in black suits and black face masks unloaded Floyd’s gold casket from the back of a hearse. There was silence among the crowd as the pallbearers carried Floyd’s body into the Fountain of Praise Church.

“George Floyd was not expendable,” Green said. “This is why we’re here. His crime was that he was born black. That was his only crime. George Floyd deserved dignity and respect.”

Born in North Carolina and living in Minneapolis at the time of his death, Floyd spent most of his life in Houston. The ceremony came several days after another one in Minneapolis that was similarly limited to family members and invited guests. On Monday, the city remembered him at a public viewing that lasted for more than six hours. Unlike the marches and protests calling for systemic changes, Tuesday’s event served more as chance to remember Houston’s fallen son.

In the hymn-filled sanctuary, relatives told personal stories about Floyd. One of his aunts said that though the world may now know her nephew by his name or his last words — “I can’t breathe” — which have become a rallying cry, she knew Floyd as “Perry Jr.” Floyd’s mother, she said, was lovingly known as “Miss Sissy.”

“I’m going to miss my brother a whole lot,” added one of Floyd’s brothers through tears. “I love you and thank God for giving me my own personal superman.” After he spoke, he immediately sought solace from other family members, who all stood onstage wearing white.

One of his nieces, Brooke Williams, laughed as she remembered that Floyd would always ask her to scratch his head after long days at work. Her speech was marked by both defiance and sorrow, advocating for police reform, yet reminiscing on happier times with her uncle, like when he would call her “baby girl” and tell her she was “going to go so far with that beautiful smile and brain of yours.”

“Someone said, ‘Make America Great Again,’” she said. “But when has America ever been great?”

Though mourners cried behind face masks, the event was also marked by celebration.

“This will be a home going celebration of brother George Floyd,” said one of the introductory speakers of the day, who also encouraged people to keep their distance and keep their masks on for fear of contracting the coronavirus. He stood between white flower arrangements and a mural of Floyd with angel wings and a halo. “That means foot stomping, yelling Hallelujah and praising God.”

Cyril White, the founder of To God Be The Glory Sports, spoke alongside the family and announced Tuesday that he’s secured a commitment for three acres of land to host a Floyd memorial sports center. (Floyd had been a star football and basketball player in high school.)

An artist painted a black-and-white mural of Floyd as someone sang a rendition of “A Change Is Gonna Come.” Mourners swayed from side-to-side as singers sang various gospel hymns.

Joe Biden, the Democratic nominee for president, sent in a video message, acknowledging to Floyd’s family, especially his 6-year-old daughter Gianna, that “her daddy [has] changed the world.”

“To George’s family and friends — Jill and I know the deep hole in your hearts when you bury a piece of your soul deep in this Earth,” Biden said. “For most people, the numbness you feel now, will slowly turn, day after day, season after season, into purpose through the memory of the one they lost.

“But for you, that day has come before you can fully grieve. And unlike most, you must grieve in public. And, it’s a burden. A burden that is now your purpose — to change the world for the better in the name of George Floyd,” the former vice president said.

Over the past week, protesters have taken to the streets demanding justice for Floyd and for other black Americans who have died at the hands of police. At the services Tuesday afternoon, Turner, the mayor of Houston, said he plans to sign an executive order banning chokeholds and strangle holds. The order will require deescalation and that officers give a warning before they shoot, among other things.

During his speech, Turner declared June 9 George Floyd Day in the city of Houston. 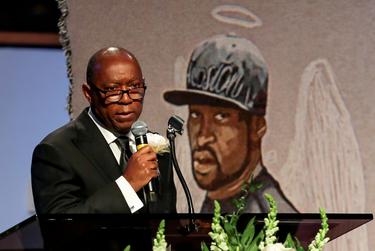 Houston Mayor Sylvester Turner speaks during the funeral for George Floyd at the Fountain of Praise church in Houston on Tuesday, June 9, 2020. Godofredo A. Vasquez/Pool via REUTERS
Ad

Since Floyd’s death, Derek Chauvin, the white officer seen wedging his knee into Floyd’s neck, has been charged with second-degree murder. His bail was set at $1.25 million during a Monday hearing. All four officers that participated in the arrest have been fired.

In Texas, state lawmakers announced Tuesday that they plan to push for more criminal justice reforms when the Legislature convenes in 2021. Meanwhile, Houston Police Chief Art Acevedo, who has changed his personal Twitter picture to an image of Floyd, will serve as a virtual witness during a congressional hearing Wednesday where lawmakers will discuss racial profiling and police brutality.

Growing up in one of Houston’s poorest neighborhoods, Floyd was a 1993 graduate of Jack Yates High School. He was the first of his siblings to attend college, and did so on an athletic scholarship, but returned to Texas before graduating. He moved to Minneapolis for a fresh start.

But Houston, where Floyd grew up, has adopted several tributes and memorials dedicated to Floyd. Several miles away from the Fountain of Praise Church there’s a drawing of Floyd on a brick wall drawn in chalk. His head has a halo atop it, while angel wings come out of his torso. In large letters next to his face reads, “In loving memory of BIG FLOYD.” An outline of Texas is drawn in the middle of the “O.” Flowers and balloons are scattered on the surrounding ground.

“Your family’s going to miss you George, but your nation is going to always remember your name,” Sharpton said as he closed out Tuesday’s services. “You fought a good fight. Go on and get your rest now. Go on and see momma. We’ll fight on.”

Several in the crowd stood and wept.