Annual Chanukah On The River event held in San Antonio

The eviction crisis in photos: How three Texans faced losing their homes during a pandemic

The COVID-19 pandemic and subsequent economic recession have left families across Texas facing a housing crisis. Many were forced to rely on community members and friends for support; relatively few were able to successfully navigate the often confusing patchwork of government-funded assistance programs.

In this photo essay, the Tribune asked three Texans to explain what it was like to have their lives upended and how they have persevered through the economic upheaval caused by the pandemic. 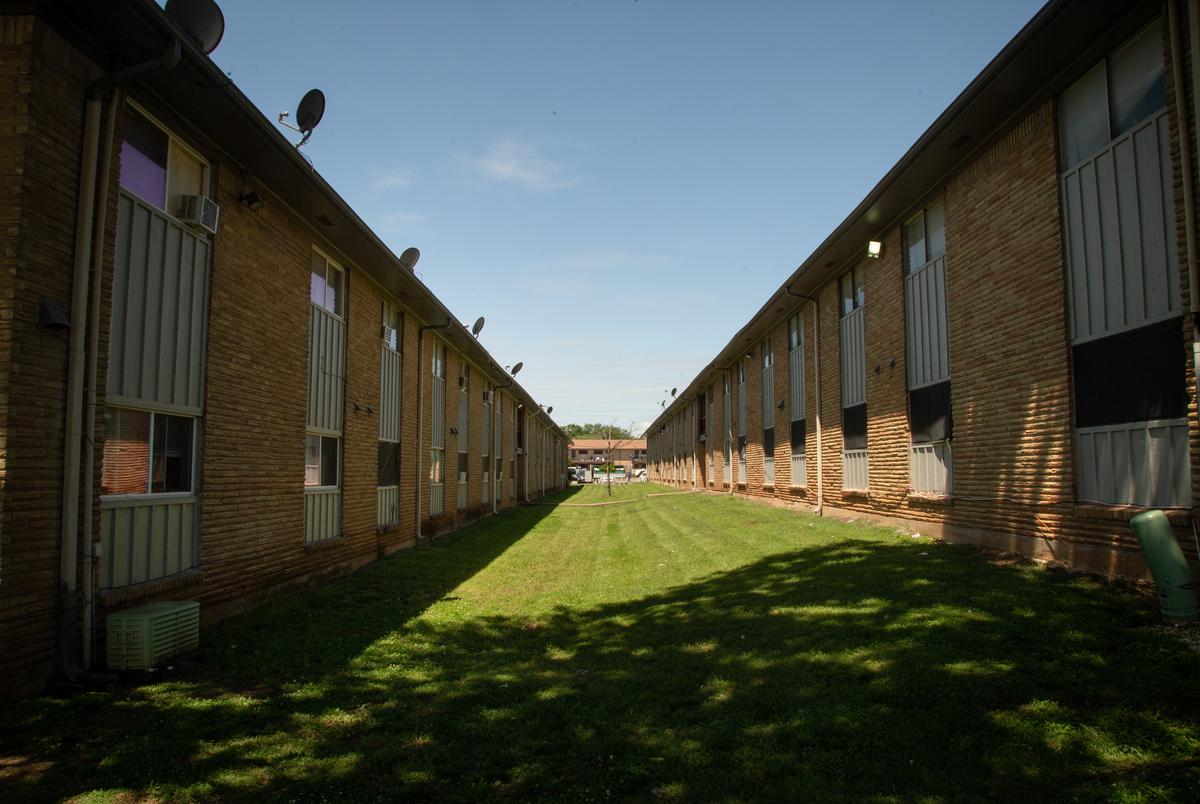 A row of apartments in west-central Dallas on May 13, 2021. Credit: Evan L'Roy/The Texas Tribune
Ad

Even before the pandemic, Texas was a tough state for low-income renters.

“The eviction process can happen quickly, [tenants] can lose their home in a matter of less than a couple weeks,” said Christina Rosales, deputy director of Texas Housers, an Austin nonprofit that seeks to provide clear information on complex housing policies for low-income tenants and acts as a government watchdog organization.

According to a report released by The National Low Income Housing Coalition in 2020, Texas had the sixth-lowest supply of affordable rental homes among U.S. states, with only 29 such homes for every 100 extremely low-income renter households.

“The pandemic kind of accelerated all that,” Rosales said. “It accelerated a housing crisis, essentially, in Texas.”

In September 2020, the U.S. Centers for Disease Control and Prevention issued a nationwide eviction moratorium meant to temporarily halt residential evictions and prevent the further spread of COVID-19. Originally set to expire in December, the moratorium has been extended through July 31. Prior to the CDC moratorium, Congress passed the CARES Act, which offered similar protections for renters from late March to late July of 2020.

On Feb. 25, a federal judge in Texas ruled that the CDC moratorium is unconstitutional. Since then, the Texas Justice Court Training Center, which trains judges and issues procedural guidance, has updated its eviction-related guidelines and now allows for individual judges to determine whether to uphold the CDC moratorium in eviction cases.

“In essence, for the last year, there’s been this patchwork of eviction protection for renters. It has kind of held back that wave of evictions for renters,” Rosales said. 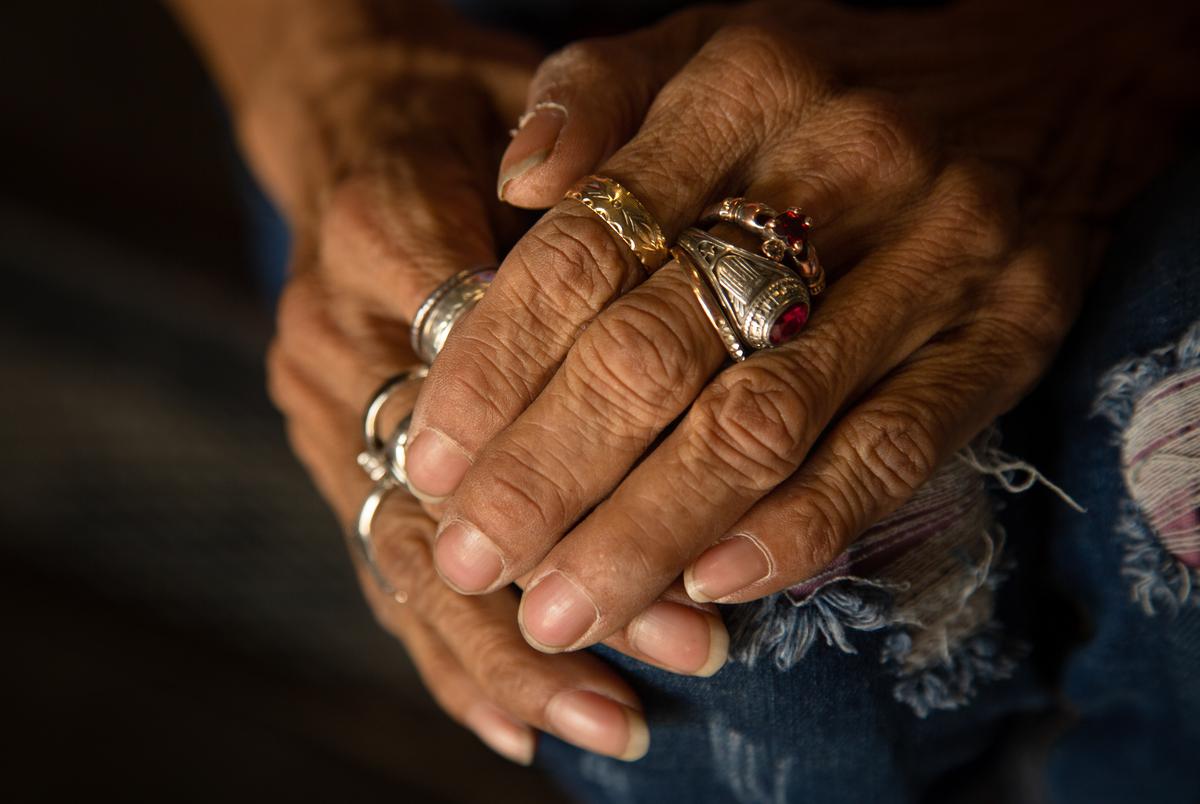 Marcela Ramos sits for a portrait outside her home in West-Central Dallas, on May 13, 2021. Credit: Evan L'Roy/The Texas Tribune 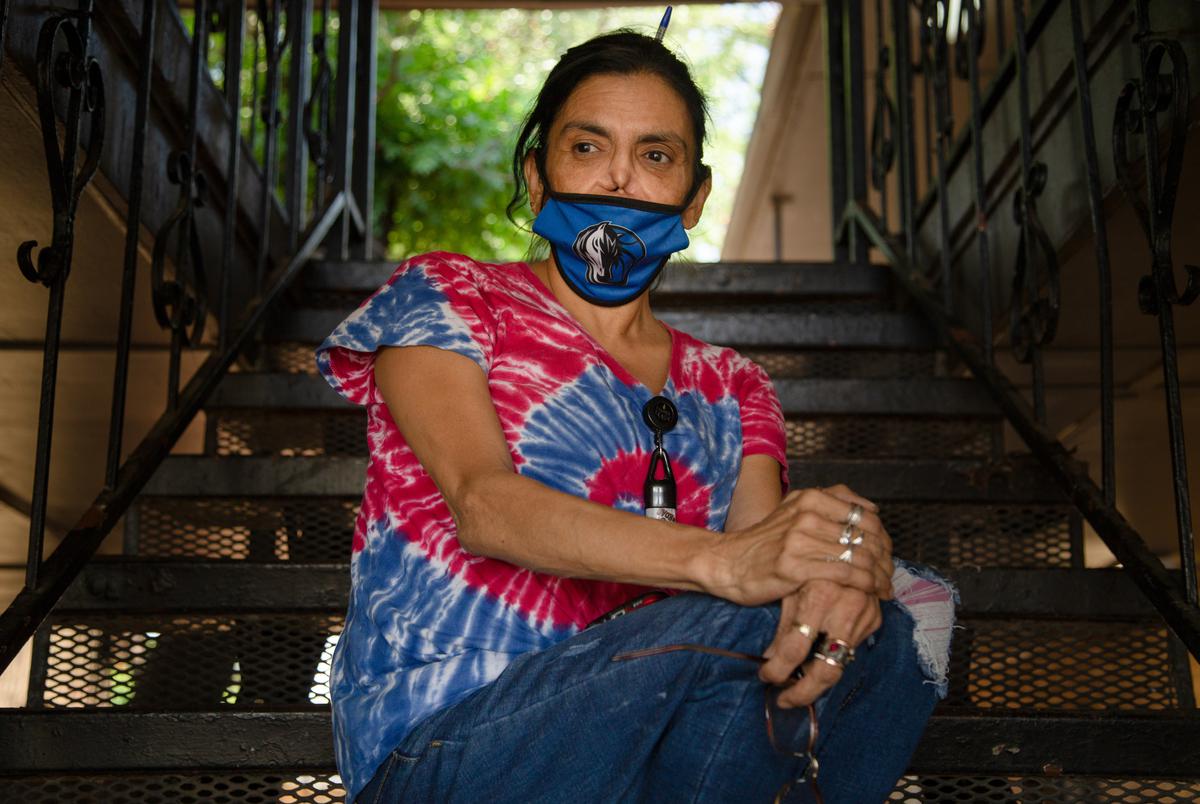 Marcela Ramos sits for a portrait outside her home in West-Central Dallas, on May 13, 2021. Credit: Evan L'Roy/The Texas Tribune

Marcela Ramos, 60, sits outside of her home in Dallas. Ramos was among the tenants who received funding from the city's rental assistance program. Credit: Evan L'Roy/The Texas Tribune

When her roommate moved out in late 2020, Marcela Ramos, 60, was living alone in Dallas and no longer able to cover her entire rent with her monthly Medicaid check. The first eviction letter arrived in October.

A friend suggested that she complete the CDC Eviction Protection Declaration, a written statement expressing her fear that she would risk homelessness due to the effects of the pandemic, as well as to apply to the Texas rent relief program. Ramos said the paperwork was extensive — and stressful — but she was able to successfully delay her eviction three times under the moratorium.

"Every three months, I would ... go drop off a letter to [the landlord]," Ramos said. "I kept up with it, for sure, because I knew I had to, I had no choice but to keep up with it until I found out what to do." 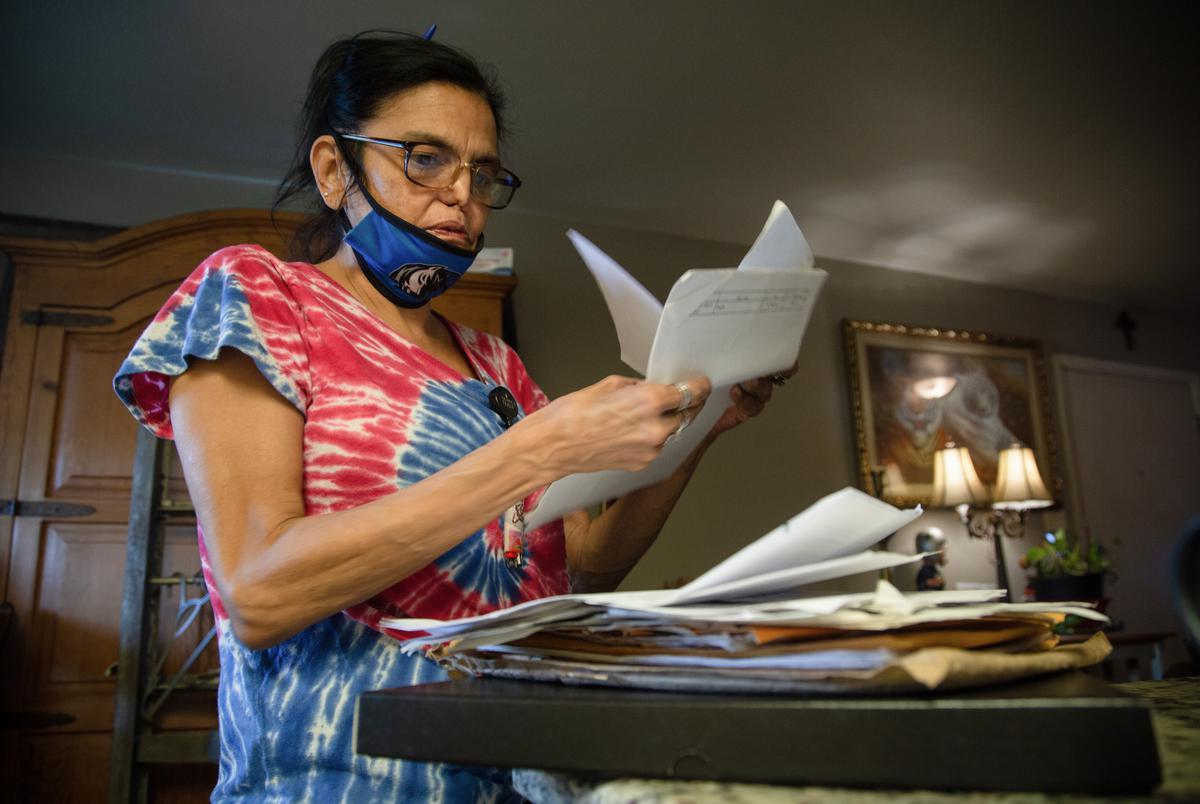 Marcela Ramos looks through stacks of paperwork concerning rental assistance in her home in West-Central Dallas, on May 13, 2021. Credit: Evan L'Roy/The Texas Tribune 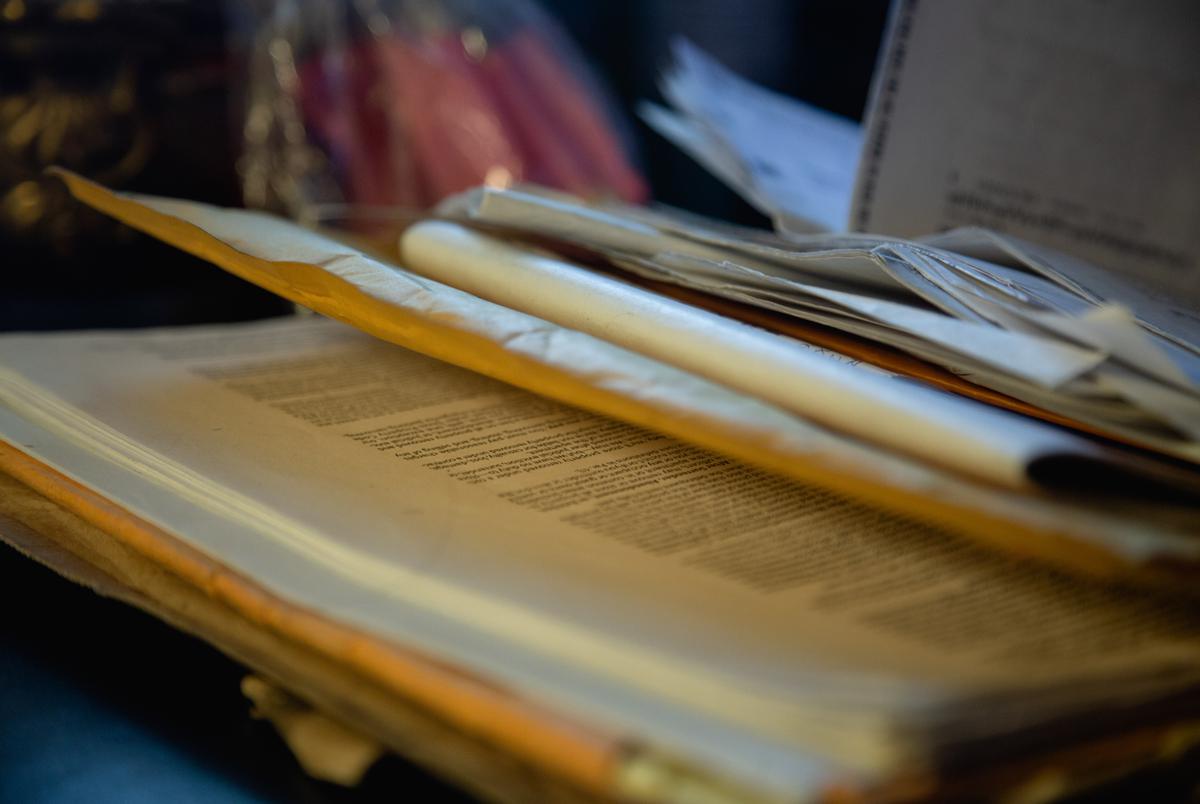 In February, Ramos was one of the tenants who received funding from the city of Dallas' rental assistance program, which covered her rent through July 31, when the CDC eviction moratorium is now set to expire. Ramos was also able to find a new roommate, and is looking for another apartment.

"Ever since they’ve helped me, I’ve gotten a lot brighter. It gave me time to pay my rent," Ramos said. "But during that time, it was very, very stressful because I didn’t know what was going to happen."

The state also launched a rental assistance program, and as of April, 176,000 people had begun applications for assistance through the Texas rent relief program. Of the 1,000 applications that have been approved, only 250 payments had been sent as of early April, according to a legislative report by the Texas House Urban Affairs Committee. The report supported claims from tenants that the $1 billion rent relief program suffered from software and accessibility problems. 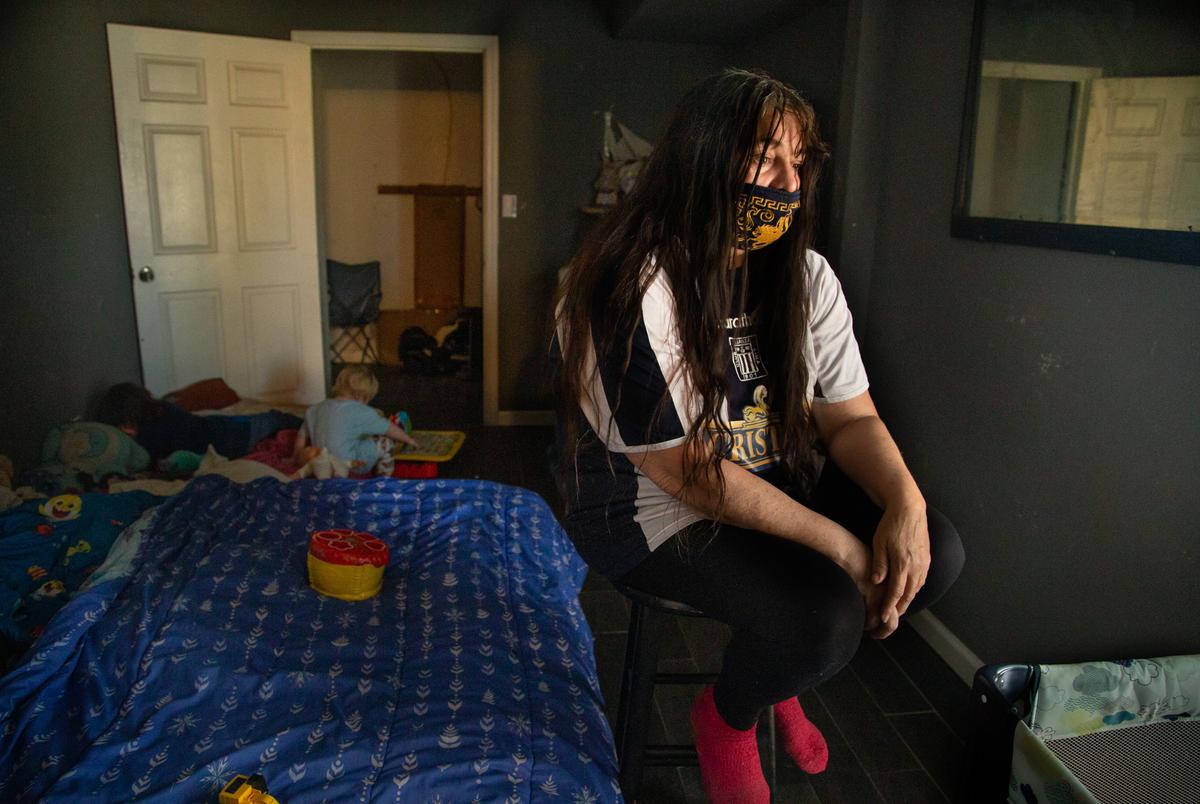 Lucille Hammash, 55, rests for a moment while her two grandsons play behind her in their Houston home. Credit: Evan L'Roy/The Texas Tribune

Lucille Hammash, 55, said that when the COVID-19 pandemic started, her daughter and two sons all lost their jobs as a server and welders and were unable to pay the rent on their Houston home.

They were evicted in June 2020, then lived out of their car and hotels for two months before their church helped them pay the rent on a new home. Hammash said she applied to several financial aid programs, but has since only received a reply from Harris County Rental Assistance, notifying her that they were processing her application. Now, Hammash is worried about being evicted for a second time. 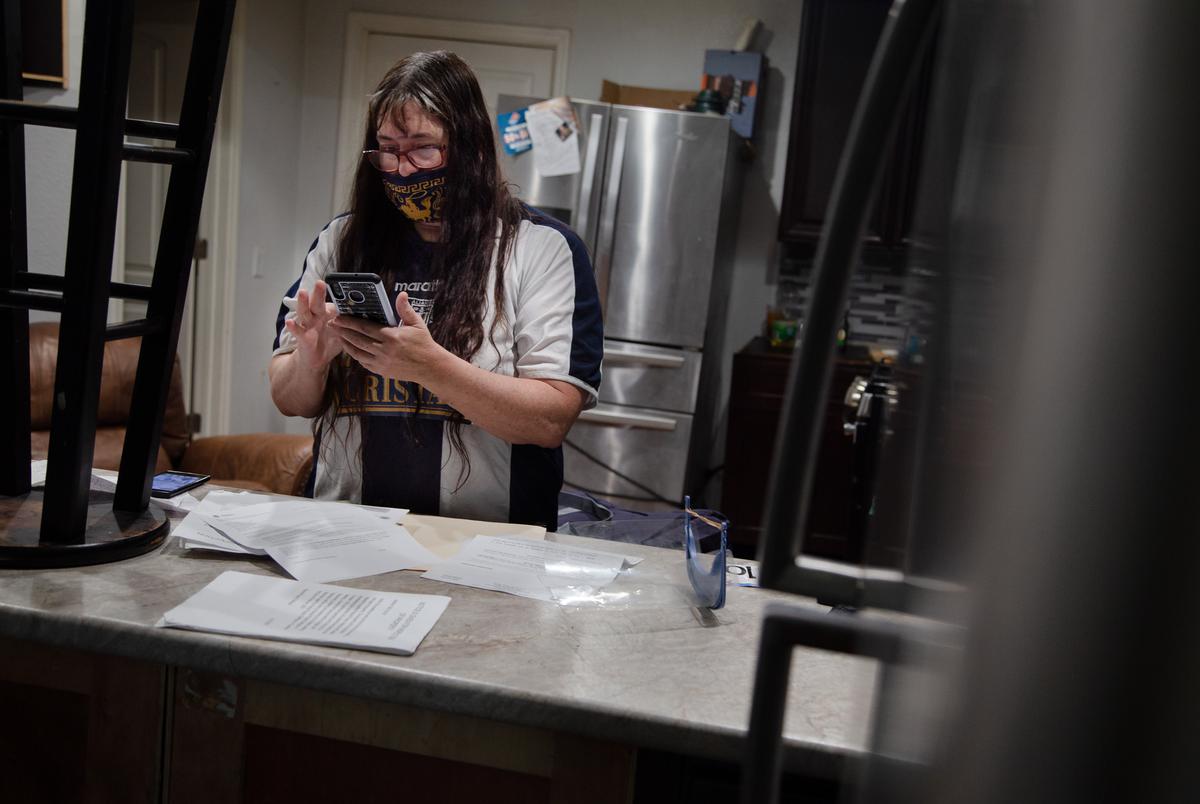 Lucille Hammash looks through housing assistance forms in her Houston home. Hammash says the last time she and her children were able to pay rent was in January. Credit: Evan L'Roy/The Texas Tribune
Ad

More than 24,000 evictions have been filed in the Houston area since the start of the pandemic, according to research from Eviction Lab. Low-income households are particularly at risk of eviction and homelessness. 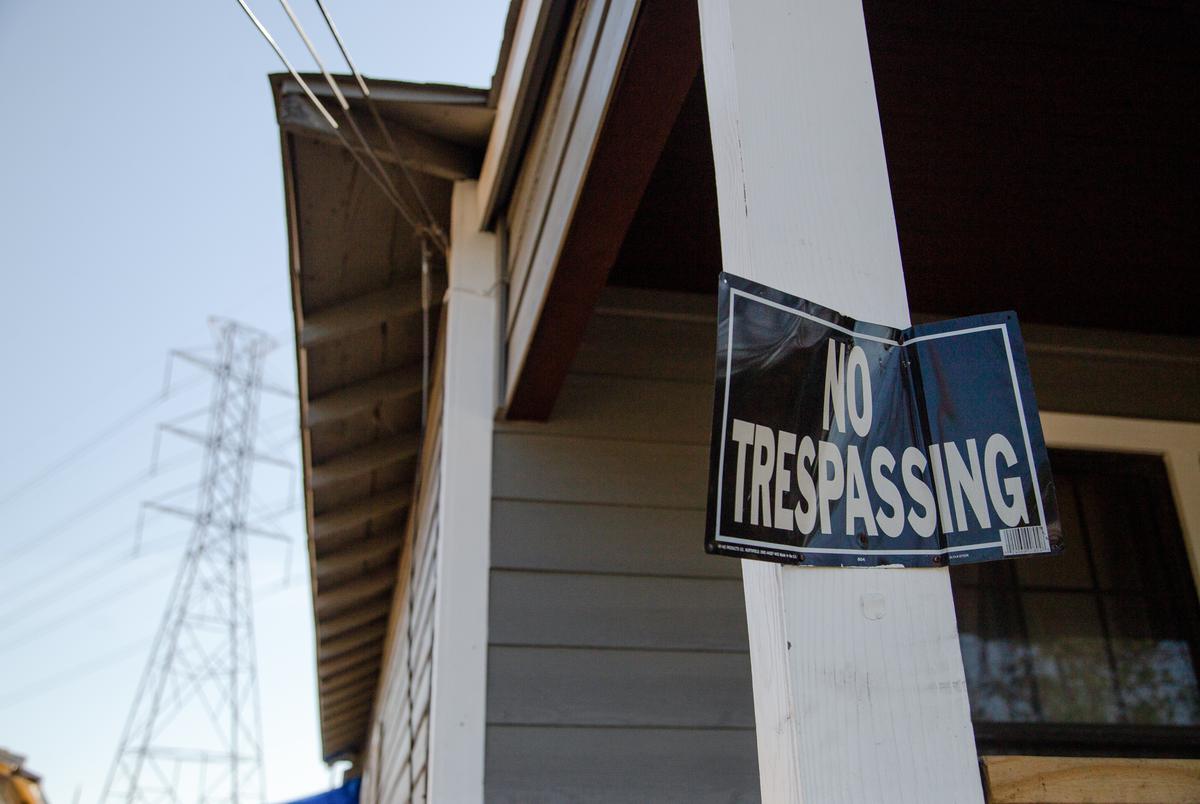 A "No Trespassing" sign hangs from the corner post of Lucille Hammash's home in central Houston, on April 11, 2021. Credit: Evan L'Roy/The Texas Tribune 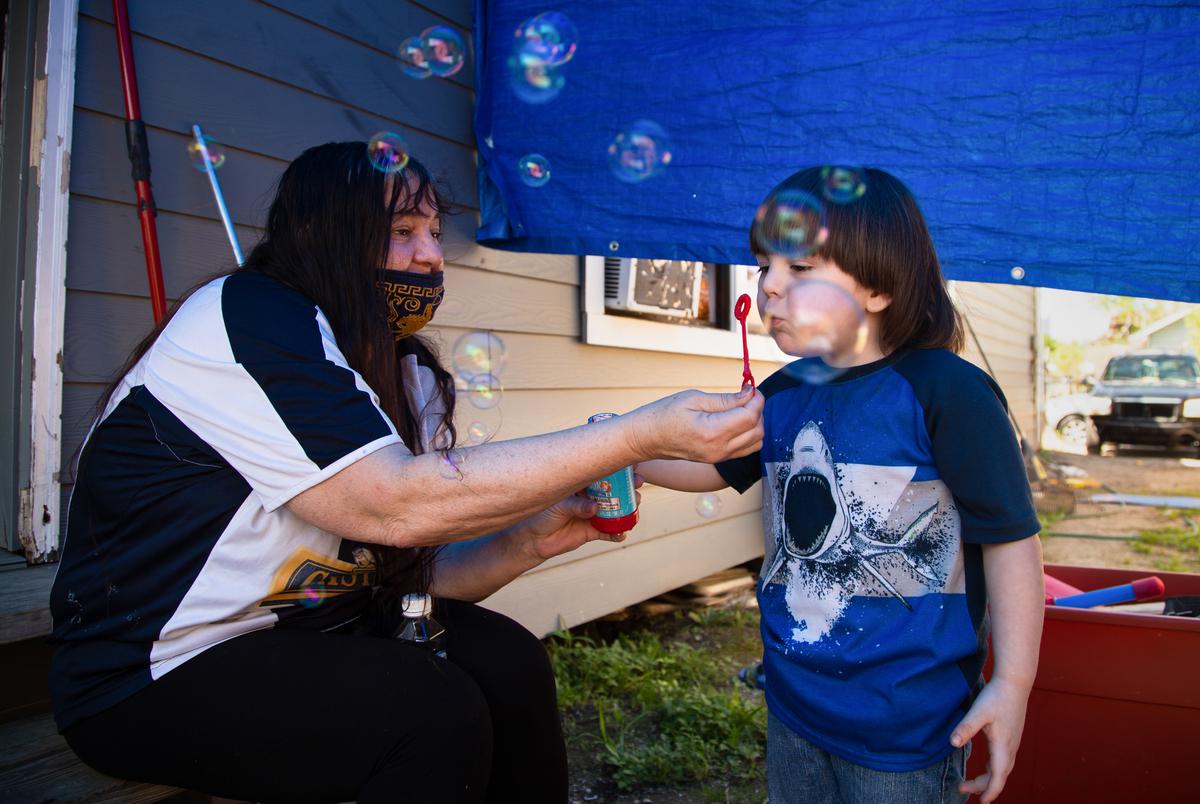 First: A "No Trespassing" sign hangs from the corner post of Lucille Hammash's home. Last: Hammash helps grandson Noah Proctor blow bubbles in the side yard of their home. Hammash said that her grandchildren don’t understand what happened when they were last evicted. “They ask, ‘Where’s my bedroom, where’s my toy? What happened?’ It’s hard for them [to process],” Hammash said. Credit: Evan L'Roy/The Texas Tribune 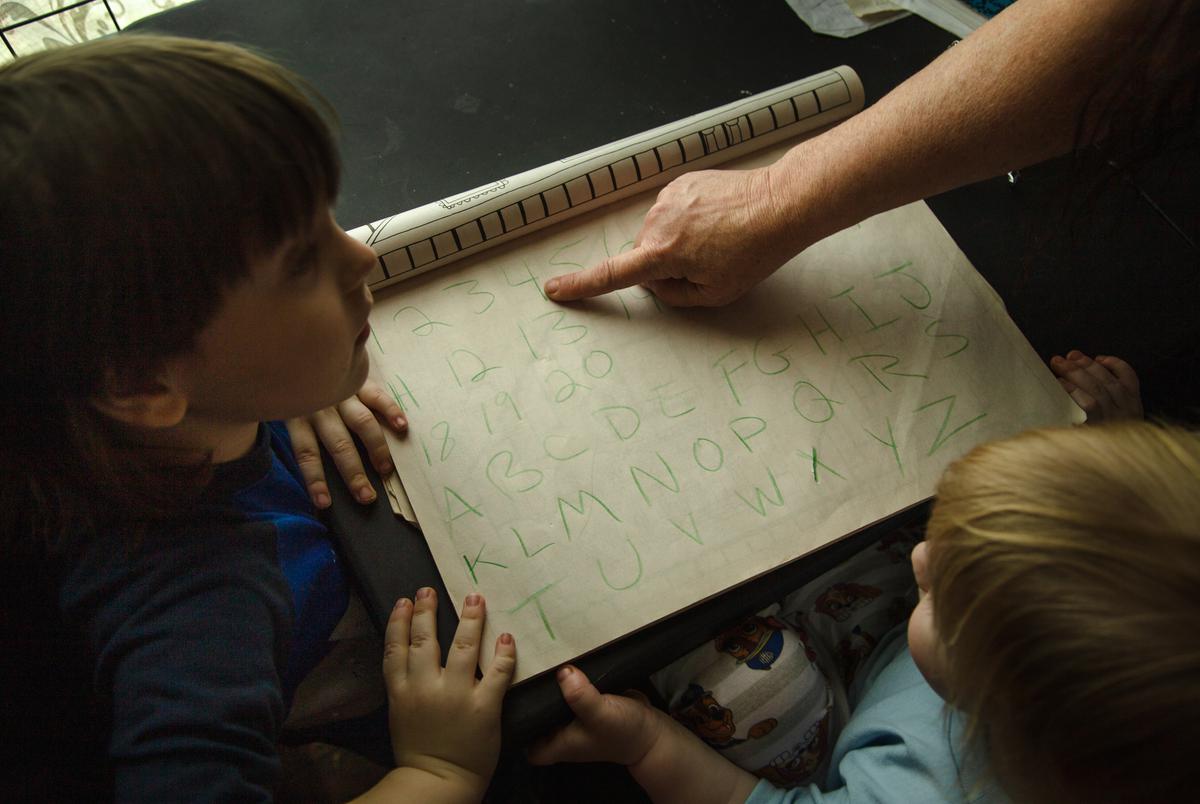 Lucille Hammash goes through the alphabet with two of her grandchildren, Noah and Kenny Proctor in their house in central Houston on April 11, 2021. Credit: Evan L'Roy/The Texas Tribune 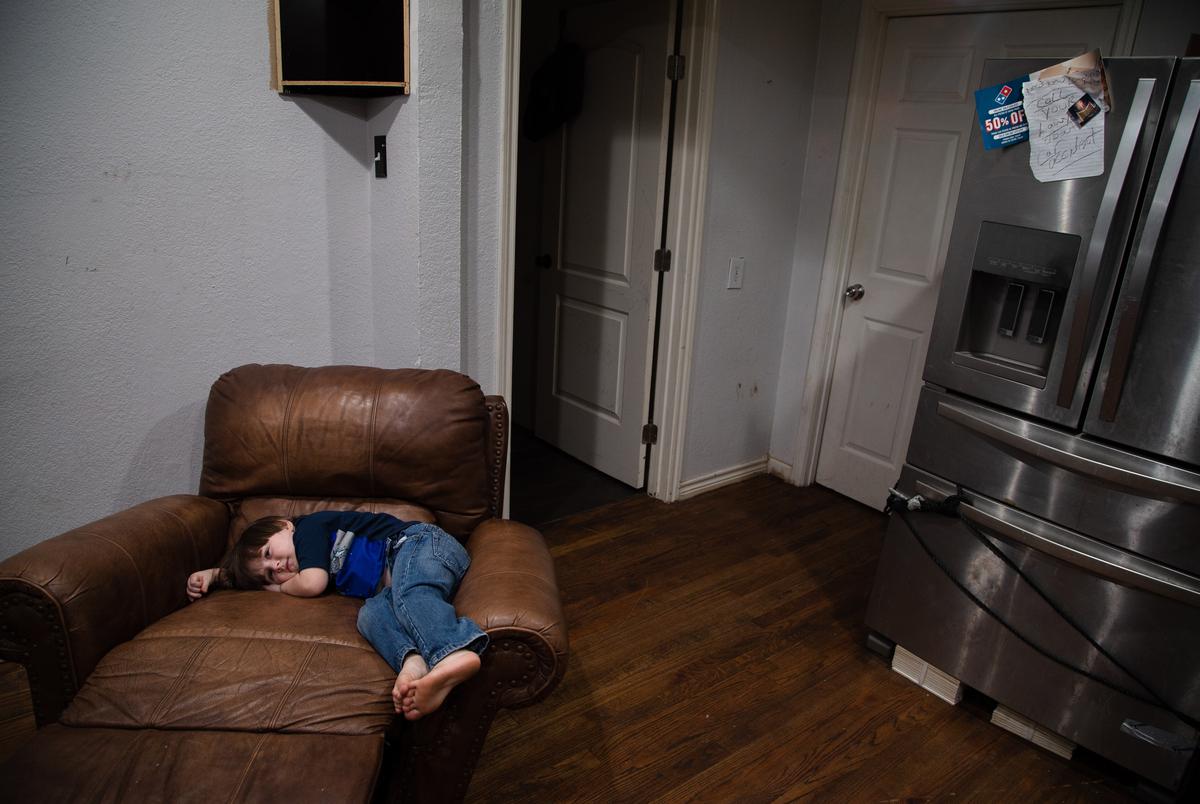 Noah Proctor lays on an arm chair in his home in central Houston on April 11, 2021. Credit: Evan L'Roy/The Texas Tribune

First: Lucille Hammash goes through the alphabet with two of her grandchildren, Noah and Kenny Proctor. Last: Noah Proctor, 3, lays on an arm chair in his home. Hammash said her family has kept her going. “The only thing I never lose is my little family. We always stick together,” she said. “Without my kids, I would’ve been dead.” Credit: Evan L'Roy/The Texas Tribune

Hammash, who acts as the primary caretaker for two of her grandchildren during the day, says she feels constantly stressed at the thought of being evicted again. 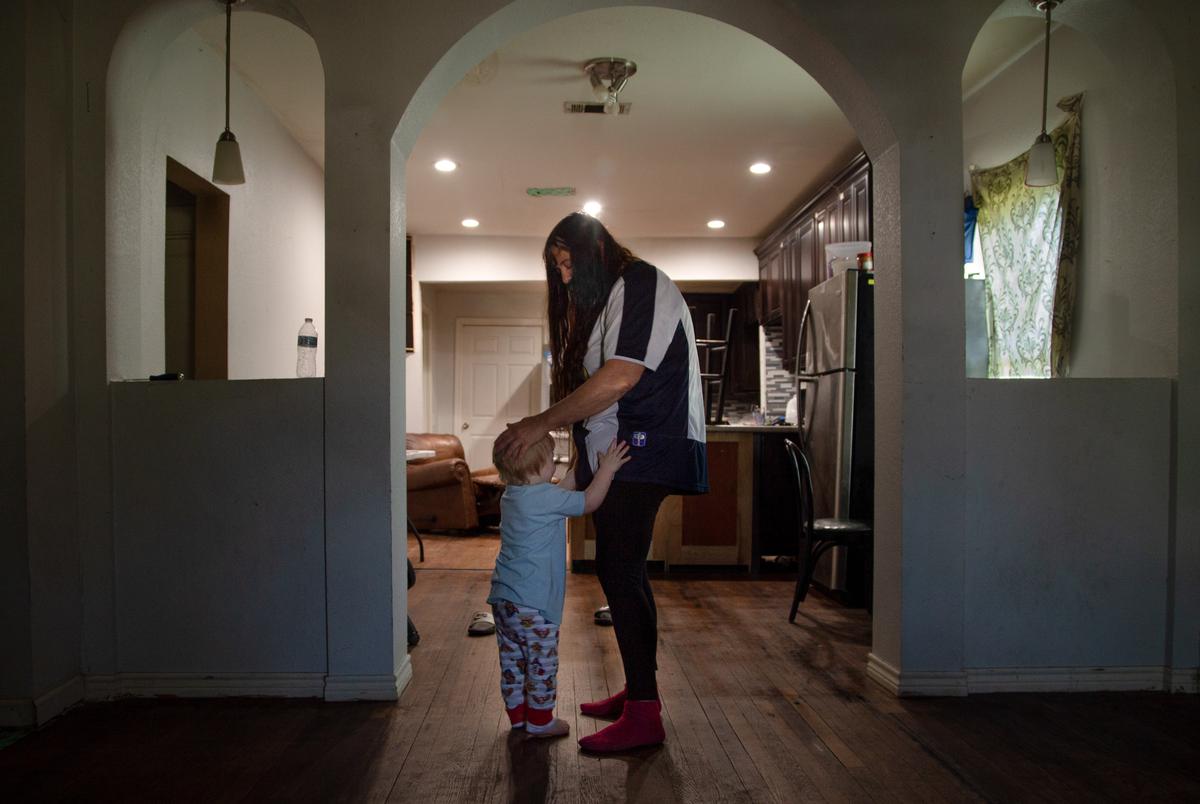 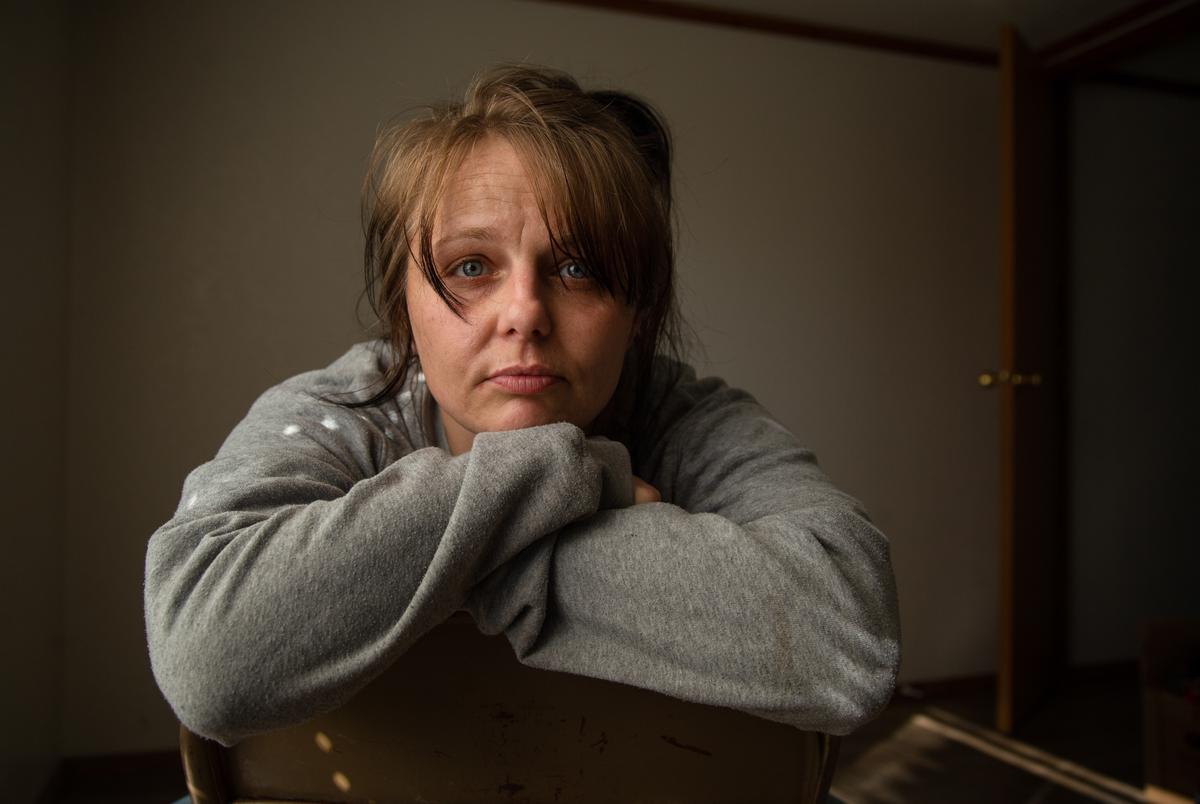 Wendy Short, 39, sits inside her new mobile home in De Leon, on March 25, 2021. She and her family were evicted at the start of the COVID-19 pandemic, and were forced to rely on family and friends to find places to stay. Credit: Evan L'Roy/The Texas Tribune

It was a sunny day in May 2020 when Wendy Short heard a knock on the door of her house in De Leon, a city of 2,400 residents between Abilene and Fort Worth. It was a Comanche County constable.

“He said, ‘Y’all gotta get out of the house, y’all have been evicted,’” said Short, 39, who was living with her then-fiancé, Josh Short, 24, her daughter Amanda Garrison, 15, and her daughter’s 15-year-old boyfriend. “We didn’t have anything packed.”

Their landlord showed up and moved her family's things out of the house. Short recalls items being tossed to the curb, some breaking in the process, and scrambling to find a way to transport and store all her belongings.

“It’s just been hell for my entire family, this whole time. I felt...helpless. I felt sad, I felt lost, I didn’t know where I was going to go, what I was going to do,” said Short, who had recently lost her job as a caretaker for her late sister. 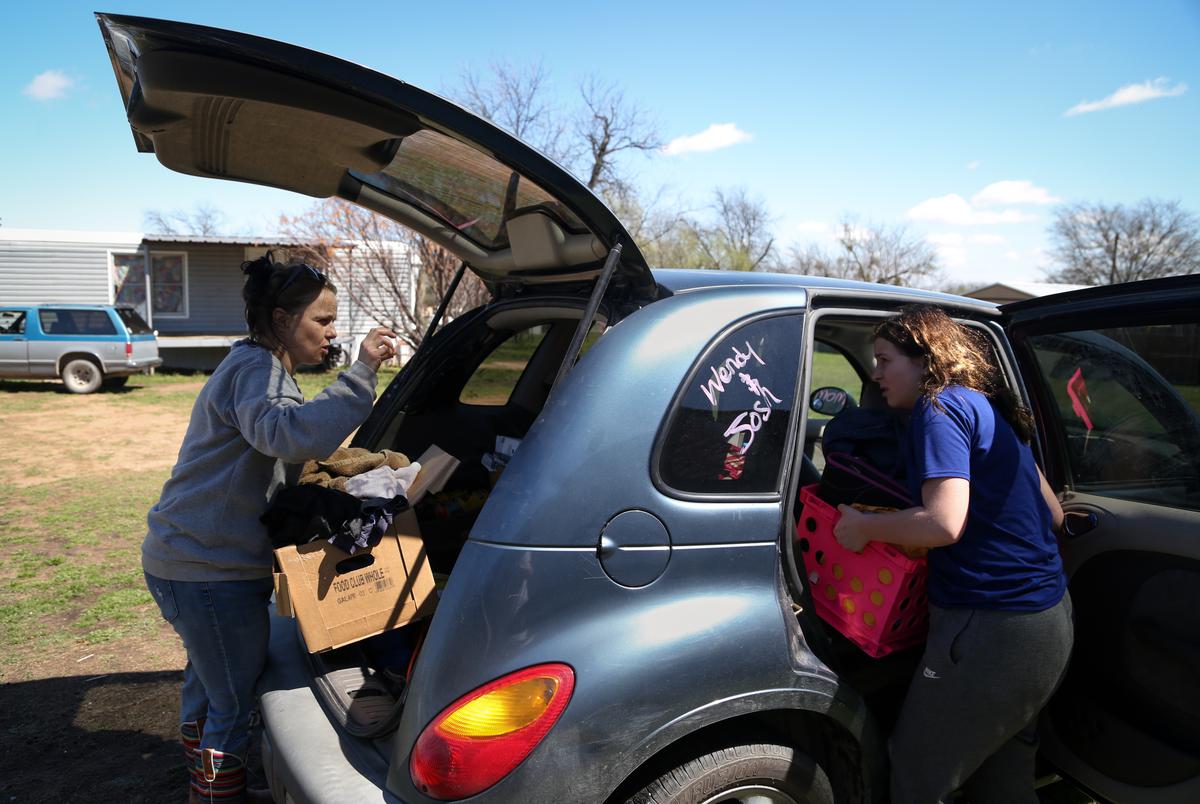 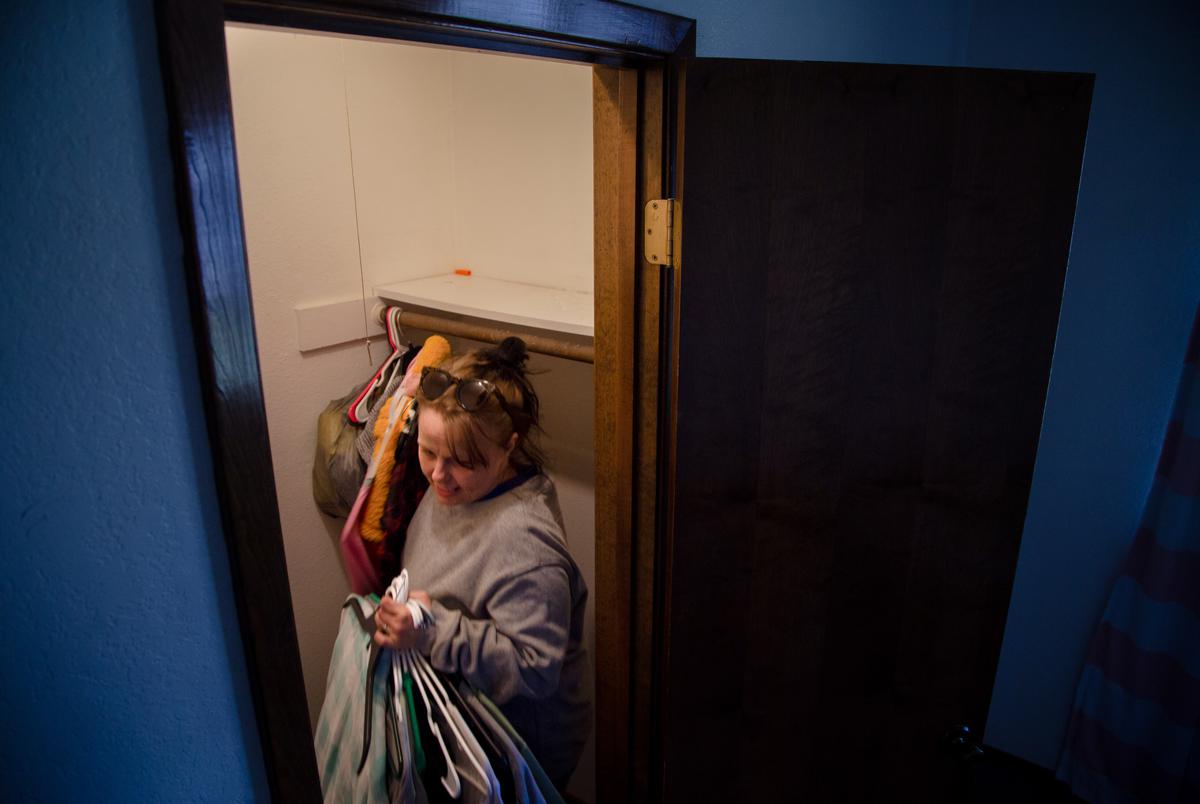 Wendy Bryant grabs the last of her clothes from the room she had been staying in at a friends place before moving to a new mobile home in Del Leon, on March 25, 2021. Credit: Evan L'Roy/The Texas Tribune

First: Wendy Short and daughter Amanda Garrison unpack the family car outside their new mobile home. Last: Short grabs the last of her clothes from the room she had been staying in at a friend's place. Credit: Evan L'Roy/The Texas Tribune

Short’s family split apart — some of her children went to live with her mother in a public housing unit, while she and her fiancé moved in with a friend. They stayed there for three months, then had to crash with another friend.

“Living with people, you sit there and stress about ‘When am I going to be able to get my own place?’ and ‘Am I bothering this person? Am I a burden?’” she said.

Then, almost a year after their eviction, a friend told them about a mobile home that had just become available that day. Short went to visit the landlord immediately. He listened to their situation and agreed to rent it to them, even allowing them to pay the deposit over time.

“I was like, ‘Are you serious?’ and just started kind of crying there in the office,” Short said. “Like ‘Oh my god, I’m going to have my own place!’” 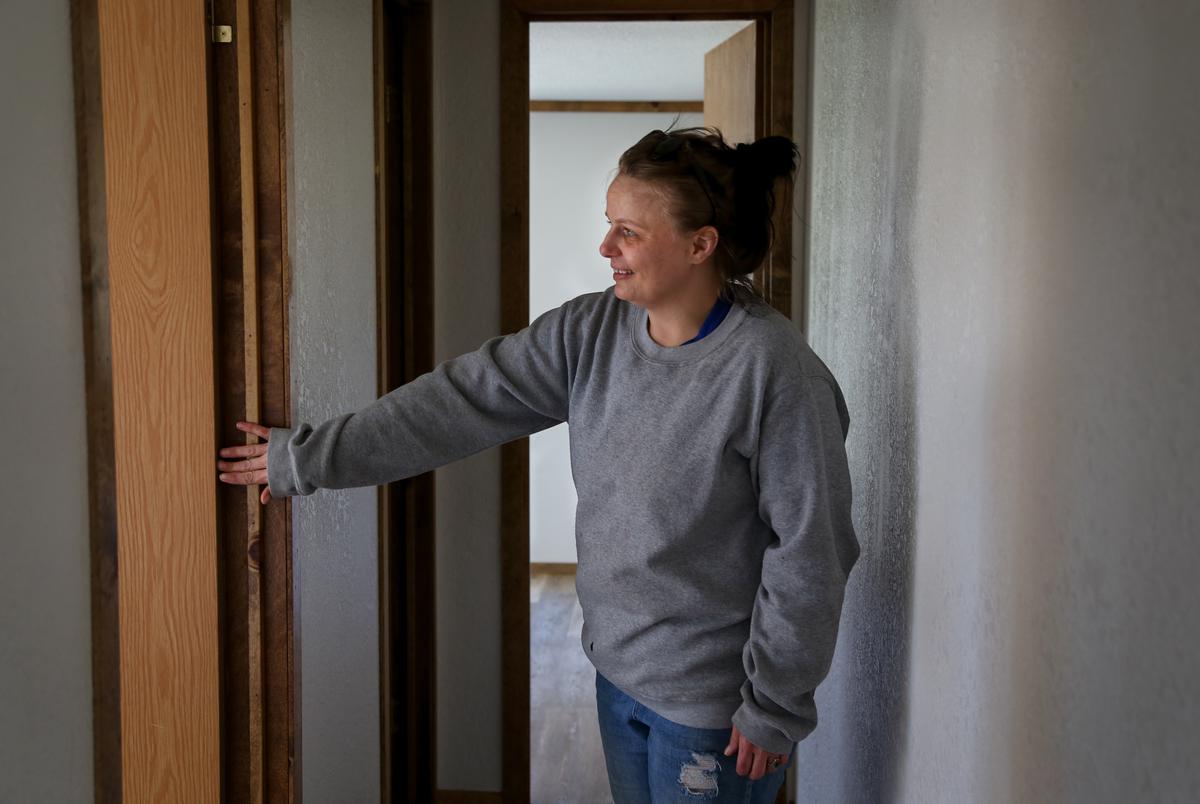 Wendy Short explores the rooms in her new mobile home. This was the first time in over a year that her family has been able to afford their own housing. Credit: Evan L'Roy/The Texas Tribune

Short said she had filed for rental assistance and unemployment, but had trouble navigating the Texas Workforce Commission’s application process.

“I talked to two or three people from the TWC that had guided me through [the application], and we thought it went through and it never did,” Short said. 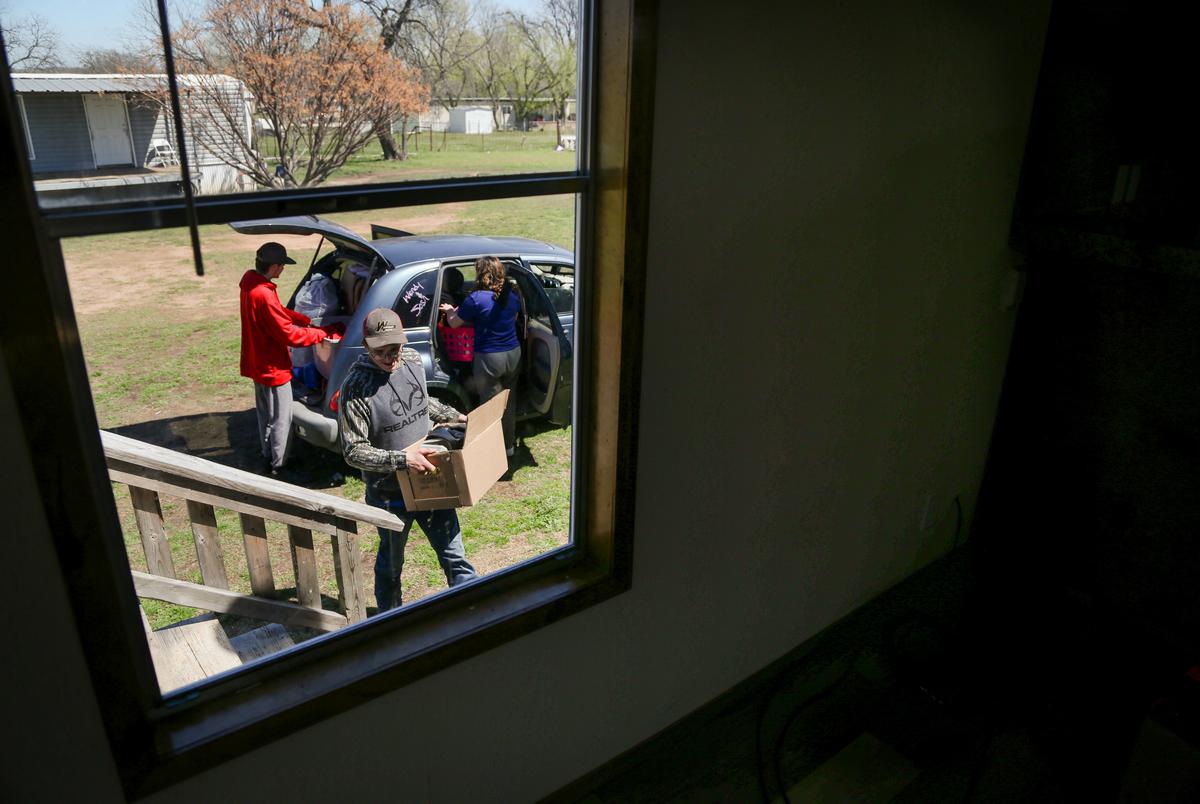 Short and her fiancé, who have since married, were both able to find new jobs in May, working at a local restaurant and grocery store.

“I felt like I had just climbed a big mountain, like I had just taken one gigantic step,” Short said. “To have your own area where you can be you and not worrying about stepping on someone’s toes… I felt like the shackles weren’t as tight. Now, there is some breathing room."