When the security guard at Methodist Hospital San Antonio met the visitor at the door of the children’s emergency room on a Saturday afternoon in early August, the officer’s request was simple: The man needed to get a temperature screening to make sure he showed no early signs of COVID-19 before entering the hospital.

The man refused, became agitated and began angrily shouting, pulling out his camera to record the guard and hospital staff.

The scene got so tense that San Antonio police were called, but the man — whose identity and reason for wanting to enter the hospital weren’t included in a police account of the incident — stormed off in anger before the officer could arrive.

It was, relatively speaking, a small blow-up, but Texas hospital workers and health care officials say incidents like it have been rising in both number and intensity this summer as tensions boil during the delta-fueled fourth surge in COVID-19 hospitalizations.

“Our staff have been cursed at, screamed at, threatened with bodily harm and even had knives pulled on them,” said Jane McCurley, chief nursing executive for Methodist Healthcare System, speaking at a press conference five days after the incident in the children’s ER. “It is escalating. … It’s just a handful at each facility who have been extremely abusive. But there is definitely an increasing number of occurrences every day.”

Nurses and hospital staffers are historically vulnerable to workplace violence due to the nature of their jobs, where they deal with people who are having bad reactions to street drugs or mental breaks and often have to give bad news to patients or family already in extreme pain or emotional distress.

Half of all Texas nurses reported verbal and physical abuse at work in 2016 - the last year Texas health officials surveyed them about it.

But the pandemic has exacerbated the stress that can escalate into threats and violence, as people are now contending with not just the virus but also job loss and other stresses, said Karen Garvey, vice president of patient safety and clinical risk management at Parkland Health & Hospital System in Dallas.

Garvey said confrontations at Parkland just this year have included “people being punched in the chest, having urine thrown on them and inappropriate sexual innuendos or behaviors in front of staff members. The verbal abuse, the name-calling, racial slurs … we’ve had broken bones, broken noses.”

Visitors and patients assaulting hospital staff “was an epidemic before the pandemic — it was just silent to the public,” she added. “Health care workers have been dealing with this for years, and it’s become more pronounced with the COVID pandemic.”

A similar phenomenon emerged last year when retail and grocery workers became front-line enforcers of mask mandates and limits on gatherings and indoor activities. And it resurfaced last month when parents aggressively confronted teachers at schools over oft-changing mask rules.

But unlike airlines, which can permanently ban passengers, hospitals are more limited in how they can respond or prevent those instances.

A 2013 Texas law made it a felony to assault an emergency room nurse, but legislation that would have expanded that to include nurses in other areas of a hospital died in the Texas Senate earlier this year. A bill addressing the issue is currently being considered in Washington by the U.S. Congress.

With hospitals reporting historic nursing shortages as the pandemic drags on, the fear is that the “alarming rate” of escalation will be the last straw for nurses who are physically worn out after fighting a pandemic for 18 months, thin on compassion for people who need care after choosing not to be vaccinated and afraid for their own personal safety, said Houston pediatrician Dr. Giancarlos Toledanes.

“With the escalation of this violence toward health care workers, we’re going to lose the workers that are deemed essential,” Toledanes said. “If the problem continues to compound, then I think it’s going to make it much more difficult to staff these hospitals.”

The Texas Department of State Health Services doesn’t track incidents of aggression against hospital staff outside of its regular surveys, the next of which will be done next year, a spokesperson said.

But as health officials across Texas watch hospital ICUs and pediatric units overflow with record numbers of mostly unvaccinated people, they say the surge in aggression toward health care workers is obvious.

Many of the problems being reported in recent months include disagreements over masking and screening protocols that people don’t have to follow in other places, particularly after most mandatory protocols were banned in recent months by Gov. Greg Abbott, officials said.

Confrontations are sometimes caused by hours- or dayslong waits in emergency rooms that are so full of COVID-19 patients that there is no room for anyone else, health care workers said.

“Tempers are high,” said Carrie Kroll, director of advocacy for the Texas Hospital Association. “To the point where some systems are putting a security guard at check-in because family members are getting so abusive over the masking and some of the other screening things they need to do.”

Families are often upset when they can’t visit someone due to COVID-19 rules that limit the number of people who can be bedside or even come inside the hospital, said Serena Bumpus, director of practice at the Texas Nurses Association.

“When our family members are sick, we want to be there by their side, and it’s not that easy to be by our loved one’s side anymore because of this increase in the number of COVID patients in our facilities,” she said.

At the Katy campus of Texas Children's Hospital west of Houston, Toledanes said some parents get verbally abusive over rules that require them to wait for COVID-19 test results before more than one parent is allowed into a room with a sick child.

“With their child in the hospital and they’re the only ones handling everything, it obviously gets stressful,” he said. “It’s escalated a lot more, especially now that we’ve gotten a little bit stricter with our policies” due to the surge.

The threats follow health care workers online as well, and often have to do with philosophical differences over what have become political hot buttons such as masking and vaccinations, Toledanes wrote in a recent column for the online medical magazine MedScape.

At Parkland, some of the administration’s actions to protect the workers include a staff of six mental health peace officers — known as the Law Enforcement Intervention for Environmental/Patient Safety staff — who are specially trained to respond to high-risk incidents, Garvey said. Administrators have developed a flagging system in the patient record which identifies patients who have been identified as known risks to staff, she said.

Some hospitals have hung signs in hallways reminding families to be courteous and patient with the overworked staff.

In mid-August, the escalating reports prompted the Texas Hospital Association to take to social media with an image of an exhausted nurse’s face, mask pulled below her chin.

“Don’t forget the person behind the mask,” the image reads. 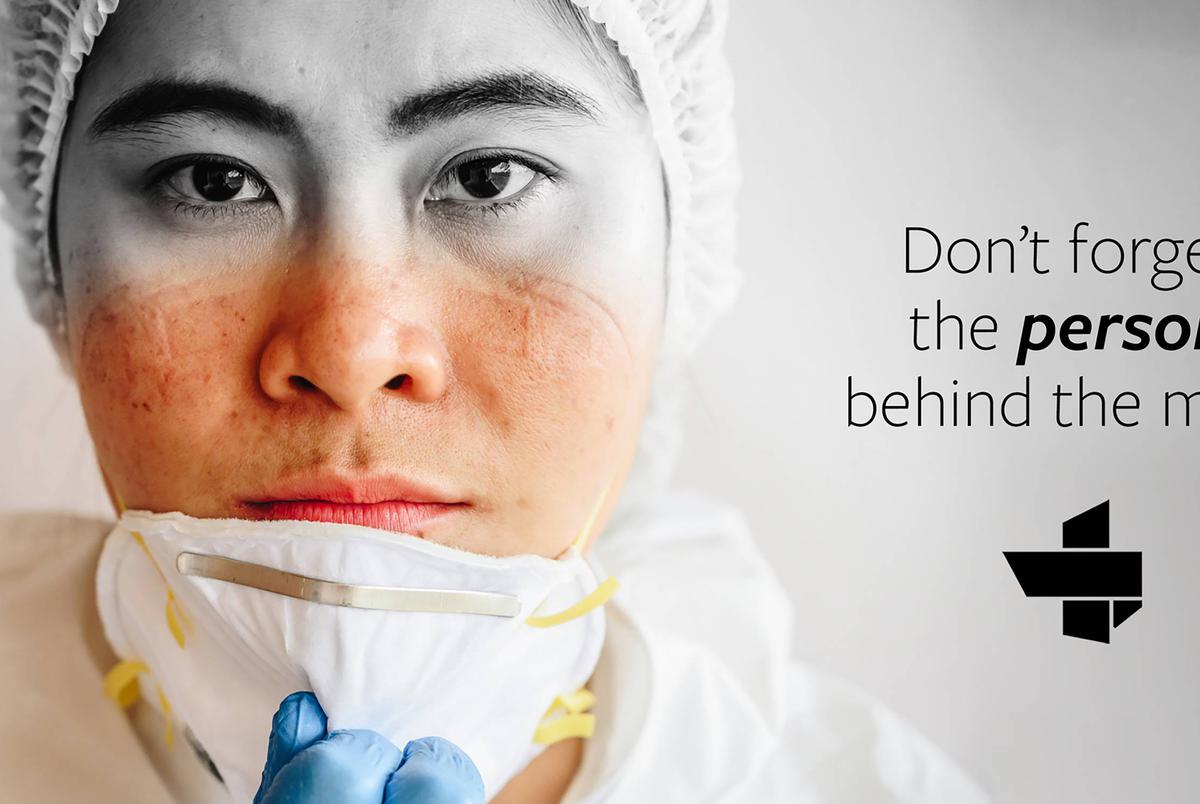 The Texas Hospital Association distributed this message on social media in response to a surge in verbal and physical attacks on medical workers. Credit: Gorodenkoff Productions OU
Ad

McCurley said that the increasing violence this year is made worse by the contrast in attitudes workers are seeing now compared with a year ago, when the public seemed to understand that nurses and hospital staff were standing between them and the deadly pandemic.

“We were seen as health care heroes and our community responded with love and support, food and gifts, drive-by parades, buses and motorcycles and airplanes, and we felt so much love and support. It gave us the courage to go in and face our own fears of the unknown in the beginning,” McCurley said at the August press conference. “Today, those health care workers are experiencing abusive behavior by patient families. It’s unfathomable that it’s occurring, and it has to stop.”

Disclosure: Texas Children's Hospital and the Texas Hospital Association have been financial supporters of The Texas Tribune, a nonprofit, nonpartisan news organization that is funded in part by donations from members, foundations and corporate sponsors. Financial supporters play no role in the Tribune's journalism. Find a complete list of them here.