Owner seeks justice, answers after dog shot in the head with an arrow

South Side home unlivable after contractor removes roof, walks off the job

Get in on these exclusive Insider Deals!

Sign up for The Brief, our daily newsletter that keeps readers up to speed on the most essential Texas news. We've got full coverage of redistricting in Texas. Want to see which districts your home is in? Check out the new Texas political maps here.

Texas Republicans are on the verge of creating a newly competitive state House seat in the Rio Grande Valley as they push to go on the offensive in South Texas next year.

The seat representing House District 37 was made possible by a GOP amendment to the proposed map that passed the House by just two votes early Wednesday morning — and blindsided the Valley lawmakers whose districts would be the most affected. State Rep. Eddie Lucio III, D-Brownsville, denounced the amendment by state Rep. J.M. Lozano, R-Kingsville, as a "disingenuous, last-minute attempt to do a grab."

Democrats have long dominated the Valley. Yet the state's Republicans are determined to pick up seats in the overwhelmingly Hispanic region after President Joe Biden underperformed there last year, and the new district is primed to be a battleground. Biden would have carried it by only 2 percentage points.

The current House District 37, represented by state Rep. Alex Dominguez, D-Brownsville, is anchored in Brownsville and contained within Cameron County. The new district would carve out most of Brownsville — placing Dominguez in a different district —and instead be anchored in another Cameron County city, Harlingen, while adding all of Willacy County to the north.

Biden won the current iteration of the district by nearly 18 percentage points. The new version would be made more competitive largely by drawing some Biden voters, many of whom are Hispanic, into surrounding districts HD-35 and HD-38, making those two considerably more blue. The estimated share of eligible voters in HD-37 who are Hispanic would decline from 86% to 78%. 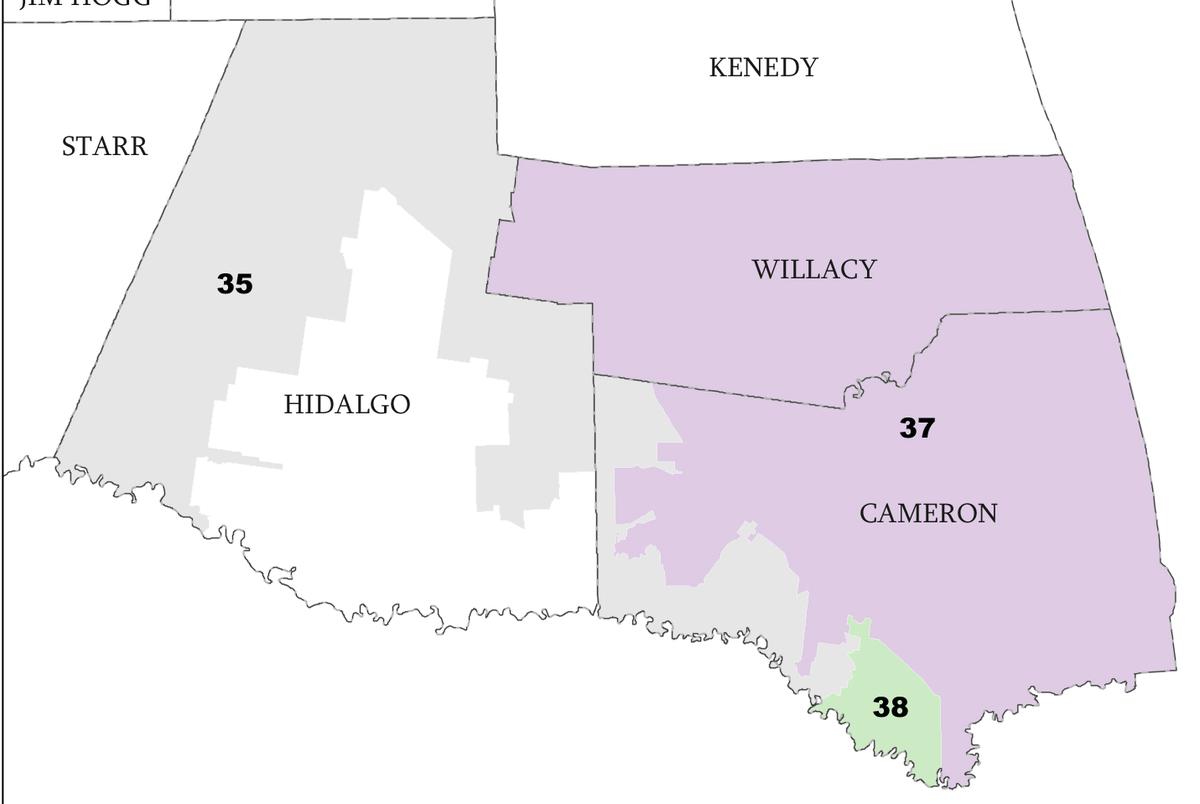 The new version of House District 37 would carve out most of Brownsville and add all of Willacy County to make a more competitive seat. Credit: Texas Legislative Council

On Thursday, the first Republican candidate announced for the seat: Janie Lopez, vice president of the board for the San Benito Consolidated Independent School District. Her announcement played up her ability to win in the general election, saying she is "well-versed" in campaigning and will be a "strong candidate who would ensure conservative values win" in November.

Although the map is unlikely to see major additional changes since the House approved it Wednesday, frustration continued to rage in the days after Lozano's amendment. State Sen. Eddie Lucio Jr., D-Brownsville, called out Lozano repeatedly during a Senate Redistricting Committee meeting Friday, saying this is his fourth redistricting session and he has "never seen such blatant disregard for the process."

"I'm extremely disappointed with Rep. J.M. Lozano for mistreating my members down in the Valley," said Lucio, whose son is state Rep. Eddie Lucio III. "Yes, they got the votes, but don't step on people on the way to passing something as significant as a redistricting plan."

A short time later, the Senate Redistricting Committee advanced the House map proposal without any changes. Eddie Lucio Jr. voted against it — the first time he has ever opposed a redistricting map that came over from the House, he said.

During the House floor debate over Lozano's amendment Wednesday, Lozano, who represents a district north of the Rio Grande Valley, admitted he filed it at the last minute, "about 10 minutes before the deadline" Sunday. He said it was prompted by discussions with people he used to represent in Cameron County. Lozano last represented the county as a Democrat in the early 2010s, when redistricting placed him in a redder district without Cameron County and he switched parties.

"Basically what occurred is people in Cameron County began to hear that there may be vacancies in seats," Lozano said, referring to Eddie Lucio III's recent retirement announcement and a potential congressional run by Dominguez. "They saw the opportunity to be able to draw a district that’s competitive. It’s not affecting an incumbent, and that’s basically — there was the opportunity to do this. It was at the very last minute.”

Dominguez and Lucio objected vehemently, grilling Lozano over his motivations for the amendment. Lozano conceded he had not talked to any of his colleagues affected by the amendment until that day, declined to name any of the people who had purportedly lobbied him for the amendment and resisted a request by Dominguez for a one-hour recess to talk over the amendment privately.

"This is not minor tweaks," Lucio said. "This is very disingenuous. ... This can't be for the greater good."

The amendment initially passed by a vote of 73-69. After a verification vote was requested, the margin narrowed even more, to 72-70.

The full map proposal went on to pass the chamber later Wednesday morning, with Lucio and Dominguez voting against it. However, several other Democrats from the Valley voted for it.

Many Democrats have denounced the full map as discriminatory. They note that while people of color accounted for 95% of the population growth in the state over the last decade, the number of House districts in which white people made up the majority of eligible voters would grow by six to 89. There are 150 seats total in the state House.

As for the race for the new battleground seat, it is unlikely Lopez will have the GOP primary to herself. Indian Lake Mayor James Chambers said Thursday he is "very much interested" in the seat and could have an announcement next week.

While Eddie Lucio III is not seeking reelection, the likely map complicates life for Dominguez. He has been drawn into the new House District 38, a solidly blue seat where a strong 2020 primary challenger to Eddie Lucio III, Erin Gamez, is already running again. Dominguez has been considering running for another office, including the 34th Congressional District, where U.S. Rep. Filemon Vela, D-Brownsville, is retiring. But that primary is up in the air as neighboring U.S. Rep. Vicente Gonzalez, D-McAllen, considers running for reelection in Vela's district instead of his own, which is set to become more competitive for Republicans in redistricting.

Dominguez "remains committed to serving his community and continuing public service," his office said in a statement Wednesday. "He has been fielding a number of exciting phone calls about opportunities for this cycle. Stay tuned."