4 warnings, a watch and 4 advisories in effect for 16 regions in the area

4 warnings, a watch and 4 advisories in effect for 16 regions in the area

RECALL: Some Jif peanut butter products could be contaminated with salmonella

‘We need a miracle’: Two San Antonio animal shelters out of space, in dire need of foster families

A new Texas law designed to limit how race-related subjects are taught in public schools comes with so little guidance, the on-the-ground application is already tying educators up in semantic knots as they try to follow the Legislature’s intent.

In the most striking instance so far, a North Texas administrator informed teachers last week at a training session on House Bill 3979 that they had to provide materials that presented an “opposing” perspective of the Holocaust. A recording of the Oct. 8 training at Carroll Independent School District in Southlake, obtained by NBC News, has reignited the debate over the so-called “critical race theory law.”

“Just try to remember the concepts of [House Bill] 3979,” Gina Peddy, Carroll ISD ’s executive director of curriculum and instruction, is heard telling teachers on that recording. “And make sure that if you have a book on the Holocaust, that you have one that has an opposing — that has other perspectives.”

It’s not the first time the Carroll school district in Southlake — the affluent suburb that sits between Fort Worth and Dallas — has made news with its interpretation of the new law, which is an attempt to keep critical race theory, or CRT, an academic discipline usually taught at the university level, out of schools. Critical race theory's central idea is that racism is not something restricted to individuals. Instead, the theory contends that bias is something embedded in policies and legal systems.

Two weeks ago, the Carroll school board voted 3-2 to reprimand a fourth grade teacher who had an anti-racist book in her classroom after a parent complained about it last year. And Southlake’s earlier struggles with a school diversity and inclusion plan — as well as how parents opposed to the plan started a political movement there — were the subject of a seven-part NBC podcast released earlier this year.

The Texas law states a teacher cannot "require or make part of a course" a series of race-related concepts, including the ideas that “one race or sex is inherently superior to another race or sex,” or that someone is “inherently racist, sexist, or oppressive” based on their race or sex.

Since Texas Gov. Greg Abbott signed the anti-critical race theory bill into law June 15, reports of schools struggling to comply with it have surfaced, most notably in Southlake.

Since then, one Carroll teacher covered a classroom library with yellow “DO NOT ENTER” tape. Last week, NBC reported that teachers there have been given scoring tools known as rubrics. Those scoring sheets, also obtained by The Texas Tribune, ask teachers to move through a complicated chart to evaluate library offerings to make sure they are in compliance with the new state law. 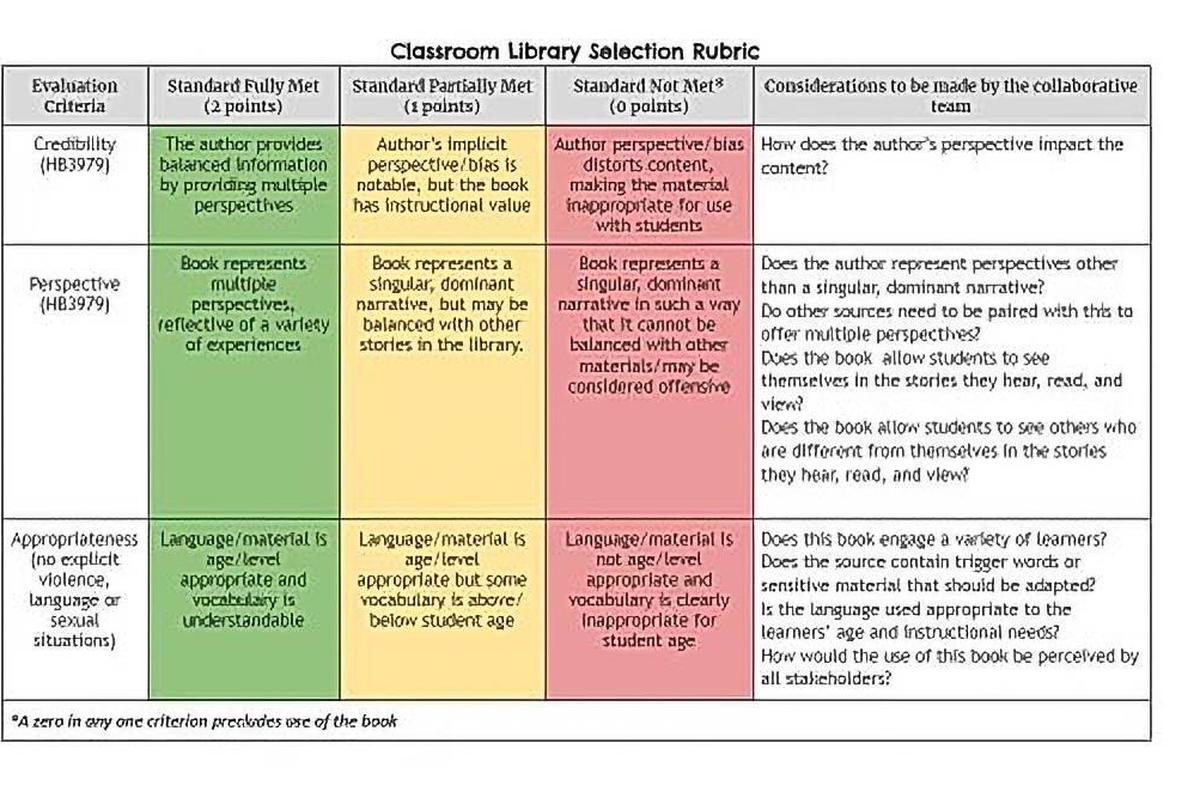 The cards ask teachers to consider whether an author of each book has provided multiple perspectives. If an author “provides balanced information by providing multiple perspectives,” the book is given a maximum of two points. A book may get zero points if the “author perspective/bias distorts content, making the material inappropriate for use with students.”

In one email sent to teachers, also obtained by the Tribune, Carroll ISD administrators told teachers that classroom libraries could not be used until they have been vetted, using the rubrics.

After news surfaced this week about Southlake’s Holocaust guidance to teachers, state Sen. José Menéndez, D-San Antonio, wrote a letter Thursday to Mike Morath, the Texas Education Agency commissioner, requesting a review of how school districts are implementing the law to “refute hateful and racist rhetoric in our Texas public schools.”

“When this bill passed legislators warned that racist attacks would occur. It is our job to take every step possible to ensure an open and diverse forum, without subjecting our children to racism and hateful rhetoric,” Menéndez wrote.

He added, “School administrators should know the difference between factual historical events and fiction. ... No legislation is suggesting the action this administrator is promoting.”

Paul Tapp, attorney with the Association of Texas Professional Educators, said his organization has received questions from teachers because they don’t know what they can teach. A biology teacher asked if they should give equal time to creationism and evolution.

“These are two good examples of what the dangers of this kind of law are,” Tapp said. “The point of public education is to introduce the world to students. It's not there to protect students from the world.”

Carroll ISD Superintendent Lane Ledbetter quickly clarified late Thursday that the comments made in the training “were in no way to convey that the Holocaust was anything less than a terrible event in history.”

“As we continue to work through implementation of HB3979, we also understand this bill does not require an opposing viewpoint on historical facts,” Ledbetter said.

Still, Carroll is not the only district in the state struggling with how to conform to the new law.

In Katy Independent School District earlier this month, administrators postponed an event by critically acclaimed author Jerry Craft after parents claimed his books "New Kid" and "Class Act" promoted critical race theory. The district removed the books, reversed itself and rescheduled the author event after a review committee deemed the books did not contain offensive material.

​Katy ISD did not respond to an interview request.

In June, in what seemed to be the first application of HB 3979, McKinney school officials ended their students’ participation in the nationwide Youth and Government class. A McKinney social studies curriculum coordinator wrote to educators that “in light of” the new law’s ban on political activism and policy advocacy, “we will no longer be allowed [to] offer Youth & Government as an elective course for credit.”

The cancellation of the elective course appeared to be a misapplication and one of the first instances that resulted in educators trying hard to understand the new law. So far, the law only applies to required social studies classes, not electives like the McKinney class. State Rep. Steve Toth, R-The Woodlands, the bill’s author, said in June that the Youth and Government elective “doesn’t have anything to do with lobbying members, so there is no reason [McKinney] would have to cancel it.”

Following the Legislature’s intent may get even more complicated for schools, teachers and parents in the coming months. This December, Senate Bill 3, authored by state Sen. Bryan Hughes, R-Mineola, and passed in the state’s second special session in August, will place more restrictions on a school’s curriculum.

SB 3 says that at least one teacher and one campus administrator at each school must undergo a civics training program. Also, it says teachers cannot be forced to discuss current controversial topics in the classroom, regardless of whether in a social studies class or not. If they do, they must not show any political bias, the law says.

“What I would hope most of all is that school districts will actually read the law, and apply the law as written and not go beyond what the law actually requires them to do,” Tapp said. “As soon as I read the bills, I expected that this would be the result of it, and I don't think we've heard the last of it.”

Disclosure: The Association of Texas Professional Educators has been a financial supporter of The Texas Tribune, a nonprofit, nonpartisan news organization that is funded in part by donations from members, foundations and corporate sponsors. Financial supporters play no role in the Tribune's journalism. Find a complete list of them here.