Man found fatally shot inside vehicle on South Side identified

Woman killed in North Side fire identified by authorities

On the morning of Jan. 14, construction worker Juan Reyna said goodbye to his wife and two stepchildren in San Antonio and headed to Uvalde in his white Chevrolet pickup with a work crew of five men to do a home renovation job.

But Reyna and his crew didn’t make it to the job site. Border Patrol agents pulled them over near Uvalde after someone called the nearby Border Patrol station to report a truck picking up “a group of illegal aliens.” The other men in the truck, who Reyna said he didn’t know well before recruiting them for the project, tried to flee the scene and were eventually arrested.

The agents found a gun and a magazine full of bullets in the truck, according to court records; Reyna, 48, said the weapon wasn’t his. Reyna and his lawyer say they don’t know who the gun belongs to.

Reyna, an undocumented immigrant from Mexico, was taken into custody by U.S. Immigration and Customs Enforcement and placed in the agency’s detention center in Pearsall, where he’s remained for 11 months as he fights the government’s efforts to deport him to Nuevo León, the Mexican state he left more than two decades ago. He hasn’t been charged with a crime.

An ICE spokesperson didn’t say why authorities have been holding him in custody for nearly a year, saying it “does not comment on pending litigation.” But according to Reyna’s lawyer, ICE attorneys believe Reyna is a flight risk and a threat to public safety because of a previous deportation and a 2000 misdemeanor in Dallas.

“I just want to be free and appreciate time with my family,” Reyna said in a phone interview from the detention center. “I feel sad because my wife is going through a hard time and she doesn’t have my support because I'm inside.”

When President Joe Biden came into office, he began to roll back some of the Trump administration’s strict immigration policies, including the 2017 policy memo that immigration authorities arrest every undocumented person they find and speed up deportations. An estimated 11 million undocumented immigrants currently live in the U.S., including 1.6 million in Texas.

In February, the Biden administration issued an interim memorandum that instructed immigration agents to focus on detaining undocumented immigrants suspected of terrorism or espionage, those who entered the country illegally after Nov. 1, 2020, and those convicted of an aggravated felony. If a person didn’t fall into one of those categories, officers needed approval from a senior manager to explain why the immigrant should be deported, according to the memo.

The memo signaled to immigrant rights advocates that many undocumented immigrants who have lived in the country for decades would not have to be in constant fear of deportation. That includes immigrants like Reyna, whose misdemeanor conviction in Dallas for solicitation of prostitution led to him voluntarily returning to Mexico before crossing the border again soon after.

But advocates say that hasn’t been the reality since Biden was inaugurated.

“On issues like [immigrant detainees], we're not seeing a whole ton of change,” said César Cuauhtémoc García Hernández, an immigration attorney and law professor at Ohio State University. “And we are returning to sort of a pre-pandemic normal, rather than a stark departure from the Trump administration.”

On Oct. 1, a recorded 22,129 immigrants were in ICE detention centers, a 56% increase since Biden took office, according to statistics compiled by Syracuse University’s Transactional Records Access Clearinghouse, also known as TRAC. Overall, 75% of ICE detainees have no criminal record — ICE classifies a person as a convicted criminal even if the crime is as innocuous as not keeping a dog on a leash, according to TRAC’s analysis.

At the start of the coronavirus pandemic in March 2020, the number of people in ICE detention was 38,000, according to TRAC’s analysis. Just before Biden took office in January 2021, the number of detainees decreased to as low as 15,000 — a 60% drop. That downward trend continued for the first month of the Biden administration before the number of ICE detainees started to rise.

“We did have hope for the Biden administration that they would at least very significantly limit or lessen the use of immigration detention,” said Reyna’s lawyer, Kathrine Russell. “Unfortunately, that does not seem to have happened whatsoever.”

The Biden administration’s interim memo was replaced in September with another memo, which went into effect on Monday and gives ICE officers more discretion than they had under the previous memo. It says agents should also consider the impact that deporting an immigrant would have on the person’s family, but it doesn’t require agents to follow the guidance.

“The civil immigration enforcement guidance does not compel an action to be taken or not taken. Instead, the guidance leaves the exercise of prosecutorial discretion to the judgment of our [p]ersonnel,” says the memo, written by Department of Homeland Security Secretary Alejandro Mayorkas.

“The reality is it's just a piece of paper until it's turned into decision-making in specific cases, by ICE officers,” said García Hernandez, the Ohio State law professor.

Sameera Hafiz, policy director for the Immigrant Legal Resource Center — which is a national immigrant rights advocacy group that also provides legal training — said the Biden administration’s record on immigration hasn’t been significantly different from Trump’s in some ways.

“I have my whole life here”

Reyna has a court hearing Friday that could end with a judge issuing a deportation order or canceling his removal order and allowing him to legally stay in the country. He said ICE officers have repeatedly asked him to voluntarily agree to be deported, but he has refused.

“I believe in God and I have faith in God, even if this ICE officer told me I'm going to be [in detention] longer,” he said. “He asked me if I was ready to go back to Mexico. I told him no because I have my whole life here, my wife, kids and my job is here.”

He said he crossed the border in 1998 and made his way to Dallas, where he found work as a welder and carpenter for a construction company that builds houses and apartments. He said his original plan was to work in the U.S. for a few years and save enough money to open a business in Mexico. But as time went on, he said he got used to life in the U.S.

His company relocated him to San Antonio, where in 2015 he met Guadalupe Martinez, now his wife, at a Mexican restaurant where she worked as a waitress, and they married in 2016.

Martinez said when Reyna called to tell her he’d been arrested by Border Patrol, “my world started falling apart because he’s the head of the household … Then, the kids start to cry, asking a lot of questions, ‘Why is he in jail? Why was he arrested?’ And I can't find the words to explain to them what happened.” 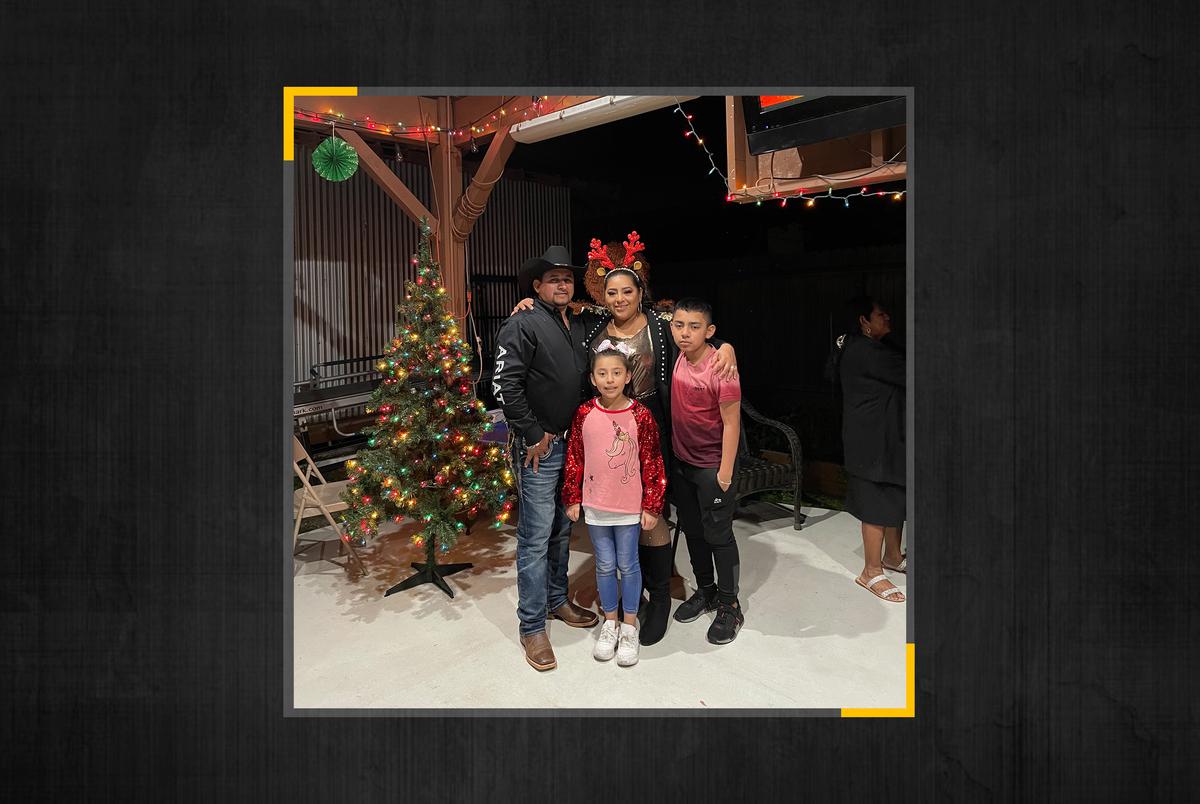 Her two children from a previous relationship had grown very close to Reyna, she said. His detention has caused them to develop an anxiety disorder that has affected their schooling, according to a report conducted by a psychologist who analyzed the children’s mental health in November.

Her 9-year-old daughter “changed from a happy, motivated good student to failing to do her homework, crying at school, and falling asleep,” the report says, adding that her 13-year-old son reports feeling restless and unable to concentrate. “He repeatedly said that they needed Juan to make the family feel safe,” the report says.

In the time Reyna has been in the detention center he has become religious, he said. Every night he goes to Bible study, sings hymns with the choir and makes prayer beads for his fellow detainees. They’ve created an unofficial support group, imagining reconnecting with their families in the U.S. or their home countries, he said.

He said he tells them: “Just wait, have faith in God, who will be the one to let me out of here and will grant me a miracle.”