Where to find the best hot dogs in America, according to Bloomberg

Altercation in North Side apartment leads to stabbing; 1 hospitalized in critical condition

Top Texas Republicans used a Houston-area rally with former President Donald Trump on Saturday to cheer on a potential comeback campaign by Trump, showing how much sway he still holds with the state Republicans over a year after leaving office.

Speaking before Trump at the rally in Conroe, two of the most pro-Trump state leaders, Lt. Gov. Dan Patrick and Agriculture Commissioner Sid Miller, made clear they want the former president to run again. Miller touted himself as the first statewide official to endorse Trump for 2024 and said Republican candidates everywhere should be asked about it, suggesting it will reveal "who the real patriots are."

“I don’t know what’s happening in 2024, but I have a feeling if 45 wants to be 47, America will lift him up again," Patrick said, later introducing Trump as the "45th and soon-to-be 47th president of the United States."

Trump has not announced whether he is running again in 2024 but has teased a potential run for months. At the rally, he repeatedly attacked the Democrat who defeated him, President Joe Biden, and promised Republicans would "kick the Biden crime family out of the White House in 2024."

Trump remains very popular among Republicans in Texas, the largest red state in the country, and the rally was yet another reminder. Speaking before Trump, the state party chair, Matt Rinaldi, hailed Trump's influence as he recalled how he used to be disappointed with the GOP as an activist.

"The Republican Party of Texas now is no longer that weak and compromising party," Rinaldi said. "We are the bold party of Donald Trump and will stay that way.”

The rally also showed how some Texas GOP leaders are still helping fuel false claims that the 2020 election was stolen from him. Trump alluded to the topic shortly after taking the stage, saying Texas is "never, ever turning blue — that is, unless they rig the election."

While Patrick was speaking, he was confronted by chants that sounded like, "Fix 2020." 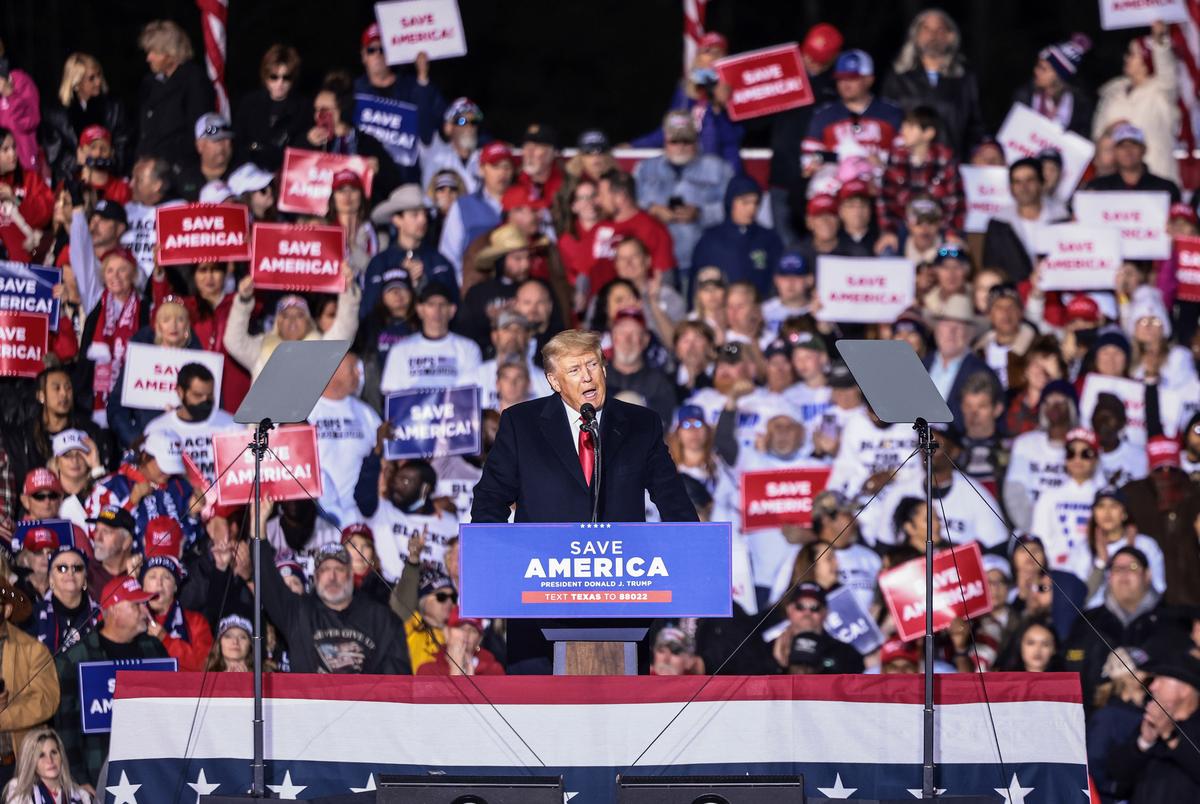 Former President Donald Trump speaks at a rally in Conroe on Jan. 29. Credit: Jordan Vonderhaar for The Texas Tribune

Trump's false claims about the 2020 election culminated in the deadly Jan. 6 riot at the U.S. Capitol. At the rally, Trump spoke about the people who have faced criminal charges in connection with that day while imagining a second presidency.

Republican candidates continue to jockey for Trump's support, especially ahead of the March 1 primary in Texas when some statewide officials are facing challengers. Among them is Gov. Greg Abbott, who faced some boos when he was introduced to speak before Trump. Abbott came out to a video from his campaign highlighting Trump's backing, and the former president later reiterated Abbott has his "complete and total endorsement."

Trump also expressed his support again for Attorney General Ken Paxton, who is in a hotly contested primary, facing challenges from Land Commissioner George P. Bush, former state Supreme Court Justice Eva Guzman and U.S. Rep. Louie Gohmert of Tyler. Gohmert was in attendance and Trump singled him out as a "wonderful guy" and a "friend of mine from day one."

Patrick in particular has Trump's ear when it comes to endorsements — and the former president spoke openly about it. He said Patrick calls him asking him to endorse candidates and he responds, "Absolutely, Dan. Whatever you want." Patrick, Trump added, has "gotten a hell of a lot of endorsements" out of him.

Patrick chaired both of Trump's presidential campaigns in Texas.