One person dead in shooting near Helotes, SAPD says

WASHINGTON — A political knife fight in the streets of Laredo. An ambitious challenger with powerful allies and formidable fundraising. A longtime congressman who once coasted to reelection facing an existential test amid redistricting in a Democratic primary.

The year was 2004, and in that Laredo race, the challenger was Henry Cuellar.

Eighteen years later, the tables have turned on the now-senior Democrat. He faces a bonafide threat to his political livelihood in the form of attorney Jessica Cisneros, a progressive darling, fellow Laredo native and former intern in Cuellar’s congressional office.

The May 24 primary runoff election is a rematch from two years ago, when Cisneros fell just short of pushing Cuellar to a runoff in 2020. She is challenging him again, and once more, liberal groups are solidly consolidated behind her. Cuellar is undoubtedly formidable, with the backing of some of the party’s top national leaders.

But after an unrelenting slew of bad political news for Cuellar this year, he’s never been more vulnerable.

Prior to the May 3 leak of a U.S. Supreme Court draft ruling that appears ready to overturn Roe v. Wade, the matchup was already attracting the attention of Democratic leaders in a race that embodied the yearslong fight between progressives and pragmatists for control of the party.

But now, Cuellar’s record as the last anti-abortion Democrat in the House has reignited ire from members of the party from across the nation, who are still reeling from the reports that abortion could soon be outlawed in half of the country. On that issue and other policies — unions, border security, and oil and gas — he and Cisneros are at odds. 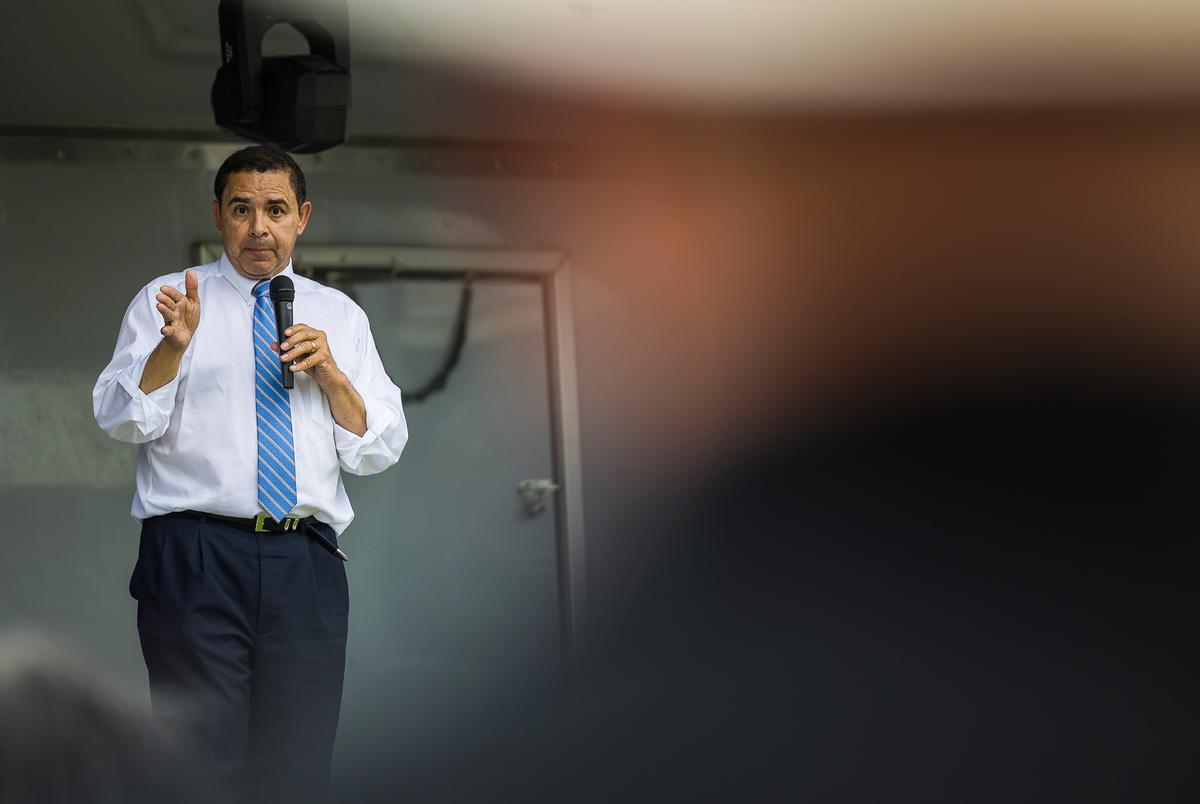 U.S. Rep. Henry Cuellar, D-Laredo, at a Get Out the Vote rally in San Antonio on May 4, 2022. Credit: Chris Stokes for The Texas Tribune

“The stakes are very high,” said Jose Borjon, a Washington-based lobbyist originally from South Texas who once worked for Cuellar and continues to support him.

The Supreme Court leak roiled the race, but Cuellar’s campaign was already injured from when the FBI conducted a mysterious and still unexplained raid on his Laredo home and campaign office weeks before the March primary. Cuellar’s attorney has said the FBI informed him that Cuellar is not a target of an investigation, and Cuellar has denied wrongdoing.

Cisneros capitalized on the news, raising a stunning amount of money for the race.

Six weeks later, Cuellar was unable in March to win the primary outright, falling short of the majority needed to avoid a runoff.

Before the raid, he began the campaign season from a stronger position than two years ago: He raised millions of dollars over the last two years for this race, and he modernized his political operation. Cisneros, too, is an improved candidate this year. She first ran as a 26-year-old fresh out of law school. This time around, she has a more polished presentation and her national progressive supporters are even more determined to take out Cuellar.

“I pride myself on having an ear to the ground and I say that because if the issues we are running on aren’t important to people in the district, there was no way that a first-time, 26-year-old challenger last time around would have come so close to defeating an incumbent that's been in office longer than I’ve been alive, right?” Cisneros said in an interview earlier this month.

Lately, Cisneros has leaned into her stance for abortion rights as a contrast to Cuellar’s record. But in other cases, she softened her rhetoric on some of the positions she took in 2018 that gave her blowback.

For instance, in the last campaign cycle, Cisneros advocated to “split [U.S. Immigration Customs and Enforcement] in half and reassign enforcement functions … to other agencies, including the Department of Justice,” in a candidate survey with 350 Action, a group formed to fight climate change.

This February, Cuellar’s camp seized on that point, saying in a widely viewed television advertisement that her position would be “... leaving us with open borders that would make us less safe and cost us thousands of jobs, putting our security and economy in jeopardy.”

When asked if she still backed that ICE policy from November 2019, Cisneros focused on impact to jobs.

“I would never support any kind of policy or legislation that would take anyone’s jobs away because I, myself, know how difficult it is making ends meet,” she said.

“I know how scary it is for people to think that their livelihood is going to be messed with,” she added.

But Cisneros still embraces her progressivism with abandon.

She describes abortion as health care. She supports a Green New Deal in oil and gas country. And her campaign has hosted a succession of progressive celebrities — including U.S. Sens. Bernie Sanders of Vermont and Elizabeth Warren of Massachusetts, plus U.S. Rep. Alexandria Ocasio-Cortez of New York — who have come to the district to campaign for her.

It is noteworthy whenever a U.S. House incumbent loses reelection in a primary because such losses are so rare. Typically, only a small handful of members lose this way each cycle. The last U.S. House member to lose reelection from Texas was in 2014, when U.S. Rep. Ralph Hall lost the Republican nomination to John Ratcliffe, who went on to serve in Congress and as the director of national intelligence under President Donald Trump.

The two strongest signs of political danger for a Texas U.S. House incumbent are facing a runoff challenge and being outraised by a challenger.

In an interview in the days after the Supreme Court abortion news, Cisneros said her fundraising staff was inundated by donors motivated to oust an anti-abortion Democrat.

And that’s fresh money that came into the Cisneros organization after campaign finance reports showing that by May 4, she had raised $4.5 million over the course of the cycle, compared to Cuellar’s $3.1 million.

In comparison, there is a much quieter Democratic primary in a far more expensive television advertising market in Dallas. The two candidates there, state Rep. Jasmine Crockett and former Congressional staffer Jane Hamilton, have raised $567,000 and $654,000, respectively.

Cuellar allies argue that abortion is a complicated issue in the heavily Catholic region, and that other issues matter more to voters, including border security, which is an issue they anticipate will benefit Cuellar. Cuellar has sided with Republicans in calling for President Joe Biden to keep in place Title 42, a pandemic-era policy that allows immigration officials to expel migrants at the southern border without giving them a chance to seek asylum.

And despite the renewed scrutiny of this race, they argue Cuellar’s work ethic and ties to the community will earn him a 10th term. Borjon, the former Cuellar staffer, told The Texas Tribune that while trying to reach out to Cuellar last week, the congressman briefly stepped aside to take the call while attending a local graduation ceremony in his district — one of at least five Cuellar was scheduled to attend over the weekend.

“Henry Cuellar will show up to anything for anyone, anywhere in the 28th District of Texas,” Borjon said. “He is one of the hardest-working members of Congress that I know.”

Cuellar declined a request for an interview.

Despite the tumult, Cuellar’s powerful allies have doubled down on their support of him.

U.S. House Speaker Nancy Pelosi reiterated her support for Cuellar last week, a statement that enraged and astonished the left in the wake of the Supreme Court developments.

“I'm supporting Henry Cuellar,” she said at a news conference. “He’s a valued member of our caucus.”

At the same time, EMILY’s List, an influential group that works to elect Democratic women who support abortion rights and with whom Pelosi has been closely aligned for decades, is one of Cisneros’ strongest backers. Last week the organization booked about a half-million-dollar television advertising buy to help Cisneros.

Pelosi last week repeated reports that his attorney said Cuellar was not a target of the FBI investigation. She added that anti-abortion Democrats have served in the House before, and his vote was not needed to pass a bill in the House to codify Roe v. Wade into federal law last fall.

“He is not pro-choice, but we didn’t need him,” she said. “We passed the bill with what we had.”

No longer a Democratic bulwark

When Cuellar first won in 2004, an Austin Chronicle recap of that year’s elections around the state described South Texas as a region that “remains the state’s Democratic bulwark.”

The 2020 election shattered that long-held consensus, as Democrats across the region saw their margins shrink to underfunded Republican candidates.

So now for the first time in modern history, South Texas Democrats have to factor the general election into their considerations in choosing their nominees due to the coming Republican onslaught which will be led by either Cassy Garcia or Sandra Whitten, who are competing for the Republican nomination in their own runoff.

In April, political analyst David Wasserman said out loud to the Tribune what many Republican and Democratic operatives were saying privately: South Texas is far more socially conservative than many Democratic-leaning hubs, and many of Cisneros’ biggest supporters don’t live in her district. As such, Cuellar is the more electable contender in the fall, Wasserman and others have argued.

When asked about this notion, Cisneros said her ascent indicates she is more in touch with the district.

“People generally say that about incumbents, right?” Cisneros told the Tribune. “I think the boost that Henry claims to get is one that stems from him being an incumbent, not so much someone that is actually representing the values of the district.”

Patrick Svitek contributed to this report.

Correction, May 22, 2022: An earlier version of this story incorrectly said that 2004 was the last year any Texas Democratic congressmen lost reelection in a primary. The last year that happened was 2012 when Beto O'Rourke beat Silvestre Reyes.