Get in on the latest Insider Deals!

Irma and Joe Garcia, a teacher and her heartbroken husband, are buried together in Uvalde

UVALDE — In the days following the school shooting at Robb Elementary, the streets of this small town were lined by sets of 21.

The 21 bows of gauzy ribbon tied to the thin posts of a black iron gate. The 21 candles glowing from the window ledge of the historic Uvalde Grand Opera House. The row of classroom chairs — 19 small red ones and two taller black ones — looking out onto Getty Street.

At a memorial on the town square, another white cross was added next to the tribute to veteran teacher Irma Garcia, who died in the shooting. The 22nd cross was in honor of Joe Garcia, her husband who died suddenly two days later. The family has said it was on account of a broken heart.

“I know this was too much for you and your poor heart couldn’t take it,” reads a scribbled note on the right-side swell of the blue heart on Joe’s cross. “I will spend the rest of my life fighting for you and mom. Your names will not be forgotten.”

The note is signed “Your daughter, Lyliana” with a small heart drawn next to her name. 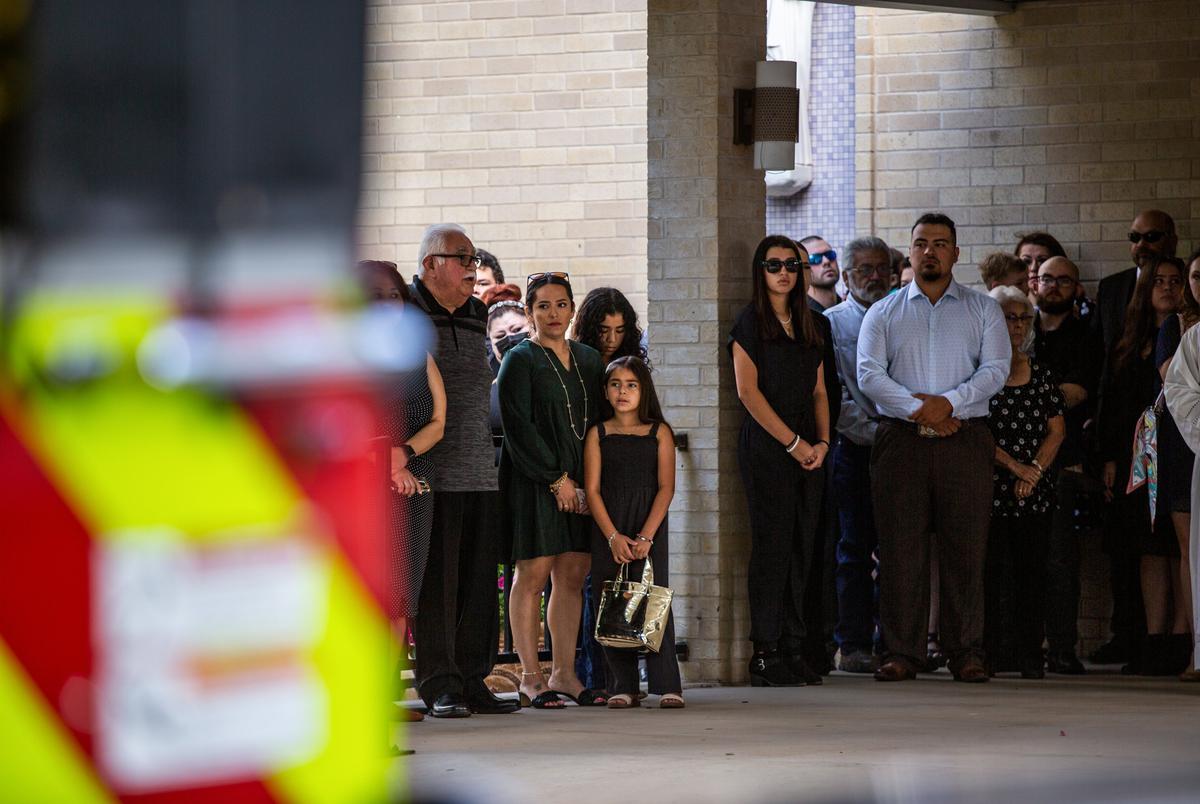 People attend a service for Irma and Joe Garcia at Sacred Heart Catholic Church in Uvalde on Wednesday. Credit: Kaylee Greenlee Beal for The Texas Tribune

On Wednesday, Irma and Joe Garcia were buried side by side in twin brown caskets at Hillcrest Memorial Cemetery in a coupled funeral that captured just how far the tendrils of tragedy can stretch. The May 24 school shooting left 19 families burying children, but it also orphaned the Garcias’ four children.

Hundreds filled the pews at Sacred Heart Catholic Church for a funeral Mass on Wednesday morning during which San Antonio Archbishop Gustavo García-Siller called the couple’s children up to the altar. The four stood together between their parents’ caskets, draped in white sheets, as the archbishop called on the congregation to help sustain them in faith and in love. The couple’s oldest is a Marine who wore his dress blues to the service; the youngest was finishing the seventh grade this year.

The high school sweethearts died days apart a month before they would have celebrated their 25th wedding anniversary.

The Mass — some parts in English, others in Spanish — was closed to press but streamed online.

“You did what you would have done for any of us,” García-Siller said in Spanish, describing how Irma, a lifelong educator, had given to her students “until her last breath.”

Irma Garcia, 48, was days away from wrapping up her 23rd year of teaching — every one at Robb Elementary. She co-taught fourth grade with Eva Mireles, the second teacher who died in the shooting, sharing adjoining classrooms. In social media posts from years before, Garcia celebrated the school’s ritual of welcoming back former students dressed in the district’s maroon school colors for “senior walks” ahead of their graduations.

“Seeing them return to their elementary schools wearing their cap and gown … is the reason every teacher in this district does what they do,” Garcia wrote. “That moment makes all the struggles, long hours, and endless paper work so worth it.”

Joe, meanwhile, had died out of love, García-Siller said.

He was born in Uvalde; she was born in San Antonio. The couple began their relationship in high school, an obituary said, flourishing into a love that was “beautiful and kind.”

Joe, 50, had worked for the H-E-B grocery store for decades, rising from a produce stocker to management, said Juan Silvas, who said he met Joe almost two decades ago. Silvas was in town from Crystal City on Wednesday to relieve local workers. 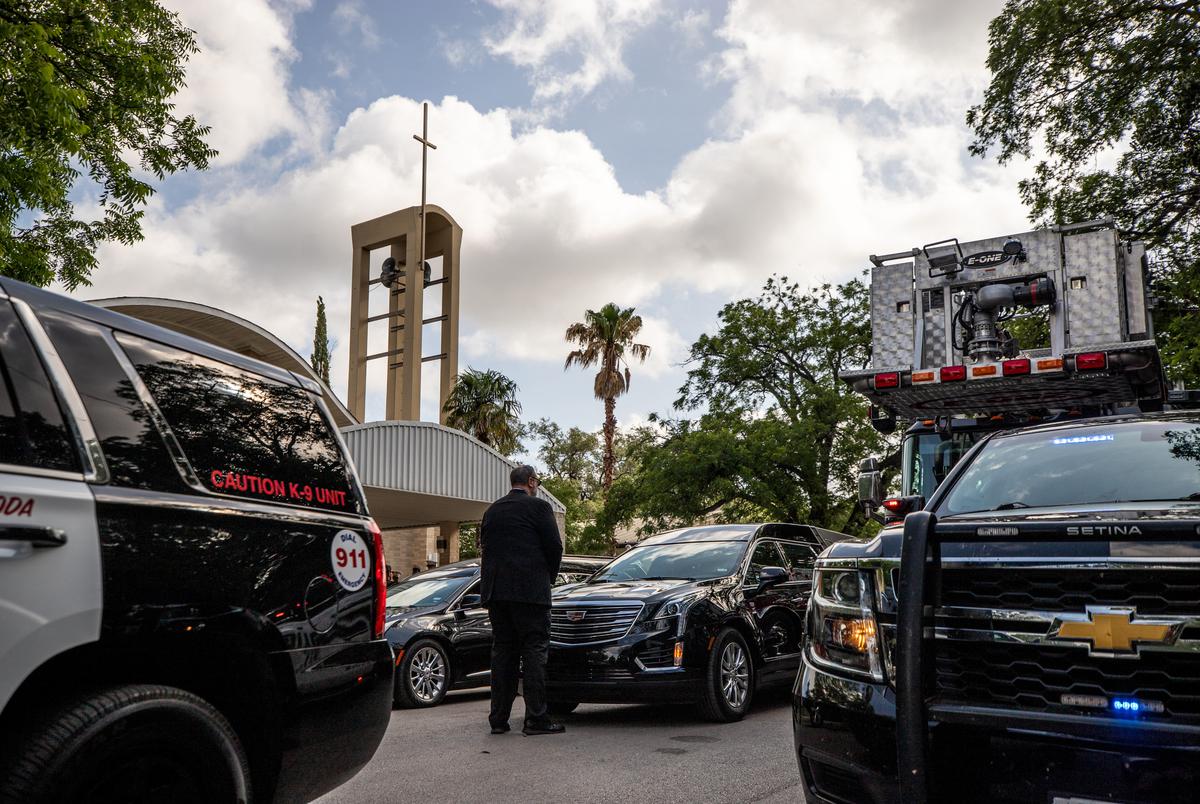 Emergency vehicles sit outside a mass service for Irma and Joe Garcia at Sacred Heart Catholic Church in Uvalde on June 1, 2022. Irma Garcia is one of 21 students and teachers who died after a gunman entered Robb Elementary School, and her husband Joe died from a heart attack two days later. Credit: Kaylee Greenlee Beal for The Texas Tribune 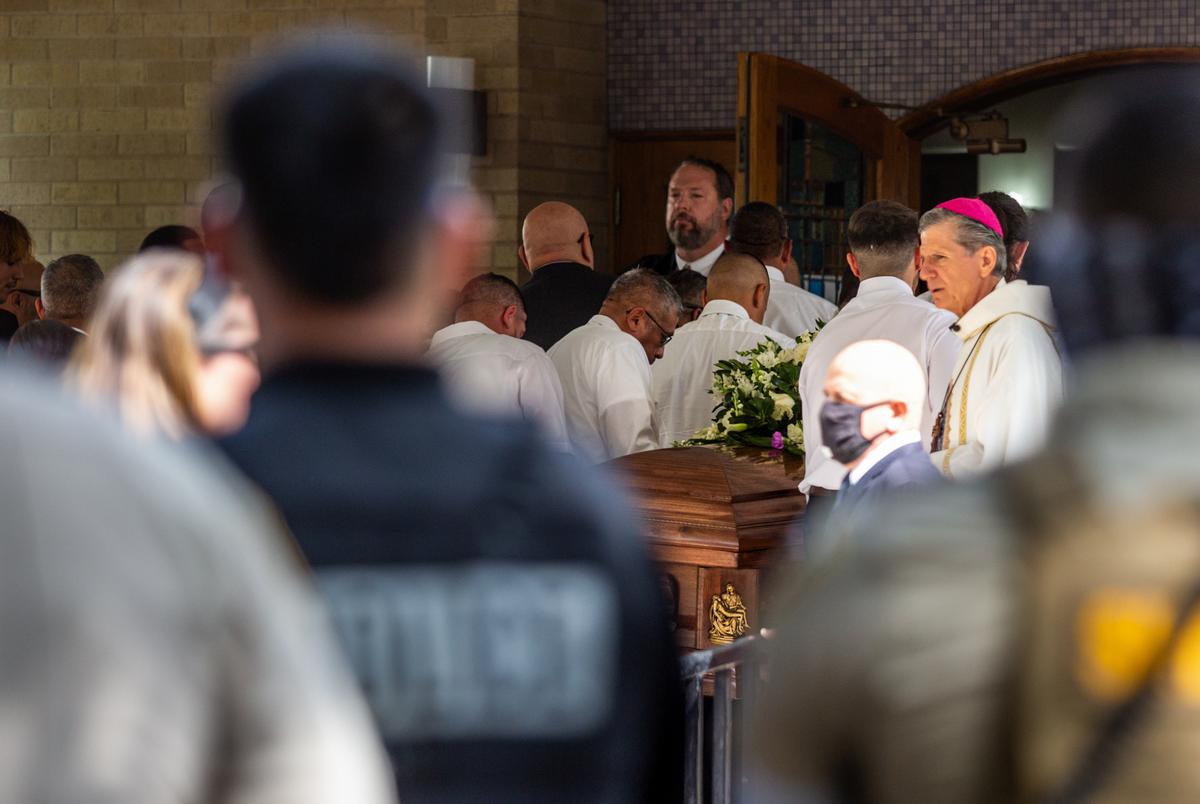 Pallbearers carry caskets into the mass service for Irma and Joe Garcia at Sacred Heart Catholic Church in Uvalde on Wednesday. Credit: Kaylee Greenlee Beal for The Texas Tribune

First: Emergency vehicles sit outside a service for Irma and Joe Garcia at Sacred Heart Catholic Church in Uvalde on Wednesday. Last: Pallbearers carry caskets into the service. Credit: Kaylee Greenlee Beal for The Texas Tribune

The couple represented a cross-section of this mostly Hispanic, working-class community. She was an educator, preparing generations worth of children for life. He kept shelves stocked so neighbors could feed their families.

After the services, a pair of black hearses transported their bodies a mile down the road to Hillcrest Memorial Cemetery, where many of the victims from Robb Elementary will be laid to rest.

Gathered around two large green tents, the mourners included Uvalde educators and district staff who wore dark gray and maroon polo shirts, the district’s “U” logo embroidered on the left side, and H-E-B workers who donned the store’s familiar name tags.

Once all those who gathered had paid their respects, the large white sprays of roses that sat atop each casket were removed. As the undertakers began their work with the Garcia children looking on, the eldest lifted his white-gloved hand in a salute.

He held it until both of his parents were lowered into the ground.

Jason Beeferman contributed to this report.

Disclosure: H-E-B has been a financial supporter of The Texas Tribune, a nonprofit, nonpartisan news organization that is funded in part by donations from members, foundations and corporate sponsors. Financial supporters play no role in the Tribune's journalism. Find a complete list of them here.