Man in wheelchair hospitalized after being hit by SUV

US Army to conduct military training exercise in San Antonio

LAS VEGAS, Honduras (AP) — Children set out hoping to earn enough to support their siblings and parents. Young adults who sacrificed to attend college thinking it would lead to success left their country disillusioned. A man already working in the U.S. who returned to visit his wife and children decided to take a cousin on his return to the U.S.

As families of the more than 60 people packed into a tractor-trailer and abandoned on Monday in Texas began to confirm their worst fears and talk of their relatives, a common narrative of pursuing a better life took shape from Honduras to Mexico.

Fifty-three of those migrants left in the sweltering heat on the outskirts of San Antonio had died as of Wednesday, while others remained hospitalized. The tedious process of identifications continues, but families are confirming their losses.

Each put their lives in the hands of smugglers. News of the trailer full of bodies struck horror in cities and villages accustomed to watching their young people leave, trying to flee poverty or violence in Central America and Mexico.

In Las Vegas, Honduras, a town of 10,000 people about 50 miles south of San Pedro Sula, Alejandro Miguel Andino Caballero, 23, and Margie Tamara Paz Grajeda, 24, had believed his degree track in marketing and hers in economics would open doors to economic stability.

Already together for nearly a decade, the young couple spent recent years applying for jobs with companies. But time and again they were denied.

The pandemic hit, hurricanes devastated the northern part of the country and they grew disillusioned.

So when a relative of Andino Caballero’s living in the United States offered to help him and his younger brother, 18-year-old Fernando José Redondo Caballero, finance the trip north, they were ready. 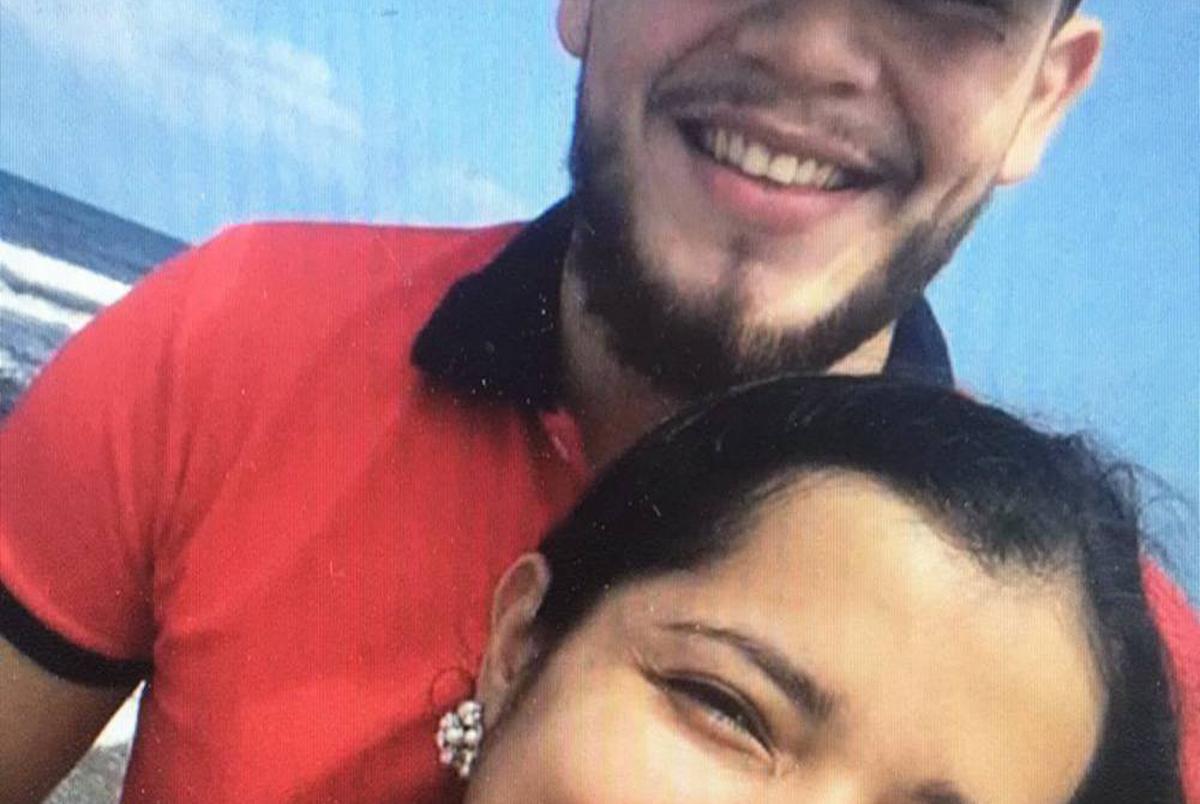 In this undated photo provided by Karen Caballero, her son Alejandro Miguel Andino Caballero and his girlfriend Margie Tamara Paz Grajeda pose for a photo at an undisclosed location in Honduras. The pair along with Caballero's brother Fernando Redondo Caballero were among the dozens of victims found in a hot trailer full of dead migrants being smuggled into the U.S. near San Antonio, Texas. Credit: Caballero Family via AP 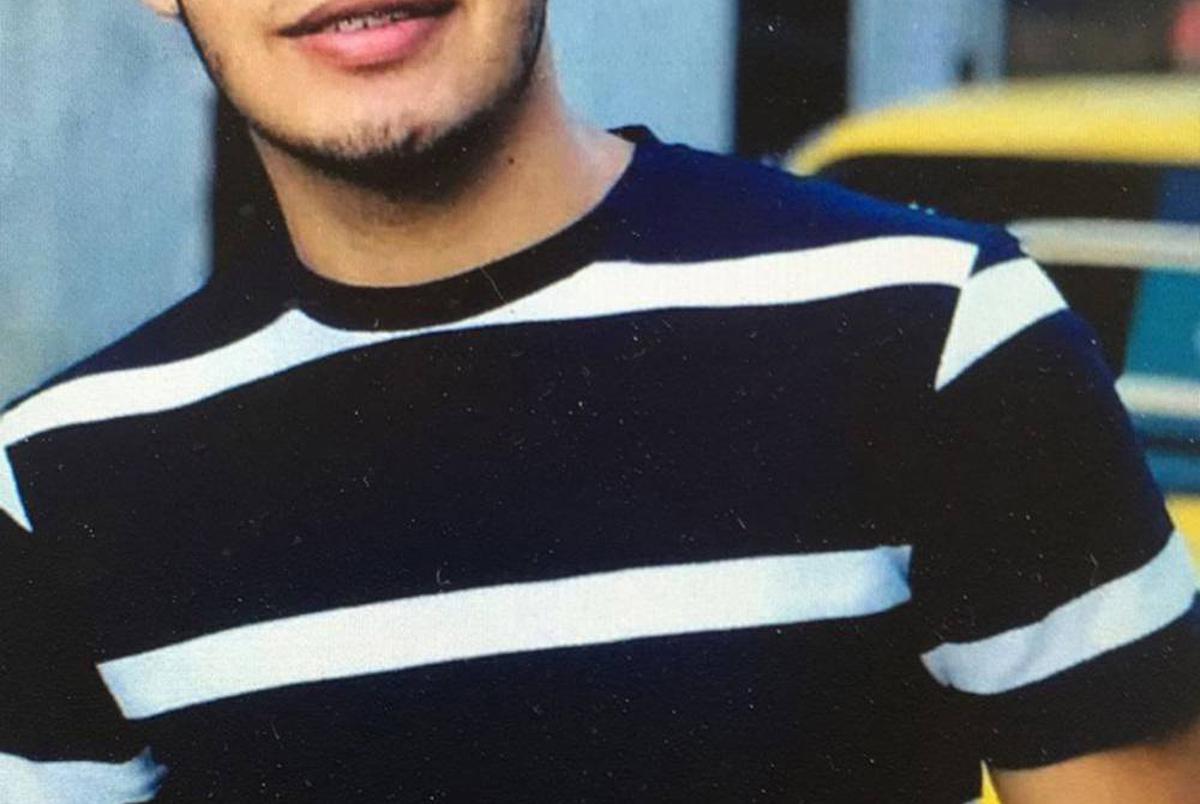 First: Karen Caballero's son Alejandro Miguel Andino Caballero and his girlfriend Margie Tamara Paz Grajeda pose for a photo in Honduras. The pair, along with Caballero's brother, Fernando Redondo Caballero (last), were among the dozens of victims found in a hot trailer full of dead people being smuggled into the U.S. near Lackland Air Force Base in San Antonio. Credit: Caballero Family via AP

“You think that when people have a higher level of education, they have to get more employment opportunities,” said Karen Caballero, the brothers’ mother. “Because that’s why they work, study.”

Caballero did not feel like she could hold them back anymore, including 24-year-old Paz Grajeda, who lived with Alejandro in his mother’s home and who Caballero referred to as her daughter-in-law though they had not married.

When they left Las Vegas on June 4, Caballero accompanied them to Guatemala. From there, the young trio were smuggled across Guatemala and then Mexico in the back of semitrailers.

Caballero last spoke to them Saturday morning. They told her they had crossed the Rio Grande at Roma, Texas, were headed to Laredo and on Monday expected to head north to Houston.

She had just gotten home Monday evening when someone told her to turn on the television. “I couldn’t process it,” she said of seeing the report about the trailer in San Antonio. “Then I remembered how my sons had traveled, that they had been in trucks since Guatemala and the whole stretch in Mexico.”

Caballero was able to confirm their deaths Tuesday after sending their details and photos to San Antonio.

Alejandro Miguel was creative, jovial, known for hugging everyone and being a good dancer. Fernando José was enthusiastic and noble, willing to help anyone in need. He imitated his older brother in everything from his haircut to his clothes. They were soccer fanatics, filling their mother’s home with shouts.

The deaths of her sons and Paz Grajeda, who was like a daughter, are devastating. “My children leave a void in my heart,” she said. “We’re going to miss them a lot.”

Nearly 400 miles away, the prospects for Wilmer Tulul and Pascual Melvin Guachiac, 13-year-old cousins from Tzucubal, Guatemala, had been considerably more narrow.

Tzucubal is an Indigenous Quiche community of about 1,500 people in the mountains nearly 100 miles northwest of the capital, where most live by subsistence farming.

“Mom, we’re heading out,” was the last message Wilmer sent to his mother Magdalena Tepaz in their native Quiche on Monday. They had left home June 14.

Hours after hearing that audio message, a neighbor told the family there had been an accident in San Antonio and they feared the worst, Tepaz said through a translator.

The boys had grown up friends and did everything together: playing, going out, even planning to go to the United States despite not speaking Spanish well, said Melvin’s mother, María Sipac Coj.

A single mother of two, she said Melvin “wanted to study in the United States, then work and after build my house.” She received a voice message from her son Monday saying they were leaving. She has erased it because she couldn’t stand to listen to it anymore. 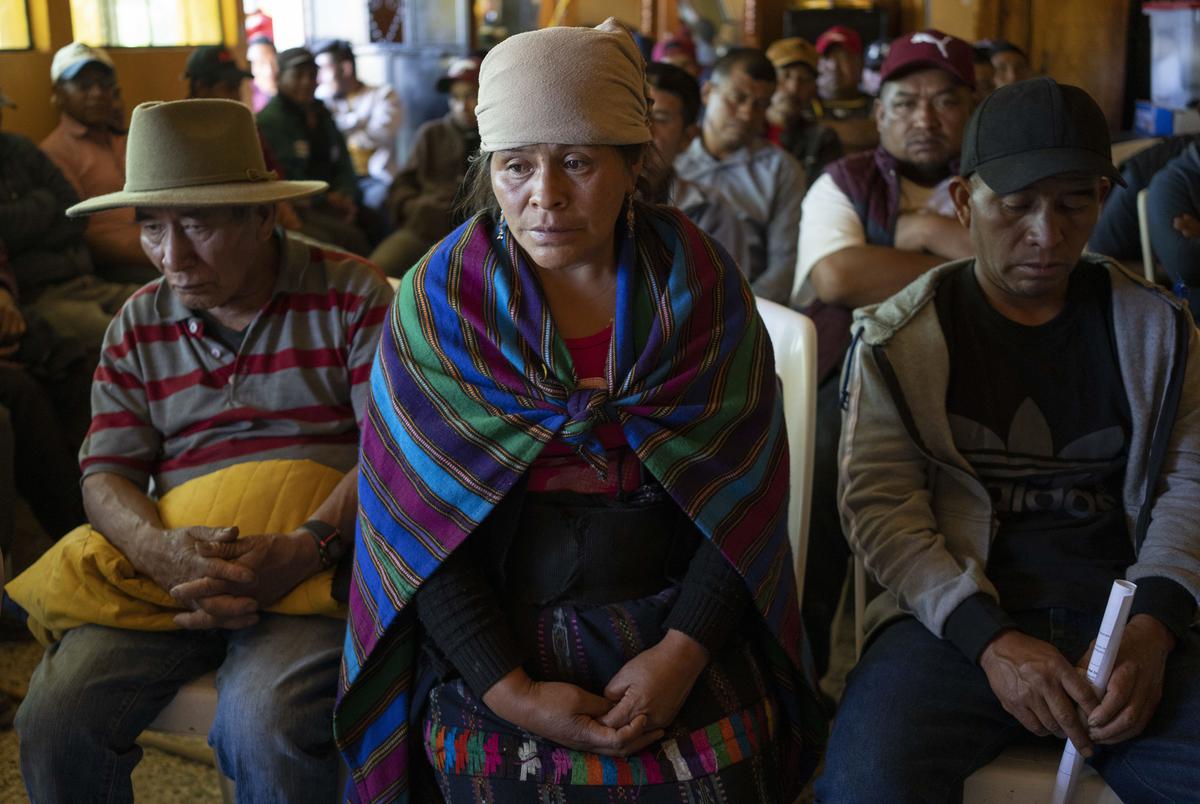 Magdalena Tepaz, center, and Manuel de Jesus Tulul, right, parents of Wilmer Tulul, wait for the start of a community meeting in Tzucubal, Guatemala, Wednesday, June 29, 2022. Wilmer and his cousin Pascual, both 13, were among the many dead discovered inside a tractor-trailer on the edge of San Antonio on Monday. Credit: AP Photo/Moises Castillo
Ad

Relatives who arranged and paid for the smuggler awaited the boys in Houston. Those relatives told her of their deaths, and the Guatemalan government confirmed them to her Wednesday.

Wilmer’s father, Manuel de Jesús Tulul, could not stop crying Wednesday. He said he had no idea how the boys would get to Houston, but never imagined they would be put in a trailer. His son had left school after elementary and joined his father clearing farmland for planting.

Tulul said Wilmer did not see a future for himself in a town where modest homes were built with remittances sent from the United States. He wanted to help support his three siblings and have his own house and land some day.

The smuggler charged $6,000, almost half of which they had paid. Now Tulul was only thinking about getting his son’s body back and hoping the government would cover the cost. 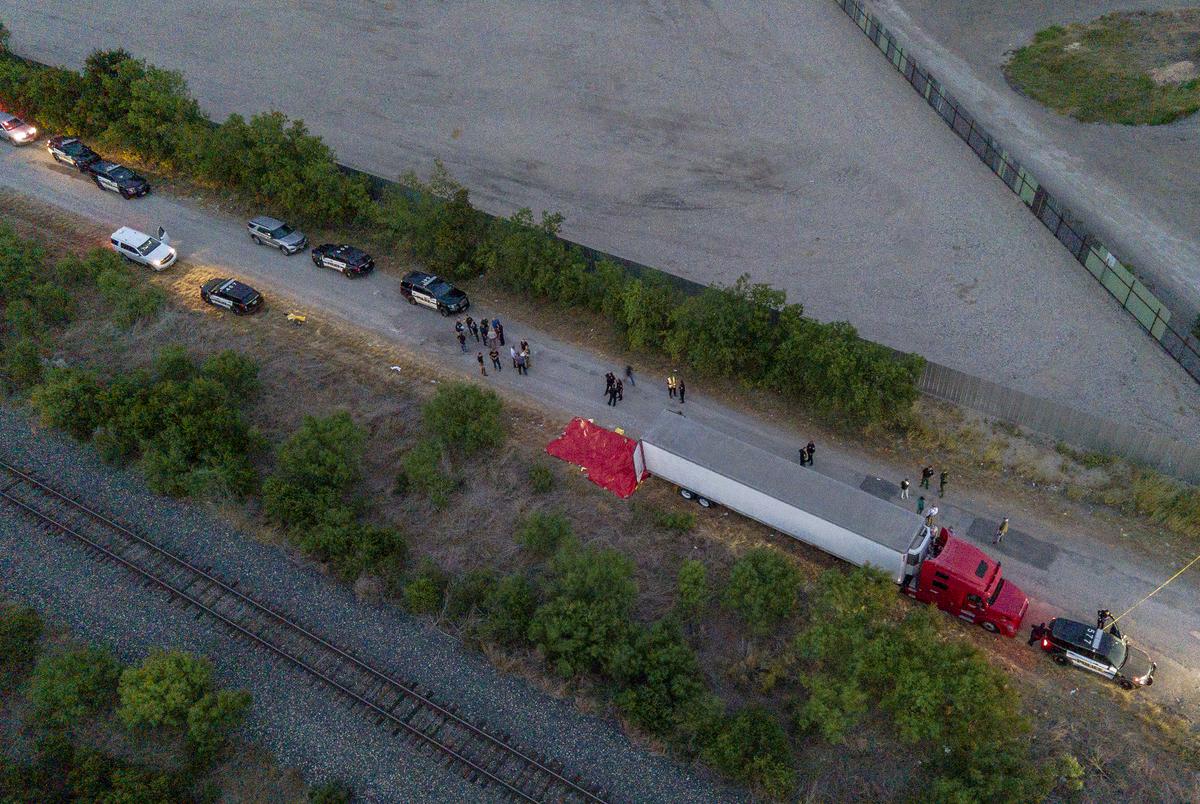 Law enforcement officers work at the scene where people were found dead inside a tractor trailer in San Antonio on June 27, 2022. Credit: Nick Wagner for The Texas Tribune
Ad

In Mexico, cousins Javier Flores López and Jose Luis Vásquez Guzmán left the tiny community of Cerro Verde in the southern state of Oaxaca also hoping to help their families. They were headed to Ohio, where construction jobs and other work awaited.

Flores López is now missing, his family said, while Vásquez Guzmán is hospitalized in San Antonio.

Cerro Verde is a community of about 60 people that has largely been abandoned by the young. Those who remain work earning meager livings weaving sun hats, mats, brooms and other items from palm leaves. Many live on as little as 30 pesos a day (less than $2).

It was not the first trip to the U.S.-Mexico border for Flores López, now in his mid-30s, who left Cerro Verde years ago and went to Ohio, where his father and a brother live.

He was back home to see his wife and three small children briefly, said a cousin, Francisco López Hernández. Vásquez Guzmán, 32, decided to go with his cousin for his first trip across the border and hoped to reach his oldest brother who is in Ohio as well.

While everyone knew the risks, countless people from Cerro Verde had made it safely across the U.S.-Mexico border with the help of smugglers, so it came as a shock, López Hernández said, to learn Vásquez Guzmán was among those packed into the trailer found abandoned Monday near auto salvage yards. The family believes Flores López was, too, but they are still awaiting confirmation.

Vásquez Guzmán’s mother had intended to get a visa to visit her hospitalized son, but on Wednesday he was moved out of intensive care and she was able to speak with him by phone. She decided to stay in Mexico and await his recovery, said Aida Ruiz, director of the Oaxaca Institute for Migrant Attention.

López Hernández said most people rely on those who have made it to the U.S. to send them money for the journey, which usually costs around $9,000.

“There are a lot of risks but for those who are lucky, the fortune is there, to be able to work, earn a living” he said.

Join us at The Texas Tribune Festival, happening Sept. 22-24 in downtown Austin, and hear from 300+ speakers shaping the future of Texas including Joe Straus, Jen Psaki, Joaquin Castro, Mayra Flores and many others. See all speakers announced to date and buy tickets.