Woman in critical condition after Southwest Side crash, SAPD says

EL PASO — A Texas judge wants to wait and see if the federal government will seek the death penalty against the alleged gunman in the 2019 racist massacre at a local Walmart before weighing a trial on state charges.

More than three years after 23 people were killed while shopping, state District Judge Sam Medrano said Tuesday that it’s more appropriate to wait until January, when the federal prosecution is expected to decide if it will seek to execute the accused attacker, before he makes decisions on how to proceed with Texas’ capital murder case. 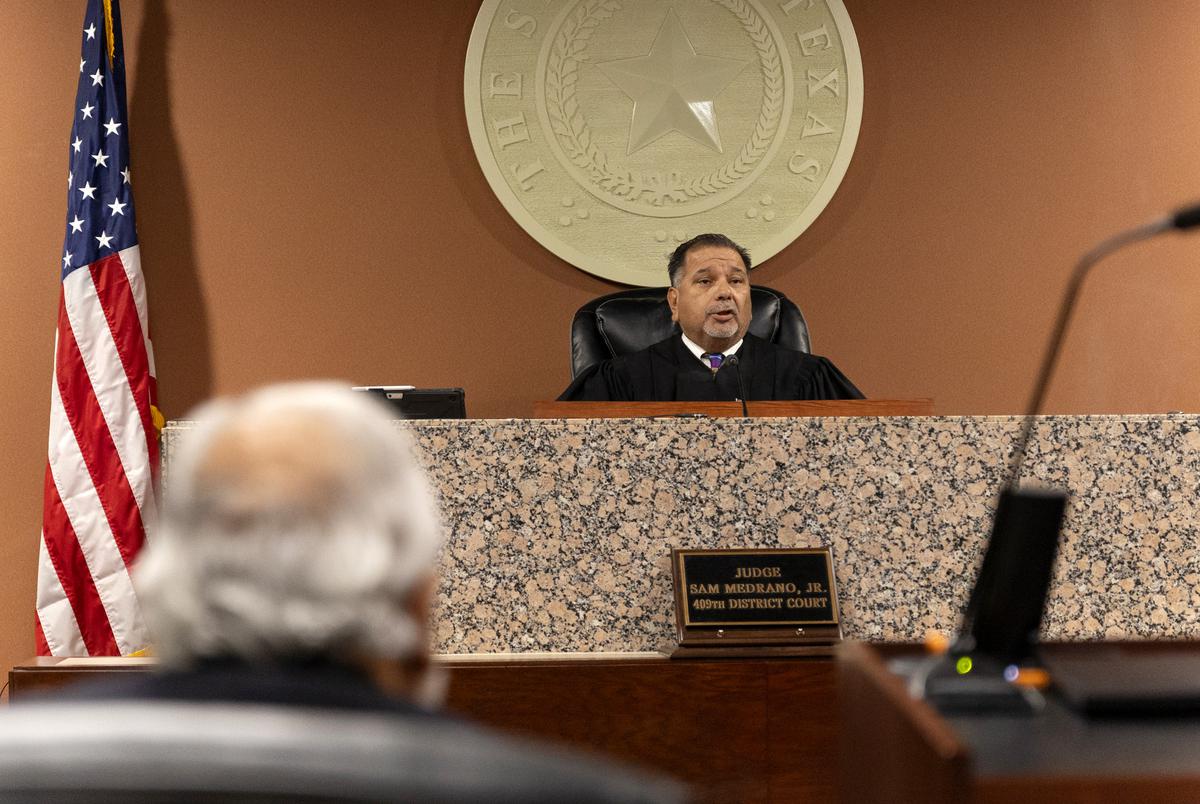 State District Judge Sam Medrano at a hearing Tuesday in El Paso on the 2019 racist massacre at a local Walmart. Credit: Jorge Salgado for The Texas Tribune

“Depending on the outcome of the federal government’s decision, we would be in a better position to determine whether or not scheduling orders, or a tentative trial or even a permanent trial date should be made on the state’s side,” Medrano said from the bench Tuesday at a status hearing on the state’s case against the alleged shooter.

Aside from being indicted on a Texas capital murder charge, in which state prosecutors have said they would seek death, Patrick Crusius is also charged with 90 federal crimes, 45 of them hate crimes. A federal judge has set a tentative trial date for those charges for January 2024.

The state’s case, on the other hand, has idled. But it has been filled with drama, which many in the legal community worry will weaken the high-profile death penalty case. Such cases by design have an extensive appeals process.

Medrano’s decision to wait was announced minutes after state prosecutors said they needed more time to respond to allegations filed in court last week that the El Paso district attorney’s office was involved in impersonating and intimidating relatives of victims of the Walmart shooting in an attempt to remove Medrano from the case.

Medrano and Yvonne Rosales, the elected district attorney, have sparred in court over what Medrano called “grandstanding” by Rosales and what the prosecutor deemed judicial bias against her, in part because she is a woman.

Since Rosales took office last year, she has spent much of her time pushing back against scandals and accusations of incompetence and misconduct, culminating in an ongoing court fight to remove her from office before her term expires in 2024.

Rosales has been at the helm as hundreds of criminal cases were thrown out by judges after her office failed to get charges filed within six months. And she watched a murder defendant be freed from jail because her office was found to have vindictively pushed for a death sentence after prosecutors were caught unprepared for trial.

In the Walmart prosecution, Medrano chastised her in a July court hearing after she told the media she hoped for a trial date next summer, before the federal trial, without indicating that prosecutors had made progress in the case.

Rosales later pushed back by unsuccessfully seeking to get Medrano thrown off the case, saying she had “never been treated with such bias or antagonism.”

Last week, a new report filed in the court claims a local judge working with Rosales was behind mysterious emails that condemned Medrano, claimed to have been written by the family of a Walmart shooting victim. The family later told a court-appointed attorney that Municipal Court Judge Roger Rodriguez, of the village of Vinton in El Paso County, “continually victimized” the family while saying he was acting on behalf of the prosecution, according to the report.

Audio transcripts of conversations the family recorded with Rodriguez reveal that the family said Rodriguez and his wife sent one of the emails from the phone of the victim’s relative without the family reading it first. Sworn affidavits filed with the report said the family member was threatened by Rodriguez. Rodriguez did not respond to multiple requests to discuss the allegations.

Rosales’ office countered the allegations in a filing Tuesday morning, claiming the family had previously requested assistance to file a complaint against Medrano’s behavior toward Rosales and wanted him off the case.

The court appointed an attorney to represent the family based on the emails’ possible violation of his gag order, issued in July after Rosales gave the media a hopeful trial date. The emails were expected to be the focus of Tuesday’s hearing, but just after midnight, the district attorney’s office filed a motion to halt proceedings on the issue.

Medrano gave the state 45 days to more fully respond to the possibly criminal allegations, which have also been sent to the FBI, according to the report.

Rosales did not appear at Tuesday’s status hearing, her office instead represented by Curtis Cox, one of her top assistant district attorneys who led the murder case that was dismissed for “prosecutorial vindictiveness.”

Disclosure: Walmart Stores Inc. has been a financial supporter of The Texas Tribune, a nonprofit, nonpartisan news organization that is funded in part by donations from members, foundations and corporate sponsors. Financial supporters play no role in the Tribune’s journalism. Find a complete list of them here.