5 warnings in effect for 3 counties in the area

The Weeknd cancels San Antonio show, entire tour because he wants ‘something bigger and special’

Dr. Bhavik Kumar said he normally performs between 20 to 30 abortions every day at the Planned Parenthood Center for Choice in Houston.

But on Wednesday, following the implementation in Texas of one of the country’s most restrictive abortion laws, Kumar saw only six patients. He had to deny abortions to half of them.

“One patient was very distraught and did not expect to be as far along as she was, and so the staff spent a good amount of time helping her think about other options and places out of state,” said Kumar, one of the named plaintiffs in the federal lawsuit seeking to overturn the new law. “When you're told your only option is to go to another state and travel and all the logistics involved with that, it's very distressing.”

Kumar said he treated a heavier load of patients than usual in the days leading up to the six-week abortion law going into effect. Senate Bill 8 prohibits abortions whenever an ultrasound can detect what lawmakers defined as a fetal “heartbeat,” which can be as early as six weeks into pregnancy.

Medical and legal experts say the term is misleading because embryos don’t possess a heart at that developmental stage.

But on Wednesday, when experts said around 85% of abortions that normally occur in Texas became illegal, Kumar finished treating patients early.

“It's a terrible day in Texas, and I'm worried about not only the women in Texas, but the ripples this will have around the country,” said Cecile Richards, a women's rights activist who served as president of the Planned Parenthood Federation of America between 2006 and 2018.

“It's an outrageously evil bill, a piece of legislation that not only now takes away a right that folks have had in this country for almost 50 years overnight, but also empowers others to turn them in and turn in doctors, turn in anyone who helps women,” she said of the law’s provision that allows private citizens to sue abortion providers and others.

At the Whole Woman’s Health clinic in Austin, the waiting room was empty by Wednesday afternoon, quiet except for the sound of the TV and the voices of staff in back rooms.

Only 12 patients showed up, and clinic doctors had to turn away at least three of them because cardiac activity was detected in the embryos.

One of the women started crying during her ultrasound when a “heartbeat” was identified, a clinic staffer said.

On Tuesday, staffers at the Whole Woman’s Health clinic in Fort Worth had worked up until the midnight deadline to see as many patients as possible. Staffers said many of the patients were shocked to learn that if their procedures had been scheduled one day later, they couldn’t have been performed.

The clinic saw more than 100 patients in the course of that day.

Wednesday morning, the clinic had 77 scheduled appointments, but staff had to turn away some of those patients because they did not qualify under the new restrictions, said Jackie Dilworth, director of marketing and communications at Whole Woman’s Health.

At Whole Woman’s Health clinics, staffers have been advised not to refer patients out of state, for fear that doing so might be seen as helping women find illegal abortions and thus violate SB 8. At Planned Parenthood, though, attorneys believe such actions do not violate the law.

All the clinic staffers at Whole Woman’s Health who spoke to The Texas Tribune asked their names not be used because they fear harassment and because of concerns about provisions of the new law that might get them sued. Staffers at other Texas clinics made the same request for the same reasons.

Pregnant Texans are finding abortion providers despite the law. According to information from clinics in Oklahoma and even Minnesota, Texas patients began seeking information or even showing up weeks before SB 8 went into effect. 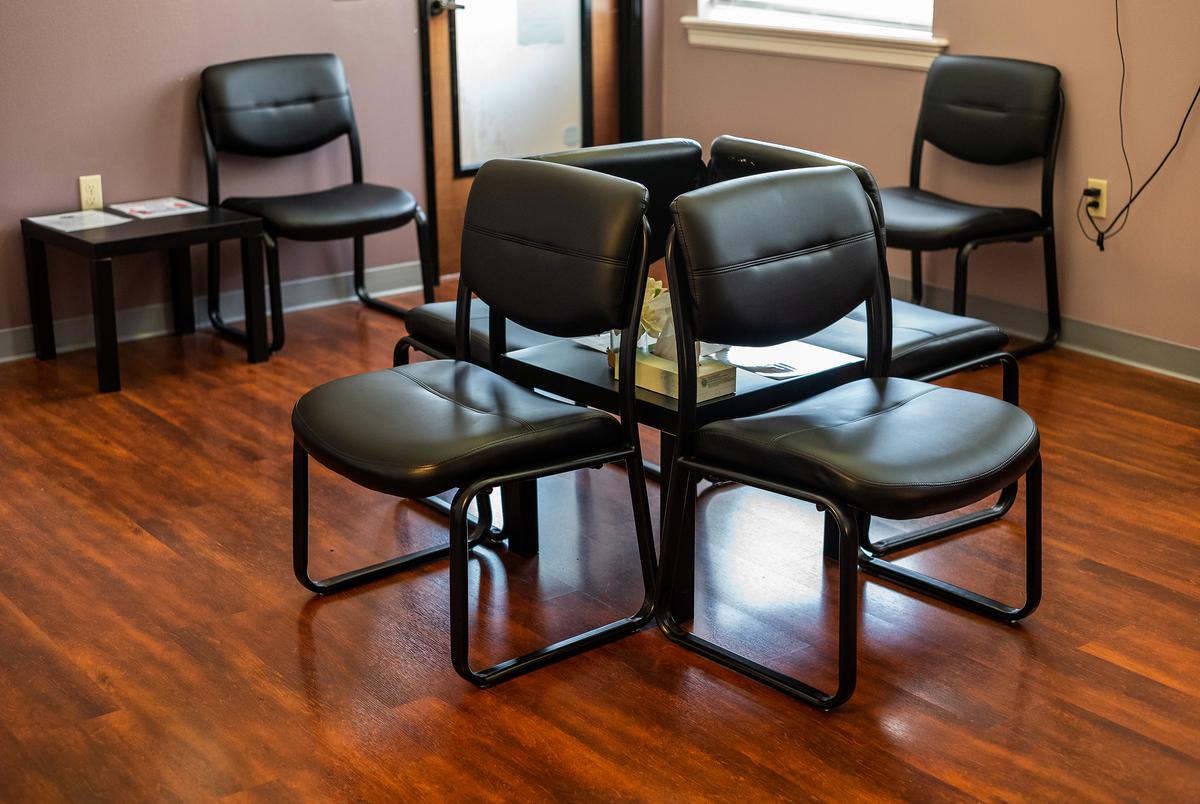 The waiting room at Whole Woman’s Health of Austin sits empty on Sept. 1, 2021. Credit: Jordan Vonderhaar for The Texas Tribune

Leaving the state to receive an abortion is beyond the resources of many people. As a result, some patients are already returning to methods that may not involve doctors. But this time, patients have more options than the desperate measures used in the past when medical abortions were illegal or unavailable.

“Self-managed abortion,” referring to the practice of patients seeking abortions outside of traditional health care settings, has already increased in Texas and may see a drastic rise, said Abigail Aiken, a professor at the Lyndon B. Johnson School of Public Affairs at the University of Texas at Austin.

“Self-management, as we historically thought about it, was very much this idea of a desperate last resort, a very unsafe measure, where you think about coat hangers or drinking household cleaning products,” Aiken said. “We've come a really long way since then. Now, when we talk about self-management — not to say those things couldn't ever happen — but we're more commonly talking about abortion pills … available from online telemedicine sites and online pharmacies.”

But Senate Bill 4, which was passed by the state Legislature and sent to Gov. Greg Abbott on Wednesday, would stop providers from prescribing medication abortions after seven weeks of pregnancy.

Texans from low-income or rural communities have already turned to self-managed abortions as access to Texas abortion clinics decreased over the years, Aiken said.

“It really needs to be a spectrum of care that meets people where they are and for some folks, the clinic is always going to be the place where they feel best cared for,” Aiken said. “In my ideal world, you would see all of these options, equally available and respected.”

Other Texans are taking different routes. One Texan, who asked her name be withheld because of fears about privacy, said she and her husband had decided that he would undergo a vasectomy to prevent any concerns about pregnancy.

“We were on the fence about wanting children, but we've decided to accelerate our decision, given the new law. If this law weren't in place, we would probably wait another five years and might have even changed our minds,” she said.

Kumar said he’s uncertain if federal courts will eventually block the law, but he worries that mortality rates for pregnant Texans will rise if it remains in place for too long.

Disclosure: Planned Parenthood and the University of Texas at Austin have been financial supporters of The Texas Tribune, a nonprofit, nonpartisan news organization that is funded in part by donations from members, foundations and corporate sponsors. Financial supporters play no role in the Tribune's journalism. Find a complete list of them here.