Latest updates: What we know about the deaths of 50 people found inside a trailer in San Antonio

Latest updates: What we know about the deaths of 50 people found inside a trailer in San Antonio

‘Quite a few of them are already deceased:’ Dispatch calls from EMS responders reveal new details about tractor-trailer tragedy

The prejudice no one is talking about: ageism at work

Democratic primary runoffs for congressional and state legislative seats in South Texas are putting on display clearly different directions for the party as it approaches a general election where Republicans are set on capturing new territory in the region.

In the 15th Congressional District, Ruben Ramirez and Michelle Vallejo are vying to be the Democratic nominee for an open seat that Republicans consider one of their top pickup opportunities nationwide. In Texas Senate District 27, Morgan LaMantia and Sara Stapleton-Barrera are competing for the Democratic nod to replace a retiring incumbent, Eddie Lucio Jr., who leaves behind a long legacy of bucking his fellow Democrats on social issues. And in House District 37, Ruben Cortez Jr. and Luis Villarreal are jockeying for the Democratic slot in a new battleground district that Republicans created for themselves in the redistricting process last year.

All the contests have grown contentious in recent weeks as candidates fight to show they are the best standard-bearer for Democrats going forward in a newly competitive region. Here is a look at the three runoffs: 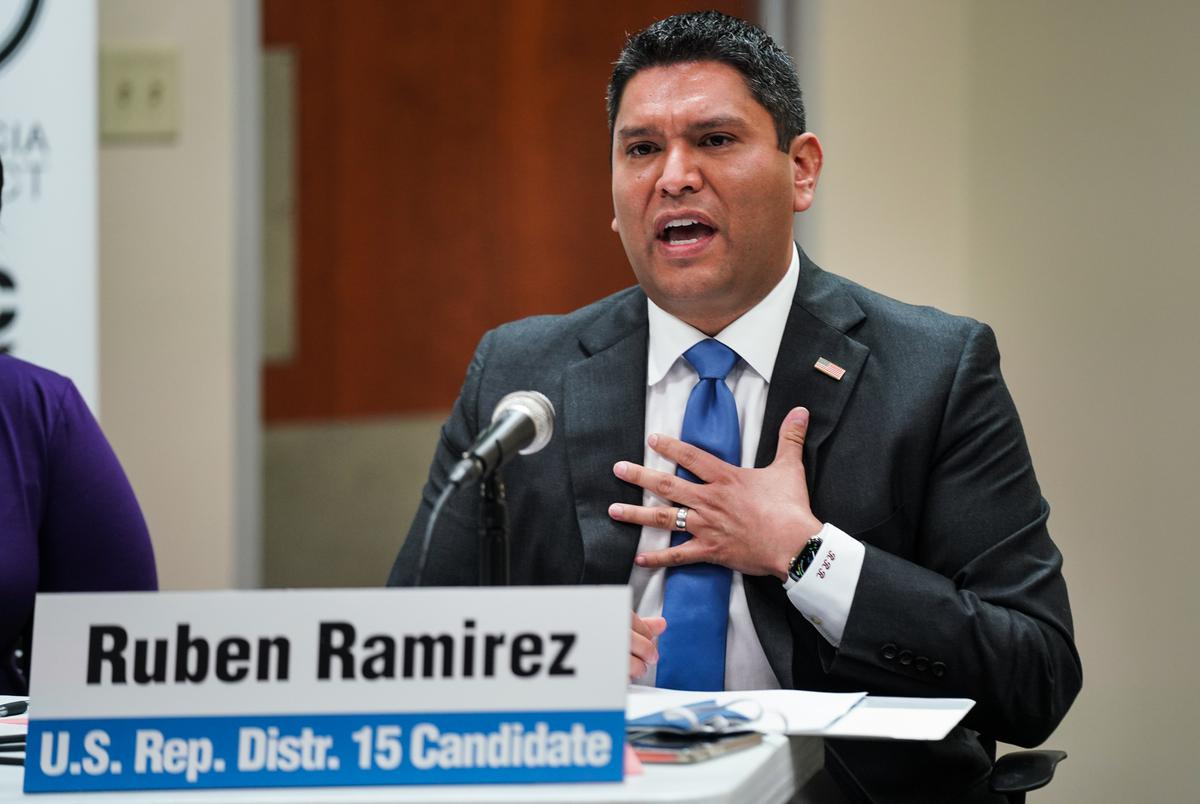 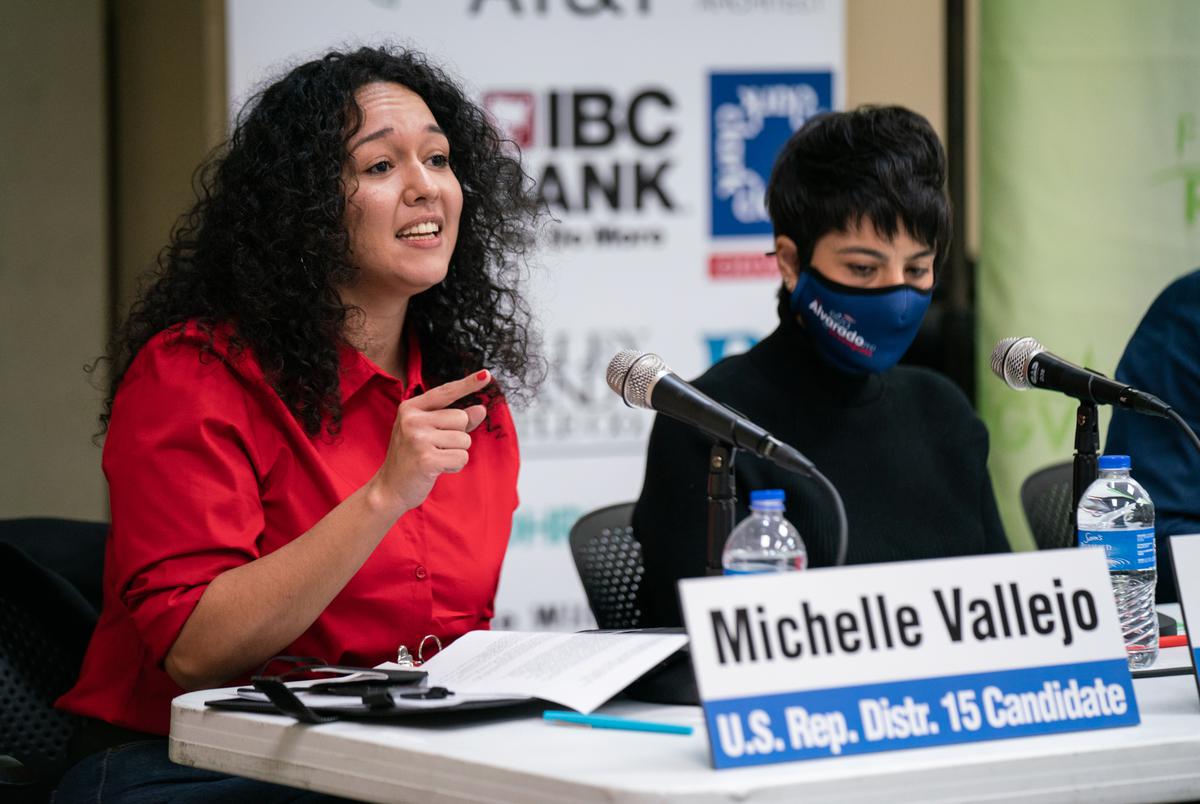 Ruben Ramirez, left, and Michelle Vallejo, candidates in the 15th Congressional District, responded to questions during a Futuro RGV candidate forum in McAllen in January. Credit: Verónica G. Cárdenas for The Texas Tribune

The 15th District arguably carries the highest stakes of all the Democratic primary runoffs in South Texas, given that Republicans see it as the most flippable. Already a district that Biden barely carried in 2020, redistricting tilted it a little more in the GOP’s favor, prompting the incumbent, Democratic U.S. Rep. Vicente Gonzalez of McAllen, to seek reelection in a more safe neighboring district.

The runoff candidates are Ruben Ramirez, a lawyer and Army veteran who previously ran for the seat, and Michelle Vallejo, an activist and small business owner. It’s a timeworn matchup between a moderate Democrat who believes the party will risk the seat in November if it goes too far to the left — and a progressive Democrat who sees it differently.

“More than just telling people things, I’ve been showing up,” Vallejo said in an interview, noting she has “been able to earn more endorsements than Ruben, both locally and nationally,” and posted better numbers on the latest campaign finance report.

“We haven’t just been talking the talk, we’ve been walking the walk,” she said.

Ramirez has continued to campaign hard on electability and distancing himself from the national Democratic brand, impressing upon audiences that he knows South Texas Democrats are different. With an eye on the general election, he regularly namedrops the GOP nominee, Monica De La Cruz, who has emerged as one of the Republicans’ most prized congressional candidates nationwide.

“There’s only one candidate that can win and beat Monica De La Cruz, and that’s me,” Ramirez said during a campaign stop earlier this month, noting he was the top vote-getter in the primary, earning 28% to 20% for Vallejo. In a statement for this story, he added, "We won the primary in March, we will win the runoff this month, and we will win in November to make sure that we have a common sense fighter for South Texas in Congress."

The Congressional Hispanic Caucus has been deeply divided on the runoff, with nearly a dozen members splitting their endorsements between Ramirez and Vallejo.

One of Ramirez’s most helpful endorsers lately has been Democratic Majority for Israel, a pro-Israel group that is spending mid-six-figures on positive TV ads and mailers for him. The biggest outside spender for Vallejo has been LUPE Votes, a local progressive organizing organization.

The two avoided open conflict for months, but Ramirez recently sent out a mailer criticizing Vallejo over one of their biggest policy differences: health care. Ramirez is focused on protecting the Affordable Care Act and expanding coverage, while Vallejo supports the far more sweeping single-payer system known as Medicare for All. The mailer says such a plan would “end the Affordable Care Act” and “eliminate private insurance,” among other things, which Vallejo’s campaign called “GOP talking points and lies” in a recent fundraising email.

“I will absolutely keep talking about” Medicare for All, including in the general election, Vallejo said, calling the proposal more important than ever with Roe v. Wade on the line.

There has also been tension lately around ethics in campaigning. A Ramirez supporter filed a campaign finance complaint last month against LUPE Votes accusing it of violating multiple laws for how it has supported Vallejo; LUPE Votes has not responded to the charges. On Friday, a national progressive group, the Working Families Party, said voters were getting texts claiming to be from the group and urging support for Ramirez, even though it backs Vallejo; Ramirez's campaign denied any involvement.

And an Edinburg campaign worker whose clients included Ramirez was recently indicted on a federal bribery charge unrelated to the race; Ramirez's campaign cut ties and said "corruption has no place in government."

Morgan LaMantia and Sara Stapleton-Barrera are running for the Democratic nod to replace a giant in South Texas politics: state Sen. Eddie Lucio Jr., the Brownsville Democrat who has represented the 27th District since 1991. And he looms prominently over the race given that he has endorsed LaMantia, and his socially conservative politics are not widely embraced inside the party these days.

But LaMantia has made clear she disagrees with him on some key issues — like his opposition to abortion rights — while looking to fend off a persistent progressive campaigner in Stapleton-Barrera, who ran against Lucio in the 2020 primary and forced him to a runoff. Despite LaMantia’s massive spending in the March primary — over $1.5 million — she and Stapleton-Barrera finished close together, getting 34% and 33%, respectively.

Now LaMantia has shaken up the runoff with a full-throated message criticizing both Gov. Greg Abbott and President Joe Biden on the border, vowing to stand up to both parties to fix immigration.

“To President Biden: The surge is here, there’s still no plan, and we on the border are paying the price,” LaMantia says in a TV ad, which is complemented by a mailer that tells Biden to “walk back your decision on [ending] Title 42,” the pandemic-era policy that border officials are using to quickly expel migrants at the border. One mailer shows a grainy, dark shot inside a migrant detention facility.

Stapleton-Barrera said Biden’s move to rescind Title 42 is the “right thing to do” and “an important step toward rebuilding the asylum system.” She accused LaMantia of using “national Republican rhetoric and trying to scare people here on the border.”

LaMantia defended the advertising in an interview, saying border communities are “fed up” with inaction by both parties on immigration reform. She said the frustrations are resonating even among the hardcore Democrats that can be expected to turn out for a primary runoff.

There is no shortage of contrasts, especially with Stapleton-Barrera’s old opponent — Lucio — in the mix. She said the district does not need “another one of [Lucio’s] mouthpieces,” and even if LaMantia is sounding different notes on abortion rights, “I don’t think that necessarily means she’s gonna be a champion or go up to bat on it.” LaMantia said Lucio remained an asset for her candidacy given all his experience and the void in seniority the next senator will have to fill.

More broadly, LaMantia pointed to her business experience — her family owns L&F Distributors, a beer wholesaler throughout South Texas — as her main difference with Stapleton-Barrera.

“Where she enjoys the soapbox, I enjoy the work,” LaMantia said.

Whether the GOP is serious about flipping this seat is the most open question among the Democratic primary runoffs in South Texas. But just like elsewhere, Republicans got a head start in SD-27, finalizing their nominee, Adam Hinojosa, back in the March primary. 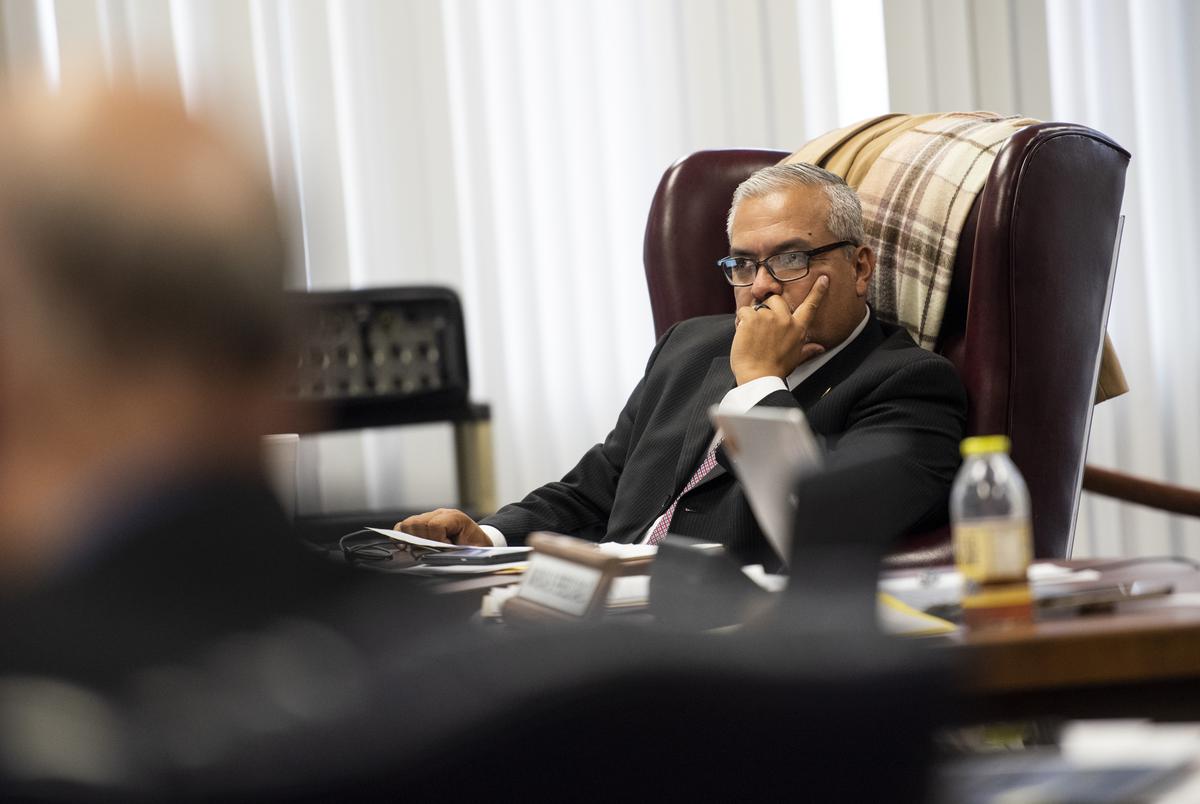 Ruben Cortez Jr. listened in on testimony during a 2019 State Board of Education meeting. Cortez is seeking the Democratic nomination for a Texas House seat. Credit: Eddie Gaspar

Much to the chagrin of Rio Grande Valley Democrats, Republicans divided up state House districts in the region during redistricting last year and came out with a newly competitive district based in Cameron County, including South Padre Island. President Joe Biden would have carried it by only 2 percentage points.

Republicans swiftly consolidated behind Janie Lopez, a San Benito school district trustee, and she easily won her primary in March. But the Democratic primary went to a runoff between two candidates who hail from distinctly different local factions: Luis Villarreal, a young former aide to state Sen. Eddie Lucio Jr., D-Brownsville; and Ruben Cortez Jr., a member of the State Board of Education who challenged Lucio in the 2020 primary.

Cortez is arguing Villarreal would be “more of the same,” a moderate like his former boss who is too cozy with Republicans. He has also highlighted that Villarreal recently worked as an executive for a staffing company that partnered with a troubled nonprofit to open a shelter for unaccompanied migrant children in the Valley.

“This young man is poised to become the next Ryan Guillen,” Cortez said, referring to the longtime South Texas state representative who switched parties and joined the GOP last year. “He is not gonna fight for this battleground district every two years. … He will fold to the Republican Party.”

Cortez has seized on two donations that Villarreal made to Republicans toward the end of the 2020 election — $5,000 to the state Republican Party and $2,800 to U.S. Sen. John Cornyn — asking if Villarreal is running in the right primary. Villarreal has not shied away from the contributions as he has characterized them as indicative of the kind of bipartisan cooperation needed in the state Senate.

Asked at a recent forum if it is OK for Democratic candidates to have previously donated to Republicans, Villarreal answered in the affirmative, saying it “shows character in a way that you’re willing to work with both sides.”

“We’re here locally, and we need to ensure that you’re able to get what you need done,” Villarreal said, “and sometimes that means working with the other side, as I will when I become a legislator.”

Cortez has faced his own attacks from charter-school advocates, who he has battled on the State Board of Education. One pro-charter school PAC, Charter Schools Now, is running an ad against Cortez that hits him as an “unethical” politician “out for himself.” Villarreal has piled on, writing on Facebook on Friday that Cortez “has spent the last 18 years milking the government’s cow.”

Disclosure: Facebook has been a financial supporter of The Texas Tribune, a nonprofit, nonpartisan news organization that is funded in part by donations from members, foundations and corporate sponsors. Financial supporters play no role in the Tribune's journalism. Find a complete list of them here.