SAPD: Woman shot in attempted robbery at SE Side park

“A pivotal day”: Texas abortion law’s Supreme Court hearings spur hope for some, fear for others

WASHINGTON — The dividing line in front of the U.S. Supreme Court was both invisible and unmissable.

It extended from the big wooden door peeking through marble columns, down its famous steps and all the way to First Street. On the left side, groups of people, angry and scared, protested Texas’ new law with a message that “abortion is health care.” On the right side of the invisible line, abortion opponents chanted, prayed and proclaimed that abortion is “violence.” 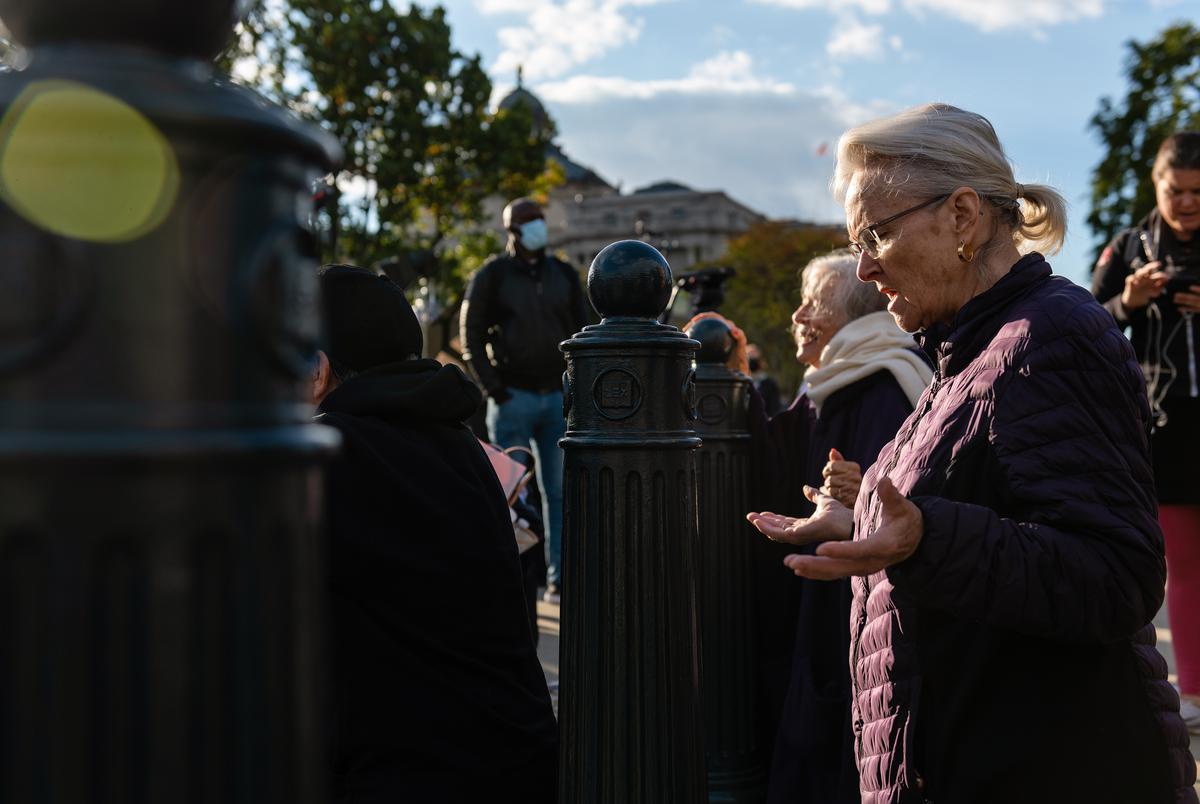 An abortion opponent prayed outside the Supreme Court in Washington, D.C., on Monday, when the high court heard cases regarding abortion in Texas. Credit: Eric Lee for The Texas Tribune
Ad

Inside the court, the nine justices heard arguments for and against Texas’ new abortion restrictions that went into effect in September. They interrogated Texas attorneys and the plaintiffs attempting to throw out the law. Key conservative justices pushed back on the enforcement mechanism of the law that encourages private citizens to sue those who perform or assist someone in getting an abortion, giving some of the abortion rights supporters hope.

“Today is a huge day, it’s a pivotal day,” said Chelsey Youman, an Austin-based activist against abortion. “I worked on this bill.”

As is often the case, Texas was at the center of American politics Monday morning. This time, though, the same state that served as the setting for the landmark Roe v. Wade ruling 50 years ago is at the center of the fight to repeal abortion rights.

There were a smattering of skirmishes across the line. Some stray members from each crowd ventured to the other side to make their case. But even as those discussions occasionally escalated, the protesters on both sides were seasoned enough in fights over abortion to know how little persuasion would be happening outside of the high court’s chambers.

Instead, the debate that actually mattered — the one inside the building — boomed over loudspeakers, adding to the cacophony.

On the side of the reproductive rights proponents, a robust crowd cheered and held a vigil. Melancholy women dressed in the red robes from “A Handmaid’s Tale” made the rounds.

“I’m here today because I had an abortion and had to put up with Texas’ restrictions on abortion access even back then and now it’s even worse,” said San Antonio resident M.J. Flores.

Flores said she has felt heavy for the abortion providers and administrative staffers in Texas. She said she’s been thinking about a mentor who counseled her as she considered her own abortion and a loved one who drove her to the clinic. 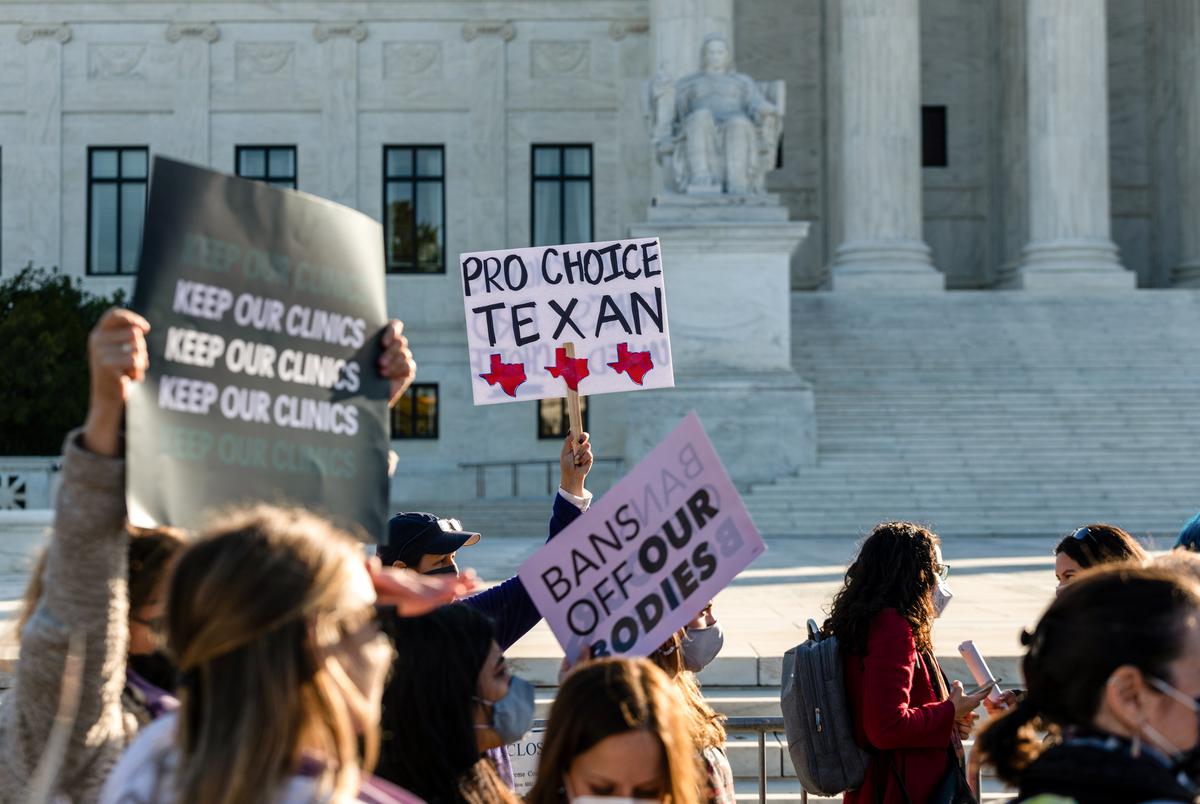 A Texan holds a sign reading, “Pro choice Texan” outside the Supreme Court on Monday. Credit: Eric Lee for The Texas Tribune

“I think about how all of them would have been sued for $10,000,” she said, referring to the $10,000 award stated in the law for plaintiffs who sue clinics or people illegally trying to get abortions and win. “I probably would have told no one and would have felt even more isolated.”

Kenya Martin, originally from Houston, traveled from nearby Virginia for the event and agreed with Flores.

“They should trust people to make decisions for themselves, and this whole idea of forced parenting is scary to me,” Martin said. “I just [wish] the politicians would listen to the people who know best, and that is the people who have abortions and yeah, I’m hoping they decide what’s right and they do what’s right for us because we need access to abortions.”

On the other side, abortion opponents sang, glad-handed, chanted and milled about. While there was an occasional “Former Fetus” T-shirt, much of their language and hashtags were couched in diction often deployed by progressives or that dominates youth culture. 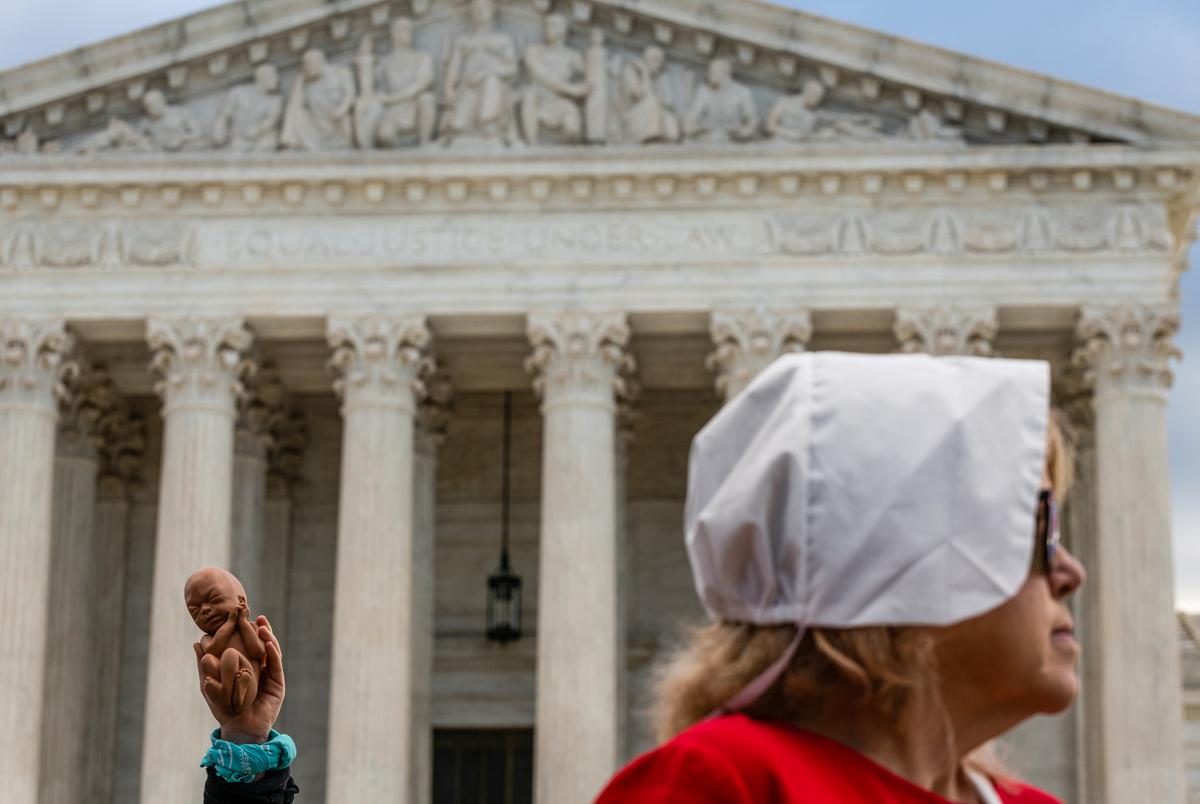 A member of the Progressive Anti-Abortion Uprising holds a prop fetus outside the Supreme Court. Credit: Eric Lee for The Texas Tribune

Signs encouraged attendees to “choose love, choose life.” One homemade sign stated, “Violence against another human can never be a human right.”

A mournful piano played over the audio system while a woman sang a solo, and a man wearing heart-shaped glasses carried around a plastic fetus.

At one point, a younger woman took to a bullhorn to deliver a generational ad hominem attack to an abortion rights advocate who crossed the line.

And there were dozens of young women expressing their advocacy against abortion in feminist vernacular.

“It’s a difficult issue, but I think at the end of the day, we all love women,” Youman said. “We all want to see women have freedom and to be empowered, and the way to that looks a lot different.”

“The answer can never be ‘kill the child,’” she added. “It’s to support the woman, stabilize her circumstances and help her be independent and empower her.”

State Sen. Bryan Hughes, the Mineola Republican, wore his state senate pin and was a bit of a celebrity among those who oppose abortion. It is his bill before the court, and he is an attorney named in the lawsuit.

“Yes, Roe v. Wade began in Texas,” Hughes said. “It would be appropriate for it to end in Texas.” 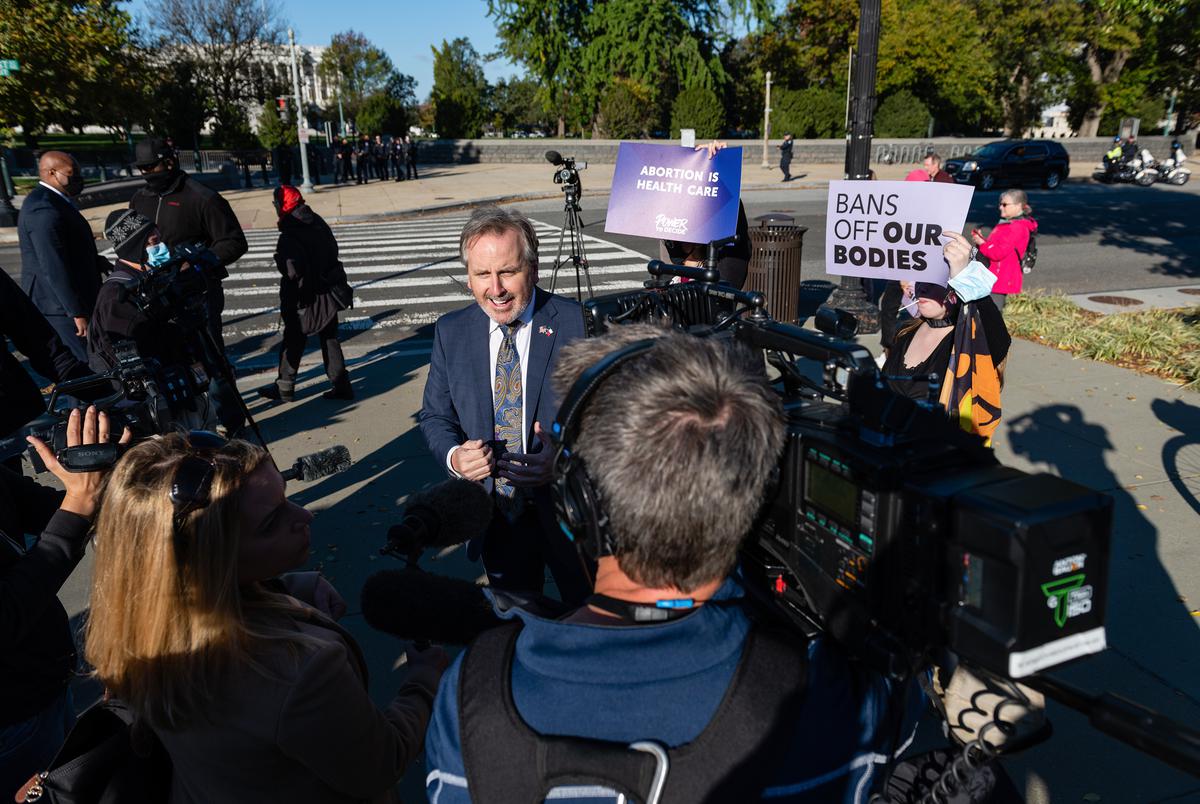 There was also overt hostility toward Texas from people outside the Supreme Court. One woman backing abortion rights encouraged a Texas reporter to leave the premises and return to the state.

Another woman, Karin Schall, wore a spray-painted, stenciled “Fuck Texas” on her shirt. When pressed, the New Yorker confessed to a deep affection for the state.

“I know, I know, it should say ‘politicians,’” she said, indicating her shirt should have clarified that the sentiment was only directed at the policymakers.

“There are so many things I love about your state,” she said. “San Antonio’s beautiful. … But I do love Austin.

“Hopefully, all of you can vote out people who are doing these things that make the rest of the country angry at one particular state,” she added. “You deserve a better governor. You deserve better representation.”

But Schall said she also was worried that Texas’ example could hurt the rest of the country. She pointed to a chalk inscription she wrote on the sidewalk.