ABILENE — Mark Lee Dickson bounded on stage at FountainGate Fellowship in this West Texas town Sunday as the worship band wrapped up their first song.

“We had a very important day on Friday,” Dickson said to the rapt crowd, referring to the U.S. Supreme Court ruling on Texas’ ban on abortions after about six weeks of pregnancy. He let the suspense hang for a moment.

“But I’m here to tell you — the Texas Heartbeat Act is still in effect.”

The congregation exploded into cheers and applause as Dickson grinned.

“Let’s praise God for that,” he said. 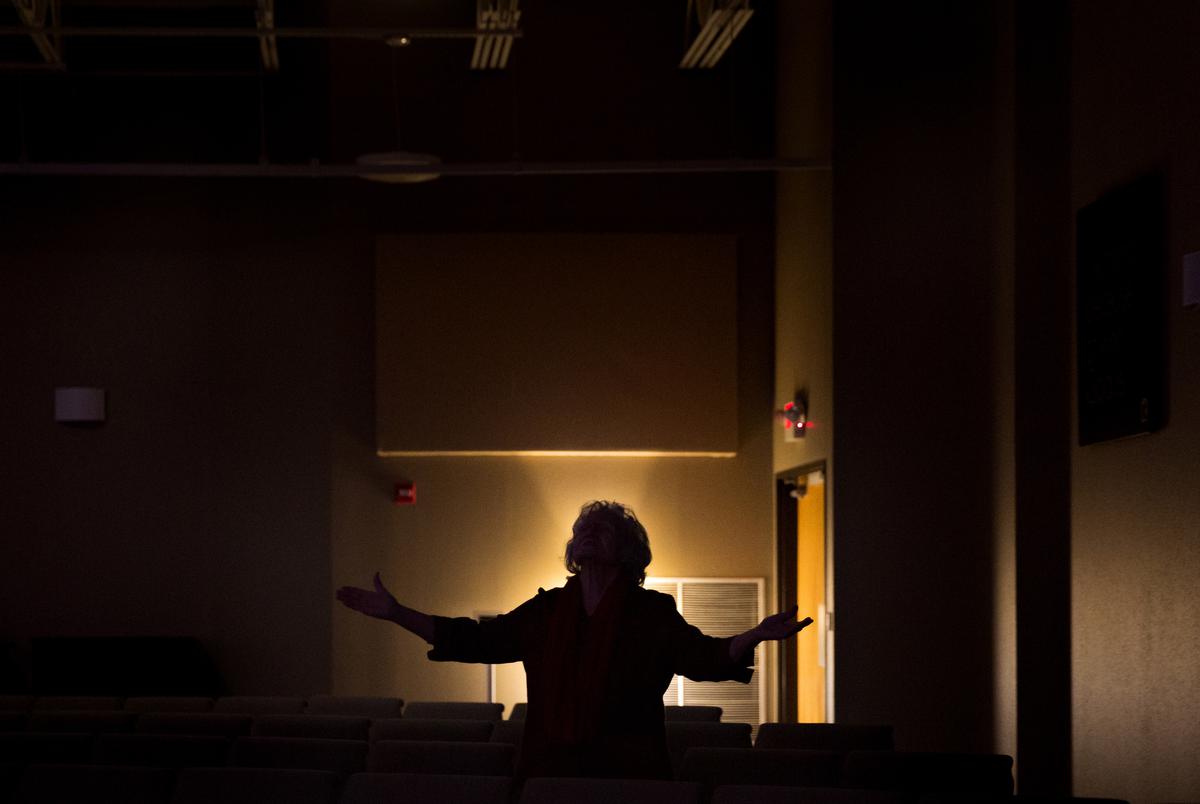 An attendee of a worship service at FountainGate Fellowship church in Abilene holds her arms up in praise on Dec. 12, 2021. Credit: Shelby Tauber for The Texas Tribune 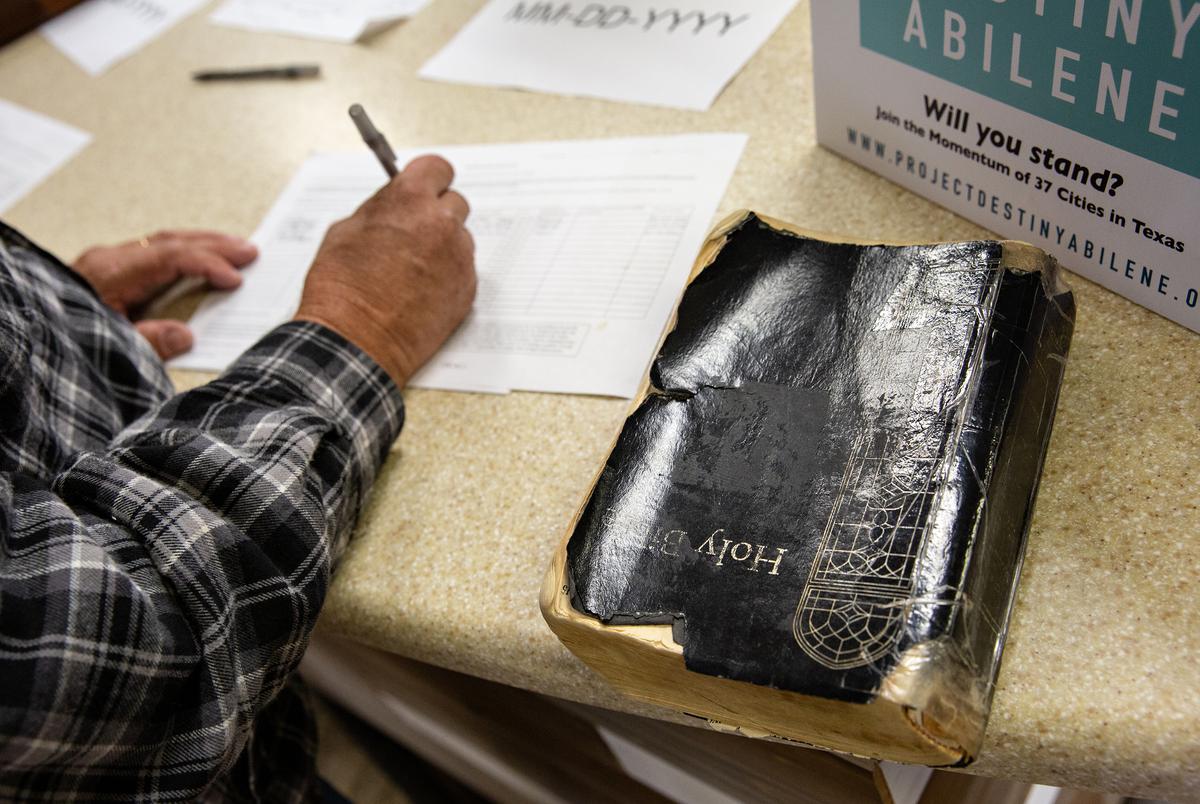 An attendee of New Hope Church in Abilene places his bible down as he signs the Project Destiny Abilene petition to add the abortion ban ordinance on the ballot in the next election, on Dec. 12, 2021. 7,500 signatures are needed in order for the ordinance to be put forward on the Abilene City Council’s agenda for a vote. Credit: Shelby Tauber for the Texas Tribune

Across the auditorium, arms went up and eyes closed, dozens of people offering their gratitude that abortions would continue to be largely inaccessible in the second largest state in the country.

This long-awaited moment for abortion opponents is due in large part to Dickson, an early advocate for the law’s unique enforcement mechanism, which deputizes private citizens to sue anyone who “aids or abets” in an abortion after an embryo’s cardiac activity is detected, usually around six weeks of pregnancy.

Abortion providers challenged the law, arguing it violates the constitutional protections for abortion enshrined in Roe v. Wade and subsequent rulings. On Friday, the Supreme Court allowed some of those challenges to proceed — but also left the law in place.

While the high court didn’t explicitly uphold the enforcement provision, a majority of justices declined to block it while the case returns to a lower court to be reargued. That decision shocked abortion providers and splintered the justices, who seemed caught in what Justice Elana Kagan called the “procedural morass” of the private enforcement mechanism, which is designed to evade judicial review.

The justices all agreed, however, to dismiss a challenge against the lone private individual named on the suit: Mark Lee Dickson.

On stage at FountainGate, Dickson threw his arms wide and grinned.

“It’s not every day that all nine justices agree with Mark Lee Dickson,” he said.

The crowd cheered and clapped. As the lights went down and the worship music swelled, Dickson slipped out the back, heading to another church across town. His work — and his victory lap — wasn’t done yet.

Dickson, who lives in the Longview area, has been involved in anti-abortion activism since he was a kid, protesting at clinics and leading Right to Life of East Texas. But it was another Supreme Court case, in 2019, that really mobilized him.

But while that case was proceeding through the justice system, Dickson started to get worried. One of Louisiana’s last remaining abortion clinics was just over the border from Texas, in Shreveport.

Dickson reached out to the mayor of Waskom, Texas, concerned that the clinic might cross the border. This “chatter,” as he called it, stemmed mostly from a newspaper article from the early 1990s that, he says, indicated the clinic had previously considered moving into Waskom to evade Louisiana’s abortion restrictions.

“Waskom did not want to be the mecca for abortions in that area,” he said. “These clinics draw from hundreds of miles. That’s not what they wanted to be known for in Waskom.”

Dickson got the mayor and city council on board to pass an ordinance banning abortion within city limits. He was worried about legal challenges, though, so state Sen. Bryan Hughes, R-Mineola, connected him with Jonathan Mitchell, the former solicitor general of Texas.

That’s when Mitchell proposed adding a private enforcement mechanism, empowering individual citizens to bring civil lawsuits against violators of the law. This unique workaround makes it very hard to challenge the law on the grounds that the city is violating the constitutional protection for abortion.

At first, it was just small towns that passed these ordinances. None of them even had abortion providers within city limits. These so-called “sanctuary cities for the unborn” faced legal challenges but were largely allowed to keep the ordinances on the books. 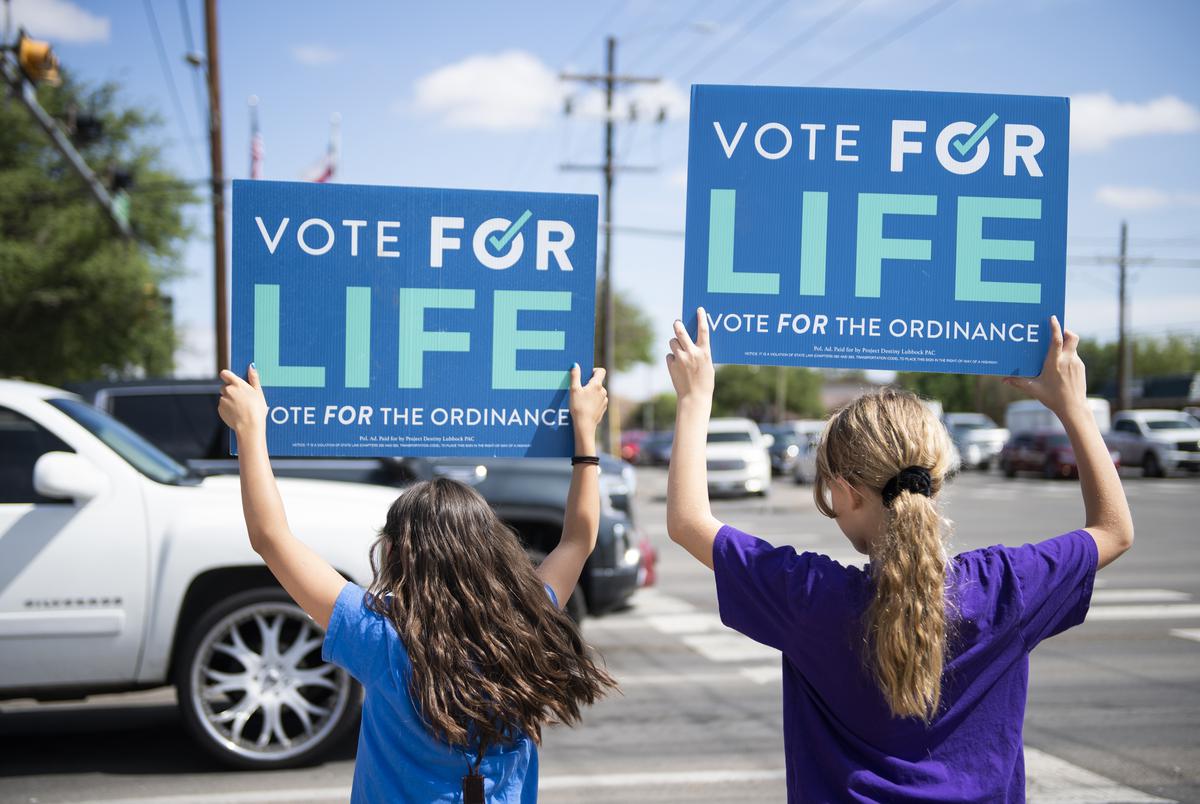 Kids hold signs supporting Proposition A, a local ordinatnce which would ban abortions in the city of Lubbock on Saturday, May 1, 2021. Credit: Justin Rex for The Texas Tribune 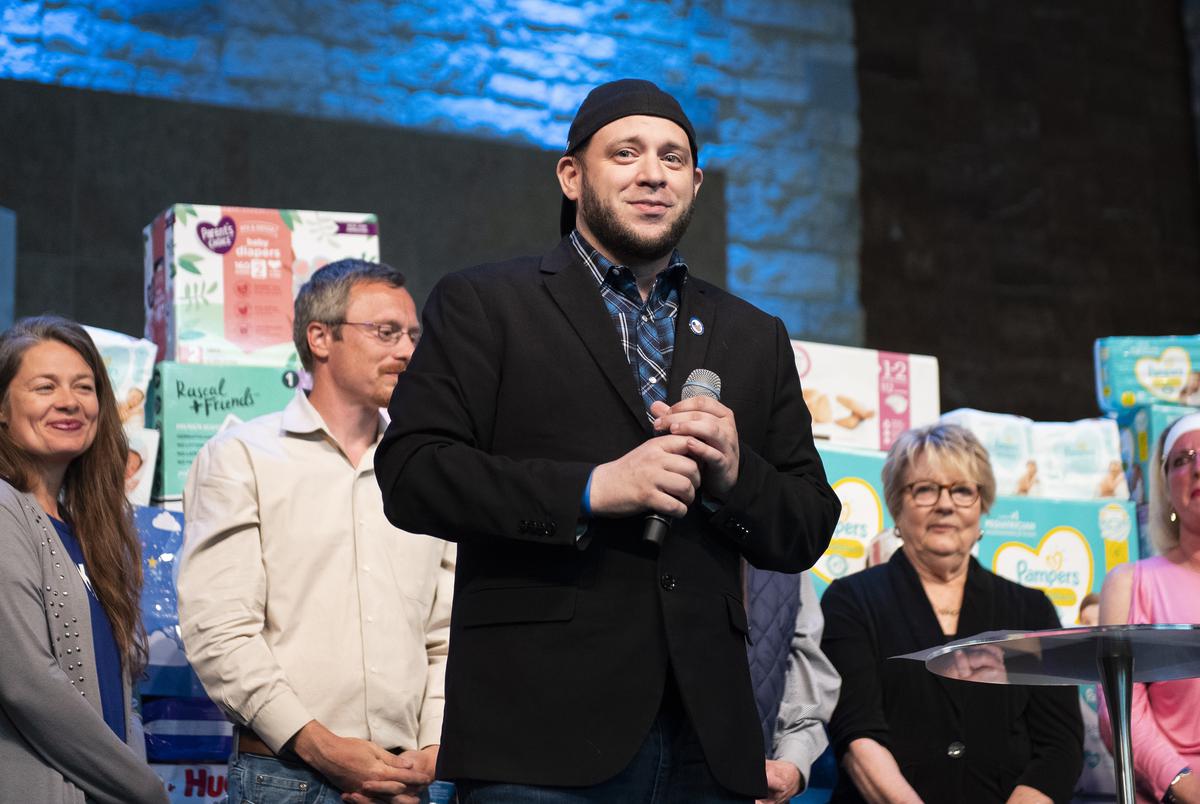 Mark Lee Dickson speaks during a Proposition A watch party at the Trinity Church in Lubbock on Saturday, May 1, 2021. Credit: Justin Rex for The Texas Tribune

First: In May, children in Lubbock held signs supporting Proposition A, a local ordinance which would ban abortions in the city. Last: Mark Lee Dickson spoke during a Proposition A watch party at Trinity Church in Lubbock on May 1. Credit: Justin Rex for The Texas Tribune

But in May 2021, less than a year after a Planned Parenthood opened in Lubbock, the city of 250,000 voted to make abortion illegal within city limits. After a judge threw out Planned Parenthood’s lawsuit challenging the ordinance, the clinic stopped providing abortions.

That same month, Gov. Greg Abbott signed Senate Bill 8 into law, empowering anyone to bring a lawsuit against anyone who “aids or abets” in an abortion in Texas after cardiac activity is detected. That’s typically around six weeks of pregnancy, a point at which many patients don’t yet know they’re pregnant. The bill is called the “Texas Heartbeat Act,” even though medical experts say that name is misleading because the activity measured on an ultrasound in early gestation is electrical impulses, not a true heartbeat.

The law has no exception for rape or incest and allows anyone, whether or not they even know the pregnant patient, to bring a suit. The state law was decried across the country as unconstitutional, exploiting a legal loophole that many believed would soon be closed by the courts. But Dickson wasn’t worried.

“Having seen the success, that it worked in cities, and that cities had survived challenges, it gave me greater confidence that the state’s heartbeat law would survive legal challenges as well,” said Dickson. “And that’s what we’ve seen.”

Since the Supreme Court ruled on Roe v. Wade in 1973, it’s been unconstitutional to institute bans on abortion before viability — the point at which a fetus is likely to survive outside the womb, usually around 24 weeks.

And yet, since Sept. 1, Texas has managed to ban abortions after about six weeks of pregnancy. A study from UT Austin showed abortions plummeted by half in the first month after the law went into effect, but providers say the drop is far greater — they’re serving a small fraction of their previous caseloads.

The U.S. Supreme Court declined to block the law before it went into effect, but called for an expedited hearing on Nov. 1. The question before the court was largely procedural: If the government isn’t enforcing the law, who can providers bring a legal challenge against?

Lawyers for the providers argued that there were several possible avenues: the judges who hear the cases, the court clerks who docket them, state licensing agencies, the Texas attorney general and even Mark Lee Dickson himself.

In a long-awaited ruling Friday, the court threw out most of those challenges, including the one against Dickson, but allowed a narrow challenge to continue. The court declined to grant an injunction to block the law and returned it down to a lower court to be argued again.

In a separate case, a state judge ruled Thursday that the law violated the Texas constitution but also didn’t stop it from being enforced.

Friday’s ruling was initially hailed as a victory by abortion providers, but within a few hours, the tone had shifted.

“It was our hope this morning that we could tell our hotline callers that this law was not going to prevent them from getting the care they need, that the court affirms that our reproductive decisions are worthy of respect, compassion and care,” said Amanda Williams, the executive director of the Lilith Fund. “But that's simply not what this ruling means.”

Amy Hagstrom Miller, the president and CEO of Whole Woman’s Health, which runs four abortion clinics in Texas, said on a press call that they would not be able to remain open indefinitely if these restrictions remained in place.

“Today’s decision is not OK,” she said. “It is unjust, cruel and inhumane.”

When Dickson heard that the Supreme Court had dismissed the challenges against him and allowed the law to remain in effect, he was happy. He was also very sleepy.

He’d driven 15 hours overnight from Nebraska, he said, where he is working with towns to pass similar ordinances banning abortions in city limits. He went back to sleep after he got the news, and when he woke up, he hit the road again, this time to San Angelo and Abilene, his latest targets in Texas.

“So it’s business as usual,” he said. “There’s still work to be done. But it is encouraging to see good laws survive.”

This was his message on Sunday morning as he visited churches in Abilene. He’s working with churches across the city to collect enough signatures to get the abortion ban ordinance on the city council’s agenda. If the city doesn’t pass it directly, Dickson said they’re prepared to get a referendum on the ballot during the next election.

At New Hope Church in Abilene, he stood on the stage, flanked by Christmas trees.

“There’s coming a day here in Abilene that we’re going to see Abilene become a sanctuary city for the unborn,” he said. “There are going to be a lot of unborn children leaping in their mothers’ wombs at that decision.” 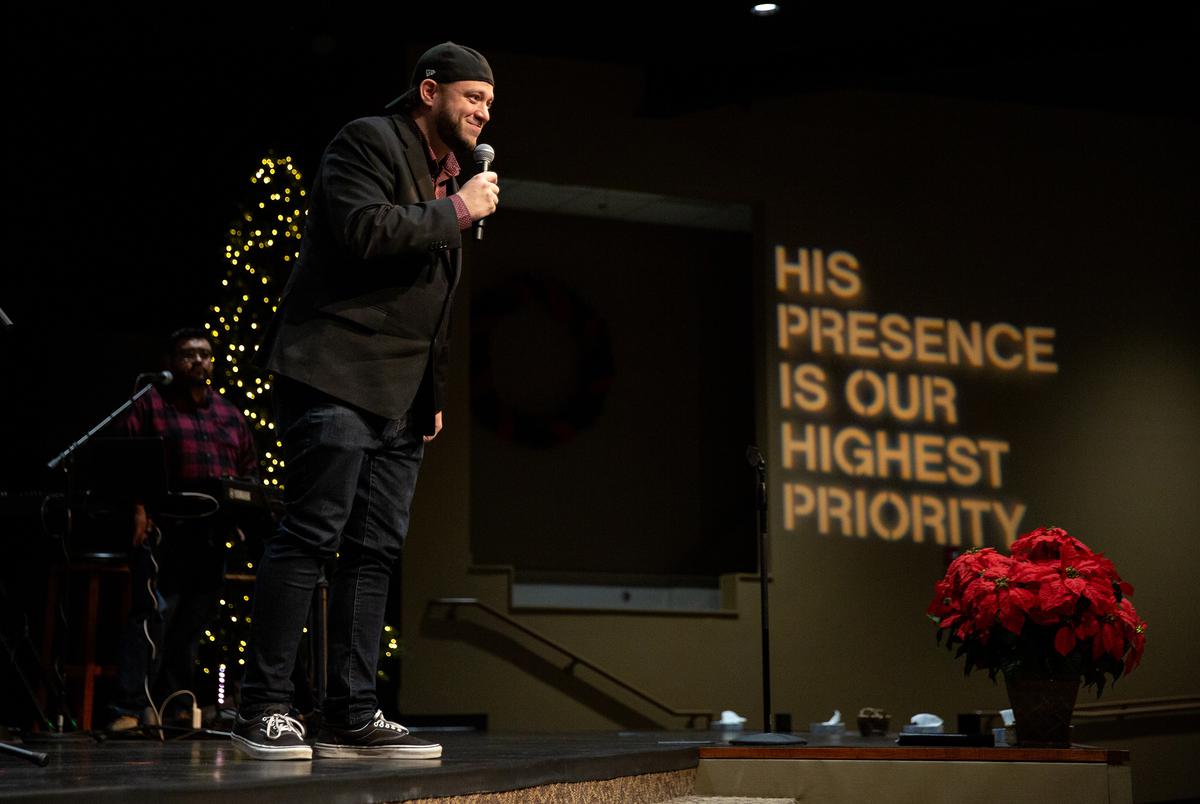 Mark Lee Dickson speaks to the congregation during a worship service at New Hope Church in Abilene on Dec. 12, 2021. Credit: Shelby Tauber for the Texas Tribune
Ad

He explained that Friday’s Supreme Court ruling, though procedural, was an important step in reassuring city leadership, in Abilene and across the country, that these sorts of laws hold up in court.

“If you’re pregnant right now and you felt a little kick on Friday, that might have been because of the great news we heard from the Supreme Court of the United States,” he said, the crowd cheering him on.

In an interview afterward, he said he saw the ruling as a green light to take this sort of ordinances across the country.

“Wherever we go, whether that be in Texas or Nebraska or Ohio or Kentucky or Florida … we can go anywhere now and say, look, this enforcement mechanism has survived before the Supreme Court of the United States,” he said. “It’s been tested, and it stands.”

Disclosure: Planned Parenthood has been a financial supporter of The Texas Tribune, a nonprofit, nonpartisan news organization that is funded in part by donations from members, foundations and corporate sponsors. Financial supporters play no role in the Tribune's journalism. Find a complete list of them here.