Texas lawmakers heard from dozens of Texans on Wednesday who pleaded with them to fix the state’s environmental agency, which they said is failing to reduce pollution in their neighborhoods.

At a hearing on a report evaluating the Texas Commission on Environmental Quality’s effectiveness, Texans as young as 9 and as old as 80 testified that the agency had not adequately responded to their environmental or health concerns.

From Hill Country river pollution to concrete batch plants in Houston to smog in urban areas, residents from across the state spent hours telling lawmakers about environmental problems in their communities and complaining that the agency isn’t doing its job regulating the industry.

“We’ve been taught that pollution is not good for our health and growing brains, so I wonder why TCEQ keeps permitting plants that pollute our air and water,” said Natalie Diamond, 9, of Gunter, who testified after her mother, who advocates for clean air in their community. 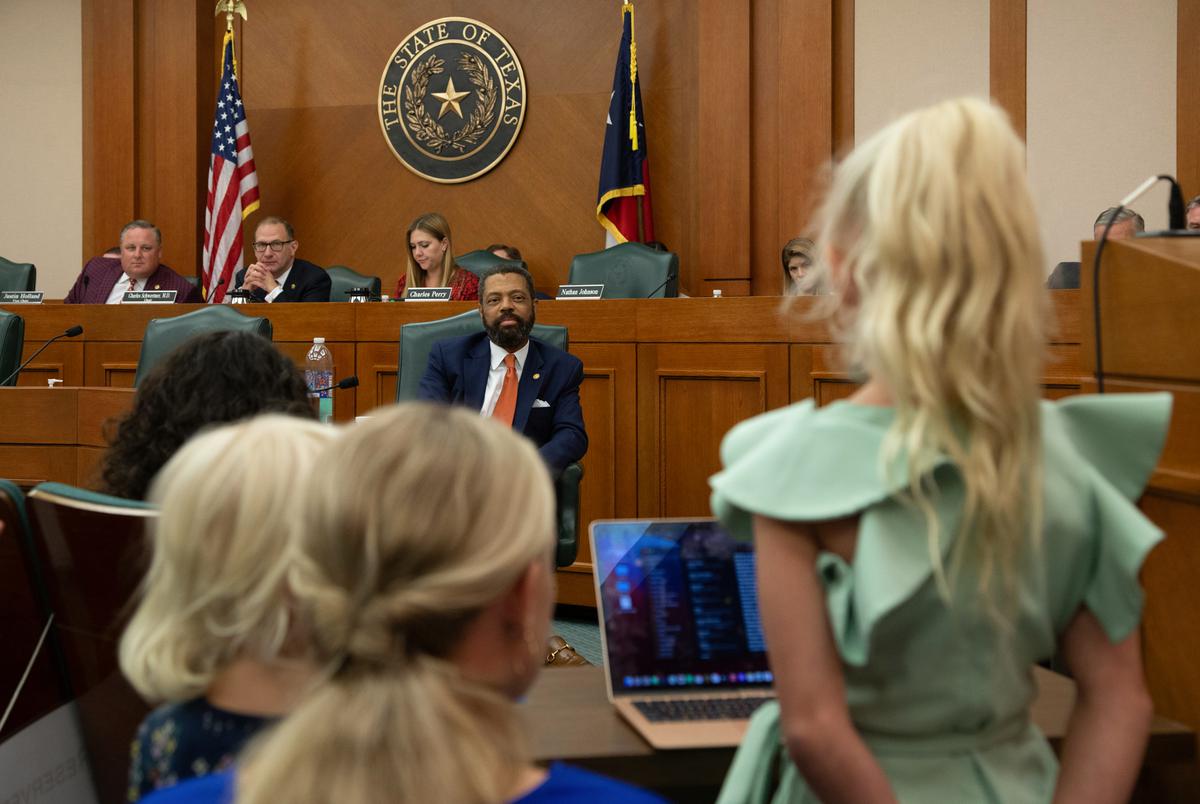 Natalie Diamond, 9, testified at the Sunset Advisory Commission meeting about the TCEQ at the Capitol on Wednesday. Credit: Evan L'Roy/The Texas Tribune

The public testimony followed a presentation and report by the Texas Sunset Advisory Commission staff that said TCEQ’s commissioners have become “reluctant regulators” and that confusion and misperceptions about how the agency operates have created “a concerning level of distrust” of the agency.

“The Sunset Commission Staff report says there needs to be a change in the perception and appearance that the TCEQ works for industry,” said Houston resident Gloria Rubac, 75. “That’s not a perception. It is a fact that TCEQ does favor industry. They favor corporations over our health.”

The Sunset Commission evaluates state agencies’ effectiveness and makes recommendations to state lawmakers as to which laws may need to change to improve them. The last time TCEQ was evaluated was more than a decade ago.

The staff found that TCEQ commissioners, at times, encouraged the industry to “self police,” deferred hard decisions to staff and flagged several transparency problems that, in the report’s assessment, have contributed to an overall public distrust of the agency.

“The commissioners’ lack of visibility in and ownership of TCEQ decision making has only inspired further frustration and distrust among both the regulated community and environmental advocates,” the report said. 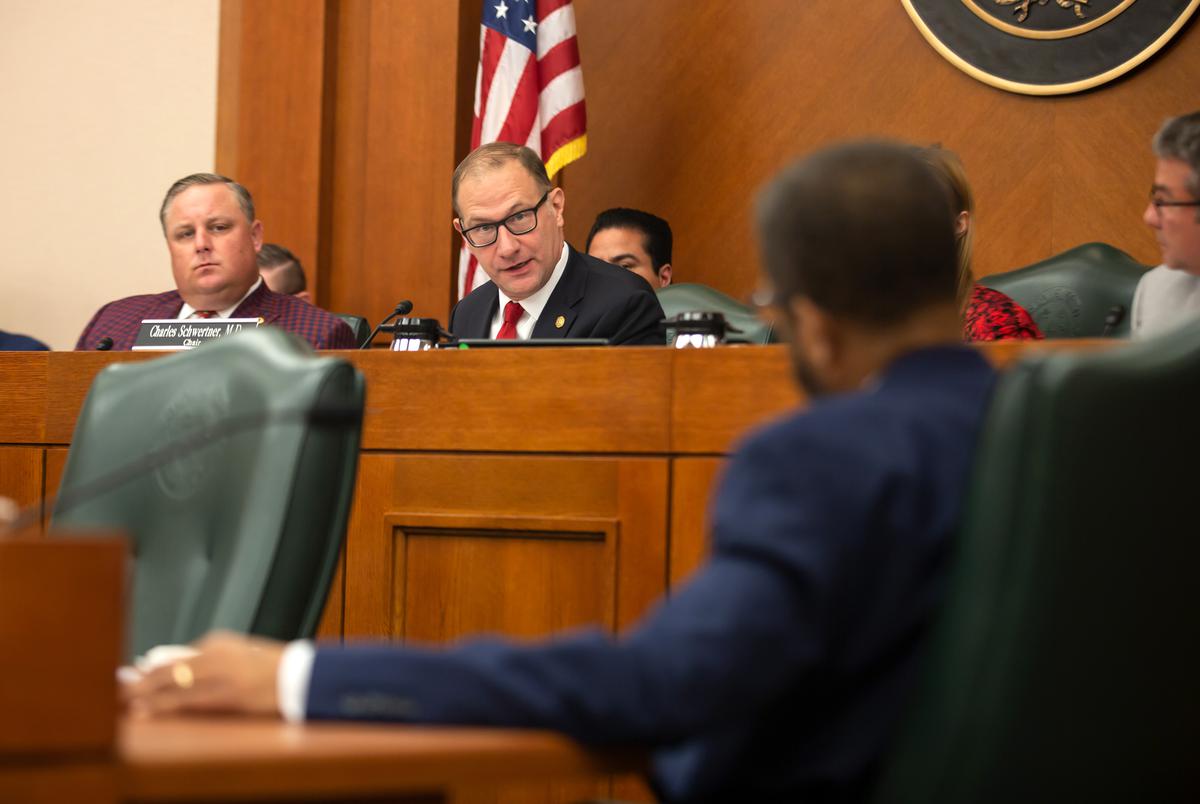 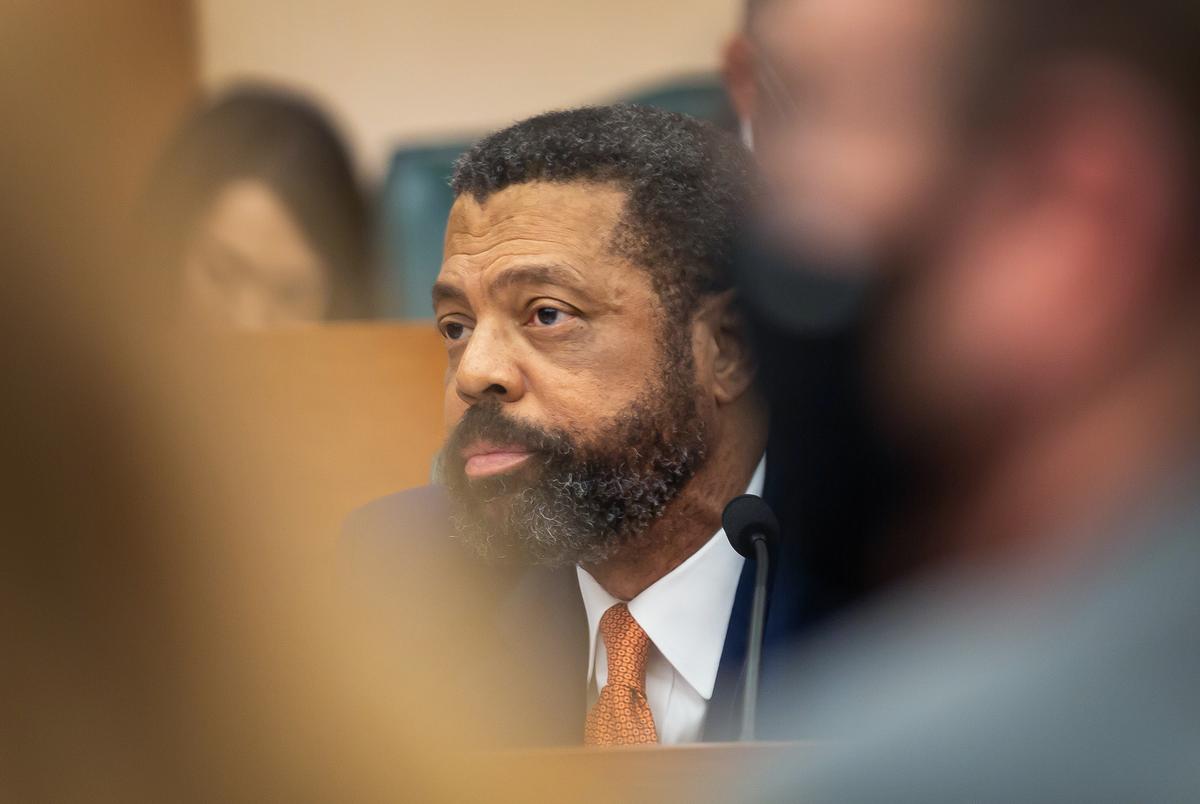 “The concern that we heard from the public is that by the time they’re having the meeting, the TCEQ has already said the permit as drafted is appropriate,” said Robert Romig, who wrote the executive summary of the Sunset Commission’s report.

But few of those recommendations appeared palatable to state lawmakers serving on the Sunset Committee, who pushed back at the report’s finding that the public didn’t trust the agency and raised concerns that adding a new meeting to the permit review process would strain an already under-resourced agency.

State Sen. Charles Perry, R-Lubbock, questioned the finding that the industry was unhappy with the environmental agency, and state Rep. Travis Clardy, R-Nacogdoches, said the Sunset staff recommendations would increase the cost to do business in Texas.

“We will see more bureaucracy,” Clardy said. “More regulation is going to be more expensive for individuals and companies.”

Democrat lawmakers from Houston who attended the hearing emphasized the disproportionate impact of pollution on communities of color and characterized experiences with the agency as frustrating and often fruitless.

“Our experience is that unfortunately the TCEQ rubber stamps these applications,” said state Rep. Armando Walle, D-Houston. “[Texas] has neutered our local governments from allowing them to regulate these industries.”

State Sen. Borris Miles, D-Houston, said one of the most frustrating aspects of TCEQ meetings is that the permits are already drafted and can’t be easily changed regardless of what the public tells the agency.

“What’s the point of a public meeting?” he asked, adding that he supports the Sunset staff’s recommendation of holding public meetings earlier in the process.

In a letter responding to the report, TCEQ Executive Director Toby Baker wrote that the agency “questions some of the word choices and opinions” in the report, but welcomed the opportunity to improve. The TCEQ said it agreed with many of the Sunset Commission’s recommendations, including more transparency, especially in improving its website.

During committee testimony, TCEQ Commissioner Jon Niermann said he wants the agency to be better. “We want to do a better job of communicating with the public,” he said. “We want to be more transparent.”

But he also said some of the Sunset staff’s recommendations — including altering the agency’s compliance history formula to require the agency to include minor violations when considering issuing permits — would be a “more heavy-handed or punitive” approach. Such changes, he said, would require more money and staff.

The committee’s chair, state Sen. Charles Schwertner, R-Georgetown, said lawmakers have some concerns about the Sunset Commission’s report, but would work to better the agency.

“I respect the report,” he said. “There are certain areas people have concerns about, and I have concern about, but I think we are all going to view it in the light of our responsibility to fellow Texans to make sure that this regulatory agency is tuned up.” 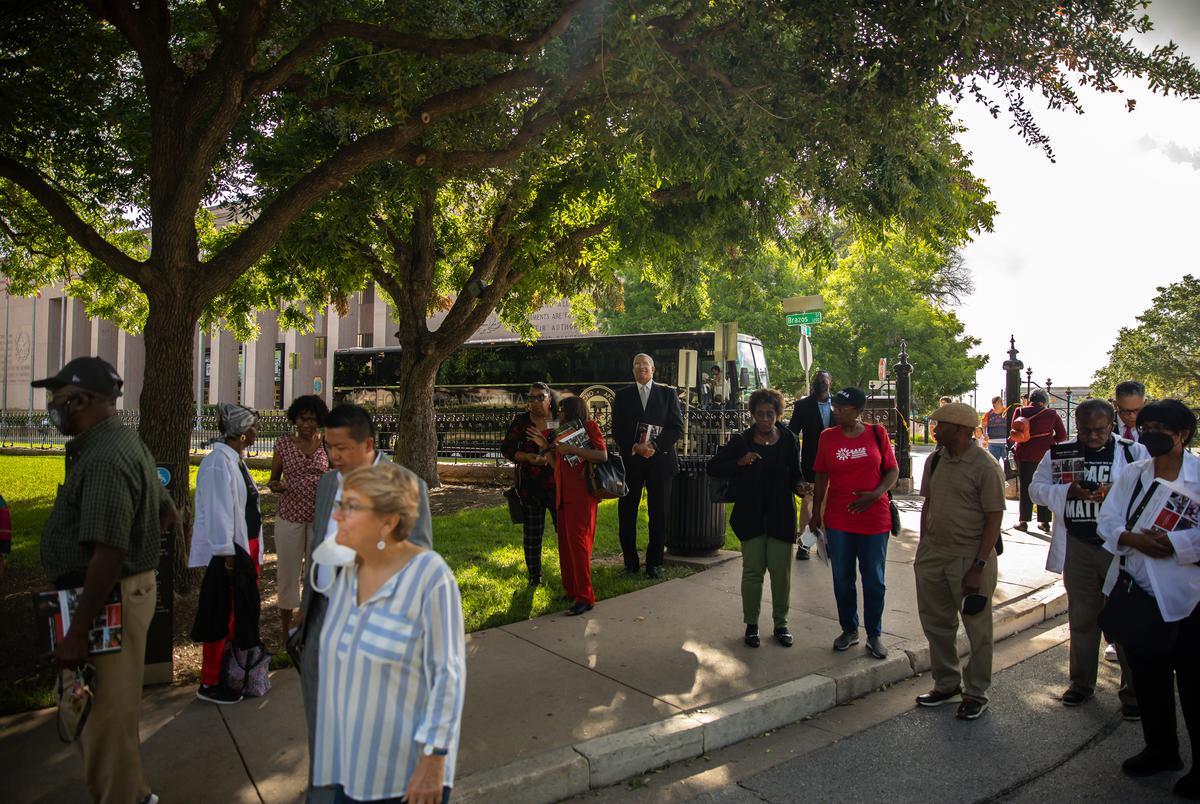 Dozens of Houston residents arrived at the Texas Capitol to testify at the Sunset Advisory Committee meeting on Wednesday. Some left home as early as 4:30 a.m. to speak to lawmakers. Credit: Montinique Monroe for The Texas Tribune

Houston residents testify about pollution in communities of color

Around 100 residents from Houston attended the Wednesday hearing — many boarded buses as early as 4:30 a.m. Wednesday — to speak about their frustration with the agency’s permitting of concrete batch plants and other industrial pollution in predominantly Black and Latino neighborhoods.

The agency’s permits for concrete batch plants became a point of contention during the hearing: Democratic lawmakers peppered Niermann with questions about the agency’s decision-making process.

The facilities pollute the air with particulate matter, which increases the risk of asthma attacks and cardiac arrest if too much is inhaled, according to the U.S. Environmental Protection Agency. Residents near such plants — often built in areas populated by communities of color — also complain about the noise and traffic from heavy trucks driving through their neighborhoods.

TCEQ regulates the air pollution and water runoff from the plants, but cities and local entities regulate other aspects, including where the plant is allowed to locate and how much noise it can make. Outside of cities where there are few zoning regulations, residents say plants have sprung up near their homes, parks and churches.

Niermann said he believes the location of batch plants is determined by economics and the need for services, and disputed some Democrats’ assessment that the agency’s permitting decisions could be racist.

“I do not relish in permitting a concrete batch plant next to a school, but we don’t choose the site,” Niermann said. “That decision belongs with the business owner.”

He said the TCEQ has never done an analysis as to whether there is a correlation between race and pollution sources. 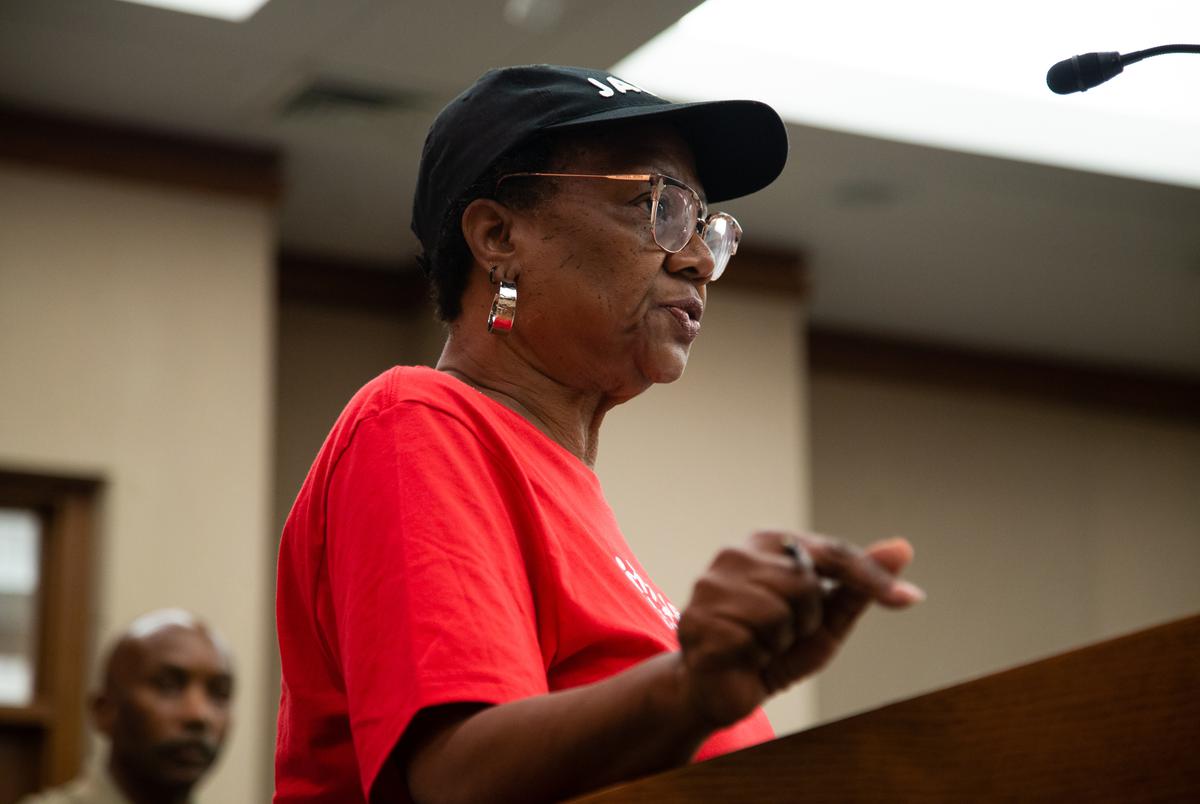 Sandra Harper Scott, a community advocate with We The People, gives her testimony at a hearing for the TCEQ at the state capitol in Austin on June 22, 2022. Credit: Evan L'Roy/The Texas Tribune 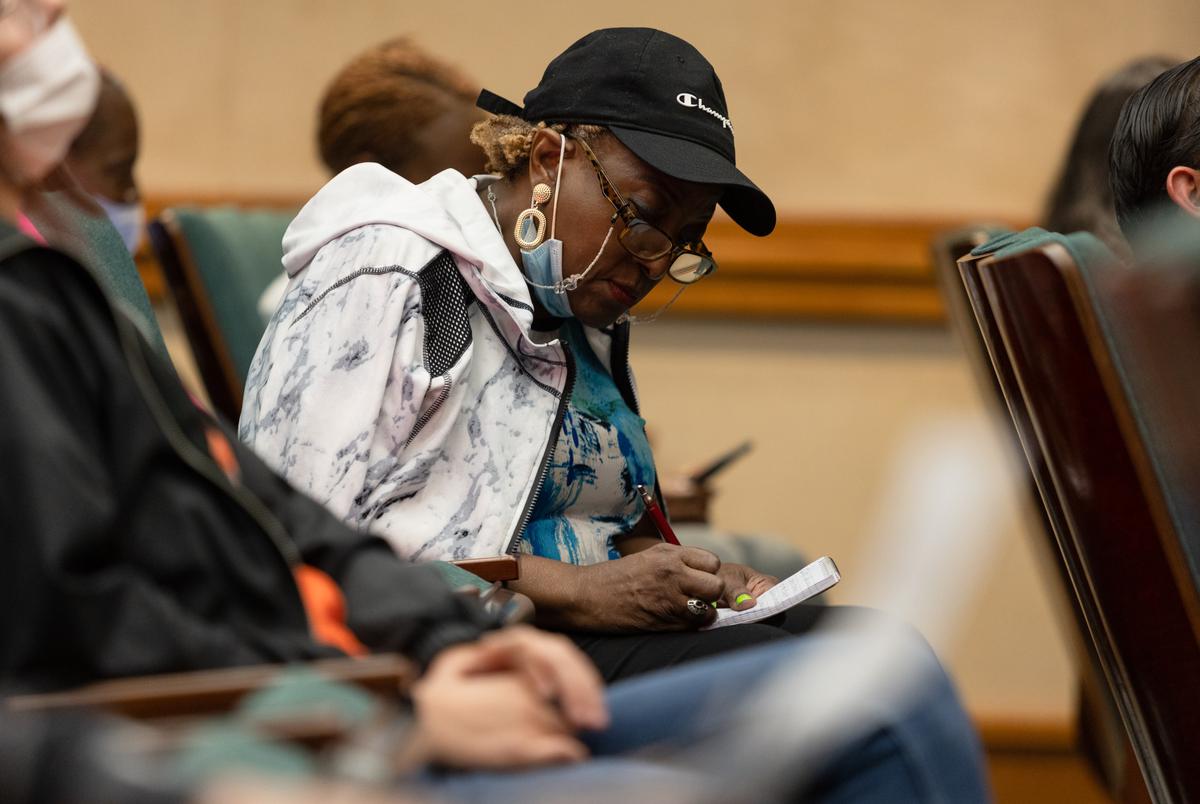 Joetta Stevenson, president of the Greater Fifth Ward Neighborhood in Houston, prepares her testimony during a hearing for the TCEQ at the state capitol in Austin on June 22, 2022. Credit: Evan L'Roy/The Texas Tribune
Ad

First: Sandra Harper Scott, a community advocate with We The People, testified before the Sunset Advisory Commission about the TCEQ. Last: Joetta Stevenson, president of the Greater Fifth Ward Neighborhood in Houston, prepares her testimony. Credit: Evan L'Roy/The Texas Tribune

During public testimony — which lasted four hours — Black and Latino residents called on legislators to require the agency to be more accountable to the public.

“Listen to the people that have come to you today and continue to come,” said Sandra Harper Scott, 66, a Houston resident who lives in Acres Homes. She said her community has dealt with several concrete batch plants and other industrial sites that contribute to unhealthy air quality. “We have asked you, begged you, to help. This House has to help us.”