It’s impossible to know for sure how the new coronavirus got to rural Donley County, but locals bet it took U.S. Route 287, like everything else.

The highway carries 14,000 cars through on a normal day, about four for each of the 3,387 people living in the perfectly rectangular county near the Oklahoma side of the Texas Panhandle. Drivers stop at the Allsup’s or Cornell’s Country Store as they blaze from Dallas toward Denver or back again.

When known coronavirus cases are mapped for each of Texas’ 254 counties, Donley County looks like a sickly glitch, an outlier: It was reporting nearly 7 cases for every 1,000 people as of Sunday. The state’s next-highest known rate of infection was under 5 per 1,000, also in a Panhandle county; in Dallas, that figure was less than 1 per 1,000.

When it got there, the virus that has killed more than 100,000 people worldwide met with formidable opposition: a group of pastors now tending their flocks at a local drive-in theater; a one-family newspaper providing faster, more accurate information than the state health department; and a single local doctor, who also happens to serve as county judge, determined to protect his neighbors by testing as many as he can.

The way county Judge John Howard figures, this farming and ranching community 60 miles from the nearest hospital may actually be better off than some big cities and small towns with fewer confirmed cases. Well over 2% of Donley County residents have been tested; at most six-tenths of 1% of Texans have, although the state testing total includes some people who have been tested more than once. His coronavirus picture may be a grim one, but at least it’s clear.

“If I’m doing four times as many tests as they are for the state as a whole, I’m going to get more positives,” Howard said. “If I hadn’t done any tests, I wouldn’t have any positives. But as the only medical provider in the county, I decided early on that I wanted to know who has it.”

The first hints that Donley County would not be spared came in mid-March. As spring breakers made the long trek down from the Colorado mountains through the county seat, Clarendon, and its attractive rest stops, Roger Estlack, who runs the local newspaper, got a tip from his sister-in-law that the town’s few stores were being pillaged. Locals, used to recognizing their fellow shoppers, suspected the crowds emptying the shelves at their only grocery store came from out of town.

Life’s interruptions were just beginning. A local church postponed two fish fries; a drive-in theater delayed its opening. Perhaps most smarting, the Clarendon College Bulldogs had earned their first-ever spot in the National Junior College Athletic Association basketball finals, but the tournament was canceled before they could compete. 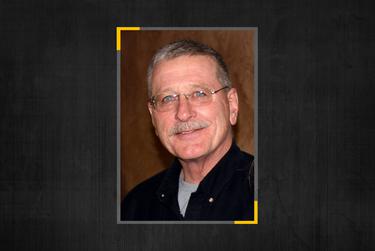 John Howard is Donley County's judge — and its only doctor. Courtesy The Clarendon Enterprise

Howard watched warily as the outbreak spread across Europe. He knew early on he would need to test widely if he was to prevent the virus from spreading to aging neighbors it could kill. LabCorp, the private company Howard uses to run all his labs, initially gave him just five collection kits, and he administered the first on March 17.

A longtime Marine Corps flight surgeon, Howard moved to Donley County more than two decades ago to become the only doctor in town. He prefers rural medicine to big-city hospitals — it’s what he calls “high-touch versus high-tech.” In 2014, his community voted him county judge.

Before cases began to appear in the Panhandle, Howard warned those feeling “complacent” that even remote communities would not be spared.

John Howard is Donley County's judge — and its only doctor. Courtesy The Clarendon Enterprise

Things started to change in Clarendon on March 19, when the first cases were reported in Amarillo, just an hour’s drive away. The city and county issued disaster declarations.

Howard, meanwhile, was still waiting on test results as the promised five-business-day turnaround extended to seven, then eight, then 10.

Frustrated, he turned on March 26 to a new company, Ipsum Diagnostics.

Leaders of several churches convened a joint service at the local drive-in on March 29. They broadcast their sermon to about 100 people and several dogs over FM radio, station 88.7, occasionally asking parishioners to honk their car horns in an ill-tuned “Amen” chorus. Volunteers in gloves and masks gathered collection envelopes in Kentucky Fried Chicken buckets.

“Somebody asked me, ‘How long are you gonna do this?’ And I said, ‘Until this is over or Jesus comes back,’” said Jim Fox, a Baptist pastor who coordinated the service. 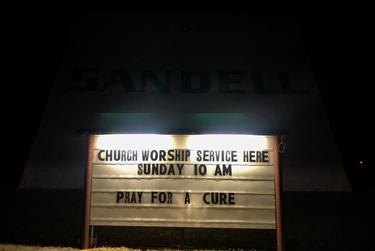 The next night, Howard got a call from a state worker in Lubbock: Donley County had its first positive case, someone who had been tested in a hospital outside the county.

The news reached Estlack the next morning in his office, where he was readying the weekly print edition of the Clarendon Enterprise. He scrapped an article on a recent Clarendon College Board of Regents meeting and got to work on the virus news.

The Enterprise’s small staff is mostly Estlacks: Ashlee, Roger's wife, who helps with social media; Ella, his 11-year-old daughter, who takes photos; and Benjamin, his 13-year-old son, who has been authoring a “Cub Reporter” column since he was 6. The only full-time reporter as well as its editor, publisher, “janitor and bottle washer,” Roger Estlack quickly became a pivotal player in the county’s coronavirus response, calling and texting Howard constantly and updating the case count most days on the paper’s website.

On April 3, Estlack convened a virtual news conference featuring Howard, Donley County Sheriff Butch Blackburn and other local leaders — “new territory, not just for this newspaper,” Estlack said. With a bushy mustache and an even keel, Howard addressed his constituents, sitting in front of an American flag, a Texas flag and a list of the Ten Commandments. Beside him, in a bright blue button-down and a star-shaped gold badge, Blackburn interlaced his fingers over his belly, looking solemn. 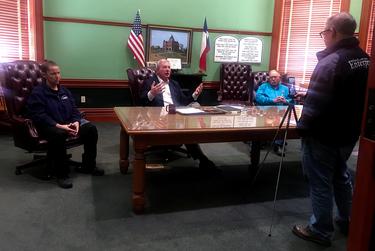 Invited to comment on Facebook, locals fretted their questions up the chain. Did they need written permission to feed cattle just outside town? Could they still deliver eggs to customers? Could they have family over, even if they didn’t live in the same household? And what could Howard tell them about who was ill so far?

Howard offered little identifying information — describing a sick resident as a woman in her 30s limits the guessing pool substantially in a place like Clarendon — and less undue comfort.

“Everything you touch should be considered to be contaminated,” he said. Anyone might brush a contaminated gas pump, then touch her face because a “Panhandle wind blew some dust in your eye.” He was calm but serious: The virus could spread rapidly.

By then, Howard had begun receiving rapid test results from the new lab. Faster data made the spread look faster, too. By April 8, there were 13 cases in the county; two days later, there were 21. The county’s current total is 23. In a small town, most people knew who was sick even without public announcements. And even without doing robust contact tracing, Howard could make inferences: Three people seemed to have all gotten the virus after spending time together socially. Prayer chains formed among churches, naming the ill.

Meanwhile, the state still reports that surrounding counties remain healthy. Of the eight counties that ring Donley, four have not reported any cases at all.

“In a rural area, in farming communities, for all practical purposes they’ve been practicing social distancing forever,” said Kel Seliger, a Republican state senator from Amarillo who represents the vast grid of rural Panhandle counties.

In some rural counties, “there’s no confirmed cases cause there’s no testing,” said John Henderson, the president of the Texas Organization of Rural and Community Hospitals and former executive of a hospital 60 miles from Clarendon in Childress.

“I dare say it’s widespread in other communities,” Howard said. “But they may not be testing at the rate that I’m testing.”

Ray Powell, judge of Donley’s neighbor to the south, said, “If we have anyone in Hall County with that virus, we don’t know it.”

A hospital in Hall County went bankrupt in 2002, and the county’s health clinic closed two years ago when the nurse practitioner running it retired. A couple of years ago, when Powell’s wife was diagnosed with lung cancer, they had to travel 90 miles each way to Amarillo for appointments.

“So if anybody gets tested, they have to leave the county to do it,” he said. “We’re just sitting here wondering — do we have any running around? Surely we do because of our neighbor, Donley County.”

Howard says his role as county judge informs his practice as a doctor as much as the other way around. A confirmed COVID-19 diagnosis doesn’t much change a patient’s course of care, but data guides government decisions.

Officials believe the high case count has helped them corral locals into following their stay-at-home order. Clarendon Mayor Sandy Skelton said his constituents are resilient, not scared. He and his wife have continued to deliver Meals on Wheels weekly, though his 101-year-old mother is furious that she’s no longer allowed to tag along.

At Monroe’s Peach Ranch, along the highway, Collin Monroe is selling fewer and fewer jars of peach butter, wondering whether his high school graduation this spring will have to be done as a drive-thru. Local businesses are hurting, but most are family-owned stalwarts likely to weather the outbreak.

Several Donley County patients had to be hospitalized, and two were put on ventilators. But by this week, many of the county’s 23 cases had made it into the coveted “recovered” category.

The husband of a pregnant woman was among those who tested positive for the virus. Doctors delayed her inducement date, and now mom, dad and baby are all testing negative and doing well, Howard said.

Howard predicts that when the outbreak subsides and antibody tests reveal who had the virus, Donley County won’t look like much of an outlier anymore.

“Some small cities and counties are not testing anybody,” Skelton said. “Maybe they don’t want to know. But we want to know in Clarendon.”

Disclosure: The Texas Organization of Rural and Community Hospitals has been a financial supporter of The Texas Tribune, a nonprofit, nonpartisan news organization that is funded in part by donations from members, foundations and corporate sponsors. Financial supporters play no role in the Tribune’s journalism. Find a complete list of them here.