Trust Index: Can hydrogen peroxide be used as a disinfectant to kill COVID-19?

“I’m over it. I need a haircut.” Eager but nervous Texans venture back into busy salons and barbershops

Published: May 8, 2020, 5:02 pm
Tags: Politics
Stevin Kane, who has owned and operated Kane's Barber Shop since 2006, gives his first haircut of the day to loyal customer Larry Franklin. Jordan Vonderhaar for The Texas Tribune

On Friday morning, Larry Franklin, a case manager supervisor, pulled up to Kane’s Barber Shop in East Austin with a protective face shield to get a highly anticipated bald fade. Right as the clock struck 10 a.m., Franklin was seated; his barber behind him wore a similar mask and black latex gloves.

“I normally come in once every 10 days,” Franklin said, sheepishly admitting he was nervous to venture outside of his home in the first place. Laughing, he added, “I’ve been cutting it myself, but I’m over it. I need a haircut.”

Despite playful banter among the barbers and customers there — they exchanged wisecracks about playing PS4 together and having a private group text — the appointment had little in common with a typical trim. Crosstalk was stifled by face masks. Sports, on pause since the coronavirus pandemic, weren’t on the TV; the Fox Sports 1 talk show “Skip and Shannon: Undisputed” was on mute in its place. The benches where customers typically seat friends or family members were empty.

But the shop itself was busy on the first day in weeks that barber shops, hair salons and nail salons have been allowed to open in Texas. Stevin Kane, Franklin’s barber and the owner of the shop, and four other barbers juggled fades, tapers and beard trims. All were booked through the end of the day. Kane alone had 16 more customers scheduled through Friday evening, for example.

He and his cohort had come in around noon the day prior to bleach the floors and clean the bathroom. He has also restocked a vending machine — “I wanted to make sure I put fresh goods in there,” he said, nodding toward the apparatus fully stocked with Gatorades, Flaming Hot Cheetos, Oreos, Snickers and other goods.

As he spoke, he pointed to a fellow barber two chairs to his right: “Right now, he’s doing another wipe down before his customer comes in,” Kane said as his clippers made their way toward Franklin’s ears.

The establishment was understandably cautious. Gov. Greg Abbott had announced he was opening salons just days prior, after initially leaving them off the list of businesses that could open amid the coronavirus pandemic. Under Abbott’s latest directive, shops could reopen at 25% capacity. Hairstylists, too, had a set of rules they needed to follow: one customer at a time, a recommended appointment-only system, styling stations 6 feet apart and a strong requirement stylists wear masks. 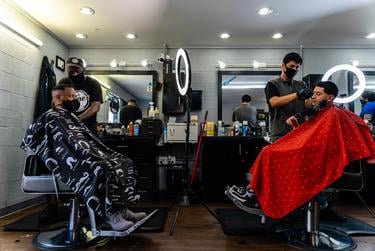 Stevin Kane and Ramiro Cruz give haircuts to customers, after Kane's Barbershop reopened from being closed due to the coronavirus pandemic. Jordan Vonderhaar for The Texas Tribune

Not everyone agreed with the reopenings. Rick Levy, the president of the Texas AFL-CIO, argued that “the state’s own data do not support the current Texas timetable or the current Texas plan for reopening.” Without revisions, he said, the governor’s moves “will simply backfire in a very big way, harming both Texas workers and the economy.”

But a hankering for professional grooming has become a leitmotif on social media, with a spate of lawmakers and Texans posting images of unkempt hair and poor attempts at self-administered haircuts. In some cases, Texans have resorted to skirting government regulations. Two Republican lawmakers got illegal haircuts, while a hairstylist in Dallas and two in Laredo were reprimanded for offering their services before Abbott lifted the restrictions put on many self-employed beauticians.

Indeed, customers were antsy for a return to normalcy.

Demeatric Callaway, a fellow barber, had 11 customers lined up for Friday alone.

“Sure enough, within a day or two, we’re all booked up,” Callaway said. He said he found out Kane’s could reopen by a customer who texted him as soon as he saw the news reports that barbershops were allowed to reopen their doors.

Callaway responded, “Well, I guess I will be there.”

One text soon turned into a deluge of calls and other queries asking his availability.

His first customer of the day on Friday, Darrell Bush, a 33-year-old store manager at Austin’s Pizza, admitted Kane’s was the first time he’s left his house to receive a service since the pandemic began.

“The only places I’ve been are on the lake running, H-E-B and work,” Bush said. 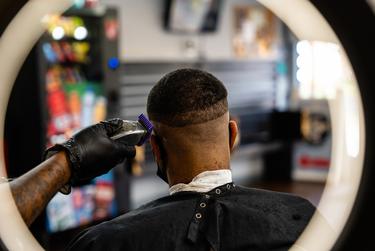 At Kane’s shop, the owner had face masks available to customers who either didn’t have one or forgot one at home; stylists wiped down chairs with disinfectant after each client. While new customers were permitted, they would have to call beforehand to see if they could be squeezed in a time slot so there wouldn’t be too many people in the shop at once.

Farther north, at Sola Salon Studios, similar precautions were taken. Though getting your hair styled at the moment focused more on efficiency than pleasure. A laminated sign taped to a black chair by the entrance recited a laundry list of requirements. “Everyone MUST WEAR FACE MASKS while in common areas.” “If you are sick or have a fever, please DO NOT ENTER the salon.” “ONLY ONE CUSTOMER per BEAUTY PROFESSIONAL ALLOWED at all times in the salon. Please wait outside of the salon and your beauty professional will greet you. ABSOLUTELY NO WAITING in the hallways.”

“So far, being back has actually been pretty good. Everybody’s trying to adjust to the new rules and procedures, so it’s an adjustment compared to our normal work environment, but at the same time we’ve got to make it work,” said Aquita Gaddis, a hairstylist who started her day Friday at 9:30 a.m. and anticipated working until 11 that night.

“The hardest thing right now is making sure we get everyone in and out within a timely manner so that other clients are not sitting and waiting in their car,” Gaddis said. “But at the same time, it stretches out our comfort zone to make us work harder.”

Jordan Vonderhaar for The Texas Tribune

Avion Potter, 23, sat in Gaddis’ chair getting a relaxer and “trusting [Gaddis] to make my hair look good.” Potter said she has been seeing Gaddis for two years, and said she’s been doing her own hair while shops were closed.

Potter has been taking precautions over the past two months because her son’s immune system is compromised, and she trusted the salon and Gaddis to take the necessary precautions to make sure the salon and each client felt safe.

In Gaddis’ case that looks like the following: requesting customers text when they’re on their way. (“OK, I have another 20 minutes to wrap up with the client.”) When they arrive, he or she must text Gaddis first. (“We have to greet them at the door.”)

Several stylists interviewed said times have been tough, both personally and financially, over the past few months. Though unable to legally work from home, some admitted to knowing others — or getting texts from clients — asking to see them for house calls, often in a customer’s own home or in the stylist’s.

“I never did it, but we were asked daily,” said Lynese Marchica, a 71-year-old barber who works with her son, Nicholas Gasper, at Sola. “People would ask me to come to their house and I was just like, ‘No, I’m not risking my license for that.’ And I had strange calls from people I didn’t know.” 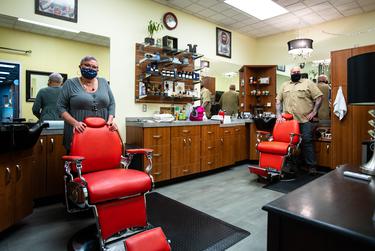 Lynese Marchica and her son Nicholas Gasper pose for a portrait in their shop on their first day reopening after closing during the coronavirus pandemic. Jordan Vonderhaar for The Texas Tribune

Marchica also had a sterilization routine down-pat. She carved off an extra 15 minutes between clients in order to totally sanitize everything. She told her customers to wear masks; those who didn’t would be sold one for $3. She sprays the air with a disinfectant that she said takes 10 minutes to fully set. She also has another spray “that kills all the flus and all that stuff” that works in under two minutes, she humbly bragged of.

In lieu of cash transactions, she said, several customers paid virtually through Venmo.

In Fort Worth, some professional grooming businesses said they weren’t taking any unnecessary risks. Ben Hudgins, a stylist, founder and owner of the Novak Hair Studios, who also reopened Friday, said he encouraged his 80 stylists to come in at a time that felt comfortable to them.

Only 20 opted to begin work on the first day of the reopenings.

When customers first walk into the spacious 10,000-square-foot salon, Hudgins said, they’re immediately greeted by someone on the guest services team. While pleasantries might’ve been the routine pre-coronavirus, it now includes a thermal forehead temperature check (for stylists and staff, too) and a brief check-in on customers’ health and well-being.

On Thursday, Hudgins said his guest services team called everyone who had pre-booked an appointment to update them about the new sanitary protocols and to make sure they’re feeling well. After their respective check-ins with the guest services team on Friday, they can receive whatever service they’re coming in for. Hand sanitizer will also be readily available.

There’s so much pent-up demand that some people are still waiting for a chance to get in. One of Hudgins loyal clients, 42-year-old Justin Williams, said he’s eager to get his first haircut post-quarantine, but doesn’t think he’s in too poor of a position right now, currently describing himself as “just shaggy.” Still, he added, “As soon as Ben has a spot for me I’ll be in.”

“I get a short haircut,” he said. “It helps me to look like a stylish 40-year-old without looking like everybody else, but also not looking like, you know, I watch too much MTV.” 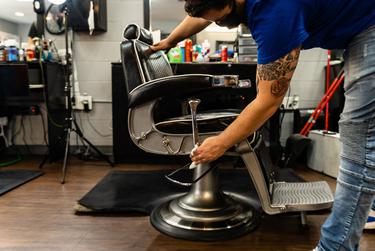 Demeatric Callaway, a barber at Kane's Barbershop in East Austin, wipes down his chair with disinfectant in preparation for his first customer of the day. Jordan Vonderhaar for The Texas Tribune

But, stylists, too, were just as anxious to get to where they felt most at home — behind a styling chair, massaging someone’s scalp, trimming their ends and, in essence, getting paid to learn more about their customer’s personal lives, while providing a pleasurable service.

“We’ve all gone six weeks without any money,” said Heather Manto, the owner of an Austin-area barbershop. “We’ve had so little support through this whole thing because we’re service-based.

“For a lot of contractors, there’s no health benefits and no retirement plan,” she added. “I make that I bring in. What do you do if you’re living paycheck to paycheck?”

After noon on Friday, Kane said he’s already seen and completed treatments on seven clients, each coughing up $35 per cut.

“I feel blessed to be able to come back,” he said via text message.