9 warnings in effect for 5 counties in the area

‘She died a hero,’ says brother of teacher shot, killed during domestic incident

One of the most haunted hotels in the U.S. is in downtown San Antonio, report says

Improve your audio experience with these wireless headphones

Since he moved to Austin in 1992, Derek Lorentzson has worked for a drywall company, the shipping and receiving department at a computer company and later served in the Marines, he said. About a decade ago, he started living on the streets.

“My wife died, and I kind of quit caring about stuff and ended up out here,” Lorentzson said at the end of July while sitting under a highway where he’d temporarily pitched his tent with his 4-year-old Chihuahua, Karma. “Once you get homeless it’s real, real hard to get un-homeless.” 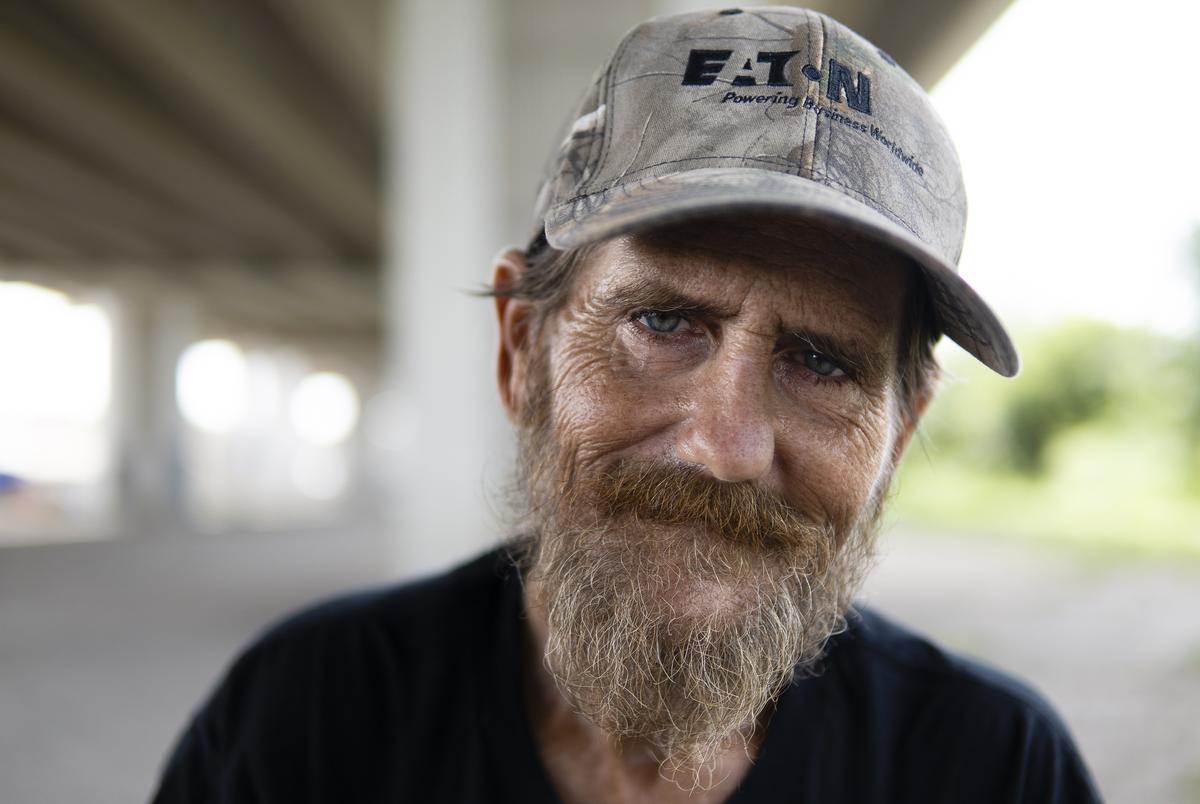 Derek Lorentzson, in front of his tent underneath Ben White Boulevard in Austin, says he’s been without housing for about 10 years. Credit: Sophie Park/The Texas Tribune
Ad

As the city starts enforcing its reinstated public camping ban this week, the 48-year-old said he planned to move his gear to a more secluded place.

“I’m not going to stay under here,” Lorentzson said. “It’s bad enough that I’m homeless. I’m embarrassed about it enough. I don’t want to be right here where everybody can see me all the time.”

Clusters of tents and shelters are still evident next to busy roads and beneath overpasses around the city. And three months after voters approved a renewed ban on camping in public spaces through a ballot initiative called Proposition B, the city says it will begin to fully enforce the ordinance this week.

After weeks of working to educate people experiencing homelessness about the ordinance and handing out warnings, city officials say police will begin ticketing anyone camping on public land — and arresting those who still refuse to leave their camps. Violating the ban is a Class C misdemeanor, punishable by a fine of up to $500.

The Austin Police Department said in an emailed statement that arrests “will be made only as a last resort with an emphasis on connecting resources and services to the individual.”

City spokesperson Yasmeen Hassan said many people have already abandoned their camps on public property. But she declined to say how — or when — the city will actually remove the homeless camps if people refuse to voluntarily leave.

Meanwhile, the city has struggled to find alternatives for people now packing shelters and camped in public spaces. It’s bought or leased at least three former hotels to supplement a network of city shelters, but doesn’t have nearly enough space for the more than 3,000 people estimated to be without housing in the city. 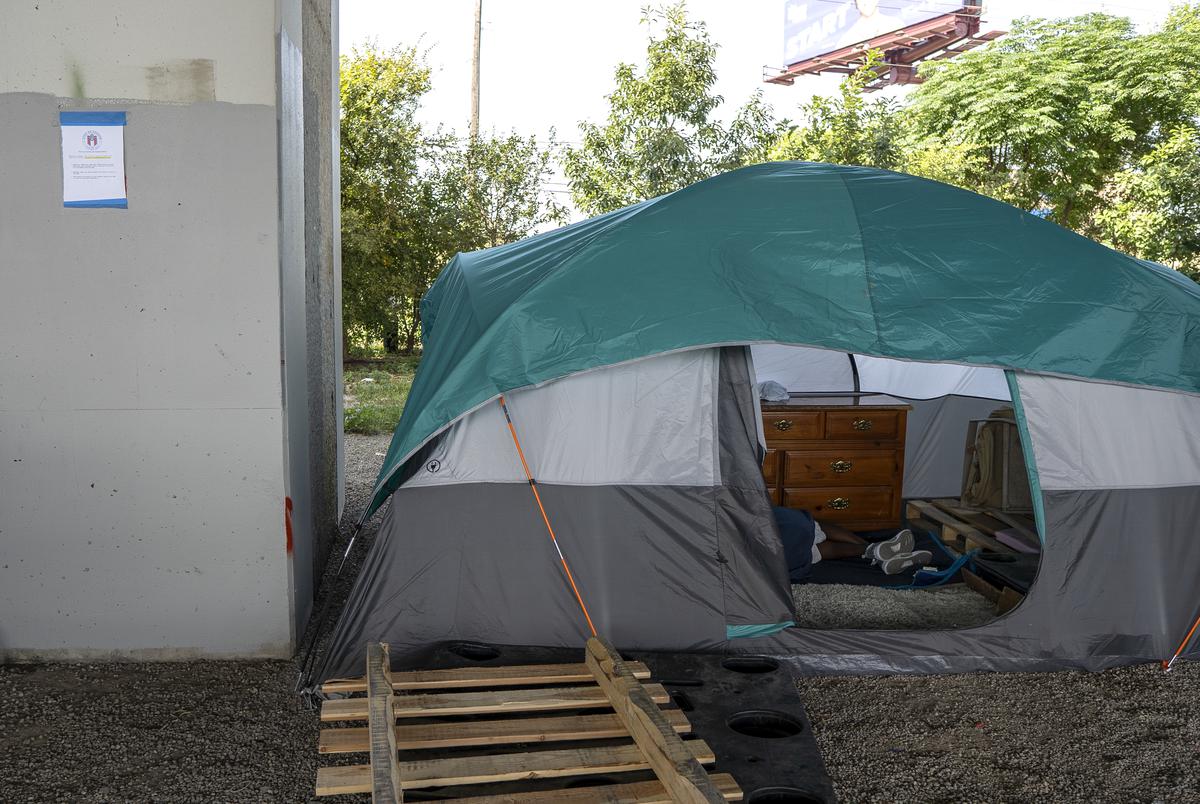 “There is no good way to implement this proposition because there isn’t enough housing or safe places for people to go to,” said Austin City Council member Greg Casar. “That’s the core reason why we’ve tried to reduce arrests and citations in the last couple of years, was to establish hundreds more places for folks to safely go.”

The city’s enforcement push comes less than a month before a statewide ban on public encampments goes into effect on Sept. 1 — a law that followed Gov. Greg Abbott’s repeated criticism of Austin’s decision to repeal the city’s camping ban in 2019. The new state law criminalizes public camping and bans cities from adopting policies that prohibit or discourage enforcing any public camping ban. Cities that adopt such ordinances could risk legal action from the state attorney general and potentially lose state grant money.

Eric Samuels, president and CEO of the Texas Homeless Network, said local ordinances and the state law won’t do much to solve the problem of homelessness.

“We can’t fine or arrest this away,” he said. “I mean, that’s never worked in any community, ever. And it’s going to be the case with this too.” 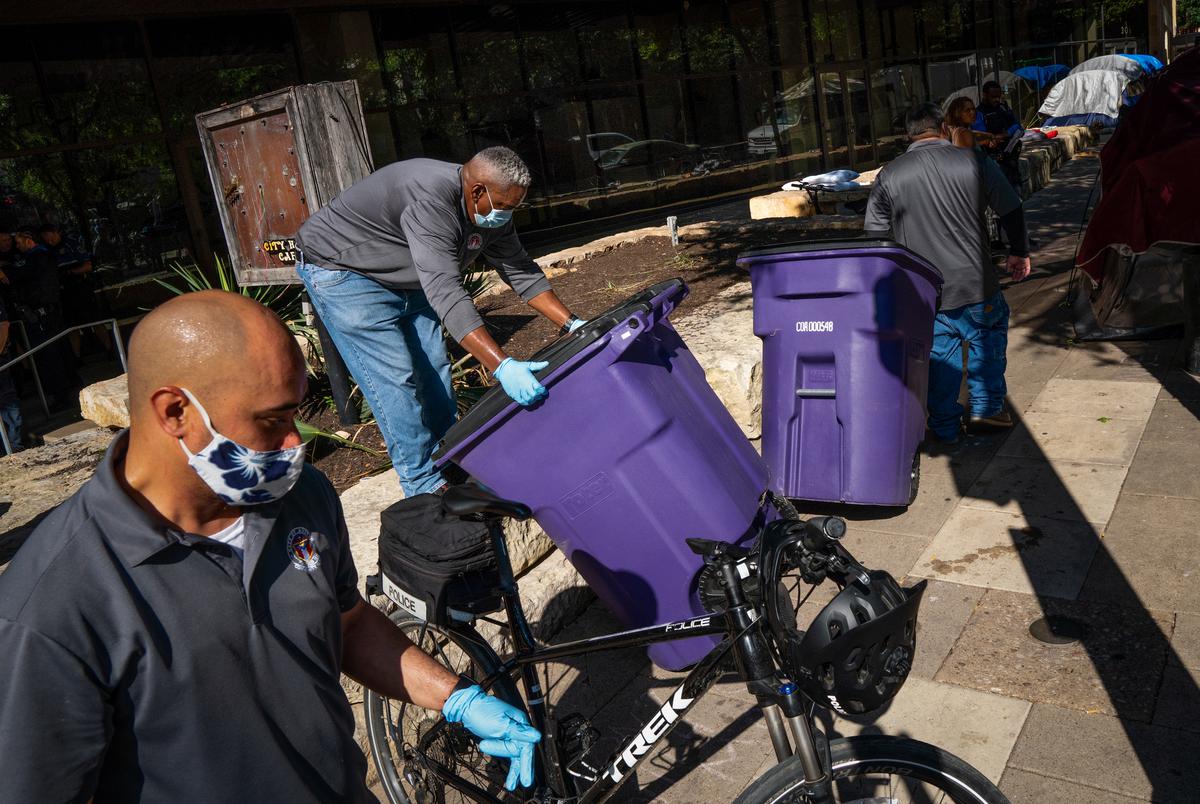 Since Proposition B took effect, the city says it has cleared out few encampments — including a cluster of roughly two dozen tents outside Austin’s City Hall that police removed in mid-June that were cleared because of a construction project and for trespassing on private property.

Three other encampments — on the city’s east side, in South Austin and in downtown — have been cleared as well. About 70 people were moved into a former Rodeway Inn that now serves as a city-owned, 75-room bridge shelter — a temporary place for people to stay as they wait for more permanent housing. Another 60 people were moved into another former hotel that has 65 rooms.

The city’s plan to purchase a former Candlewood Suites hotel and convert it to 80 units of affordable housing has been bogged down by protests and litigation. The city has also identified two city-owned properties as possible encampment sites, but under the statewide public camping ban, cities would need to get approval from the Texas Department of Housing and Community Affairs before designating a property as an encampment site.

Including the two former hotels operating as bridge shelters, the city hopes to add up to 300 beds to the roughly estimated 700 emergency shelter beds managed by homeless service providers in Austin and Travis County in 2021. 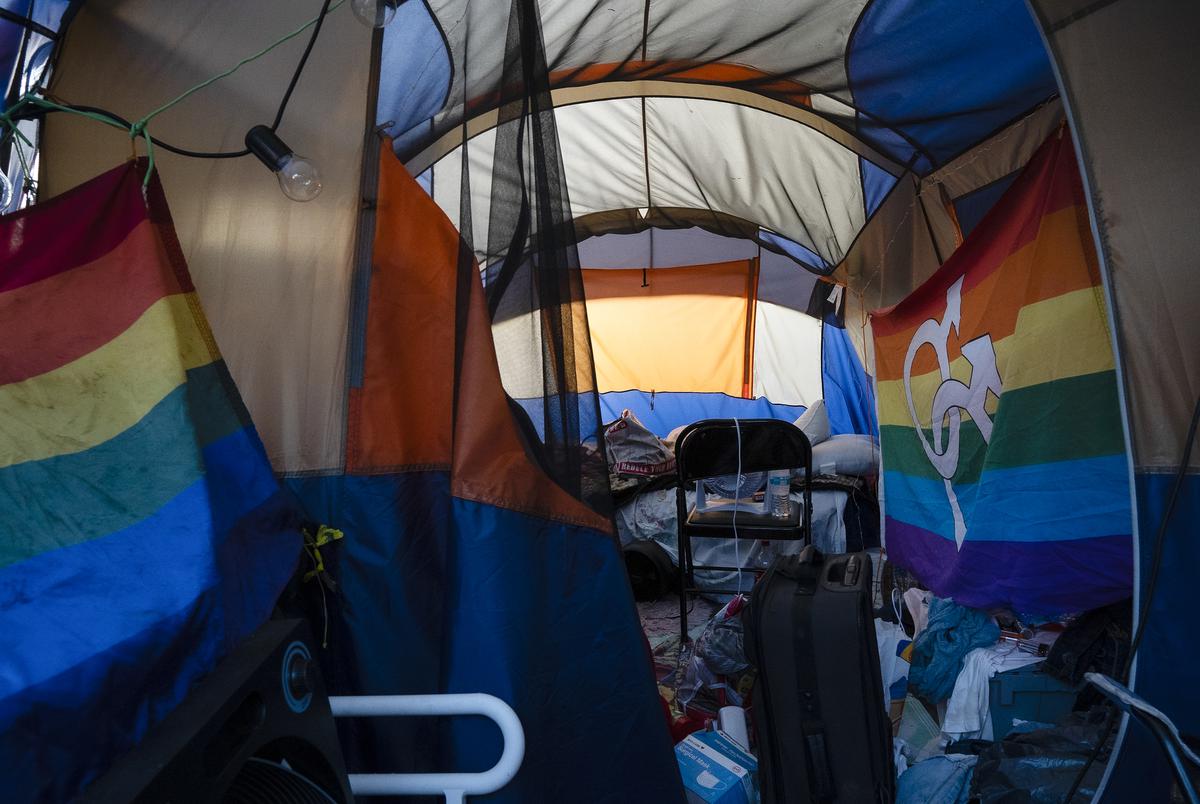 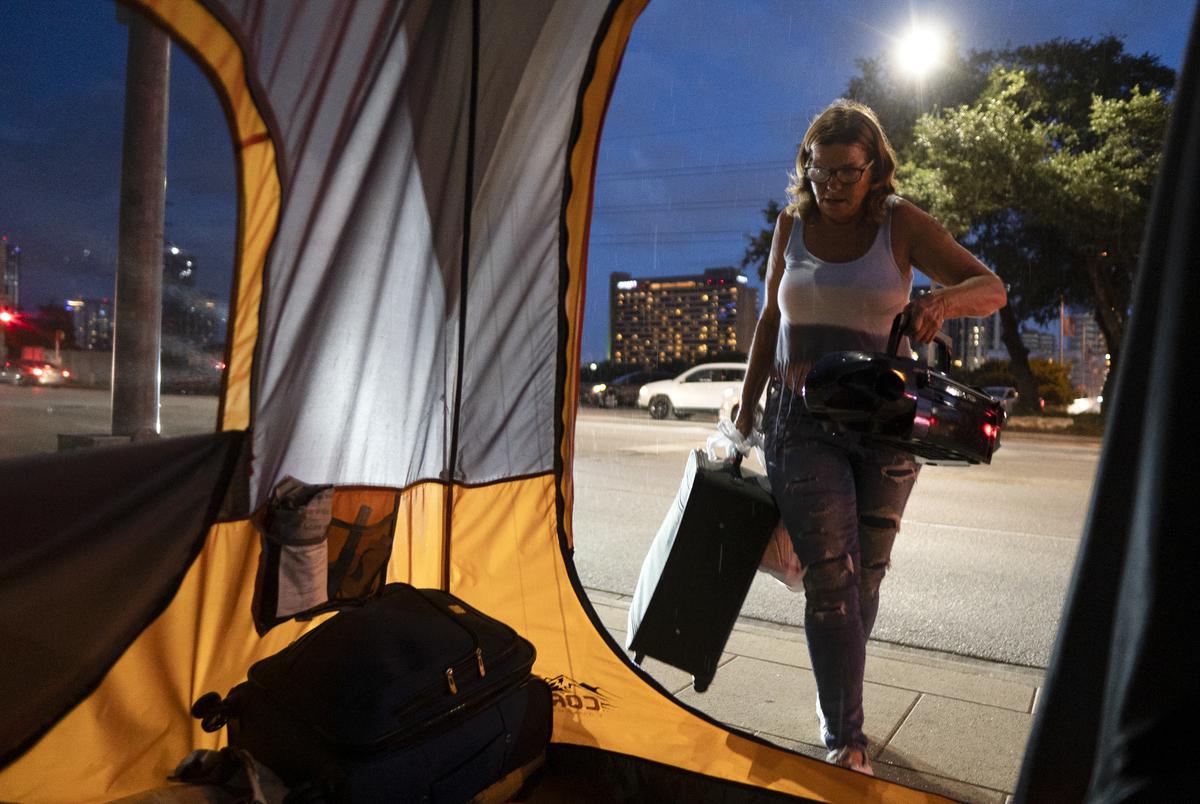 Christina Jezzizki starts preemptively moving her belongings to avoid being arrested for camping in front of Austin City Hall, but is interrupted by rain on July 10, 2021. Credit: Sophie Park/The Texas Tribune

The city also has touted about $106.7 million in funding it has allocated to expand housing and services to individuals experiencing homelessness, most of it dedicated to a goal of housing 3,000 people in three years — part of a nearly $515 million plan that will require financial support from Travis County and community partners.

Last week, the city’s public safety commission, an advisory body that offers recommendations to city council, recommended that city leaders direct the Austin Police Department to halt tickets and arrests related to Proposition B unless housing options are available for those who are unsheltered. It’s not clear if the city council will take up the commission’s recommendation.

“It’s impossible, at this point, to safely and humanely relocate people, and there just isn’t capacity at this point,” commission vice chair Nelly Paulina Ramirez said during the commission meeting.

At the same meeting, Dianna Grey, the city’s homeless strategy officer, said people experiencing homelessness have been voluntarily moving from public property when they’re offered housing, dispelling the myth that they do not want shelter or housing.

“Our experience so far reiterates this, that people want shelter and housing and so people are typically voluntarily relocating,” Grey said. 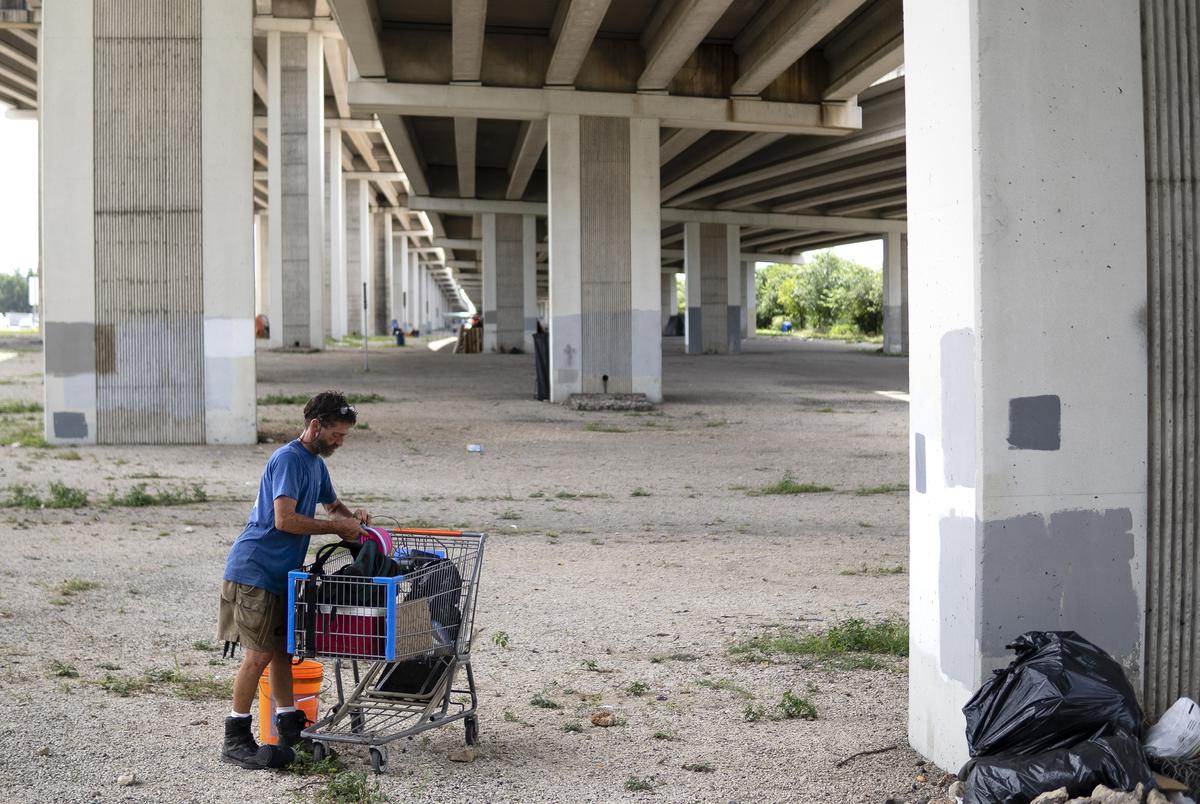 Austin officials say that when police arrest someone for violating the new ordinance, they’ll go to the city’s diversion community court rather than being booked into jail.

The court offers social service support and can connect people with case managers. As of early July, about 300 people were on a waiting list for a case manager, the city said in a statement. Andy Tate, a city spokesperson, said defendants who don’t have case managers will still be able to access some services such as obtaining identification documents, applying for public benefits and accessing medical and mental health treatment.

Advocates for people experiencing homelessness like Karly Jo Dixon, a managing attorney with the Texas Fair Defense Project, still worry that ticketing individuals who camp publicly will lead to arrest warrants being issued for them if they’re unable to pay the tickets or show up for required court dates. Warrants and criminal records can make it harder for people transitioning out of homelessness to rent an apartment or access public housing, she said.

“There’s just no housing solution [right now],” Dixon said. “I do not understand how we can criminalize people for literally trying to survive when there are no other options available.”

According to the city, if a person is fined but can’t pay, “Austin Municipal Court judges will attempt to find alternatives to the fine such as community service work.”

Cleo Petricek, co-founder of Save Austin Now, the group that brought forward the ballot initiative to reinstate the city’s camping ban, said criminalizing homelessness was never the intention.

“This has never been about criminalizing, it’s about getting [those experiencing homelessness] to seek service and to seek shelter,” Petricek said. 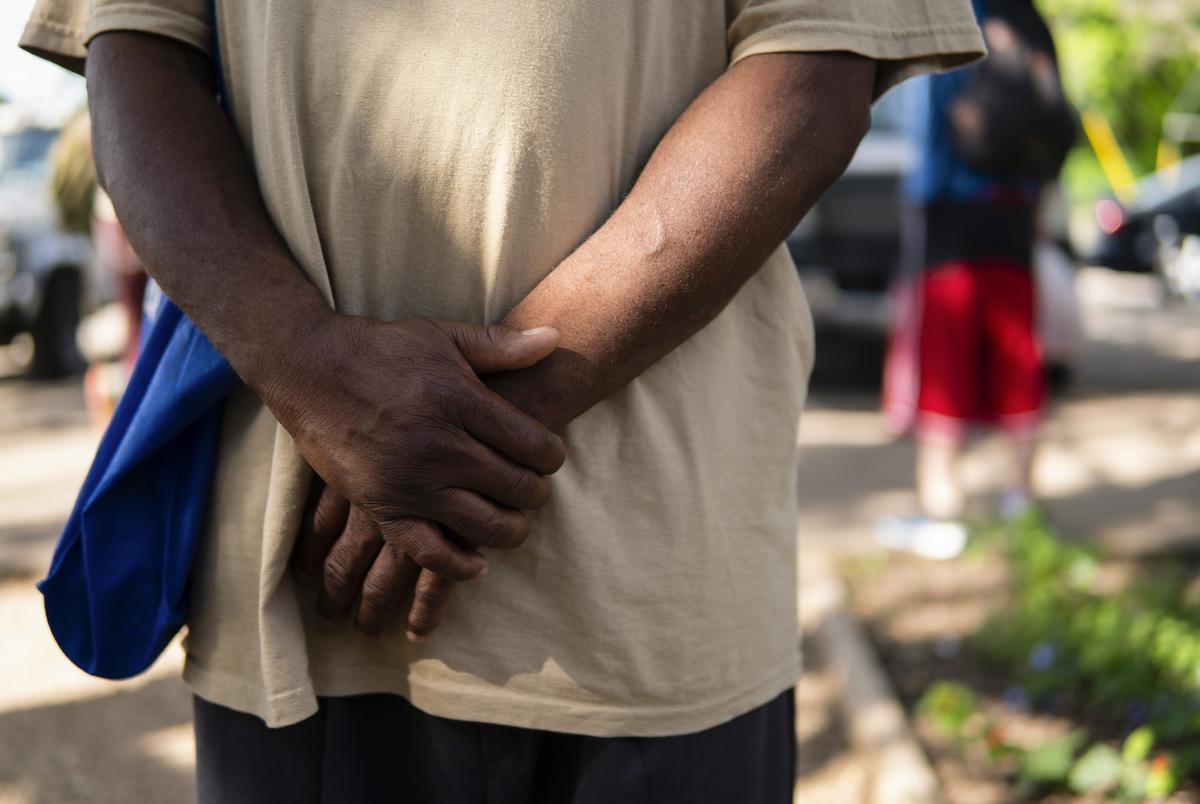 Luke White, 48, who said he’s been homeless off and on for more than a decade, said he’s received many tickets over the years for sitting or lying in public places.

He said he hasn’t paid any of the fines, adding that the police would be doing him a “favor by taking me to jail,” because it’s better than sleeping on the streets.

White said he was recently assigned a case manager to help him find housing and figure out what to do about the tickets he’s accumulated over the years. And he recently got a job working busing tables at a downtown Austin restaurant. It doesn’t pay much, he said, but it gives him hope that he can get off the streets later this year.

“I want my housing now while I’m alive,” he said.

Colleen DeGuzman contributed to this report.