Man wounded in shooting while driving on highway, SAPD says

Perk up in the morning with a reusable Nespresso pod

Sign up for The Brief, our daily newsletter that keeps readers up to speed on the most essential Texas news. We've got full coverage of redistricting in Texas. Want to see which districts your home is in? Check out the new Texas political maps here.

Running for Senate District 9 would have seemed an uphill battle just a few years ago, but Salman Bhojani saw the growth in his North Texas community over the last decade as an opportunity.

State Sen. Kelly Hancock, the Republican incumbent, first won the district in 2014 with 65% of the electorate. But SD-9 has changed, fueled by population growth from Asian, Black and Hispanic Texans. Four years after Hancock first won, his portion of the total vote dropped to 54%. By 2020, President Donald Trump won the traditionally Republican district that spanned Dallas and Tarrant counties by only slightly more than 5,500 votes.

Bhojani, a Pakistani immigrant who in 2018 became the first Muslim to serve on the Euless City Council, thought he might have a chance against Hancock if he jumped in the race early enough as a Democrat. He announced his candidacy in May, built up a campaign staff and started producing video campaign ads.

But then, redistricting happened. Over the last few weeks during the third special session that ended Tuesday, lawmakers in the GOP-dominated Legislature changed the layout of SD-9 from an increasingly competitive seat that stretched through diverse areas of Dallas and Tarrant counties to one that sits entirely in whiter and more Republican-leaning areas of Tarrant County.

Bhojani no longer would live in the district where he filed his candidacy. And in a district that gave a 2% margin of victory to Trump in last year’s elections, that margin in the redrawn SD-9 would’ve been 13%.

“It’s frustrating for me as a candidate because I do want to continue that fight,” said Bhojani, a businessperson and lawyer who announced he was ending his Senate campaign earlier this month. “Right now, I have been drawn out.” 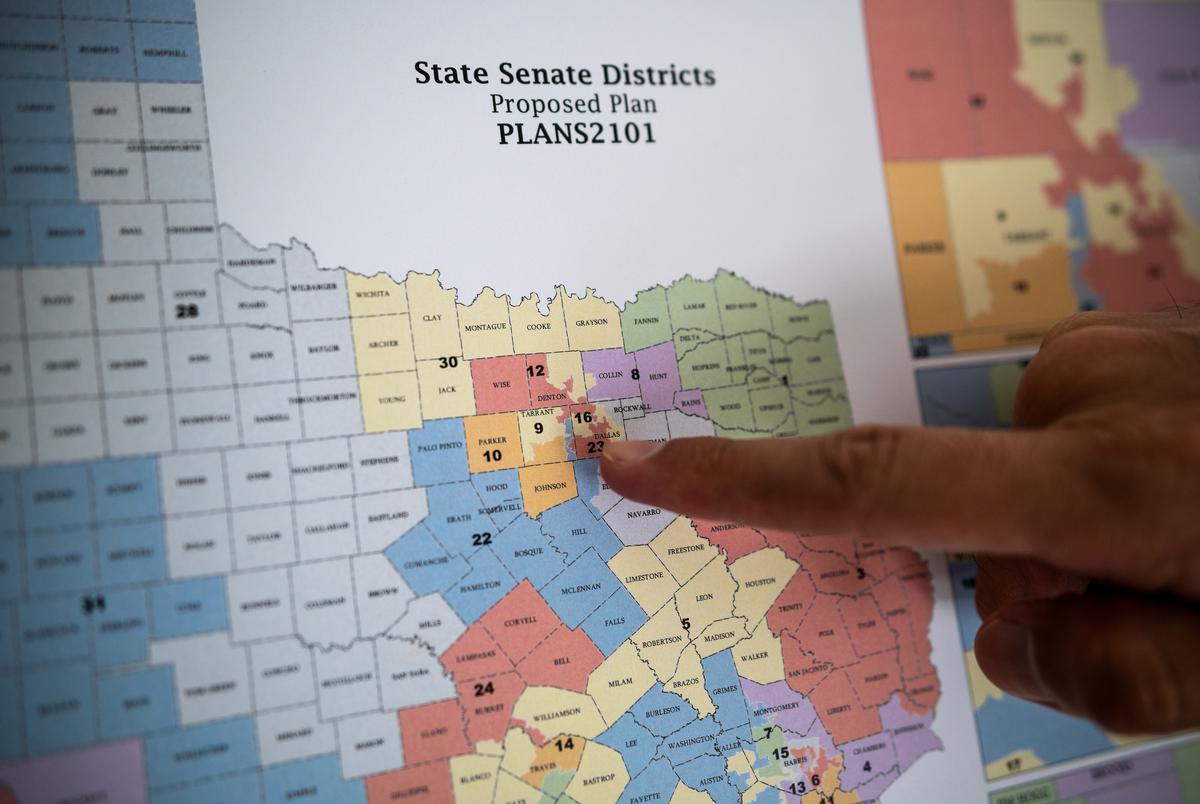 Salman Bhojani, a former candidate for Texas Senate District 9, shows where he lives on an updated map that now draws him out of District 9 and now into District 2, at his offices in Irving, on Oct. 17, 2021. Credit: for the Texas Tribune 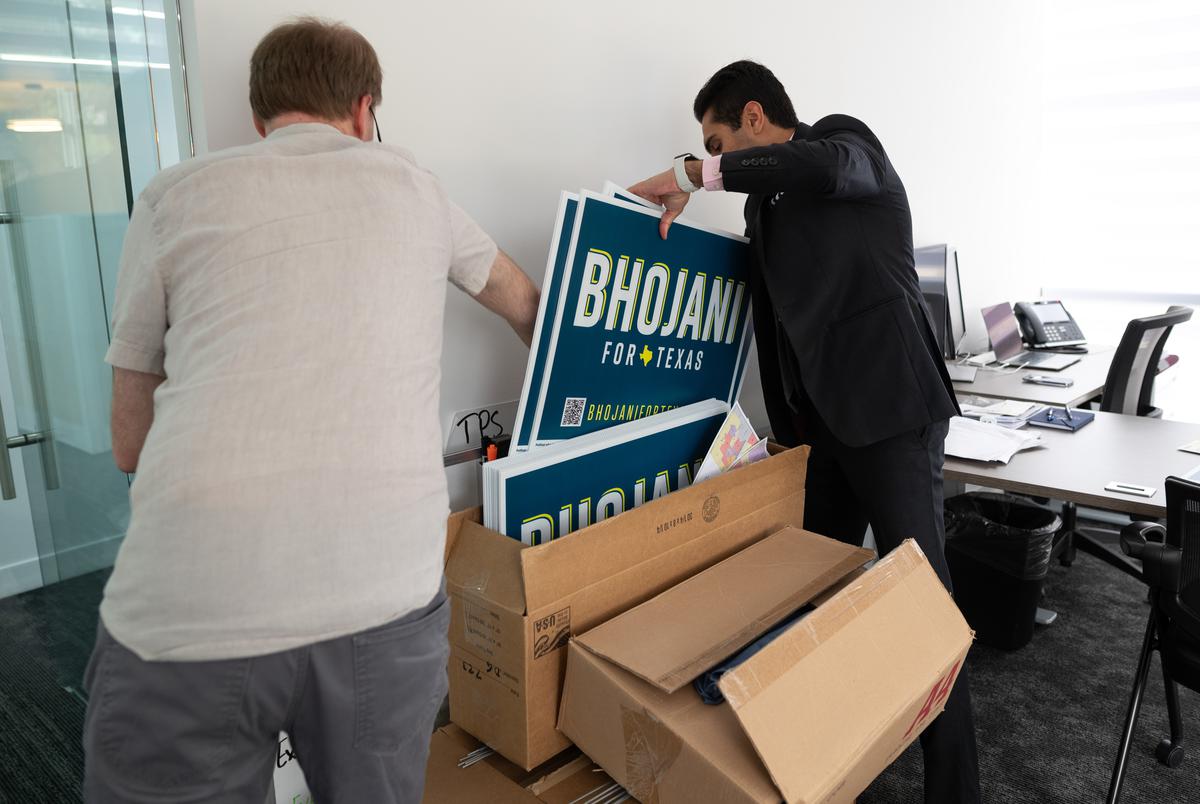 First: Salman Bhojani, a former candidate for Senate District 9, shows where he lives on an updated map that draws him out of SD-9 and into SD-22. Last: Campaign manager Brian Patrick, left, and Bhojani browse through campaign materials at Bhojani’s offices in Irving. Credit: Ben Torres for The Texas Tribune

Bhojani’s story is an example of a common occurrence: Challengers in potentially competitive races like him are frequent casualties during any redistricting cycle as political parties seek to secure their incumbents by drawing them into electorally safe districts.

Thomas Gray, a political science professor at the University of Texas at Dallas, said shoring up incumbents is one of the main goals in any redistricting cycle — and it often comes at the expense of competition.

“In most places, it’s the people currently in office that are responsible for these kinds of things, and they generally don’t want competitive challengers,” he said. “The parties want safe seats more or less.”

At the beginning of the decade, former U.S. Rep. Kenny Marchant, a Republican, won his 2012 reelection campaign with 61% of the vote. But by 2020, U.S. Rep. Beth Van Duyne, the Trump-backed Republican who won the seat after Marchant’s retirement, barely eked out a win against Democrat Candace Valenzuela by little more than 4,500 votes.

Beckley, who had surprised many by flipping Denton-based Texas House District 65 in 2018, is from Carrollton, the same city where Marchant started his political career as a city council member. After two terms in the statehouse, Beckley decided to run for Congress.

“I believe I could have gotten it over the top,” said Beckley, who announced her candidacy in July as she and dozens of other House Democrats basked in the national spotlight after breaking quorum during this year’s first special session in the Legislature and going to Washington, D.C., in an attempt to stop controversial voting restrictions pushed by Republican lawmakers.

But like Bhojani, she cut her run short after the redistricting process. Mapmakers redrew CD-24 to be based farther west, in more Republican areas of Tarrant County, and cut out heavily Hispanic areas of Irving in Dallas County, as well as the Democratic strongholds in Denton County, where her statehouse district is based.

“They’ve drawn me out so my voter base isn’t there,” said Beckley, who suspended her campaign Wednesday “due to the extreme gerrymandering.”

Beckley said she declared her candidacy before the redistricting process started at the Legislature because she wanted to lay the groundwork early for a successful campaign, as she had done when she flipped her statehouse district.

Jennifer Clark, a political scientist at the University of Houston, said that’s a sound strategy for political challengers in regular years, but the redistricting cycle always comes with the risk of producing new maps that change a district’s political circumstances entirely.

“It is a Catch-22 for these candidates who jump in early and find that they’ve been either drawn out or are no longer competitive,” she said. “Some of these plans are incumbency protection plans to protect those districts for those already in office.”

And it doesn’t happen to just one party.

Mayra Flores had worked to build Republican strength in the Democrat-dominated Rio Grande Valley for years.

She’d volunteered for local groups, parties and candidates to push Republican campaigns in South Texas, leaning on appeals to faith and border security. Flores, a Mexican immigrant who became a naturalized U.S. citizen and married a Border Patrol agent, felt her work had paid off after Trump’s good results in the region last year.

“I don’t care if you’re a Democrat or Republican, you should earn your seat,” says Mayra Flores. Credit: Michael Gonzalez/The Texas Tribune

Flores, who’d volunteered for Republican Rey Gonzalez in neighboring Congressional District 34, thought she could compete against U.S. Rep. Filemon Vela, D-Brownsville, next cycle if she started her campaign early. In March, Vela announced he would not seek reelection, further fueling her run.

But when lawmakers redrew congressional districts in South Texas this month, they took six Republican-leaning counties out of CD-34 and put them into Congressional District 27, represented by U.S. Rep. Michael Cloud, R-Victoria. That transformed CD-34 from a competitive district where Biden won the presidency by only 4 percentage points into one in which Biden would have won by 15 percentage points.

Flores is still running but feels the new map put her at a disadvantage.

“Why would anyone do that?” Flores said. “I don’t care if you’re a Democrat or Republican, you should earn your seat.”

But Gray said the political map-drawers often sacrifice potentially competitive districts to pursue safer seats for incumbents on both sides. If incumbents in the minority party get to keep their seats, they’re more likely to go along with a proposed redistricting plan, even if it increases the majority’s dominance.

The proposed congressional map would leave only one district in the state that would have had a margin of less than 5 percentage points in the 2020 presidential elections: CD-15. That means all other incumbents would likely cruise to reelection.

Gonzalez, who is facing a rematch from De La Cruz-Hernandez in that district, has been drawn into CD-34, where he would have a built-in Democratic advantage in a race against Flores.

Clark said research has shown that competitive districts lead to more engaged voters. More money is poured in, which leads to more mailers, TV ads and events in which candidates have direct contact with the communities they seek to represent. All that leads to more news coverage and voters who know more about the candidates.

“When you have a safe seat, it has a demobilizing effect where voters aren’t as engaged in that race,” Clark said. “Voters don’t typically engage in the process. Turnout is typically lower.”

But another way to see safe districts, Gray said, is as political divisions where seat-holders will try their best to make the largest number of voters happy.

“A 50-50 district is the one that will have the highest percentage of people unhappy with the result,” he said. “In [a safer district], more people get to vote in the election that aligns with them.”

That also allows voters to elect candidates who are more conservative or liberal than they otherwise would choose in a more competitive district.

“It’s no surprise that when you identify the progressive members of Congress, they all come from elections in which anyone [representing the Democratic Party] would win that seat. So there’s an opportunity to elect someone who isn’t a carbon copy of a centrist Democrat,” Gray said. “There’s an argument that says these safe seats can also yield these different kinds of candidates.”

Bhojani said the changes aren’t fair to voters of color in SD-9, who will now have their voices watered down in the new, more rural and whiter District 22 where they’ve been drawn.

But while Bhojani’s Senate run was torpedoed by redistricting, he might also benefit. On Wednesday, he announced he would run for House District 92, a newly drawn, Democratic-leaning district that covers parts of Euless.

The district, which had become increasingly competitive in recent years, will go from having a margin of victory for Trump of less than 1% to a 24% margin for Biden.

“I would be the first minority representative the district has ever had,” Bhojani said in his announcement. “This seat has been held for too long by extreme Republicans whose values are a bad fit for us and our families. We deserve real representation in Austin.”

Correction, Oct. 26, 2021: A photo caption in a previous version of this story misspelled the name of Salman Bhojani's campaign manager. He is Brian Patrick, not Brain.