LAREDO — Entering 2022, signs pointed to U.S. Rep. Henry Cuellar being in a better position to fend off a Democratic primary challenge.

Two years prior, the moderate longtime incumbent from Laredo ran a sleepy campaign, and progressive challenger Jessica Cisneros came within 4 percentage points of knocking him off. This year, the most powerful Laredo Democrat anyone can remember has approached a rematch with Cisneros far more engaged, and campaign finance records show he’s spent his sizable war chest on television ads and campaign consultants of every stripe.

But in January, the race took a sudden turn when the FBI raided Cuellar’s home and campaign office. He hasn’t been publicly accused of any wrongdoing, and it’s unclear what agents were seeking. But now Laredo, a city at the southern end of Interstate 35 that’s the center of international trade in Texas, is once again home to a banner nomination contest that could indicate where the Democratic Party is headed.

The raid cast new life into efforts by the party’s progressive wing to unseat Cuellar and raised questions about whether Democrats will be able to hold onto the once-safe seat as Republicans promise to launch an offensive here and in other South Texas contests.

“I do think it jeopardizes Henry’s campaign and victory,” he added. “I really do think Jessica’s campaign prior to that was dead in the water.”

Both campaigns declined requests for interviews with The Texas Tribune. 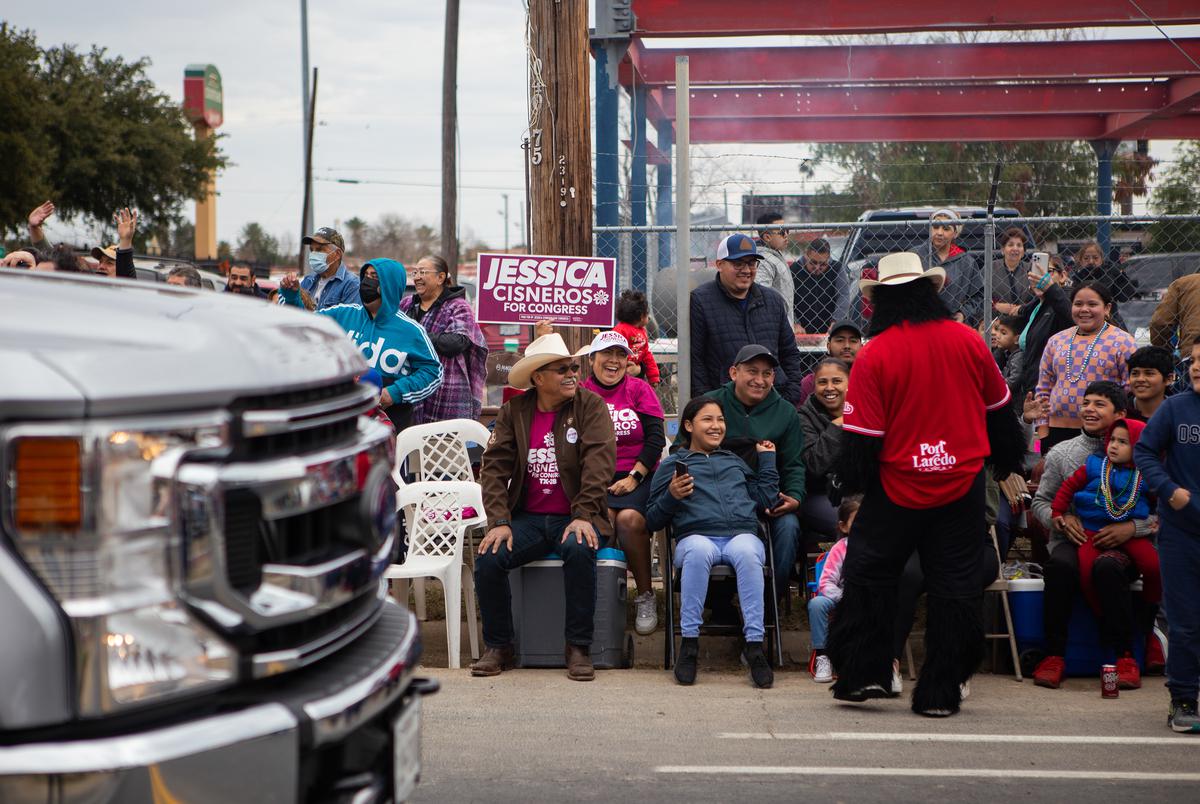 But the political center of the district is Laredo. It’s a distinct Texas city of about a quarter of a million people, having doubled in size over the last 30 years thanks to the 1994 implementation of the North American Free Trade Agreement. It’s also in a region that has become a political hotbed in the past two years. Democrats are still the dominant party, but former President Donald Trump fared surprisingly well there during the 2020 election, raising hopes that the GOP could gain ground along the Texas-Mexico border.

Prior to the FBI raid, the focus on the race was ideological. Cuellar, unlike most Democrats, is opposed to abortion rights and has been quick to criticize President Joe Biden over his immigration security policies. But he touts his bipartisanship and, implicitly, the center of his case to voters is his position on the House Appropriations Committee, where federal spending decisions get made.

Supporters argue that since NAFTA, the city’s infrastructure is in a perpetual need of expansion, particularly the World Trade International Bridge, which links Laredo to Nuevo Laredo across the Rio Grande.

But Cisneros argues on the stump for an increased minimum wage and “Medicare for All,” a national program that would guarantee health insurance for every American, saying that “it’s about time that someone’s out there advocating for those hardworking familias that we have here in South Texas.”

The raid seemed to be a boost for Cisneros and has cast a cloud over the nine-term incumbent. The question is how big the cloud has become.

“It has a negative impact,” Nieto said. “If you were to take a poll today versus a poll pre-FBI raid, I think it would be uninformed to say you aren’t going to have some negative impact.”

But, he added, this is not the first mysterious raid federal law enforcement launched against a public official in the community, and he suggested there is more patience to let the process play out here than in other places.

“I don’t think it’s as earth-shattering an action as you would have in other communities,” he added.

Incumbents in various offices around the country have mixed fortunes when it comes to political survival amid criminal suspicion. It is not unusual for a member to hang on to their office as proceedings drag on, especially if the incumbent has maintained close ties to the district over the years, which is the case with Cuellar.

Cuellar’s name has been on the ballot every election cycle since 1986, as either a state or federal representative, and he is the kind of member who can spontaneously rattle off specific details of obscure pockets of the district.

Even so, Cisneros and her allies are pulverizing Cuellar over the raid. Earlier this month, her campaign released a television advertisement that featured critical news clips about it.

Since the raid, Cuellar has laid low. 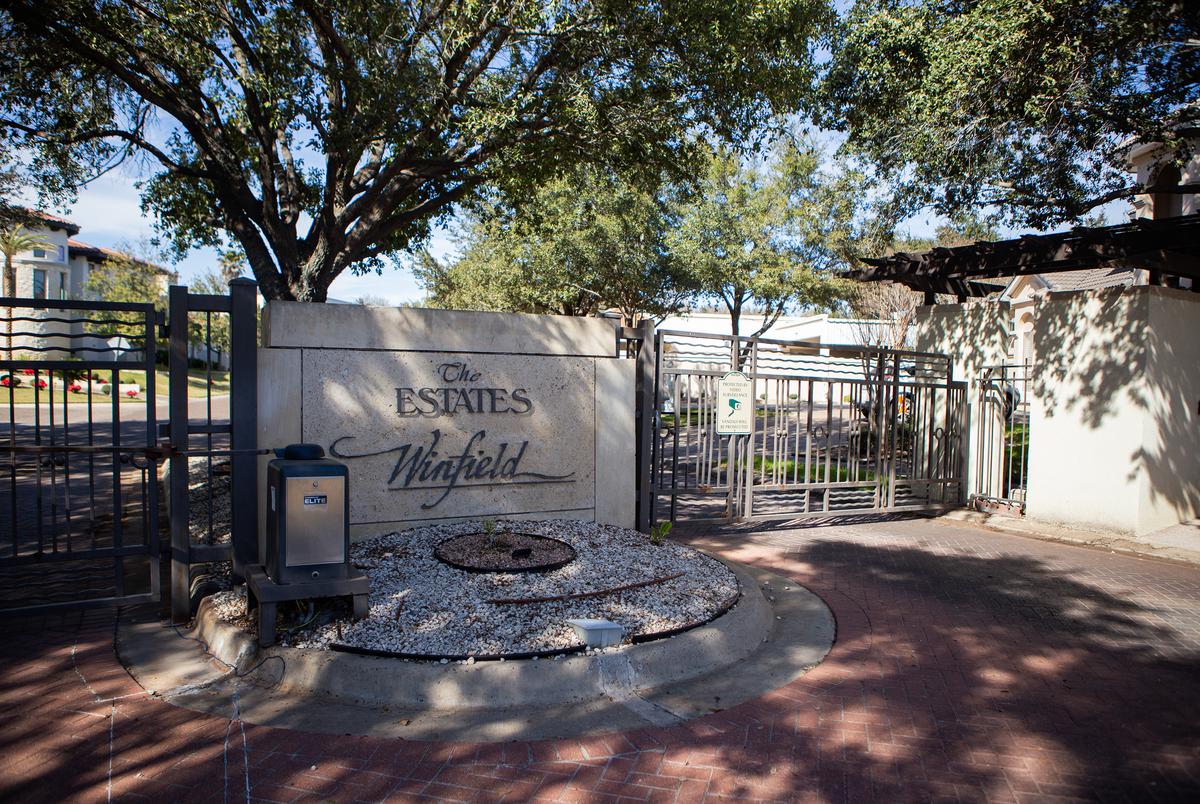 The gated community where Cuellar lives in Laredo. Cuellar has laid low since the raid and has avoided hoards of reporters who would be able to chase him down in the Capitol for uncomfortable questions. Credit: Lauren Witte/The Texas Tribune

Beginning a week before the raid, Cuellar used changes to House voting rules amid COVID-19, known as “proxy voting,” in which a member can delegate a colleague to vote on his or her behalf. In doing so, Cuellar has avoided hoards of reporters who would be able to chase him down in the Capitol for uncomfortable questions.

In Laredo, Cuellar is present but unseen. He abstained from a recent Democratic candidate forum, but people involved in local politics say he is showing up to private events and is leaning hard on old allies to stick with him.

On Saturday, his top adviser released a list of 171 endorsements showing support in every county from mayors, school board members, county officials, district attorneys and local councilmembers.

Nieto and a fellow Cuellar backer, Rafael Tawil Salazar, portrayed the incumbent as closely engaged with the business community and in part responsible for the city’s explosion in economic growth.

“I don’t know exact details of [the raid], so until he’s accused of something particular or convicted, then I just look at my two options,” said another Salazar, who runs several companies tied to trade with Mexico over the river.

“For me, this is the closest thing to a no-brainer in terms of options that I’ve ever had,” he added.

“He has my utmost confidence,” Nieto concurred.

Also, as a House appropriator, Cuellar is a magnet for fundraising. He entered the final stretch of the campaign with $1.3 million to spend.

He used that money to unleash a barrage of ads, including a biographical spot noting his rags-to-political riches life as the son of Mexican farm workers. He has also launched an attack ad against Cisneros, charging, she is “attacking Henry Cuellar to distract from her agenda that will hurt South Texas because she knows her agenda won’t fly here.”

His attack ad, however, rubbed Alvarado the wrong way.

“A lot of his campaigning is bashing her, and I think that’s really crappy,” she said Alvarado after attending a children’s parade during the city’s annual celebration of George Washington’s Birthday.

One of her friends, retail worker Dalila Flores, has yet to decide on whether she will vote for Cisneros, but she is unconvinced with Cuellar’s biographical television pitch, nor does she entertain the argument that he is uniquely able to help Laredo.

“He’s like, ‘Oh, my parents were poor Mexicans, farmers.’ That was so long ago,” she said. “He’s been in a position of power for such a long time. … He hasn’t done anything. He isn’t for the people.”

“The people here, no matter how hard they work, they’re still in the same positions,” she added. “Like, there’s this idea that Latinos will work hard for forever. But I don’t like that idea. I want them to have hobbies and just live, not just to survive.”

“I don’t like Henry Cuellar, if that’s your question,” she added. 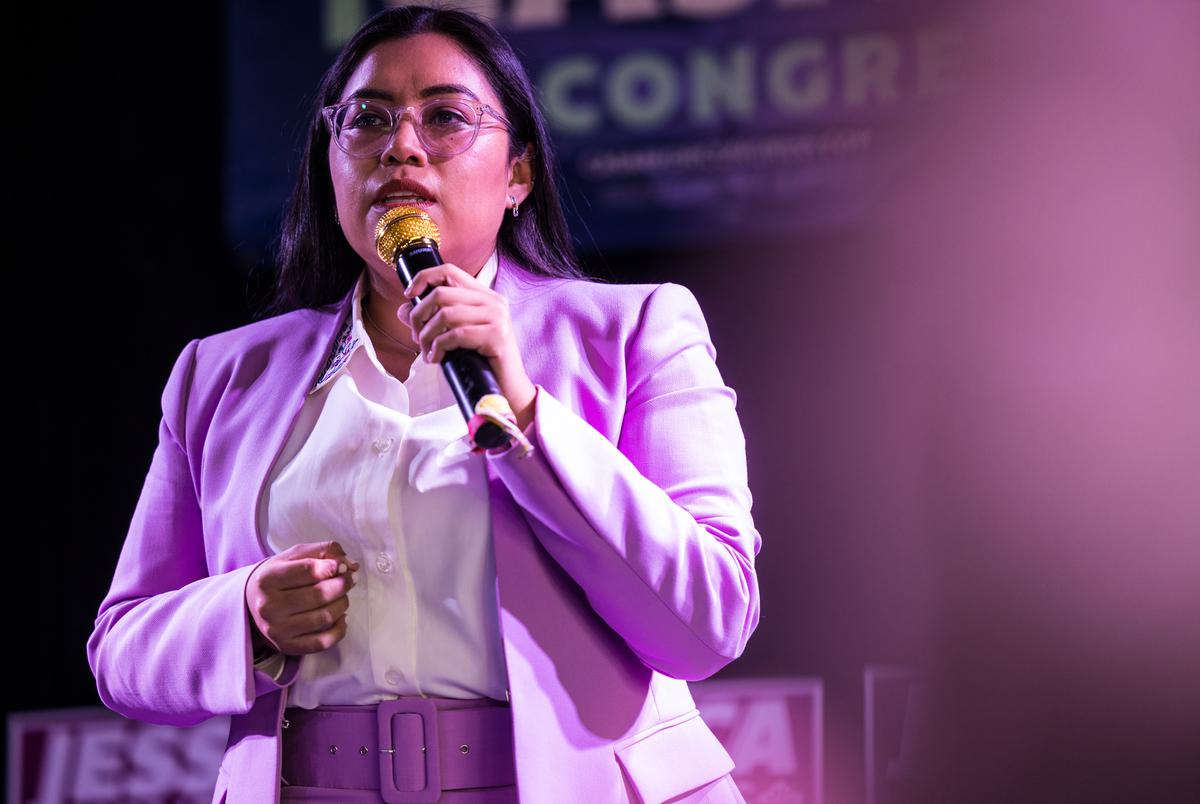 Jessica Cisneros speaks to the crowd at the voting rally event at the Paper Tiger in San Antonio on Feb. 12, 2021. Credit: Chris Stokes for The Texas Tribune

As for Cisneros, she initially struggled in fundraising against Cuellar. Then came the raid.

Typically, in a Texas congressional primary campaign, candidates spend the off-year banking money. Then, in January and February, candidates take the pedal off fundraising and concentrate on spending that money on television advertising, direct mail and get-out-the-vote efforts.

But from the day of the raid until mid-February, Cisneros raised an astonishing $707,000 via hundreds of donations from around the country.

She’s used that money on television and in a mail campaign. In one recent piece, she slammed Cuellar for his abortion record, charging that Cuellar backed Texas state Republicans’ near-total ban of abortion.

“Henry Cuellar is on their side,” the mail piece stated.

It’s a tact that raised eyebrows within the community, due to the Catholic church’s local dominance and its anti-abortion position.

And as a 28-year-old who’s never served in public office, Cuellar allies charge that Cisneros is too young and inexperienced for Congress.

“I believe in meritocracy,” said Nieto, one of the Cuellar allies. “And I do not feel Jessica has earned the right to lead our community. There’s so much at stake.”

“That’s not true,” she said. “She has a more open mind to things, instead of like, Henry Cuellar, who’s set in stone.”

Like Cuellar and the other Democratic candidate, Tannya Benavides, Cisneros grew up in the district and earned both her bachelor’s and law degrees from the University of Texas at Austin. 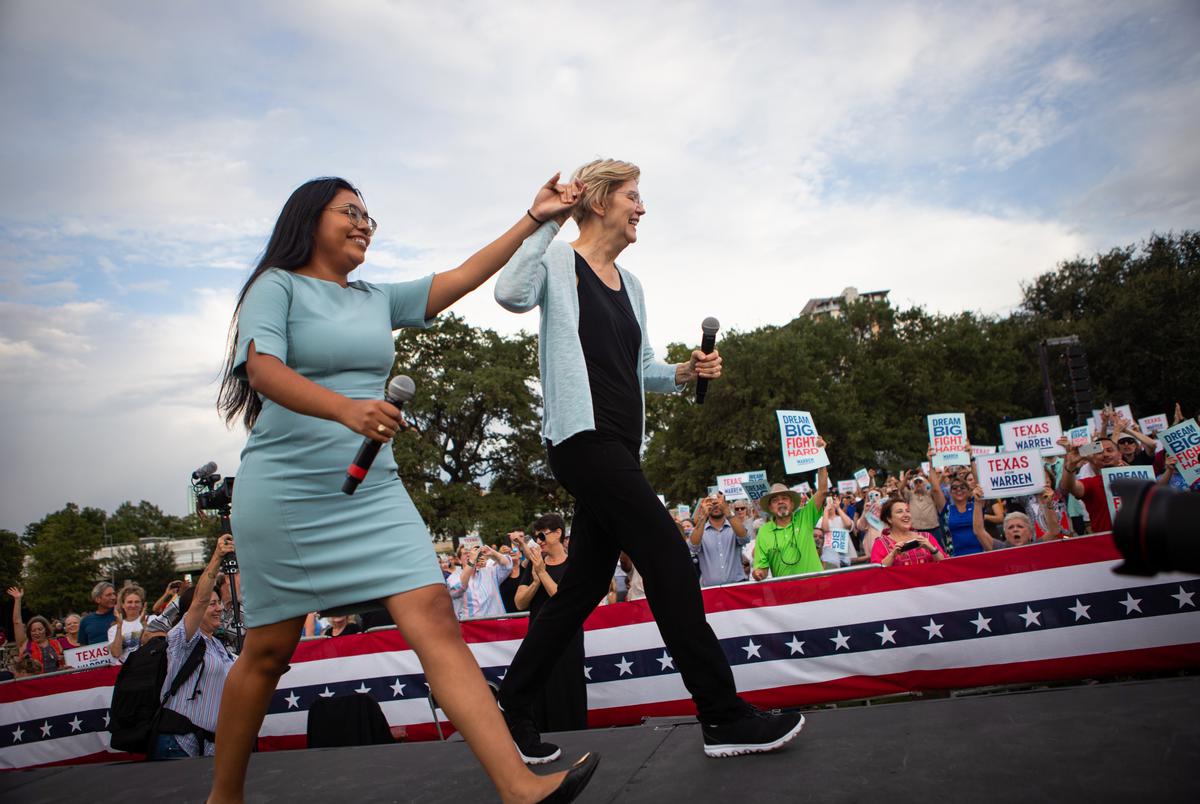 Prominent progressives like U.S. Sens. Bernie Sanders and Elizabeth Warren, who endorsed her two years ago, are back as well. Warren plans to campaign for Cisneros on Tuesday in San Antonio. Cisneros once again also has the backing of EMILY’s List, the influential national group that works to elect Democratic women who support abortion rights, that focuses on helping candidates raise money.

Even though Laredo is her hometown, it is Bexar County that could decide her fate. Three hours to the north, Cisneros ran up a 2-to-1 margin against Cuellar in 2020. That previous version of the map featured 23% of the population within Bexar County and 36% in Webb County.

The newly drawn version of the district features 33% in Bexar County and 35% in Webb County, where Cuellar defeated her by 10 points two years ago.

Beyond the questions about the FBI raid, the other great uncertainty swirling around this race is how much turnout will mirror two years ago. Back then, Cisneros allies Warren and Sanders were still in the running for the Democratic presidential nomination, and it’s presumed Cisneros benefited from the coattails of their turnout operations.

Even if Bexar County is consequential in the 28th Congressional District, Laredo is its heart. A remote city that’s a three-hour drive from any other population center, it has retained its small-town feel, even as its population has grown.

That growth has meant drastic change to the daily lives of those who live here. And Cisneros represents a direct challenge to the city’s entrenched political hierarchy, of which Cuellar and his family sit at the top. 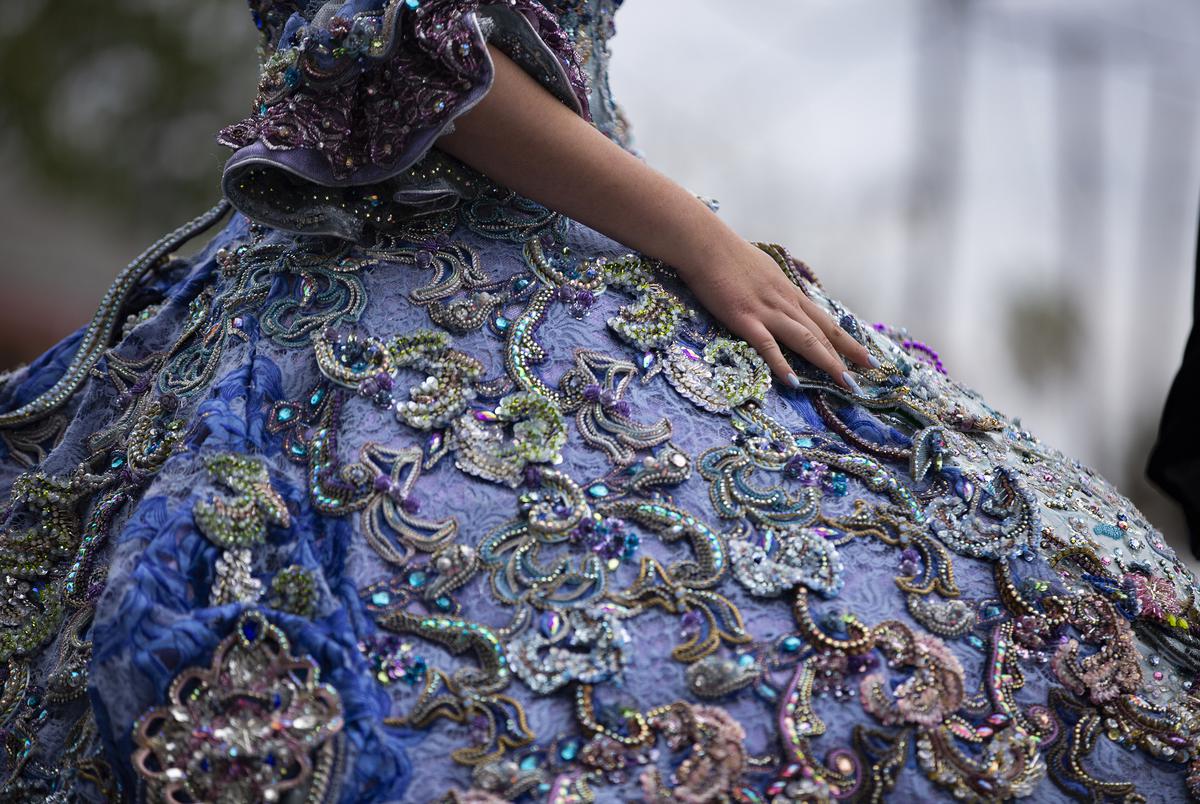 A girl wearing a bejeweled dress for the Society of Martha Washington Colonial Pageant and Ball during the Anheuser-Busch Washington’s Birthday Parade on Feb. 19, 2022. Credit: Lauren Witte/The Texas Tribune 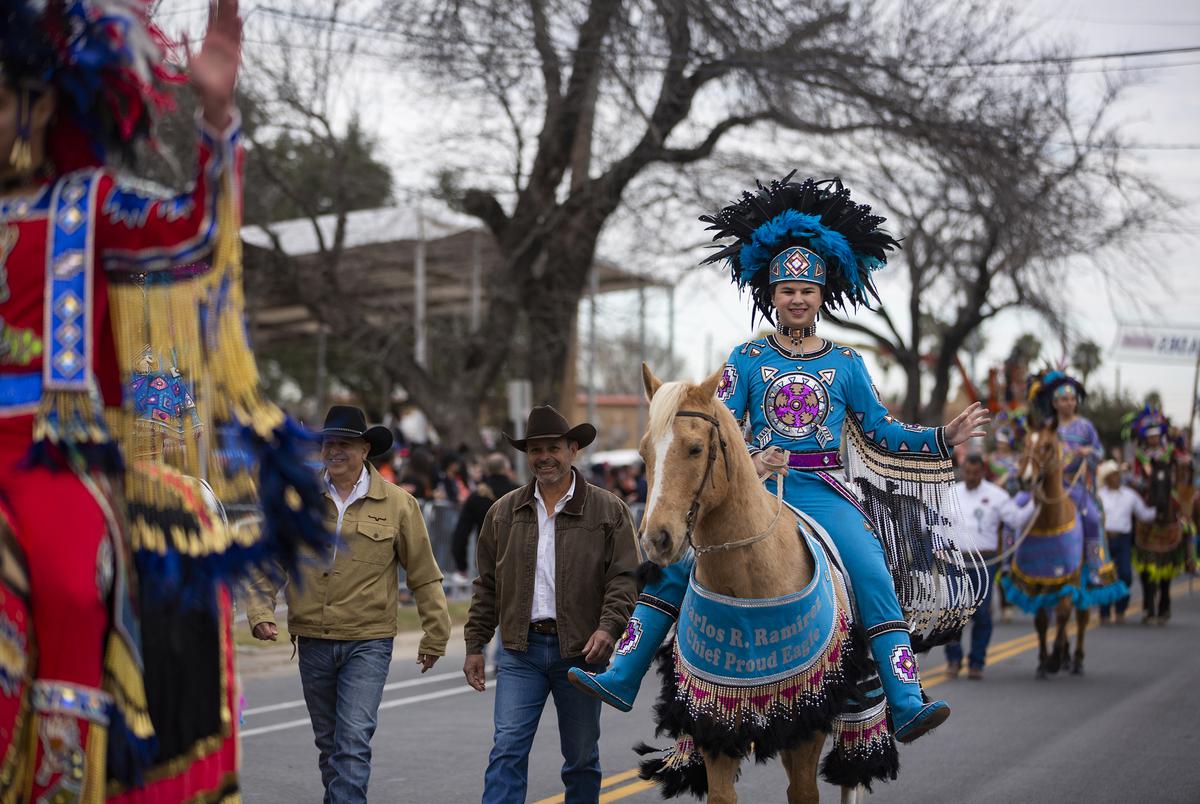 FBI raid or not, Cuellar was always going to be in the political fight of his life, due to the rise of the progressive wing of the party. The local Democratic county chair, Sylvia Bruni, is neutral in the race but is closely watching how this election plays out.

“In a sense, Laredo, possibly, is mirroring what is happening not only across the state but the United States,” she said. “It’s a little bit of a surprise because Laredo has tended to be quiet, very conservative, very traditional.”

Disclosure: The University of Texas at Austin and Texas A&M International University have been financial supporters of The Texas Tribune, a nonprofit, nonpartisan news organization that is funded in part by donations from members, foundations and corporate sponsors. Financial supporters play no role in the Tribune's journalism. Find a complete list of them here.