US Army to conduct military training exercise in San Antonio

A. had an unplanned pregnancy in December. Months before, Senate Bill 8 had gone into effect, banning abortions in Texas as early as six weeks into pregnancy — before many people know they’re pregnant.

A., who had moved to Texas two years ago, agreed to be identified only by her first initial for this story. She said the ordeal that followed “was the most traumatizing thing I’ve been through.” She said the days between finding out she was pregnant and getting an abortion were the “hardest times of my life” because she wanted to get it over with.

When news arrived Friday that the U.S. Supreme Court was overturning Roe v. Wade, opening the door for Texas to ban all abortions, she instantly started crying.

“It just hits really close to me,” A. said. “We all have to deal with it, and they have no idea what circumstances every woman goes through when they have to make that decision. It’s just unbelievable that in one day, like one minute, it’s just overturned.” 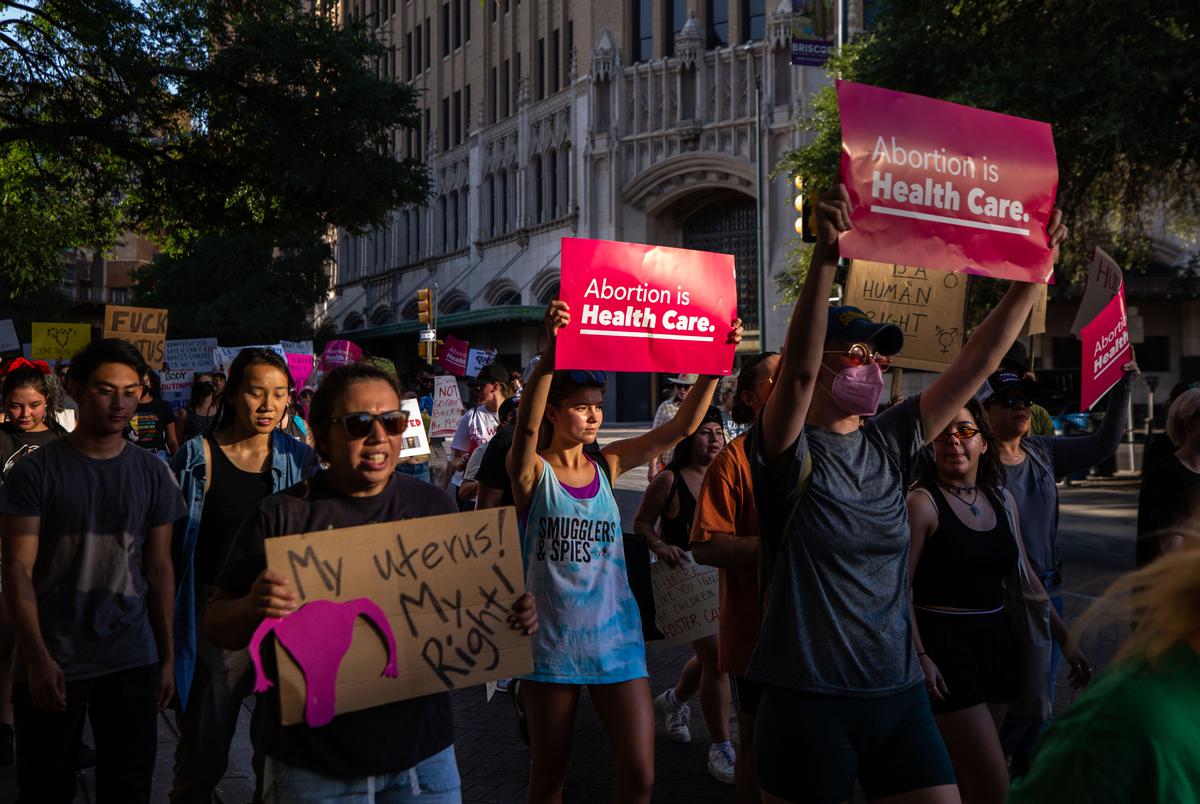 Hundreds of protesters gathered in San Antonio to demonstrate in favor of abortion rights after the Supreme Court overturned Roe v. Wade on Friday. Credit: Kaylee Greenlee Beal for The Texas Tribune 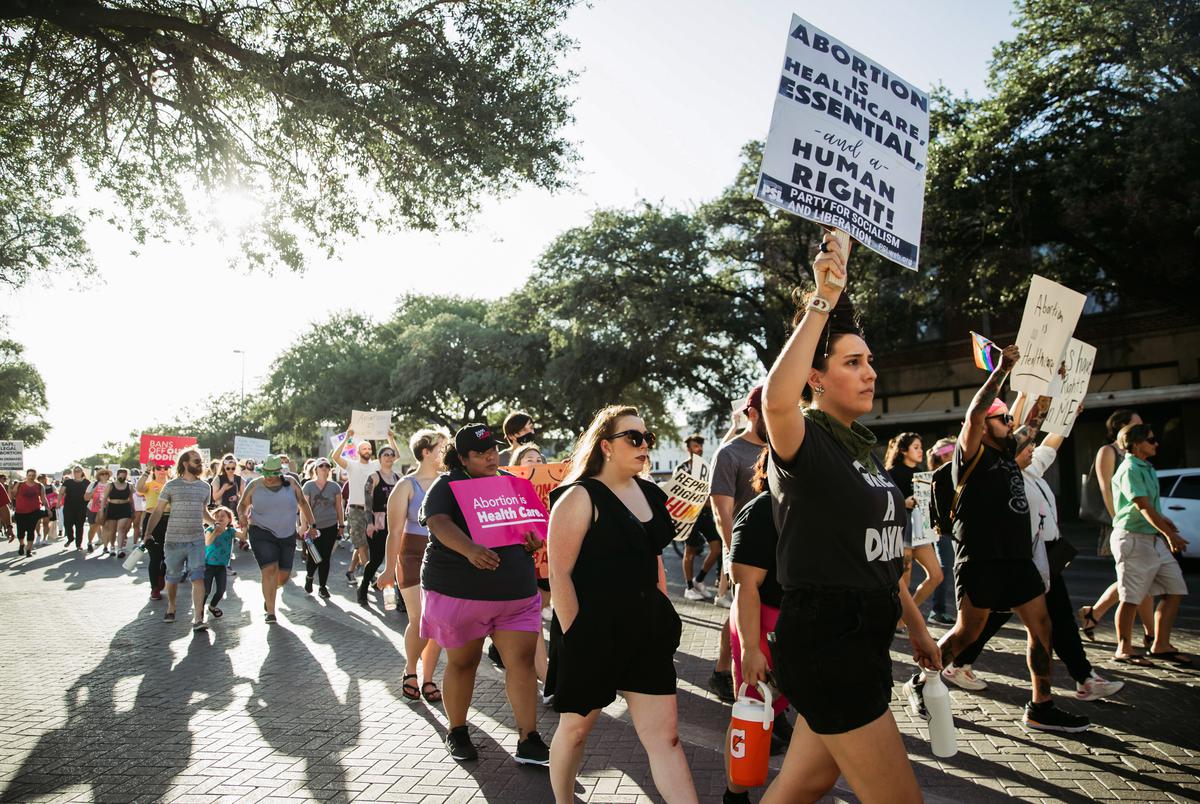 Hundreds of protestors gathered around the Federal Courthouse in San Antonio in favor of abortion rights after the Supreme Court overturned Roe v. Wade on June 24, 2022. The protest was organized by the Mujeres Marcharán Coalition. Credit: Alejandra Sol Casas for The Texas Tribune
Ad 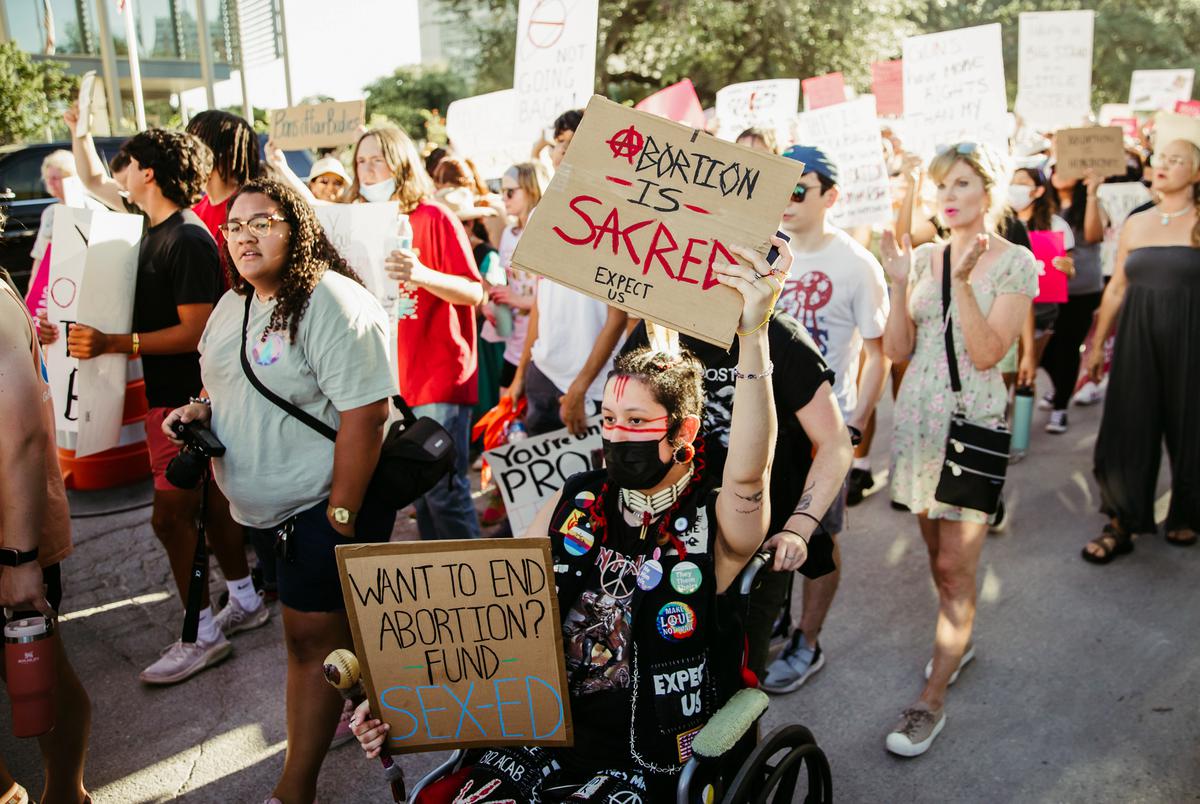 Hundreds of protestors gathered around the Federal Courthouse in San Antonio in favor of abortion rights after the Supreme Court overturned Roe v. Wade on June 24, 2022. The protest was organized by the Mujeres Marcharán Coalition. Credit: Alejandra Sol Casas for The Texas Tribune

Hundreds of people in San Antonio protested the overturning of Roe v. Wade on Friday at a demonstration organized by the Mujeres Marcharán Coalition. Credit: Alejandra Sol Casas for The Texas Tribune

A. joined hundreds of abortion rights demonstrators who gathered in a shady area in front of the federal courthouse Friday in Austin and marched to the state Capitol to denounce the U.S. Supreme Court’s decision to overturn Roe v. Wade. Demonstrators also took part in other rallies in the state.

In Dallas, Celeste Graham marched at the front of a crowd of hundreds of demonstrators hand in hand with her 4-year-old daughter, also named Celeste. She brought her daughter to the rally because she wants her to grow up knowing that what’s happening right now is “not normal.”

The Dallas protesters gathered at the Civic Garden and gave speeches before marching through the streets of downtown. Several demonstrators held signs with messages like “Not your incubator” and “Mind your own uterus.”

Members of five groups that organized the rally led the crowd in chants including “My body my choice” and “We want Roe back.”

As a Black woman, Graham, 30, said she fears for her daughter’s future growing up in a state where she isn’t allowed to have bodily autonomy — especially when the abortion ban disproportionately affects Black women. She said she refuses to sit around and do nothing while her rights and her daughter’s are being taken away.

“These people are not pro-life,” Graham said of the Supreme Court justices who voted in favor of overturning Roe v. Wade. “They are pro-babies until they get here, and as soon as these babies come out and they look like my daughter, if they’re brown or they’re Black or they’re Indigenous or they’re queer, they don’t give a fuck about these babies.”

Crystal Tallo, 37, said she attended the Dallas protest with her 4-year-old son, Edward, so that he can grow up understanding how important it is for every person, not just cisgender men, to have bodily autonomy.

When Tallo found out she was pregnant with her first son, her mother-in-law tried to persuade her to have an abortion. But she said she wanted a child, so she refused to have the abortion, and her son is now 19.

Although she chose to continue her pregnancy, Tallo doesn’t believe all pregnant people should be forced to do so. And as the mother of two sons, she wants to make sure her sons never pressure another person to either keep or get rid of a pregnancy.

“They may have children, and they need to make that choice for themselves,” Tallo said. “My older son knows that if it was up to his grandmother, he would not be here. While I made the right choice that was right for me, I did that because women can be trusted to make the right choices for our families.”

Xochitl Miranda, 28, and their best friend, Raven Delvalle, 25, attended the Dallas rally holding a cloth banner with the words “If you’re pro-life, you’re pro-choice” painted on it.

Miranda said they expected the Supreme Court ruling to rule the way it did but still felt shocked and angry when the news was confirmed. They were taking care of their pregnant cat when they heard the news, which they said felt ironic.

“We treat animals so much nicer than how we treat human beings,” Miranda said. “I could go and get my cat an abortion right now, and it would be perfectly fine. But I can’t, and my friends can’t.”

As abortion rights supporters rallied against the decision, abortion opponents celebrated the Supreme Court’s ruling. They were joined by many of the state’s Republican leaders. In a press release, Gov. Greg Abbott said, “Texas is a pro-life state, and we have taken significant action to protect the sanctity of life.” U.S. Sen. Ted Cruz called the decision “a massive victory for life.” And Attorney General Ken Paxton said he was closing his office and making June 24 an annual holiday.

In Austin, abortion rights supporters held up signs and belted out chants against the U.S. Supreme Court, Texas Republican leadership and a state where they say women’s rights are being infringed upon.

“I know it’s been conversation, but when it happened I feel like I was kind of numb to it,” said Ryan Douglas, a 20-year-old college student from Dallas. “And then it actually hit me, like, what it actually means and then going on social media seeing … it’s gonna affect my children and our children’s children.”

Jocelynn Thurmond, a 24-year-old caseworker for an Austin nonprofit, said she was sitting at home at her desk when news about the decision went out. It was disheartening, she said, but “I’m just like numb to things like this.” 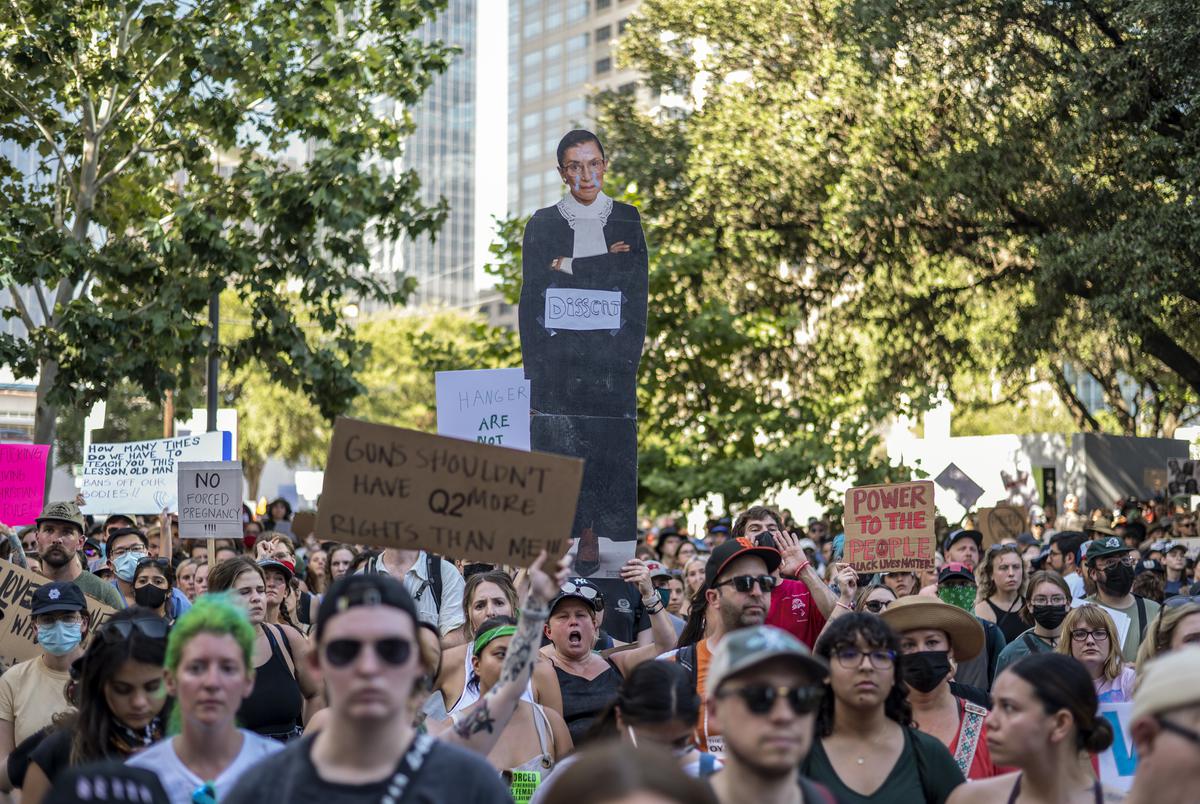 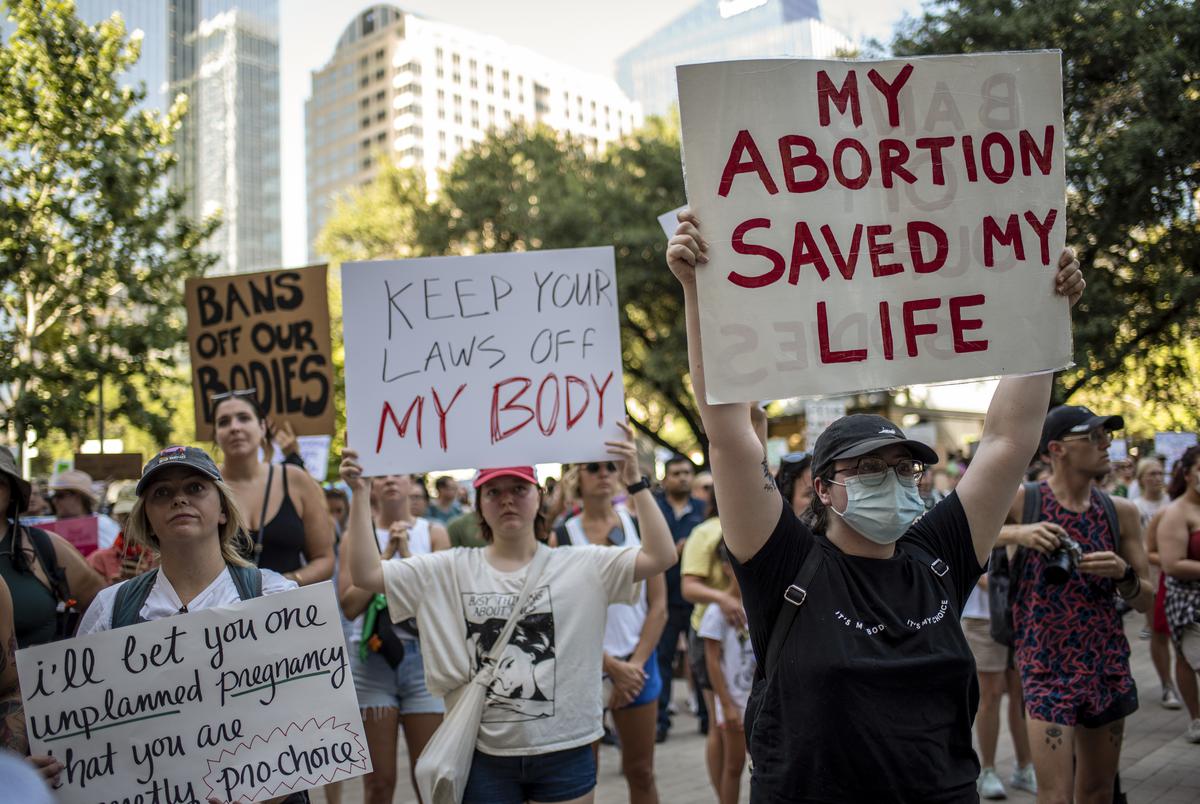 Protesters gather in downtown Austin at a pro-choice rally on June 24, 2022. The Supreme Court overturned Roe v. Wade, leading to national protests in response from pro-choice advocates. The announcement of the overturning would trigger an immediate ban on abortions in several states, including Texas. Credit: Sergio Flores for The Texas Tribune 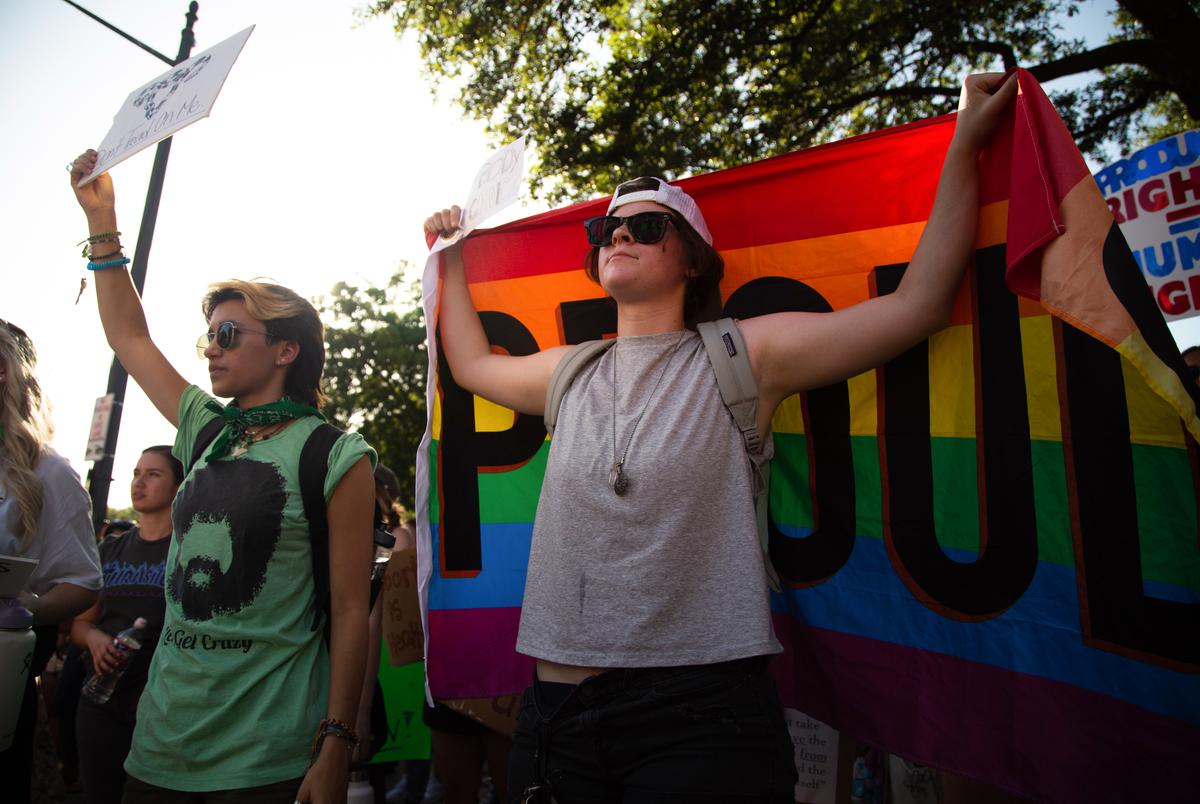 Protesters marched from the federal courthouse to the Texas Capitol in opposition to the Supreme Court's decision to overturn Roe v. Wade on June 24, 2022, in Austin. Credit: Evan L'Roy/The Texas Tribune

“I was at the Black Lives Matter protests in 2020, and so just the fact that we have to say Black Lives Matter,” said Thurmond, who is Black. “And then now we’re saying our rights for our own body matters, it’s just kind of like people really don’t care until it’s affecting them.”

Cassandra and Jaime Chaire, siblings who attended the Austin protest, said living in Texas during a time like this is “scary.”

“I know, with abortions, it doesn’t stop there,” said Cassandra Chaire, who was registering people to vote right before she heard the news. “I’m having to think, like, ‘I’m going to have to plan ahead, and am I going to have access to my [contraceptives] in a month, in a year?’ I don’t know. And so it’s scary because it is directly impactful to me, to every woman in Texas.”

“I would say that hearing from others and people stating that this is the greatest country in the world,” Jaime Chaire added, “we should definitely look inside and see all the issues that we’re currently having and challenge ourselves to actually be better and put some actions into the words that we’re saying. ”

Sydney Tran, a 20-year-old student at the University of Texas at Dallas, said the decision to overturn Roe v. Wade has made her think about whether living in Texas long term is the right thing to do. Tran said that in light of the decision, she’s “definitely” going to be voting in the November midterm election.

“I feel like that’s the only thing I can do,” Tran said while attending the Austin rally. “But I’m definitely thinking about my next steps and whether I do want to consider having a family here in the future.”

In Dallas, Miranda said they hope to see more people continue to protest the abortion ban and show solidarity, even when it may seem like the protests don't accomplish immediate change.

“If you just reach one or two people who wouldn’t have seen that, then maybe next time they’re going to have enough bravery to stand up, too,” Miranda said. “It just takes inspiring one or two people by showing that you’re not scared.”

Disclosure: The University of Texas at Dallas has been a financial supporter of The Texas Tribune, a nonprofit, nonpartisan news organization that is funded in part by donations from members, foundations and corporate sponsors. Financial supporters play no role in the Tribune's journalism. Find a complete list of them here.