The Texas Supreme Court on Tuesday set the stage for a legal fight over whether to count ballots Harris County voters cast during an extended hour of voting ordered by a lower court.

That lower court ordered that the state’s most populous county extend voting hours until 8 p.m. after several polling places were delayed in opening. The state’s highest civil court blocked that ruling and ordered Harris County to separate ballots cast by voters who were not in line by 7 p.m., the normal cutoff for voting in Texas. The Supreme Court’s order followed a request by Texas Attorney General Ken Paxton to reverse the lower court’s order. The Supreme Court posted the order on Twitter at 8:30 p.m.

[Election results: How Texas voted in the November 2022 midterms]

It’s unclear how many votes were cast during the extra hour of voting, but Harris County Attorney Christian Menefee raised the prospect that the state would ask for those votes to be thrown out. The attorney general’s office did not immediately respond to a request for comment on whether they would pursue such action.

Voters who got in line after 7 p.m. were required to cast a provisional ballot, which the county had already said would take more time to process and would not be initially counted in election night returns. Harris County is home to nearly 2.6 million registered voters.

The order to keep polls open an extra hour at nearly 800 polling places came after the Texas Organizing Project sued Harris County, citing issues at numerous polling locations that opened more than one hour late Tuesday. Many Harris County voting locations also experienced voting machine malfunctions that caused delays and temporary closures throughout the day, the lawsuit claimed. The county did not fight the request for extra voting time.

“We didn’t oppose the original relief because we want to make sure every single eligible voter in Harris County has the chance to cast their ballot, and there were polling places that had some issues,” Menefee said. “But the Supreme Court of Texas will decide what happens here.”

In its request for extra voting time, the Texas Organizing Project argued the delayed openings violated the Texas Election Code because polling locations that opened after 7 a.m. would not remain open to voters for 12 hours. State law says polls must be open from 7 a.m. to 7 p.m.

In a court motion filed earlier Tuesday, the attorney general’s office argued that a county’s failure to open polls at 7 a.m. does not justify ordering them to remain open past 7 p.m.

Harris County has been forced to extend voting hours in the past for failure to open on time. In 2018, a judge similarly ordered the county to keep nine polling locations open for an extra hour. 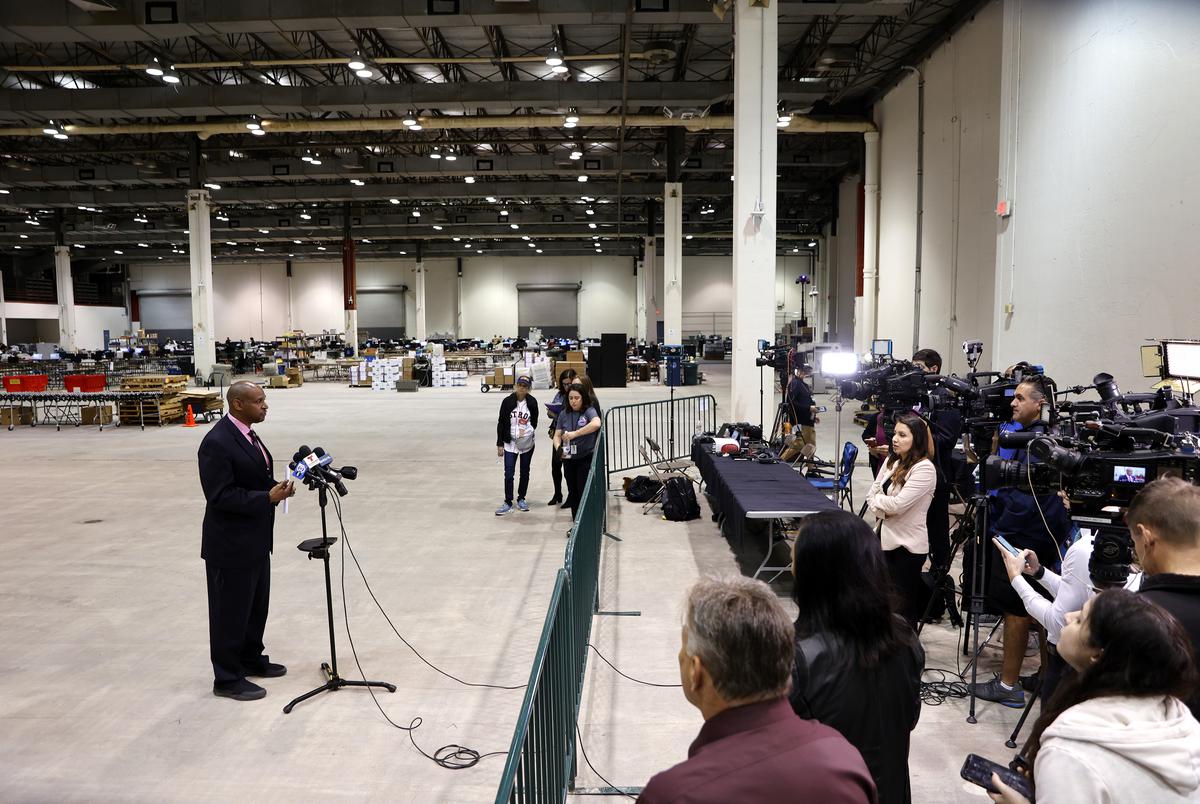 Harris County Elections Administrator Clifford Tatum announced to the media at the NRG Arena that voting will be extended an hour later to 8 p.m. on Tuesday night, Nov. 8, 2022. Tatum added that votes cast after 7 p.m. will be provisional and take longer to count. Credit: Michael Stravato for The Texas Tribune

“We went to court because these closures and errors, especially in communities of color across Harris County, robbed voters of the opportunity to cast their ballot,” said Hani Mirza, the voting rights program director at the Texas Civil Rights Project, which filed the lawsuit. “These folks got to the polls early, wanting to do their civic duty, and they would have were it not for these issues.”

Earlier in the day, a state district judge also ordered polling places to remain open an extra hour in Bell County in Central Texas. It is unclear if the attorney general’s office is also challenging that extension.

Harris County has regularly come under the scrutiny of Texas Republicans in the last few election cycles. The county was at the center of sweeping Republican legislation passed in 2021 to further restrict the state’s voting process and narrow local control of elections. That new law, known as Senate Bill 1, banned methods championed by Harris County in the first major election during the pandemic — 24-hour voting and drive-thru voting, both of which were disproportionately used by voters of color.

The Harris County GOP has been at loggerheads with the county’s Democratic leadership since losing political control of the county and the county clerk’s office, which oversaw elections until the recent creation of an elections administrator office. That has included partisan battles over voting initiatives like a move to countywide voting that allows voters to cast ballots at any polling place in the county on election day.

As of about 10:45 p.m., Harris County election officials were a long way off from finalizing the number of provisional ballots affected by the Texas Supreme Court’s order. Hundreds of polling places had yet to deliver any ballots and election materials to the county’s election night headquarters where votes were being tabulated.

The outcomes of some local races could be delayed, depending on how close the political contests are and how many provisional ballots end up in limbo.

Robert Downen contributed to this report.

The Texas Tribune is a nonprofit statewide news organization dedicated to keeping Texans informed on politics and policy issues that impact their communities. This election season, Texans around the state will turn to The Texas Tribune for the information they need on voting, election results, analysis of key races and more. Get the latest.