INSIDE THE RING: “El Azteca” returns to San Antonio

BRACKETTVILLE — After spending eight months in a Texas prison, Lester Hidalgo Aguilar walked into a small-town community center near the United States-Mexico border on Monday and waited for his trial to begin.

Sitting in a vast, warehouse-like chamber, he listened for hours as a team of attorneys winnowed down a jury pool of about 75 local residents to six. After a lunch break, Aguilar, the jury and a swarm of county employees and attorneys from across the state moved into the local courthouse to hold trial.

The court proceeding was a big event in this 1,600-person town in Kinney County, a rural border region about 100 miles west of San Antonio. With the popular local restaurant closed, a gas station clerk had to step behind the counter of the Subway during the courthouse lunch rush to help an overwhelmed employee whose coworkers were part of the jury pool.

In another time or place, such a spectacle wouldn’t be thought of for a case like Aguilar’s. After all, the 39-year-old was accused only of a misdemeanor: trespassing on private ranch land.

But this case was unique among trespassing charges. Aguilar was the first migrant to stand trial in Gov. Greg Abbott’s “catch-and-jail” initiative under Operation Lone Star, a multibillion dollar border security crackdown launched last March in response to a sharp rise in illegal immigration.

In an attempt to deter border crossings, state police have arrested more than 3,000 men in Kinney County on trespassing charges since July. The county accounts for the vast majority of Operation Lone Star’s trespassing arrests, with migrants typically picked up on its many hunting ranches or at a remote railyard.

The mass arrests, funneled through the court system of a town used to handling a few dozen misdemeanors a year, caused a litany of problems. Errors and delays by the local prosecutor and judge have led to illegal detentions, and the trespassing initiative has led to constitutional challenges in both state and federal courts. Other pieces of Operation Lone Star have also faced criticism from Republicans and Democrats alike over deaths of Texas National Guard members and its ever-increasing price tag.

With the operation’s increasing backlash, as well as continuously rising levels of immigration, securing a conviction out of the first jury trial for the trespassing arrests wasn’t necessarily about Aguilar. It was a win the state and the county needed.

Out of Kinney County’s more than 3,100 reported trespassing arrests through April, 860 men have pleaded guilty, typically after spending weeks or months in prison before their first court appearance. But Aguilar’s was the first trespassing case to go to trial, and the county wasn’t taking any chances.

A large swath of local residents were called in to find six jurors. Three prosecutors sat on the bench at trial, and a fourth often stood up from the first row of public seating to whisper into their ears. And the case was heard by the area’s felony-level judge, not the Kinney County judge, who typically handles misdemeanor cases. 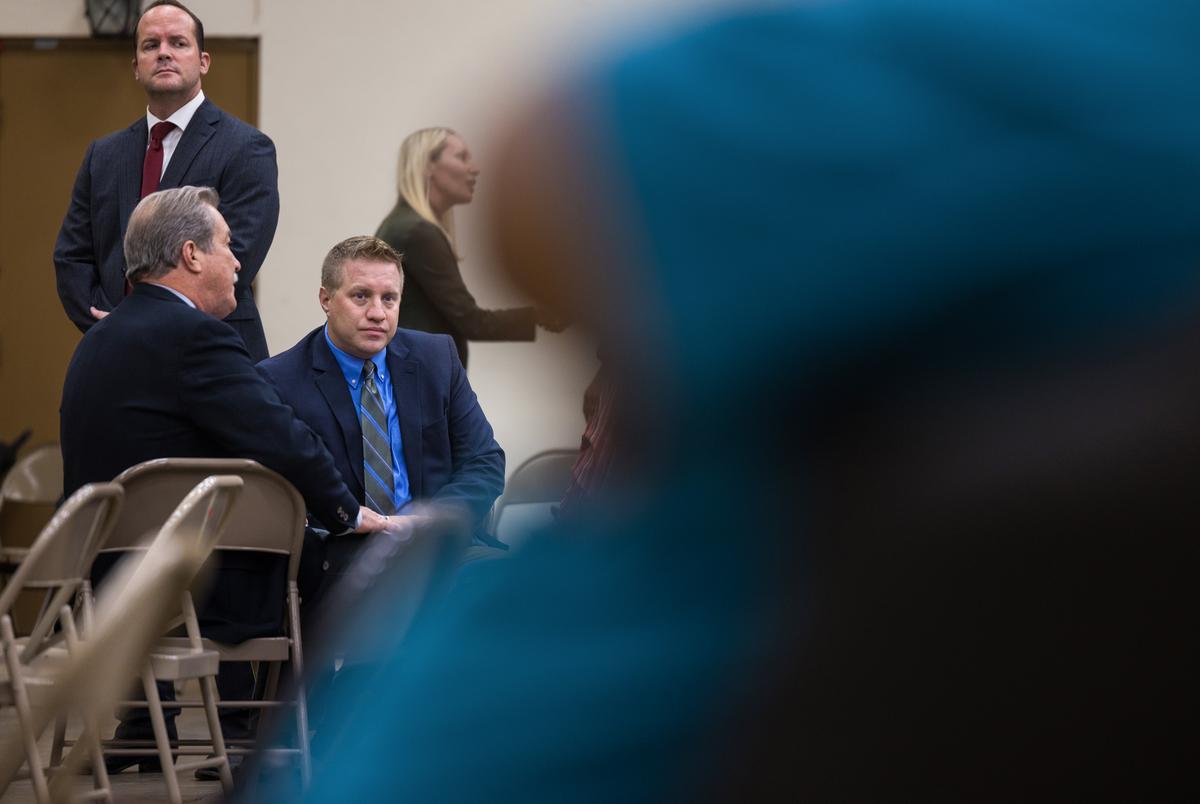 Aguilar was arrested in September about 15 miles from the Texas-Mexico border. U.S. Border Patrol agents spotted him and more than a dozen other men walking in the remote ranch land and called in the Texas Department of Public Safety to arrest the men under their new trespassing enforcement orders, according to the arrest report.

“I don’t think I ever have been as impassioned about trying a case in a long time,” Tony Hackebeil, a San Antonio attorney who led the prosecution for Kinney County, told jurors about the low-level charge Monday.

“Send that message,” he added. “Send the message to not just your community that you agree this should not be allowed to happen. But send a message as loud as you can to all of those people who are continually doing this. We just happened to pick Lester Hidalgo Aguilar.”

Aguilar’s court-appointed defense attorney, Bryan Owens, pressed the jury to remember the migrant’s case was not about immigration laws or border enforcement.

“A guilty verdict is not going to deter even one person from trying to cross the border,” the attorney said.

This case was only about Aguilar trespassing, he argued, and the state couldn’t prove Aguilar had breached a fence to enter private property. Owen also pointed out that the woman pressing charges was not the landowner, but the landowner’s sister.

Still, six jurors, all of whom had Spanish surnames, found Aguilar guilty of trespassing on a fenced ranch land Monday evening after deliberating for less than 20 minutes. 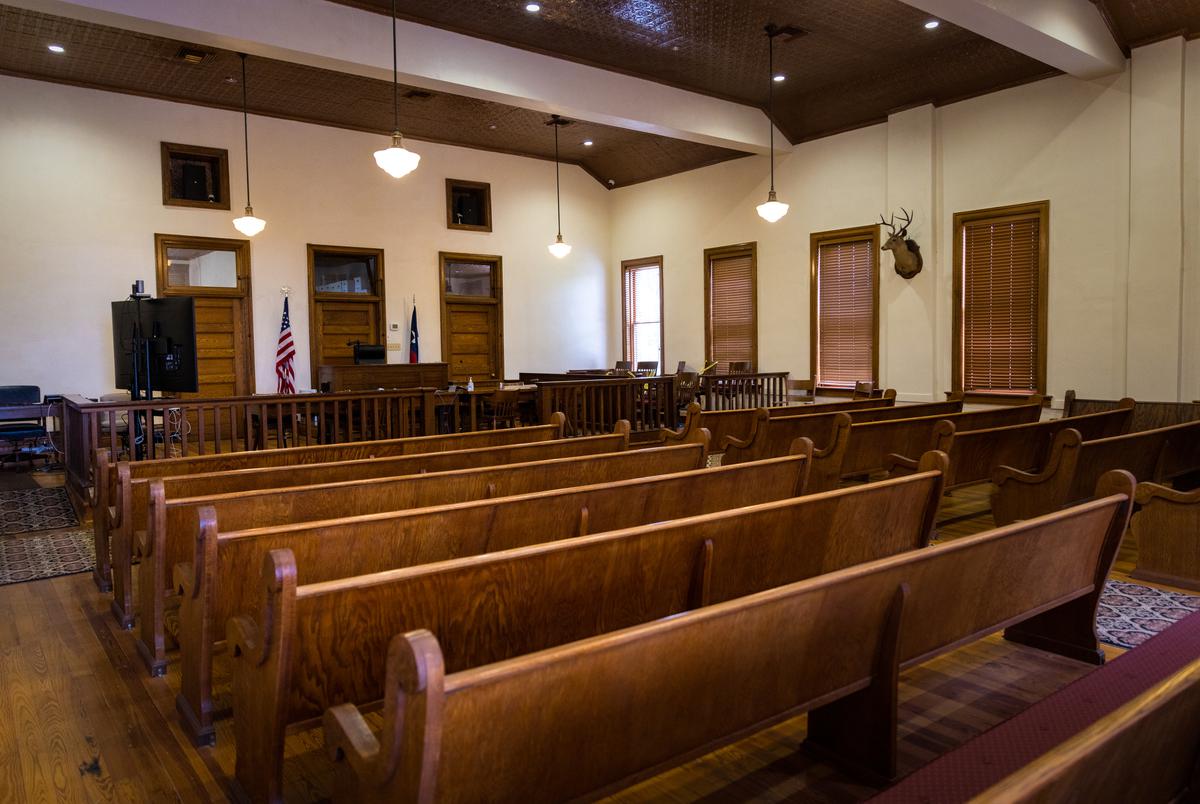 The Kinney County Courthouse in Brackettville before Aguilar's trial. Credit: Chris Stokes for The Texas Tribune

During jury selection Monday morning, the most vocal residents made clear they were sick of an increase in migrants crossing their properties. Some told attorneys their fences had been cut or gates left open, letting their livestock out. One woman reported her sister’s house had been broken into. A man said his cattle were killed. And a handful expressed a general dislike of “illegals.”

After the jury was discharged, the Honduran national told the court that he was brought to the United States by his family when he was 6 and was raised in Florida. After a stint in jail in his early 20s, he said he was given the choice of voluntarily going back to Honduras or extended probation, and he left.

There, Aguilar said, he became a family man, eventually fathering five children. But he was forced to flee from political persecution about five years ago, he said, and sought asylum in Mexico. He was trying to stay in Mexico five years to gain citizenship so he could more easily apply for a visa into the United States, he said. But he fled to Texas after four years because he said he was being targeted by cartels.

While the judge weighed an appropriate jail sentence for his conviction, Aguliar showed what he said was a machete-inflicted scar on his forehead. He raised his hands to reveal only nine fingers, explaining his pinky was taken when he was kidnapped and tortured by cartel operatives.

State District Judge Roland Andrade gave Aguilar the maximum punishment for trespassing: a year in jail. But, against the wishes of the three prosecutors on the bench, Andrade declined to issue an accompanying fine, the maximum of which would be $4,000.

By Monday, Aguilar had already served about eight months of that jail sentence in the two state prisons Abbott cleared out to make room for Operation Lone Star arrestees. The migrant had remained in jail before trial, unable to post $1,500 in cash to bond out.

But it was not immediately clear how much longer Aguilar will actually serve. Many counties offer good time credit for misdemeanor jail sentences. In Kinney County, inmates are given a credit of three days for every one that is served, essentially turning a year sentence into four months in jail. But the sheriff was unsure how that would transfer to migrant detainees, as they are held in state prisons, not his jail.

Whenever Aguilar is released, Owens assured the court the end result will be the same. After a costly imprisonment and extensive trial procedure, he said the Honduran migrant will be deported.