5 warnings in effect for 3 counties in the area

Have you seen this man? Police say he robbed a Subway restaurant on West Side

SAN ANTONIO – The slaying of 14 people at a social services office in San Bernardino, Calif. on Wednesday -- less than a week after the deaths of three people at a Planned Parenthood office in Colorado Springs, Colo. -- once again has rattled America and highlights the discussion of gun violence in America.

Though Wednesday’s shooting took place on the West Coast, Texas is no stranger to mass shootings.

Stanford University's Mass Shootings in America (MSA) database, a resource of shootings indexed from online reports, found a total of 13 instances where at least four victims were killed during one attack in Texas since 1966. In all, the index totaled 218 people who were killed or seriously injured in those incidents.

One mass shooting that rocked San Antonio, even though the tragedy struck more than 900 miles away, took place in the town of Aurora, Colo., in 2012, where San Antonio native Jessica Ghawi was watching a midnight showing of The Dark Knight Rises. Shooter James Holmes burst into the dark theater, killed 12 people and injured dozens more. 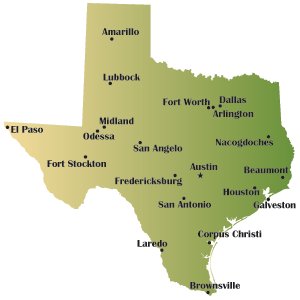 On the two-year anniversary of the shooting, Ghawi’s parents told KSAT that they have not stopped working their fight for tighter gun control laws.

"Right after Jessi was killed, literally the next day, my husband and I knew that we were going to be getting involved in this issue somehow," Sandy Phillips said. "We know that background checks work. We know that it's stopped over 2 million people who shouldn't be able to buy guns -- felons, domestic abusers, etc. We know it's stopped them, so we know that if we expand those background checks, to online sales and private sales, it's going to save lives.”

The statistics in Texas as shown by the Stanford University MSA index revealed that of the 13 instances, the most time between two of the shootings was almost 20 years. That was between the shooting at the University of Texas at Austin in 1966, when a 25-year-old student climbed up to the university clock tower and fatally shot 16 people below, to the next mass shooting in 1984, when a 39-year-old man killed six people and seriously wounded a seventh.

The MSA showed four mass shooting in Texas in the 1990s. Since 2013, there has been at least one mass shooting in the state every year to date. On days of the week, Wednesday was the day with the most shootings at four. Monday, Thursday and Friday each had two shootings a piece.

According to ProCon.org, a website that explores the pros and cons of controversial issues, the United States has 88 guns for every 100 people. That’s 270 million guns in the United States, the highest per capita in the world.

The story showed that some of the states with tighter gun laws, like California, Connecticut, New Jersey, New York and Massachusetts, also had the fewest deaths.

"Correlation does not mean causation, of course, but that’s not where the debate ends," Kirk wrote. "We can’t start a society in a vacuum and tweak the gun control laws to see what happens; we can only rely on messy real-world data. Other studies have shown that states with more guns have more suicide and homicide; that suicides (which account for about three-fifths of gun deaths) decrease when gun control is tightened; and that countries with more guns have more homicide."

While some argue Texas gun laws should be more comprehensive, other states like California already have some of the strictest policies on gun control. For example, a firearm safety certificate -- obtained by passing a written test -- is required for purchasing a gun. Handguns for sale also must be listed on the state’s Roster of Handguns Certified for Sale.

According to the MSA database, a comparison between the two states showed that California had three fewer total number of shooting victims than Texas -- 160 to 163 -- since 1989. That’s when California passed a law making it illegal to possess, import or purchase an assault weapon and .50-caliber MMG rifles, unless the weapons were acquired by the owner before June 1, 1989.

Most of the guns used in the California shootings were not assault weapons, either. The MSA index detailed the type of gun used in the instances since 1989, ranging from handguns, shotguns and rifles to pistols and sniper rifles. In the cases where an assault weapon was used, the type included an AK-47-type 7.62mm semi-automatic assault rifle, a .223 semi-automatic rifle, and an AR-15-style weapon.

The database did not show that any of the shooting events in Texas where an assault weapon was used. In specific cases like the shooting spree at Fort Hood, the shooter, Nidal Hasan, used an arsenal of weapons that included an FN Herstal 5.7 tactical pistol equipped with a 20-round ammunition magazine, a handgun, a revolver and two gunsights used for varying lighting conditions. The report stated that Hasan carried 177 rounds in 30-round and 20-round large-capacity ammunition magazines.

The comparison in this example showed that the stricter gun laws didn't make a major difference in the number of lives saved.

(Editor's note: This is a developing story with more information forthcoming on comparisons and statistics related to gun violence.)