4 advisories in effect for 33 regions in the area

4 advisories in effect for 33 regions in the area

Two men shot, injured while skating at park on North Side, SAPD says

Texans protested in Houston on Friday night, spurred by the death of a Minneapolis man who had been a longtime resident of the city's Third Ward.

George Floyd, who was black, died in Minneapolis police custody Monday after a white officer kneeled on his neck long past the point when he lost consciousness, according to court documents. That officer, Derek Chauvin, was arrested Friday and charged with third-degree murder and manslaughter.

Similar protests erupted in other Texas cities Friday, including Dallas and Fort Worth.

“It should not have happened,” Abbott said. “Obviously, from everything I have seen, this is a consequence of poor police work.”

Photographer Pu Ying Huang was in Houston on Friday to document the scene, which at one point included police officers using tear gas to disperse crowds, according to the Houston Chronicle. 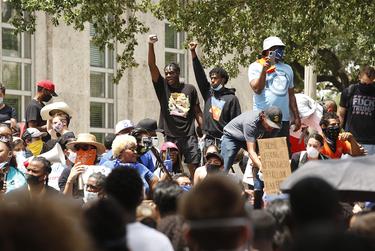 Protesters gathered Friday at Houston City Hall in memory of George Floyd, a black man who was killed during an arrest by a white police officer in Minneapolis. Pu Ying Huang for The Texas Tribune

First: Alea Rolison wore a mask that read, "I can't breathe,” at a Houston rally. Last: Protestors marched at a rally for George Floyd in Houston.