Map: Where Proposition B drew support, opposition in San Antonio

Map: Where Proposition B drew support, opposition in San Antonio

Where candidates in June 5 runoff election stand on policing, homelessness and cleaning up San Antonio

Published: February 11, 2020 12:01 am
Tags:
Politics
No Texas politician has a fiercely loyal following quite like Beto O’Rourke’s. But his detractors say his star has fallen. Michael Stravato for The Texas Tribune

In 2018, Jacqueline Westman fell in love with her first political candidate.

It was Beto O’Rourke, then a no-name congressman mounting a long-shot bid for U.S. Senate against Ted Cruz. Westman, who lives in California, was so inspired by his message — “He’s the type of person who could not only help Texas, but our country,” she said — that she hosted long-distance phone banks for him and traveled to El Paso the weekend before the election to knock on doors for his campaign.

O’Rourke lost, but Westman stuck around. When the 47-year-old ex-congressman launched a presidential bid, Westman joined a 50-plus person team of loyalists known as Beto Road Warriors, who paid out of pocket to follow him across the country to campaign on his behalf. Westman visited seven states.

“It’s like Willie Nelson said, ‘Anything he wants to do, I’m with Beto,’” said Westman, a 32-year-old fashion designer.

No Texas politician has a fiercely loyal following quite like O’Rourke’s. His fans often compare him to Barack Obama circa 2008: a handsome, hopeful young Democrat with a precocious political rise and an optimistic message. In O’Rourke, who got within 3 percentage points of beating Cruz in 2018, they see something of a messiah who could usher in a new, blue era for Texas.

But his detractors — and there are many, even within the Texas Democratic Party — say his star has fallen. He and his supporters have become something of a bogeyman; his given name, Robert Francis, is commonly invoked by Republican candidates or strategists seeking to paint Democrats as phony or out of touch.

The passion on both sides was on display during a special election last month for a state House seat in Fort Bend County. O’Rourke, declaring his top 2020 priority is helping Democrats flip the Texas House, spent days in the district and encouraged his army of supporters to join the fight. O’Rourke’s new political group, Powered by People, bragged before the election about bringing 1,100 volunteers from 19 states to help support the Democrat in the race, Eliz Markowitz.

But Markowitz was annihilated. Her Republican challenger beat her by 16 percentage points, though O’Rourke lost by just more than 3 points in the district in 2018. Republicans were giddy, bragging afterward that their internal polling in the district found O’Rourke largely unpopular and suggesting that he might have hurt Markowitz more than he helped.

“Beto doesn’t seem to get it. He has lost at every level — Ted Cruz, the race for President, and now, Texas House District 28,” read a Jan. 31 email from Texas GOP 2020 Victory.

The state House loss left some Democratic operatives also scratching their heads about O’Rourke’s influence. According to The Dallas Morning News, the Texas House Democratic Campaign Committee advised its candidates after the special election not to speak to a reporter asking whether they would accept O’Rourke’s help with their campaigns.

First: Jacqueline Westman and Beto O’Rourke share a hug at the Polk County Steak Fry in Iowa. Last: Supporters attended a rally for O’Rourke in Austin last March when he was running for president.

“Ironically enough, Beto O’Rourke’s national platform has turned him into the Ted Cruz of the Democratic Party — meaning his profile is high enough and his positions extreme enough that his main remaining political benefit is to motivate and activate his opponents,” said Ted Delisi, the top strategist for U.S. Sen. John Cornyn’s Senate race in 2002.

For Thomas Long, a 56-year-old glass-blower and fellow road warrior who moved from Florida to Texas with his wife in part to work on O’Rourke’s presidential campaign, O’Rourke symbolizes “the heart of the Democratic Party.”

“He speaks the truth on issues, and the reason he’s able to do that in the way that he does is because he goes and talks to a number of people,” Long said. “His positions on issues are a reflection of the population and a reflection of moral center.”

Some of Long’s favorite messages from O’Rourke’s presidential campaign — that assault weapons should be banned and confiscated by the government and that religious institutions should lose tax-exempt status if they oppose gay marriage — are the same ones Republicans have used to portray him as out of touch with Texans.

“I didn’t find them to be controversial,” Long said. “I found them to be necessary, and maybe not extreme enough.”

For Democrats, a big turnout from O’Rourke’s energized loyalists could be a lifeline in a tight election. And the party is looking to build on a grassroots organizing strategy the El Paso congressman popularized in 2018: publicized visits to the state’s 254 counties, persuading parts of the electorate who typically don’t turn out the polls and an organic outreach effort by young voters.

In addition to hoping to compete in the 2020 presidential and U.S. Senate races, Texas Democrats are eyeing several suburban state House and congressional districts they think are within their grasp. O’Rourke is credited with making those districts competitive: His Democratic ticket won seats or came within single digits in 22 Republican-held districts in 2018, and he came the closest a Democrat has to winning statewide in a generation. 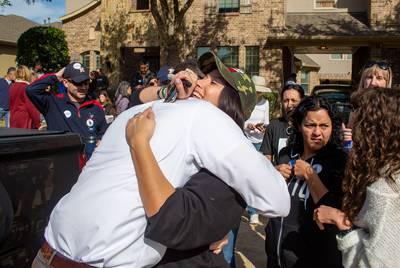 “Let’s give him his due: There is only one reason why anyone considers the Democrats to be on the rise in Texas, and that’s because of Beto,” said Harold Cook, a Democratic political analyst. “That’s the good news.”

“The bad news, potentially,” Cook said, “is that he took some positions running for president which I would imagine are way out of line with Texas voters, especially general election voters.”

O’Rourke, for his part, told the Morning News that if his “presence is unhelpful, I’ll stay as far away as I can.” But he seems aware of the unwavering allegiance among his flock and unperturbed by GOPers seeking to silence him.

“This is a fiercely loyal family, and everyone’s looking out for one another,” he told a reporter last month while block walking for Markowitz.

But as O’Rourke’s profile rose, a backlash began to emerge, too. After his Senate campaign exceeded expectations and drew national attention, O’Rourke’s followers essentially drafted him to run for president. Some pundits, however, argued that the state needed O’Rourke — there was scattered speculation he’d challenge Cornyn — more than the nation did.

Then during his White House bid, O’Rourke aligned with the most progressive wing of the party, touting policy decisions that might’ve been helpful in a national Democratic primary but raised worries they could hurt him in Texas.

“I don’t know how you don’t look back over the past few months and say Beto’s standing, Beto’s star power and ability to potentially run again himself, was enhanced by his run for national office,” Delisi said.

The question facing Democrats: Can the party capitalize on the energy he brings out of his supporters while minimizing the counter-energy he seems to provoke from the right?

“There’s no way anyone else would put their political future on the line like Beto,” said Brenda Jurgens, a former Republican from Aledo who switched parties because of O’Rourke. Jurgens, who already had “one foot out of the Republican party after Trump,” drove two hours to see O’Rourke speak at a Taco Tuesday event in a small Republican town at the height of his U.S. Senate run and has never looked back.

“Who else do you know in Texas who can mobilize people in 10 days and have people knock 40,000 doors?” she questioned.

In interviews, nearly a dozen O’Rourke loyalists made clear that they had a blind trust in the former congressman, and whether his next goal entails helping Democrats down ballot or even running for office again himself — some speculated a gubernatorial bid in 2022 — they would be right beside him.

“Betomania,” his supporters say, is a result of an amalgamation of factors, namely that he’s a uniquely charismatic candidate compared with the rest of the state Democratic Party, which has long lacked star power.

“He brought me so much hope and inspiration, as cliche as that sounds,” said Rose Dunshea, a 21-year-old from Rockwall. “His campaign raised my standards so high, and now that he’s out of the [presidential] race, no one’s been able to live up to him.

“Nobody seemed irrelevant to him or like they weren’t worth his time, and that just speaks volumes about him as a person,” said Dunshea, who drove from Dallas to Fort Bend County twice to campaign for Markowitz. She estimated she knocked on upwards of 500 doors.

After O’Rourke’s presidential bid ended, many of his followers said they embraced one of two main paths: switching their support to another presidential candidate or following O’Rourke to the state House.

Until the primaries are over, “I don’t know if I’m willing to phone bank for 30 hours a week for anyone else,” said Shireen Kahlon of Austin, who has helped a slate of local and congressional Democrats. “There’s a few candidates I like, but I’m not excited about any specific candidate” now that O’Rourke isn’t running for president. Kahlon says she’s never bought various pieces of political swag for a single political candidate, but she “bought three signs and two bumper stickers” after she heard O’Rourke speak for the first time during his U.S. Senate bid.

Westman and Long went to Joe Biden. The two campaigned for him in Iowa, where results have him in fourth place.

Now back in California, Westman, who is living out of her suitcase until heading to Nevada to campaign for Biden, said she was “damn proud” of the work she did. She said her excitement toward politics started with “a spark from Beto,” and she’s now trying to “light fires wherever I go.”

“Beto is a fearless, selfless leader and has shined a light on all. Whatever and wherever he goes or chooses to do, he’ll have a fighting force of driven warriors with him forever,” Westman said.

In fact, she’s gone so far as to buy a bumper sticker and received a button — she says she carries it with her every day — pledging her allegiance to his future political endeavors. The paraphernalia — which resembles the distinctive black-and-white signs for O’Rourke that popped up in lawns for most of 2018 — rearranges the letters of O’Rourke’s nickname.