Man in serious condition after being shot in the chest on the Southeast Side, police say

BCSO: Woman who jumped out of moving vehicle dies of multiple stab wounds

What makes a religious person radicalized?

SAN ANTONIO – How do you define radical? What does it mean to radicalize -- or to be radicalized?

Does it draw images of a person with a head covering, long robe and a machine gun in tow? Is it a less dramatic situation: A church leader whose radical ways are intended for good, rather than evil?

However you interpret that word, there is no doubt it has played a major role in the global 21st Century.

When the shooting in San Bernardino happened late last year, Americans once again gasped at the horror of such an atrocity. Fourteen people were killed and 22 others were seriously injured.

At the center of the shooting spree and attempted bomb attack were a young married couple who, according to those who knew them, never exhibited signs that they could plot such a terror.

The FBI’s investigation revealed that the perpetrators -- Syed Rizwan Farook and Tashfeen Malik -- were “homegrown violent extremists” who were inspired by foreign terrorist organizations.

RELATED: FBI: Shooters were radicalized 'for quite some time'

In the media coverage that ensued after the attack, the pair was described as radical. The question of how they became “radicalized" — whether through their travels and studies abroad and in the U.S. or via other means — became central to the narrative that followed.

So what is radicalization and radicalism and what causes a person to become radicalized?

Radicalization is the process by which a person or group comes to adopt increasingly extreme political, social, or religious ideals and aspirations that reject or undermine the status quo, or rejects and/or undermines contemporary ideas and expressions of freedom of choice. It’s argued that becoming radicalized doesn’t necessarily lead to violence.

In Communication Currents, a publication of the National Communication Association, Dr. Jonathan Edwards, an instructor at the University of South Carolina, studied the words radical, radicalization and radicalized. He used congressional hearings that took place between 2011 and 2012 as his case study. 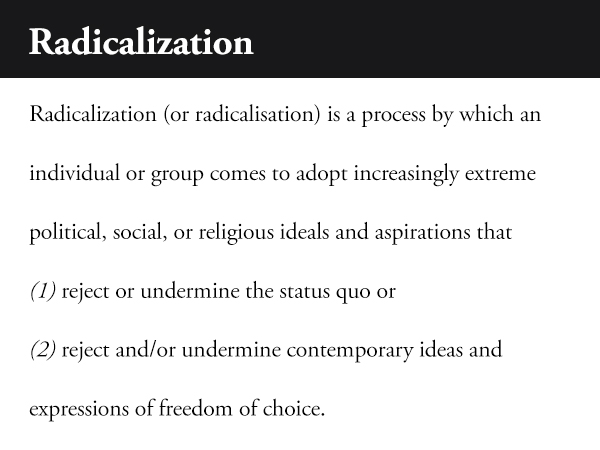 With a tool called polyptoton, which is used to determine a meaning of a word that’s used in different contexts, Edwards found that the word “radical” is rarely used to describe individuals and when it is, it’s associated with a choice that they made.

“Radicals may be bad people, they may be dangerous fanatics, but they choose to act,” Edwards wrote.

But throughout the hearings, Edwards said it was implied that radicalized individuals do not guide their own changes in political belief or affiliation with a particular religion.

“Unlike the radical who chooses,” said Edwards, “those who are being radicalized are presented as somehow alienated from their choices and thus, among other consequences, they have no right to defend those choices or speak on their own behalf.”

The FBI concluded that Farook had become radicalized over several years before the attack, consuming “poison on the Internet,” according to FBI Director James Comey, and expressing a commitment to jihadism. They were inspired -- but not directed — by foreign terrorist organizations, the FBI said.

“There is an aspect of the human being that can be radicalized or made to be extreme, and there’s probably many reasons for that." -Imam Omar Shakir

Often, religion is believed to be at the center of one’s radicalization, or radical ideals. And often, the debates fling Muslims into the fray.

RELATED: SA Muslim: 'I am not responsible for what that man and his wife did.'

With 1.5 billion Muslims in the world, Imam Omar Shakir, a Muslim leader in San Antonio, says the violence and terrorism propagated by radical groups is not representative of the Islamic faith.

In all of these attacks, the common element, Shakir said, is the human element.

“There is an aspect of the human being that can be radicalized or made to be extreme, and there’s probably many reasons for that,” Shakir said.

“I believe that what happens is if you’re orientated a certain way -- meaning that if you’re given a concept or an idea by someone you trust and you don’t have enough of your own mind or enough to do your own research -- you tend to believe the truth of what that is, whatever is it.

“If they say the Quran, for example, says do this, and you may not have even read it in the Quran, but you trust that person as a religious authority or a scholar, you take on his meaning or interpretation. What’s important about this, all scriptures… you will find verses (in the Quran) that would talk about perhaps violence or fighting or wars or things like that. But you must put those in a context and if you’re going to call on those verses today, you got to make sure you’re comparing apples to apples. And in this case, particularly with ISIL and ISIS and Al Qaeda and all those, I find no justification in scripture to support what they’re doing.”

But Islam is not the only religion facing this issue.

“Part of the concern or confusion is what radicalization means,” said the Rev. Paul Ziese, senior pastor at MacArthur Park Lutheran Church in San Antonio. “To be radical traditionally means to go to the root or core of something, and so in many ways to be radical is a positive thing. Now in our culture, to be radical means to be way out on the edge so the word has changed its meaning and I think that’s part of the confusion with it.”

To be Christian, Ziese said, is to love your neighbor and God in a radical way. To be a radical Christian is a good thing.

“A radical Christian would be a very loving Christian,” he said.

He finds there to be a problem with the word. But there’s also a problem in its representation.

The Klu Klux Klan, for instance, claimed to be a Christian group. They wore white robes and crosses around their necks.

“But the overwhelming number of Christians would say yes, they claim to be Christian, but they’re really not and I think the same thing could be said of jihadists,” he said. "All faiths have that problem, where you get a group of folks that maybe take one narrow teaching and say this is what’s central and if you don’t agree then you need to be killed or something and they will go out and start doing all kinds of violent things in the name of their faith when really they have a very immature understanding of their own faith.”

“That is the pope, and the Catholic bishops around the world in communion with him,” Zapiain said. “They have the authority to teach definitively about the faith so even if someone thought, ‘You know, I have this really neat idea for the development of faith.’ It’s always tested against what magisterial teaching is about and that is how it’s gauged.”

And magisterial teaching goes toward belief and practice.

This authoritative teaching, Zapiain said, keeps things in check and prevents ideas from veering off into radical ideas. 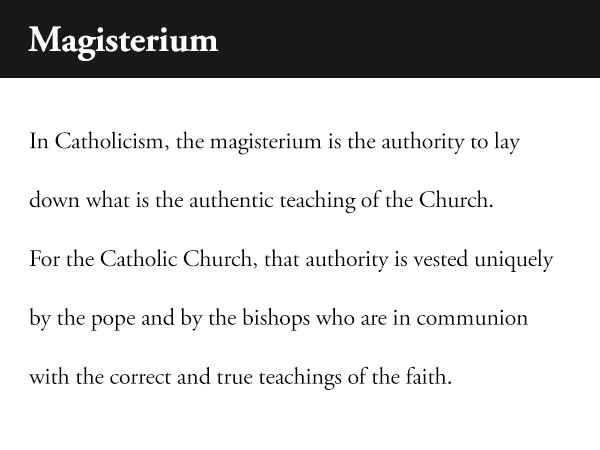 One reason that Zapiain believes a person may veer into into radicalization is because they may be disenchanted with their local leadership. She also thinks that people who become radical are called to live a more pure or committed form of their beliefs.

And that’s a good thing, she said.

But that can quickly fall off course of mainstream teaching.

Judaism, too, has been forced to face the subject.

“Sometimes it’s easier to have someone to tell you what to do, but you should be careful because if someone’s always telling you what to do and you don’t ever question it, then that could lead you down a road that you may not think you’re going down.”​ Rabbi Mara Nathan

“It makes me very sad and it also frustrates me to no end,” Rabbi Mara Nathan, of San Antonio's Temple Beth-El, said. "All of the faith traditions that we learn about at their core, they preach love, they preach peace, they preach understanding of other people, and it feels just such a travesty and also tragedy when people take their religion and use it in zealous ways and become fundamentalists to the extent, not in their religious practice - I think everyone is welcome to observe their religion in terms of their own ritual however it it inspiring to them - but when they take teachings that are meant for a community to discipline itself in its own faith and connection to God and use those as excuses to wreak havoc and are violent against innocent people, I think it gives a bad name to religion in general and makes people who are upset about that want to not be a part of organized religion.”

As she sighed, Nathan pondered the reasons people become radicalized.

She said she thinks the most susceptible people to fall prey to it are those who are uneasy in their own lives and are looking for strict guidelines on what to do and say. They do this so they don’t have to make choices for themselves.

“Ethical living requires lots of really challenging decisions and choices that we make every day in our lives,” she said. “Sometimes it’s easier to have someone to tell you what to do but you should be careful because if someone’s always telling you what to do and you don’t ever question it, then that could lead you down a road that you may not think you’re going down.”​

Click here for more on how law enforcement is keeping tabs on those who become radicalized.

RJ Marquez is a reporter who has been at KSAT since 2010. He's covered a variety of stories and events across the San Antonio area. He also covers the Spurs for our on-air and digital platforms. You can see RJ regularly on KSAT News at 9 and Good Morning San Antonio.