When former Austin City Council Member Greg Casar stood before a crowd of cheering supporters Tuesday night, he portrayed his ascent from Workers Defense Project policy director to Democratic nominee for Congress as a sign that Republicans’ stronghold on Texas masks a burgeoning progressive movement.

Because the district, which stretches from Austin to San Antonio, is made up of mostly Democratic voters, Casar is expected to easily win in November’s general election. That means the 32-year-old son of Mexican immigrants will almost certainly be one of the youngest and most progressive people Texans have ever sent to Congress.

And he may not be alone.

National and state activists view the three progressive Democrats advancing after Tuesday’s primary election as a potential shift in the political winds in Texas, where new political maps dramatically reduce the number of districts that are competitive between both major parties. The lack of battlegrounds in general elections enables activists on both sides to try to push their parties further to the right or left in the primary.

“We’re excited. It was a good night for progressives — a big night,” said Aaron Chappell, political director of Our Revolution, a progressive advocacy organization born out of the 2016 Bernie Sanders presidential campaign. “We see that progressives can win and run really well.”

Casar, Cisneros and Crockett boldly support a slate of liberal domestic policies that are often at odds with the direction state-level officials are taking Texas. They want to combat climate change, expand access to health care and protect workers’ rights.

To be sure, Texas’ congressional delegation is expected to remain majority Republican after the November midterm election. Under the state’s new political maps, former President Donald Trump would have won 25 of Texas’ 38 congressional districts. But the sway a Texan in Congress holds over national policy largely depends on which party is in power in Washington, D.C.

And this election cycle, Republicans are trying to take back the U.S. House and Senate from Democrats. The GOP frames progressive platform points like the Green New Deal and Medicare for All as too left and out of touch with moderate American voters. 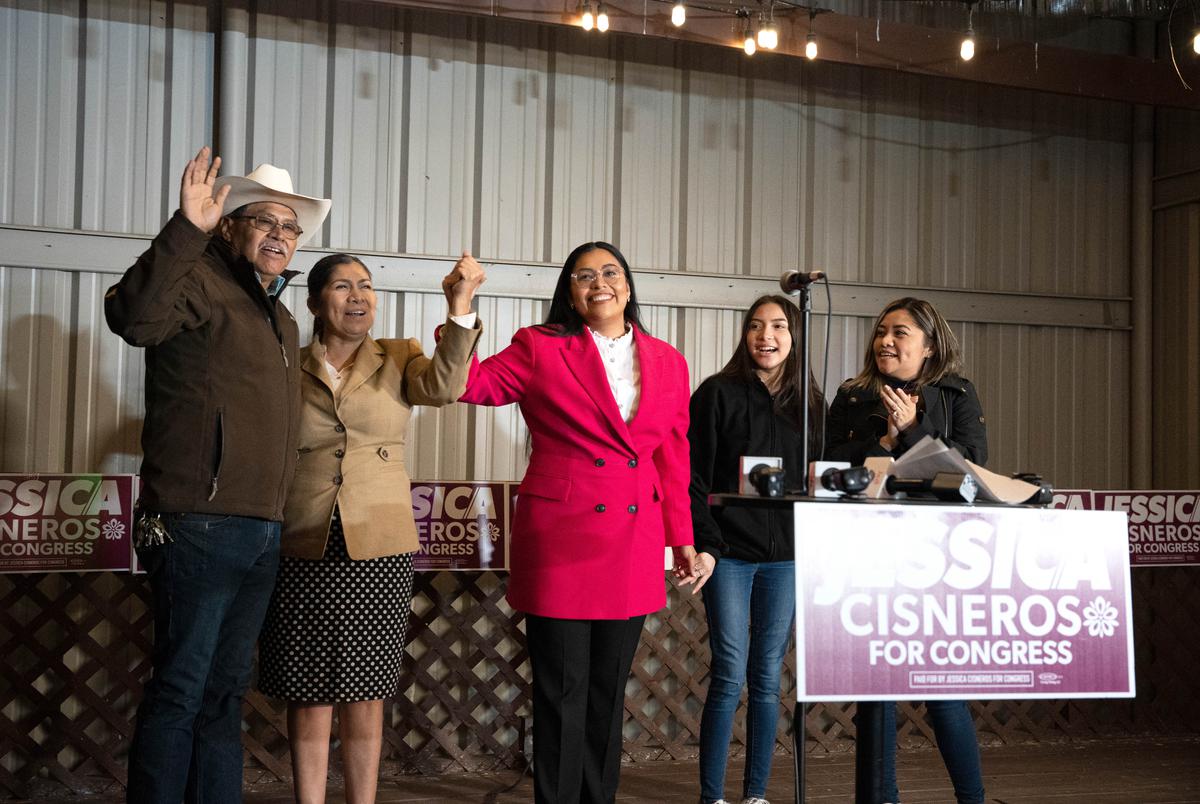 Jessica Cisneros, center, and members of her family celebrate on stage at her election watch party. Credit: Jessica Nicole Rodriguez for The Texas Tribune

But progressives push back on characterizations that their policies are unrealistic and instead say that the platform their candidates run on represent commonly agreed-upon changes that can have real effects on a family’s life and economic mobility.

“These leaders are representing young, working-class interests and working family interests in the state,” said Tory Gavito, president of progressive advocacy fund Way to Win. “And I think it’s the labels that get put on these commonsense ideas to try to marginalize them because there are interests that are afraid of change. But the reality is that the electorate in Texas knows we need to change.”

Advocates also say Republicans worry about the inroads that progressives may make, especially as people of color fuel the state’s population growth. On the other hand, Republicans have targeted voters of color, specifically Latinos, as a part of their newest offensive to secure future electoral victories in the rapidly diversifying state.

“At the state level, Republicans clearly are scared of change. They’re worried about keeping their grasp on power, clearly, because why else would they be fighting so hard to restrict the right to vote?” Chappell said, pointing to the Texas voting law that some civil rights advocates have accused of being racially discriminatory and has led to the rejection of hundreds of mail-in ballot applications.

Several of Texas’ Democratic representatives in Congress are members of the Congressional Progressive Caucus, such as U.S. Reps. Veronica Escobar of El Paso, Sylvia Garcia of Houston, Lloyd Doggett of Austin and Sheila Jackson Lee of Houston. But they tend to fall in line with the party when it counts.

If elected, Casar, Cisneros and Crockett are expected to be more outspoken against the party line, joining the likes of progressive representatives like firebrand U.S. Rep. Alexandria Ocasio-Cortez of New York, who has been willing to vote against the wishes of her party when the progressive agenda is at stake. For example, Ocasio-Cortez and some of her peers voted against a bipartisan infrastructure revitalization bill last fall when they were not guaranteed a vote on social safety net legislation that included a number of progressive initiatives.

Ocasio-Cortez campaigned in Texas for Casar and Cisneros ahead of the primary.

“There's a new generation of young progressives, especially young progressives of color, that are coming up and have a different vision for Texas and the country,” said Cristina Tzintzún Ramirez, president of the advocacy group NextGen America that works to empower young people and a former Democratic candidate for U.S. Senate. “I think it will be very transformative for Democratic Texas politics.”

“We're not just going to rally around anyone who says that they are a Democrat or a progressive in name only,” Gómez, 32, said. “You have to truly have progressive values and show that and that's why folks got so excited about Greg and rallied around him — because we’ve been waiting for candidates like him to truly represent our progressive values in the state.”

Progressives on the rise in North Texas and South Texas

While Casar has all but secured his path to Congress, Crockett, 40, still has to beat out longtime party worker Jane Hope Hamilton in a runoff for the 30th Congressional District on May 24. But after grabbing 48.5% of the vote in a nine-way primary — and incumbent Johnson’s coveted endorsement — Crockett is the early favorite to win. Hamilton received 17% of the vote.

Casar defeated three opponents, most notably state Rep. Eddie Rodriguez of Austin, with 61.2% of the vote. Rodriguez came in second with 15.6% of the vote.

Like Casar’s district, Crockett’s has a heavily Democratic populace and the party’s nominee there is also expected to win in November. 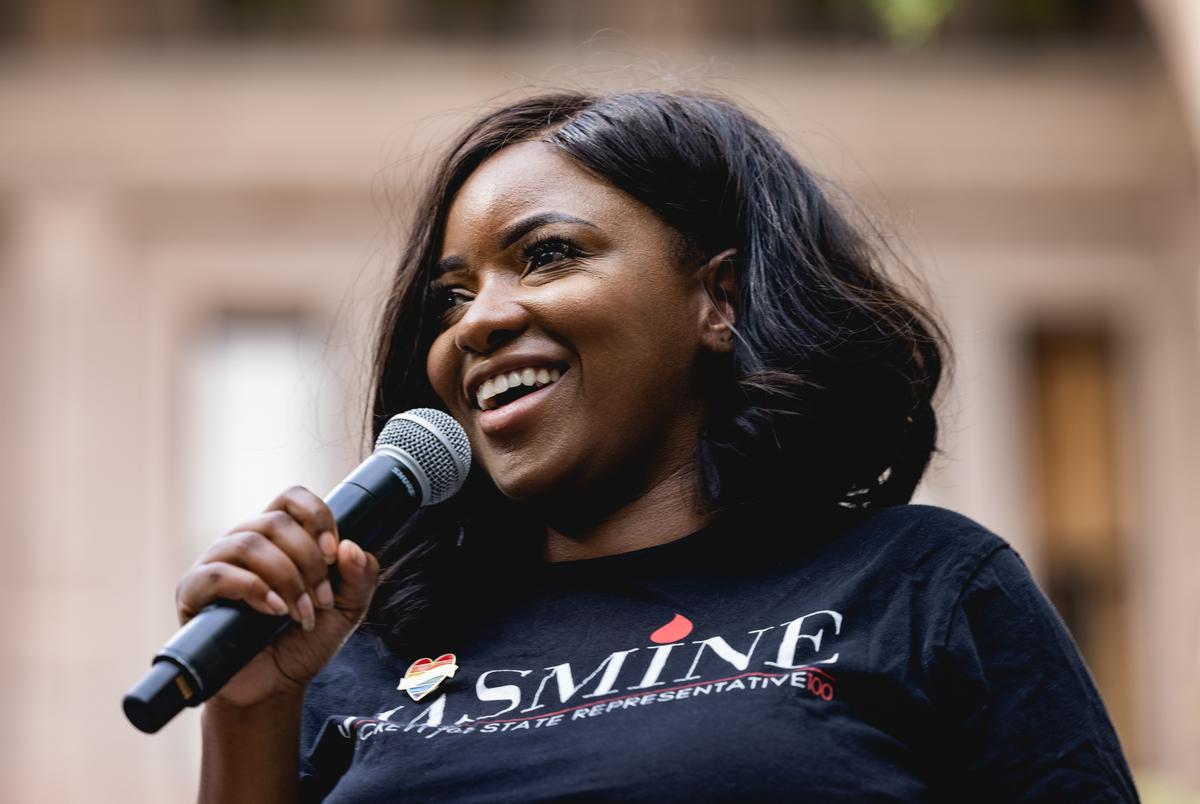 “The people of District 30 supported our unifying message focused on the bread and butter issues that keep us up late into the midnight hours, and the hopes and aspirations that get us out of bed in the morning,” Crockett said in a statement after Tuesday night’s results. “We focused on opportunity, equality, and justice for all.”

A former civil rights attorney, Crockett’s rise to prominence began during her election to the Texas House in 2020. During the legislative session last year, she was one of the most vocal members of the Texas Democratic delegation that walked out on debate on the Texas voting bill and fled to Washington, D.C., to advocate for national voting rights protection.

Cisneros likely will face the most difficult path to election. It’s her second attempt to unseat Cuellar in the 28th Congressional District and she must eke out a runoff victory against the incumbent, whose family is nearly legendary in the area, and then also beat out a Republican candidate whose party is backing an insurgency in South Texas.

As one of the most conservative members of the Democratic delegation, Cuellar has long met the ire of progressive Democrats who believe that his anti-abortion position and funding from the oil and gas industry are unacceptable. Additionally, the FBI raided his home in January, prompting questions over possible illegal activity and his connections to Azerbaijan, an ex-Soviet country with a troubling history on corruption and human rights.

Cuellar missed avoiding a runoff by a slim margin, collecting 48.4% in the primary. Cisneros came out with 46.9%. A third candidate, Tannya Benavides, received 4.7% of the vote.

“Henry Cuellar did not meet the 50% to get the Democratic nomination for Congress, so that means that over 50% of voters in our district want new leadership for TX-28,” Cisneros said in a press conference Wednesday morning, answering questions in both English and Spanish. “I’ve been in this fight since 2019, and it’s really exciting to see how our conversations on the people-centered policy that we’re running on have gotten so much momentum.”

Because runoffs have low voter turnout, progressives are hoping that Cisneros has the momentum to end the dynasty Cuellar and his family have built in Laredo, a key city in the district. Cuellar began his career in politics in 1987 in the Texas House, before going up to Congress in 2005.

Republicans are hoping for a Cisneros win and believe that her unabashed progressivism will make her easier to defeat in November. The party is looking to gain support from Latino voters in South Texas, where President Joe Biden underperformed in his 2020 election, and are trying to present a pro-police and strong border control conservative pitch to people in the region.

“Democrats can’t take for granted the Latino vote,” Ramirez said. “They need to invest and mobilize and go speak to that power and the power of the community.”