A Haunting in South Texas - Faust Hotel in New Braunfels

NEW BRAUNFELS – The historic Faust Hotel in New Braunfels is known for its ghost stories. Employees and guests have shared their spooky tales.

The Faust Hotel was ahead of its time when it opened in 1929 and was run by Walter Faust.  Current owners Vance Hinton and his partners bought the place in 2009, and have since restored the rooms and reopened the brewery.

Current workers say that guests are constantly telling them about things they see or hear while staying in the hotel.

“We have guests that stay here all the time, and say they wake up in the middle of the night and say they see something or they feel something,” Faust employee Brandi White said.

EXPLORE: Take a look back the ghosts of the Institute of Texans Cultures

Bar manager Donny Bachhofer said that inside the bar, glasses have fallen on their own, and kitchen staff have seen the apparition of a man believed to be Walter Faust wearing a black trench coat and a black hat.

EXPLORE: Find out more about the spooky Menger Hotel in San Antonio

With the help of San Antonio Paranormal Investigations, each floor of the hotel was examined for cold spots, apparitions or voices.

Staff said that a lot of activity has been reported on the second floor toward the end of the hallway near rooms 215 and 217.Children have said to be heard playing in the middle of the night when the guest list shows no children staying on that floor.

Learn more about the history of the Faust Hotel 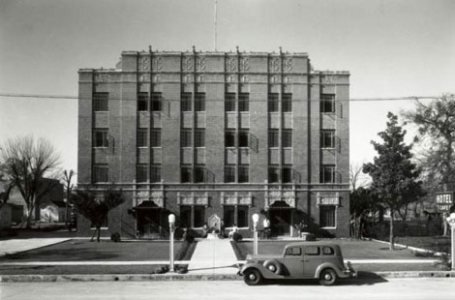 “So there is an 8-year-old girl that lives on the second floor and you can hear her ... playing and giggling in the middle of the night,” White said.

EXPLORE: A Haunting in South Texas

An EVP session held inside one of the rooms revealed that something was there, and the devices held by paranormal investigators Nannette Patton and Gene Ritnour went off.

The audio recorder picked up the sounds of voices in the room as well.

EXPLORE: Video of EVP Session and hear audio of voices in the hotel room

The ghost of Walter Faust apparently haunts the hotel, but could not be found during KSAT’s investigation.

If you decide to stay at the Faust Hotel, employees want you to know that your night may be long but nothing is ever violent.

“They seem to be pretty friendly, they don’t mess with you too much,” Bachhofer said.

Erica Hernandez is an Emmy award-winning journalist with15 years of experience in the broadcast news business. Erica has covered a wide array of stories all over Central and South Texas. She's currently the court reporter and cohost of the podcast South Texas Crime Stories.