SA Live is the top-rated local afternoon variety show that features all the things that make living in San Antonio and South Texas great!

An air quality alert in effect for Caldwell and Hays Regions

An air quality alert in effect for Caldwell and Hays Regions

Learn up to 14 languages with Babbel, now available at a 40% discount

Coronavirus in Texas: Bars, bowling alleys and other businesses can begin reopening Friday

Texas bars can reopen Friday for the first time in more than a month. But they must limit how many customers are inside.

What you need to know Friday:

As part of Gov. Greg Abbott's attempt to begin reviving the economy, myriad Texas businesses can reopen Friday. That includes bars, bowling alleys and aquariums at limited capacity. Restaurants can also operate at 50% capacity; they've been permitted to operate at 25% capacity since May 1. At bars, dancing and other close-contact interactions are discouraged, and customers should be seated at tables. For bowling alleys, bingo halls and roller skating rinks, customers must be kept 6 feet apart, including between bowling lanes and people playing bingo. Here is a full guide to the businesses that can reopen and the guidelines they must follow. — Clare Proctor

State's unemployment rate for April expected to be released Friday

Texas' unemployment rate is expected to be released Friday and will provide the government's clearest and most comprehensive look so far at the economic devastation wrought by the coronavirus pandemic. The rate will reflect the number of people who were out of work in April, when officials shuttered the state's economy to stop the spread of the virus. March's unemployment rate was 4.7%, and analysts said last month that April's figure could exceed 10%. If that happens, it will be a record high for the state.

Previously, the state’s worst-ever monthly unemployment rate was 9.2% in November 1986, as Texas reeled from the last big oil bust. Now, with more than 2 million Texans who have filed for unemployment benefits during the outbreak, a contracting oil industry is only part of the state’s economic problems. — Mitchell Ferman

Filed on behalf of three inmates with underlying health risks who are detained in the county jail, the suit argues inmates can’t practice social distancing and lack access to proper sanitization like soap. It also calls into question the lack of transparency around testing.

About 1,800 inmates have underlying health issues, the newspaper reported. But as of May 1, the jail was averaging only 11 tests a day, and as of Wednesday, the jail reported that 226 inmates and 62 guards had tested positive for the virus.

Coronavirus hots pots have emerged across the state in jails and prisons, calling into question the availability of testing. 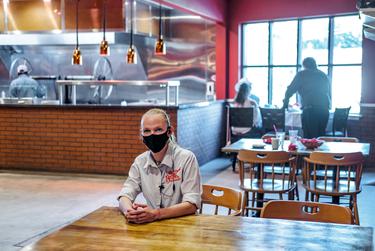 Donna Heath is a manager at The Barn Door Restaurant in San Antonio, which recently reopened. On Friday, restaurants can increase the number of people they serve at one time to 50% of their occupancy. Christopher Lee for The Texas Tribune

Texas officials are expected to release the latest number of people testing positive for the new coronavirus Friday. As of Thursday, at least 52,268 Texans had tested positive, and at least 1,440 had died.