Children’s Ballet of San Antonio to perform The Nutcracker

Historically red Tarrant County diversified in the last decade. Now Republicans are trying to divide up its voters of color.

Over the last 10 years, the voters of color in a steadily diversifying Tarrant County have seen their political clout grow.

In Texas Senate District 10, which is nestled entirely inside of Tarrant and makes up about half of the county population, the district’s growing Asian, Black and Hispanic populations regularly band together to pick Democratic candidates, including former state Sen. Wendy Davis in 2012 and the current incumbent, Sen. Beverly Powell, in 2018.

But as lawmakers charge ahead with redrawing district lines, those voters of color could see their voting strength diluted in the Texas Capitol. The proposed Senate map, drafted by Republicans, took aim at the district — splitting it up and pairing its voters with those in counties to the south and west that made the district much whiter, more rural and more likely to vote for the GOP.

Powell said Republicans in charge are clearly trying to deny voters of color their voice in elections in an effort to bolster conservative representation.

Since the enactment of the Voting Rights Act in 1965, Texas has not made it through a single decade without a federal court admonishing it for violating federal protections for voters of color. Ten years ago, a federal court ruled that a similar attempt to redraw District 10 was intentionally discriminatory.

The chamber’s chief map-drawer this time around, Sen. Joan Huffman, R-Houston, has said the maps were drawn “race-blind.”

In hearings following the release of the Senate’s proposed map, Tarrant County elected officials and residents implored lawmakers to leave the district unchanged. But an amended proposal headed for a vote in the full Senate now has the remaining Tarrant County sections of the district tied in with eight rural counties in the new Senate District 10 — six more than the original proposal.

Powell said urban voters of color who remain in the district would be drowned out by white, rural voters in Cleburne and Mineral Wells with different needs. She has pleaded with her colleagues not to break apart the existing district.

“This is personal to the people of Tarrant County,” she said. “They want to preserve their ability to have their voices heard in their elections.”

But on Monday, longtime state Rep. Phil King, a Republican who lives in Parker County, one of the new counties in the proposed district, announced he would run for the seat if lawmakers approved it. Twenty minutes later, Lt. Gov. Dan Patrick, who presides over the Senate, endorsed King for the seat.

On Tuesday, the Senate Redistricting Committee approved the map by a vote of 12-2.

Huffman has said she consulted with the attorney general’s office to ensure the maps she drafted comply with the Voting Rights Act, which protects racial minorities from discrimination. But she has refused to say what specific parameters she considered in her work.

Huffman’s office did not respond to a request for comment.

Under its current configuration, District 10 has an eligible voter population that is 54% white, 20% Hispanic, 21% Black and 3% Asian. Under the proposed changes, the district’s voting age population would be 62% white, 17% Hispanic, 17% Black and 2% Asian.

But more precisely, Powell said the proposed map draws a “jagged gash” from east to west Tarrant County that splits up traditionally Hispanic neighborhoods in north and south Fort Worth. Those in the south remain in the district, while those in the north are placed in a newly drawn Senate District 9 represented by Republican Sen. Kelly Hancock.

In total, Powell said, 133,000 people — more than 70% of them people of color — are moved out of Senate District 10 and into Senate District 9, whose eligible voting age population under its new boundaries would be majority white.

Tristeza Ordex, a Latina political activist who helped campaign for Powell in 2018, said moving Hispanics into a majority-white district would harm their ability to elect candidates who push for issues important to them.

“The Republican Party is doing everything they can to try to break some of the voters in that district,” Ordex said. “That’s going to affect us.” 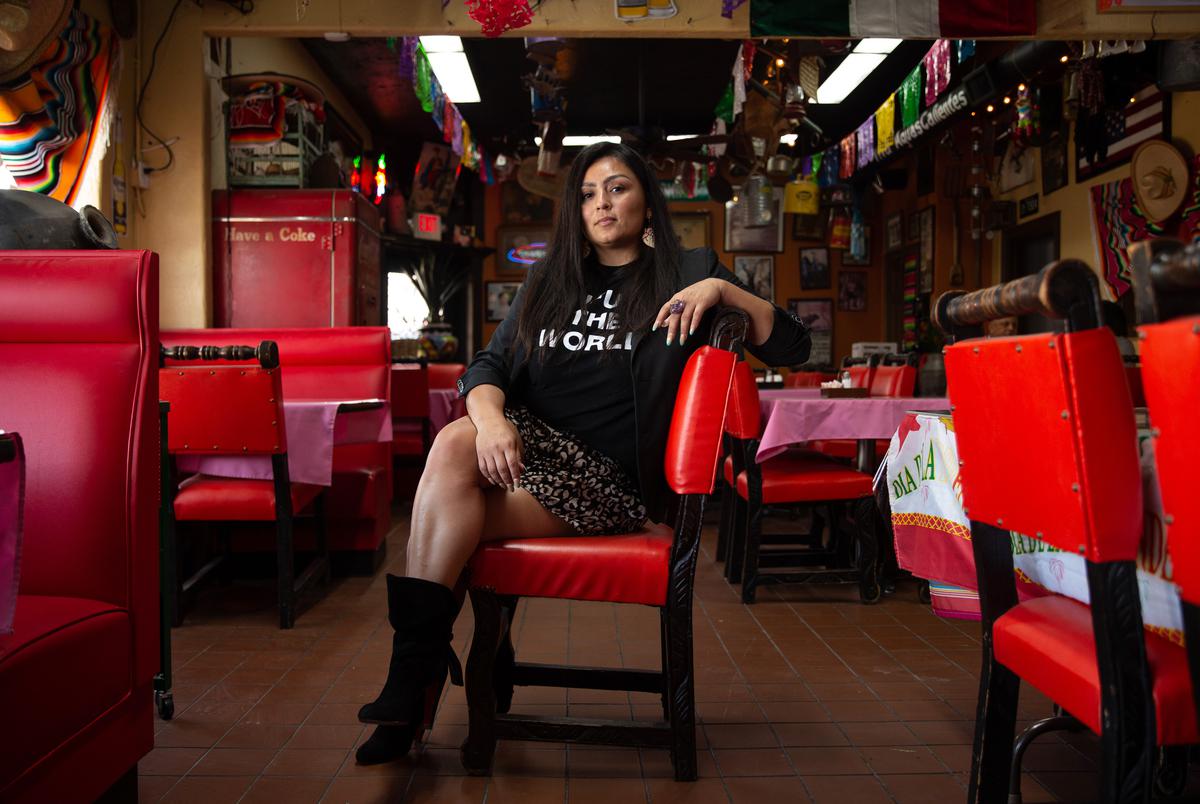 Tristeza Ordex is an activist in Tarrant County, voicing her concern over the proposed redistricting of Senate District 10, with the new version reaching into more conservative Parker and Johnson counties. Credit: Shelby Tauber for The Texas Tribune

She noted that before Powell, Senate District 10 was represented by Konni Burton, a staunchly conservative GOP senator and strong proponent of the “sanctuary cities” ban passed in 2017.

“That hurt so many people,” Ordex said, noting that Burton’s views were at odds with many of the district’s residents. Burton lost her reelection to Powell.

In recent years, Tarrant’s Latino community has organized around issues like putting an end to a county program that allows the sheriff’s office to hold immigrants living in the country illegally for federal immigration authorities, Ordex said. Community activists have sent dozens of people to commissioners court meetings to pressure officials to end the contract, showing the growing influence of voters of color in the county.

If those voters are shifted into safely Republican Senate districts, Ordex fears their concerns would be brushed aside. Ordex, who has worked as a staffer for state lawmakers, said the district could get a senator who supports ending the Texas Dream Act, which guarantees in-state tuition to immigrants in the country without legal permission.

“They dilute our vote, and what are they going to do?” she said. “They’re going to make decisions for us.”

Sergio De Leon, a Tarrant County justice of the peace, said the issues of a major urban area like Tarrant are not aligned with the largely rural counties that the Senate’s proposal would add to the district.

“Inner-city Fort Worth Hispanics do not tend to cattle, they don’t cut hay or gather at the feed store,” he told lawmakers. “We work two or three jobs, meet up at the Fiesta supermarket and taquerias.”

In the eastern section of the district, Powell said, the map “shoves a crooked billy club” north from Senate District 22, represented by Republican Brian Birdwell, that splits the city of Mansfield, a rapidly growing district with a growing and diverse population, into two Senate districts.

Evans, the city’s mayor, told lawmakers that more than 41,000 of the city’s 72,000 residents were placed in Senate District 22, which runs as far south as Waco.

“The remaining 30,056 Mansfield residents are packed into new SD-10 but submerged in a district dominated by Anglo voters in Johnson, Parker and now other rural counties of record, of which our city shares no interest,” he said.

Evans said his city deals with urban issues like mass-transportation infrastructure, housing and equity in local public schools and would have “no influence in agrarian and rural communities.”

Sixty-five percent of the city’s Black population is drawn into District 22 while the remaining 35% goes into District 10, even though the city has been entirely contained in District 10 for the last two decades.

“It is discriminatory, it is illegal,” he said.

Asked by state Sen. Judith Zaffirini, D-Laredo, how he would change the map, Evans responded:

“I would leave it just as it is, and watch it continue to grow, so that the community can come together and vote for and elect the candidate of their choice.”