Stay cool this summer with this portable air conditioner for only $69.99

With a congressional seat suddenly open, Democrats in the Rio Grande Valley race to recruit for a competitive district

Democrats in the Rio Grande Valley are scrambling to make up for lost time after U.S. Rep. Vicente Gonzalez, D-McAllen, decided to seek reelection in a different district, leaving an open seat in what is expected to be the state’s most competitive congressional race next year.

With less than a month and a half until the candidate filing deadline, Democrats are sorting through their options for a primary that had been an afterthought given the perception Gonzalez would remain in the 15th Congressional District.

But during this year’s redistricting process, Texas lawmakers redrew the state’s congressional maps to fortify their hold on power. They made the 15th District more competitive and drew Gonzalez’ home into the nearby 34th Congressional District. Many Republicans have already rallied around Monica De La Cruz, who gave Gonzalez a surprisingly close race last year and quickly launched a comeback bid.

At least two Democrats declared for the 15th District as it became increasingly anticipated that Gonzalez would bail on a reelection bid there, but recruitment is only just beginning.

Civic engagement group LUPE Votes is launching on Monday what it describes as a “people-powered nomination process” — called We the Pueblo — to find a candidate the political organization can champion. The group, whose priorities include Medicare for All and a $15-per-hour minimum wage, is inviting people in the 15th District to nominate someone who “shares the values of working Texans,” said Dani Marrero Hi, a spokesperson for LUPE Votes. She said the group is looking for someone intimately familiar with those struggles and not “from the top 1% of the Valley.”

“We’re tired of establishment Democrats making promises after promises every year, then leaving or abandoning the district, like Vicente Gonzalez is doing, when times get tough,” Marrero Hi said. “When they do that … it leaves our region vulnerable to Republicans to come in and write our story.”

Republicans are gunning more than ever for the 15th District, eager to capitalize on President Joe Biden’s underperformance throughout South Texas last year. And the GOP-led redistricting process put the 15th District even more within reach for Republicans, morphing it from a district that Biden lost by 2 percentage points to one that Donald Trump would have carried by 3 points. 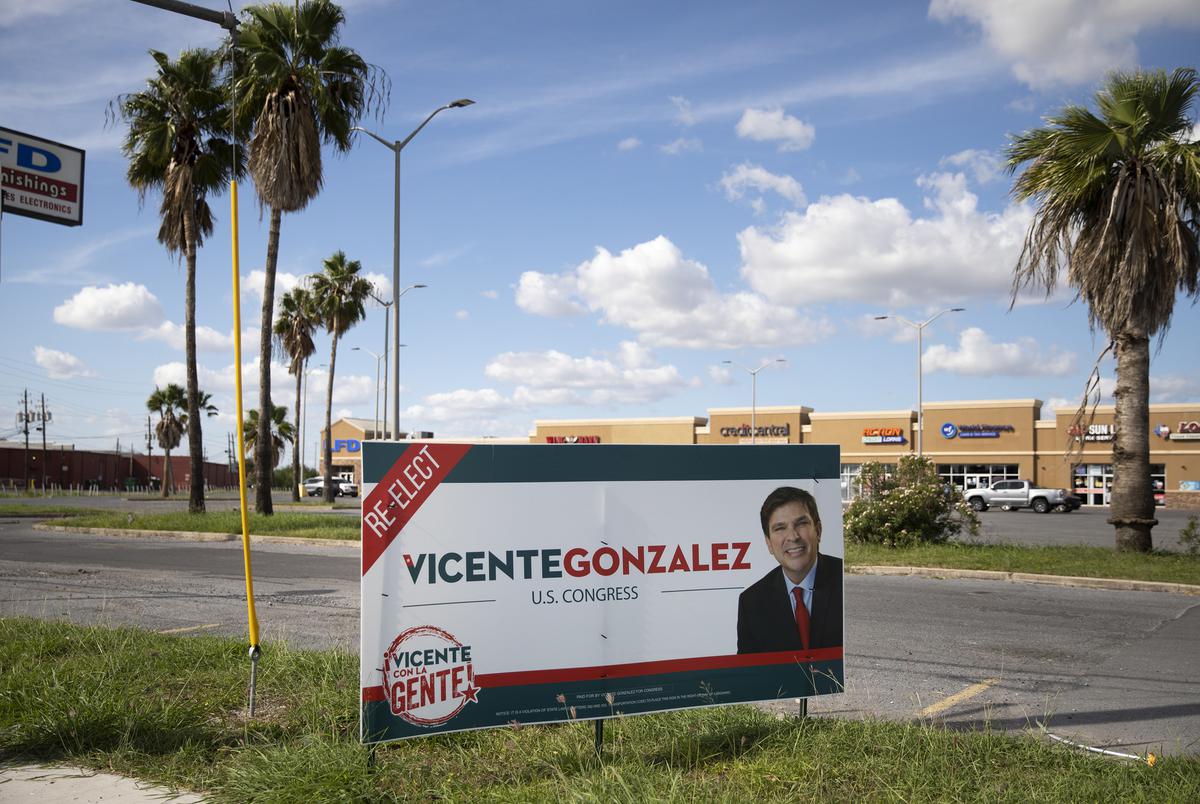 It did not take long after the first congressional map proposal came out for Gonzalez to say he would consider switching to the neighboring 34th District, where U.S. Rep. Filemon Vela, D-Brownsville, is retiring and the landscape was drawn to be more favorable to Democrats. Vela backed the move, and then a Democratic amendment to the map moved Gonzalez’s home into the 34th District, making the switch all but guaranteed before Gonzalez officially announced it Tuesday.

The Democratic Congressional Campaign Committee, the campaign arm of House Democrats, had named Gonzalez a Frontline member in the 15th District, a designation reserved for the most vulnerable Democratic incumbents. The committee says the seat remains a priority after Gonzalez’s switch.

“The DCCC will be fighting from now until Election Day to ensure this district stays in Democratic hands,” DCCC spokesperson Monica Robinson said in a statement for this story.

Some groups like the DCCC were unable to recruit for the seat while Gonzalez was set on a reelection bid there, but they are optimistic about the initial phase of recruitment.

The clock is ticking. While litigation over the new maps could postpone the primary, the secretary of state’s office confirmed last week that the filing period is still set to begin Nov. 13 and end Dec. 13.

The Democratic field for the 15th District includes at least two candidates so far: Ruben Ramirez, who previously ran for the seat in 2016, and Eliza Alvarado, director of partnerships and career pathways at the Region One Education Service Center, which assists public school districts in Rio Grande Valley and other parts of South Texas. She previously worked for Gonzalez’s predecessor in the 15th District, former Rep. Rubén Hinojosa, D-Edinburg.

In an interview Friday, Alvarado said the 2020 results were a “call to action” and that Democrats were “absolutely” playing catch-up due to Gonzalez’s decision.

“I think that we knew it was coming, but that didn’t mean that we were sure that was going to happen,” Alvarado said. “Definitely stepping up and having to make up for lost time is something that’s going to be really important. I hope this race draws attention from the national party … and the state party, and they put funds into this race because it’s really important. Hidalgo County has been the Democratic stronghold since the 1800s, and this is something that’s not going to be given up lightly.”

Still, discussing how Democrats can keep the district blue after the 2020 shocker, Alvarado said they need to show they can work with Republicans, “and we need to understand the issues important to them.” She specifically referenced the concerns of farmers and ranchers in the rural parts of the Valley, and she said she believes her background in education has bipartisan appeal.

Gonzalez’ decision is not just causing upheaval on the Democratic side of the race. In a fundraising email Friday, De La Cruz braced her supporters for a more crowded contest now that the new congressional map is law.

“Democrats will launch campaigns with the idea in mind that they’ll be able to hold this seat for the Democrats – who have held it for 118 years; and Republicans are entering the primary against me now that the path is smoother to flip this seat red for the first time since 1903,” De La Cruz wrote, adding that the “fact of the matter is that I’m the only Republican in recent memory that has even come close to defeating a Democrat in this district.”

With support from the National Republican Congressional Committee, House GOP leadership and high-profile in-state Republicans, De La Cruz has been able to keep her primary mostly clear until recently. As it became increasingly clear Gonzalez would switch districts, at least two other Republicans jumped in the race: Mauro Garza, a former congressional candidate from the San Antonio area, and Ryan Krause, De La Cruz’s former opponent in the 2020 primary runoff for the 15th District.

In the announcement of his candidacy, Garza’s campaign described him as a “long South Texas resident with a home in McAllen” — and sought to deflate De La Cruz’ frontrunner status a little. The campaign said Garza had $365,000 cash on hand, calling it “not far from his Republican opponent Monica de la Cruz who announced only a couple months after her defeat in 2020.” De La Cruz had $422,000 in the bank as of Sept. 30. Over half of the $300,000 in receipts that Garza reported in the third quarter were loans to himself.