This article is co-published and co-reported with Military Times, an independent news organization reporting on issues important to the U.S. military. Sign up for its daily Early Bird Brief newsletter here.

The river was moving swiftly the morning Spc. Bishop Evans jumped into the Rio Grande near Eagle Pass to save two migrants who appeared to be drowning.

The risk was great. In the past month, at least 23 migrants had drowned in those waters. And rescues by Guard members patrolling the river were a regular occurrence.

The 22-year-old part-time field artilleryman from Arlington was found dead Monday — ending a four-day search for his body, which had been washed away by the river. He was one of 10,000 National Guard members deployed to Operation Lone Star, Gov. Greg Abbott’s prized mission to secure the Texas-Mexico border.

Evans jumped into the raging waters without a flotation device, the Texas Military Department said in an email Tuesday in response to inquiries from The Texas Tribune and Military Times.

He took that risk because, like many other troops on the mission, he wasn’t outfitted with the potentially lifesaving equipment.

The Texas Military Department ordered rescue ropes and hundreds of ring buoys in February to increase safety for water rescues. But the equipment had not yet arrived to most Guard members at the time Evans died.

“The incident is still under investigation, however we do not believe SPC Evans had a floatation device at the time of death,” the Texas Military Department’s public affairs staff said Tuesday in an unattributed statement. “We only received about 25 percent of the requested equipment due to delays from the vendor and global supply chain issues.”

The public affairs staff also said it made the request for equipment in February as part of its plan to address “gaps in equipment and safety gear.”

It’s not clear why the equipment wasn’t requested until February, 11 months after the mission began in March 2021. For months, soldiers have decried a lack of equipment on Abbott’s hastily deployed border mission, but the absence of water equipment is the first time that lack of supplies may have contributed to a soldier’s death.

Two Guard officials specializing in logistics told the Tribune and Military Times that the Texas Military Department sat on a request for flotation devices for three weeks before it was approved. The delays, those officials said, were avoidable and highlight the dysfunction plaguing the unprecedented $2 billion-per-year state mission.

The logistics officials, and eight other troops posted along the Rio Grande, spoke to the Tribune and Military Times under condition of anonymity after they were explicitly warned by military leaders against talking to the press.

The delays are new evidence of TMD’s staggering failure to ensure its troops have the equipment they need. The Tribune and Military Times previously investigated how haste and planning failures overwhelmed the department’s bureaucracy and led to significant hardship for the thousands of troops involuntarily mobilized.

Lawmakers are now calling for investigations into the lack of equipment.

“For any member of our Guard or DPS [Department of Public Safety] who are sent to the border along the river to not be assigned basic, inexpensive safety equipment is unforgivable,” said state Sen. Roland Gutierrez, D-San Antonio, who said he has requested information on whether service members have access to water equipment. “We believe the death of Bishop Evans was avoidable if he had been provided with the proper equipment.”

At a legislative hearing tracking progress on Operation Lone Star on Wednesday, the department's new leader Maj. Gen. Thomas M. Suelzer said TMD had a shortfall of water equipment. Despite having ordered 300 personal flotation devices to aid soldiers who may have to jump in the river, Suelzer said, the department only has 43 available to troops on the river for Operation Lone Star.

Suelzer said he expects that equipment to be delivered by mid-July. The department also has 190 ring buoys on hand and 235 that have still not been delivered.

But not all service members will be issued water equipment. Brig. Gen. Monie Ulis said troops who are not stationed near the border don't need the equipment and the department's goal is to have one flotation device for each security point, but not necessarily each service member.

"I am confident that one flotation device at the security point is sufficient," Ulis said.

Spc. Hunter Schuler, a soldier on the border mission who represents a group of newly unionized soldiers, said Evans’ death was tragic, preventable and unnecessary. He criticized the military department for not providing service members with water equipment.

“It is astonishing that with thousands of soldiers stationed along a river that has claimed countless lives over the years, we have yet [to] be issued flotation devices of any kind,” Schuler said.

The Texas Military Department said in its statement that service members are “strongly advised not to enter the water at any time for their safety” and that they are not given instructions or training on water rescue due to that restrictive posture.

Border Patrol agents have been busy rescuing migrants for the last month from the stretch of river where Evans died. A spokesperson for the agency told The Washington Post that agents rescued a dozen people in the same area two weeks ago after they were swept off their feet by a swift current.

A Border Patrol union representative told the newspaper that 11 bodies had been found this month on the U.S. side of the river along a stretch of the Rio Grande that extends west to Del Rio. At least 12 were found on the Mexican side.

Texas Guard officials have been aware of the danger for months, too. Six troops told the Tribune and Military Times that water rescues have been occurring despite guidance to avoid the water.

A source familiar with incident reporting said that Operation Lone Star troops have been performing about 15 to 20 water rescues each month.

Officials from the two main state agencies participating in the mission said they do not keep track of water rescues.

Department of Public Safety spokesperson Ericka Miller said that water rescues are “not information the department tracks.” The Texas Guard then admitted that it also does “not track water rescues” because they “are not part of our security operations.”

The military department acknowledged that service members were acting heroically to conduct water rescues, despite instructions to stay out of the water.

“When someone puts on a uniform, they do it because they want to help and serve the community and country,” the department said in its written response. “We are proud of the hard work and dedication of our service members, not knowing the dangers they may come across that day.”

Asked by lawmakers if Evans had broken protocol by jumping into the river, Suelzer said Evans had a human reaction to what was unfolding before him.

"He saw a human drowning and he jumped in the water to save them," Suelzer said. "We don't have a formal protocol, to the best of my knowledge, that weighs when somebody should jump in or not."

Suelzer said Evans was posthumously promoted to the rank of sergeant and will be granted an award.

“SPC [Evans] sacrificed himself, so that somebody else may live,” the department said in a statement. “That kind of selfless service act represents the soldiers and airmen we have serving in our force.”

The junior of the two logistics sources told the Tribune and Military Times that the border task force had requested the safety equipment in February with a one-week delivery time frame. 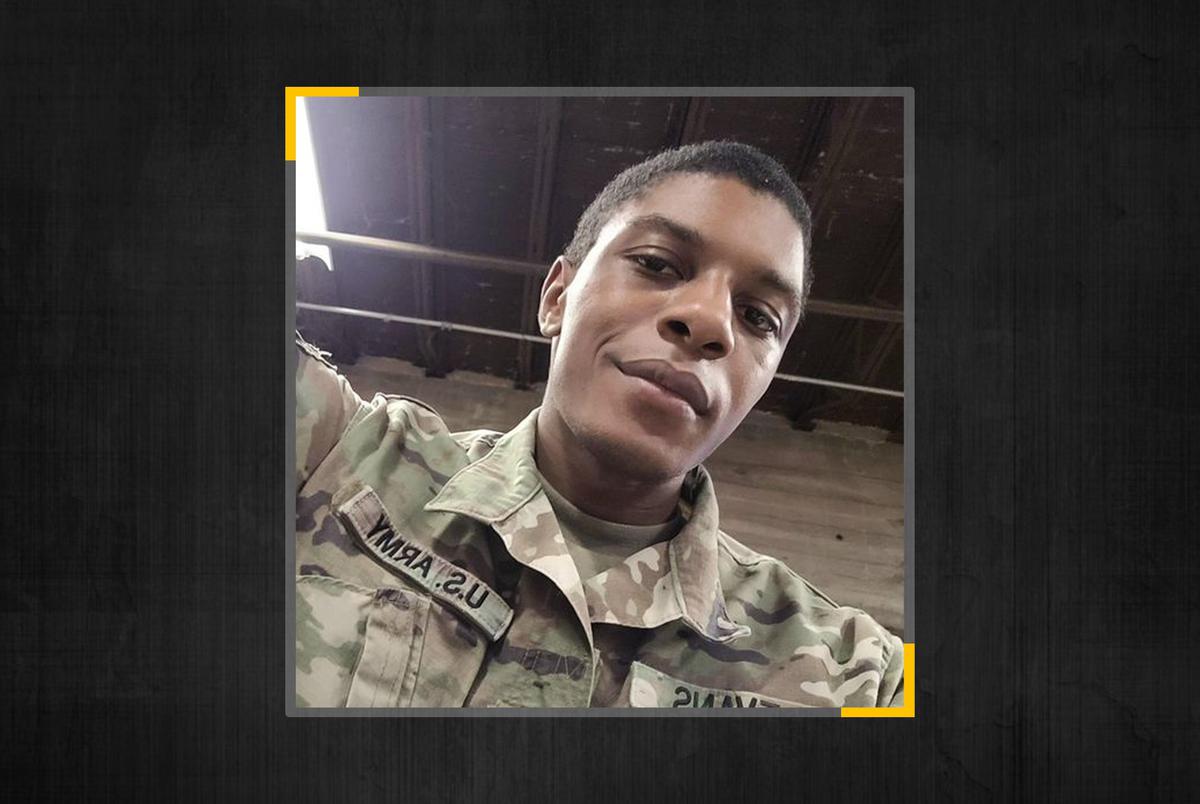 The senior logistics official also disagreed with the Texas Military Department’s reasoning that supply chain issues held up the delivery.

Trying to “get anything purchased in a timely manner is almost impossible,” the official lamented, due to administrative bottlenecks and “friction points along the way.” In the case of the late February purchase order, the Office of State Administration took three weeks to process it despite the one-week delivery request.

Early on in the mission, the senior logistics official said, units on the border were able to meet critical equipment needs locally by using government credit cards. But that practice ended due to the agency’s desire for greater oversight on purchasing, the source explained.

As a result, the state receives hundreds of purchase requests per day from the border mission, according to the senior official. And all of them must be processed by the Office of State Administration, a small cadre of TMD state employees who have also faced recent criticism for their struggles with the mission’s payroll.

The Texas Military Department is also struggling through a financial crunch. Operation Lone Star’s cost has ballooned to more than $2 billion a year, well beyond the $412 million the state Legislature budgeted for the mission. This month, TMD officials said the department would need another $531 million to fully fund the mission beyond May 1.

That request came after state officials had already transferred $480 million to the military department from other agencies in January to keep Operation Lone Star going.

The department’s public affairs staff said TMD’s budget woes had not affected how it prioritizes lifesaving water equipment — which was ultimately approved for purchase.

While the senior official cautioned that “there’s a lot of factors” that lead to tragedies like Evans’ death, such as his local leadership and job description, they said that part of the responsibility lies with senior leadership to determine what equipment troops need to have — and then to obtain it and station it where troops can use it efficiently and effectively.

Six troops who watch the river told the Tribune and Military Times they had not been provided flotation devices. It’s unclear how widespread the equipment shortage is — though the troops represent units spanning from Del Rio to Brownsville, in addition to various posts in between.

Only one service member, a soldier in the Laredo area, reported having any water rescue equipment at all. A unit there received rescue throw ropes in early April after its soldiers witnessed four migrant drownings in February and prevented a fifth, the soldier said.

One airman who spoke to the Tribune and Military Times said early in the mission officials told troops not to rescue people — including children — from the river, because it could be a distraction so smugglers could move drugs across other parts of the river.

An officer who leads around 40 soldiers along a part of the river with deep water explained that “it’s just not safe for us to authorize [water rescues]” without additional training and equipment, especially considering the hefty gear troops wear on duty. “I understand the instinct to save lives … [but] we are not comfortable with that level of risk.”

Some units received renewed orders to stay out of the river after Evans disappeared. Others were told they could only enter with flotation devices.

Schuler, the union representative, also criticized the department for not soliciting soldier feedback in the months since its last survey of the troops, which he said “produced scathing criticisms of the mission.”

“Our hope is that the new TMD command staff learns from this tragedy, listens to soldiers, and works cooperatively with leaders on the ground towards safer working and living environments,” he said in a text message. “With the growing number of service member fatalities on Operation Lone Star, what more will it take for the Governor to end this political charade? It is long past time to let the thousands of involuntarily activated guardsmen and women return home to their families - before it’s too late for yet another soldier.”

Help mission-driven journalism flourish in Texas. The Texas Tribune relies on reader support to continue delivering news that informs Texans and engages with them. Donate now to join as a Texas Tribune member. Plus, give monthly or yearly now through May 5 and you’ll help unlock a $10K match. Give and double your impact today.