1 hospitalized, 1 in custody after argument leads to stabbing on East Side, police say

“We are in mourning”: As parents awaited news, Uvalde residents processed their shock and grief

UVALDE — Dozens of families in this South Texas town, roiled by the deadliest school shooting in modern Texas history, waited for hours on the lawn of a civic center Tuesday for unthinkable news that took hours to deliver.

The building served as the reunification center for families of students evacuated from Robb Elementary School after a shooter opened fire, killing at least 19 children and two adults.

As the sun fell Tuesday, parents huddled close to their children on the lawn of the SSGT Willie de Leon Civic Center, sitting on the stone edging or in the grass, waiting to be called by officials. Some arrived as early as 3 p.m. and waited well past 10 p.m. to learn whether their child had died.

Young children — the siblings and cousins of those who were evacuated — played quietly under the trees for much of the afternoon that waned into the late night. Adults cried or simply sat in silence, embracing each other.

“It’s the waiting [that’s hard],” said Manny Gonzalez, 51, who has lived in Uvalde for three decades. 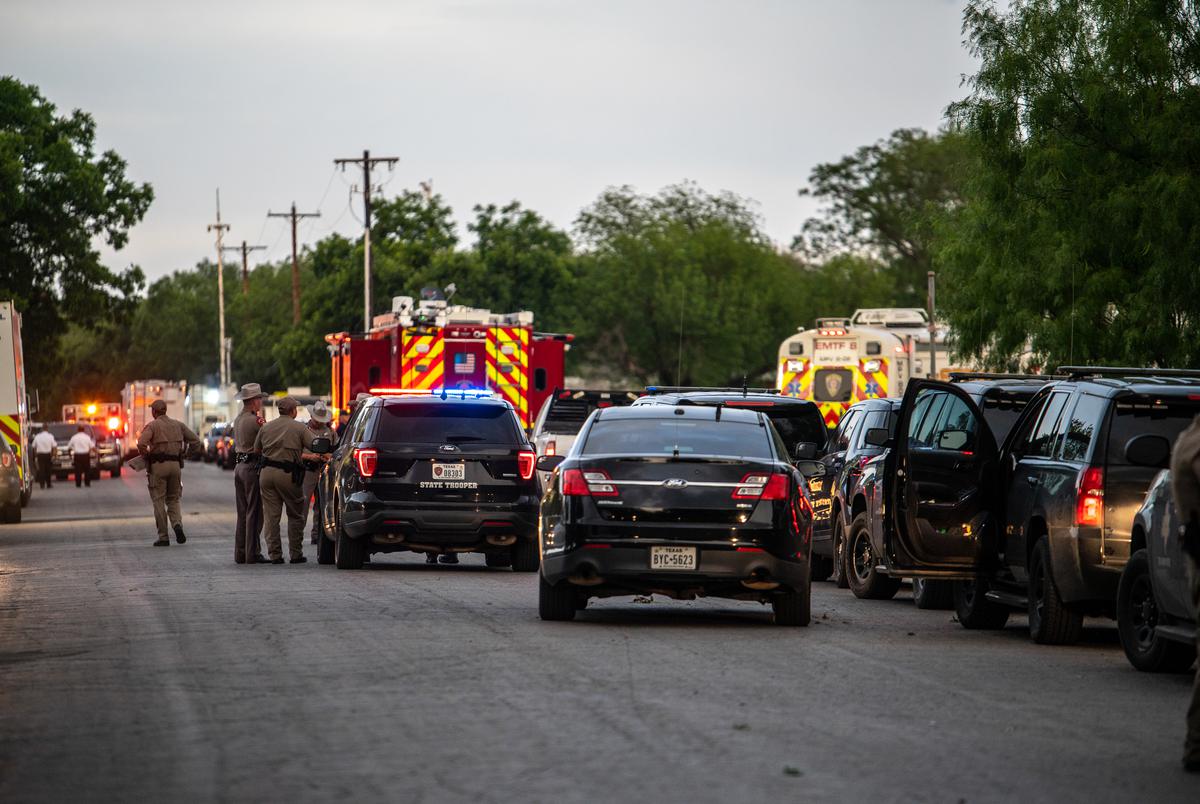 Police block off the road leading to the scene of a school shooting at Robb Elementary on Tuesday, May 24, 2022 in Uvalde, TX. Credit: Sergio Flores for The Texas Tribune 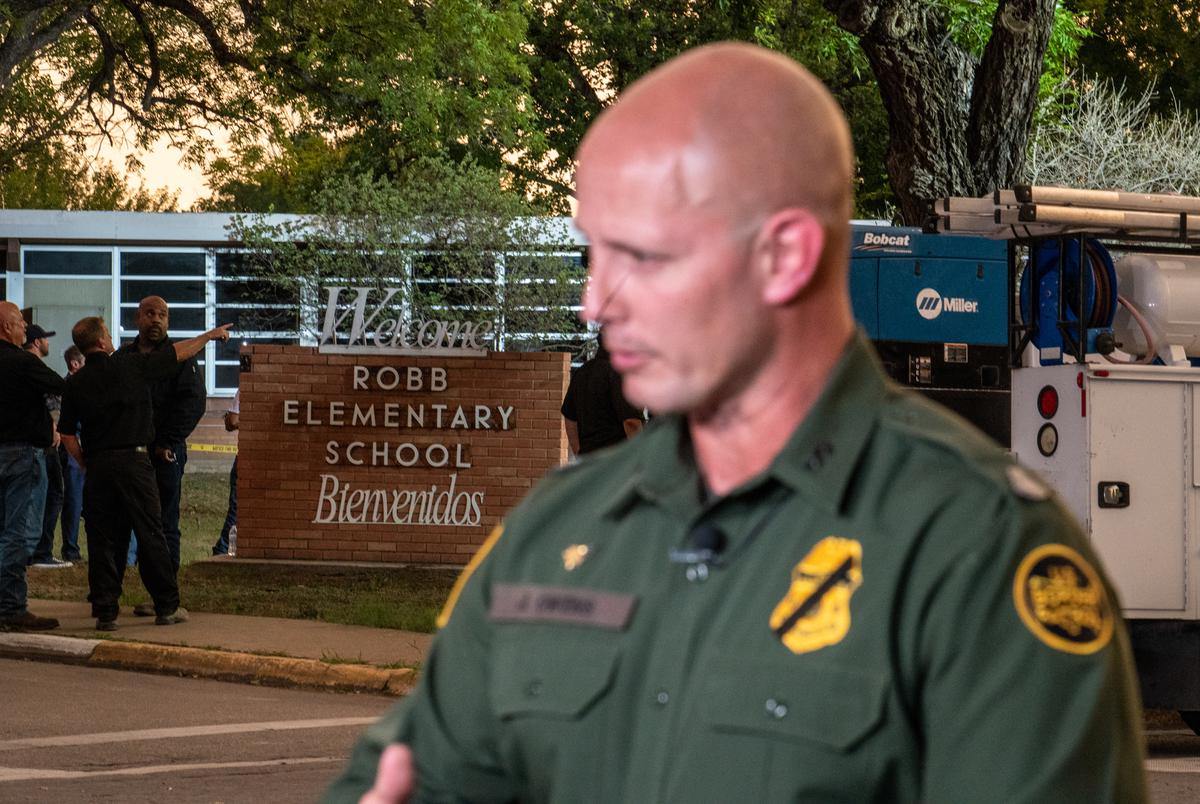 A Customs and Border Patrol agent speaks to a reporter near the scene of a school shooting on Tuesday, May 24, 2022 in Uvalde, TX. Credit: Sergio Flores for The Texas Tribune

Left: Police block off the road leading to the scene of a school shooting at Robb Elementary School. Right: A U.S. Customs and Border Protection agent speaks to a reporter near the scene of Tuesday's school shooting. Credit: Sergio Flores for The Texas Tribune

He stopped by the civic center to support his extended family, who is related to one of the children at the school.

“This is a very strong community,” he said. “It’s a good place to live and raise a family. … Now, our little town will be all over the world.”

Uvalde is a relatively small city about 85 miles west of San Antonio. Its population of roughly 15,200 is predominantly Hispanic. Robb Elementary teaches second, third and fourth grade students. The school had 535 students in the 2020-2021 school year, most of them Hispanic and considered economically disadvantaged.

Mary Fowler, 64, worked in Uvalde Consolidated Independent School District for more than three decades as a physical therapist and knows many of the teachers and kids in the school district. Her grandson was at the school when the shooter opened fire.

“It’s just a really good, small community,” said Fowler, whose son-in-law works for the school district. He was running an errand at the school when the shooter entered. “I can’t believe this has happened here. I just can’t.”

She said before the shooting, it felt like the town was turning a corner after the COVID-19 pandemic disrupted jobs and school for the last two years.

“We aren’t the richest town,” she said. “Everybody is struggling, and it was just starting to feel like we were getting back on our feet. It’s going to be tough.”

The students were scheduled to celebrate their last day of the school year on Thursday.

Tuesday’s shooting was the eighth mass shooting in 13 years in Texas, a state where the Republican-dominated leadership has repeatedly loosened gun laws. Top state officials again quickly signaled that the deaths in Uvalde would not likely lead to stricter gun control in the state and instead pushed for arming more teachers and adding police to school campuses.

Inside the city’s civic center Tuesday, law enforcement, crisis counselors and local officials awaited parents, swarming about in hushed tones. Officials took DNA samples of the parents inside, used to confirm whether or not their child had died in the shooting, family members of the parents said. Once taken, the parents were sent back out to the setting sun.

Late into the evening, a few families still did not have answers and cried quietly outside. Some formed prayer circles outside as they left with unbearable news. Then, just before midnight, between 30 and 40 people who remained were informed about their loved ones, and were escorted out by officials.

A few blocks away, Joe Perez, a 66-year-old minister of Getty Street Church of Christ, said he spent the evening praying with members of the church for the families who lost children.

“My heart hurts for them,” said Perez, a member of the church for almost two decades.

He said friends, relatives and members of other churches came from all over the state — San Antonio, Austin, Laredo and more — to grieve.

“We are all in mourning. We are family because we are a small community,” he said.

Irene Richards, an aunt of a student at Robb Elementary, went to the school for an awards ceremony with her niece earlier in the day. She said her family left the school just before the shooting occurred and her niece was later reunited with her family.

“I praise God that we weren’t there and I got another opportunity to see her again,” Richards said. The image of the awards ceremony, she said — little kids, happy and proud to receive recognition for their attendance and honor roll awards — is forever emblazoned in her mind.

At Sacred Heart Roman Catholic Church in Uvalde, mourning residents lined the church’s 24 rows of pews for an evening mass by the archbishop of San Antonio Gustavo García-Siller. García-Siller, speaking to the predominantly Catholic community, called the congregation to action: God wants his people to live, he said.

“We cannot just say this is going to happen again,” García-Siller said. “Something has to be done.”

Lupe Villasana, 34, grew up in Uvalde. Her nephews, in the fourth grade, attend Robb Elementary. She said they’re safe, but the massacre has changed their lives — and the town — forever.