Shopping from small businesses can benefit the entire community

WATCH: Couple who graduated from UTSA gets engaged during Saturday’s game at Alamodome

Clean and whiten your teeth, improve gum health, for only $30 through Sunday

The solemn succession of families took turns walking from the steps of the Texas Capitol to a lone microphone placed in the bright Saturday sun. There, they shared sacred details of loved ones, who were among the 21 people gunned down on May 24 in Texas’ deadliest school shooting.

Eliahna Torres was excited about the final softball game of the season.

Alexandria “Lexi” Aniyah Rubio would have become a lawyer.

In the midday heat, relatives of the 19 students and two teachers killed at Robb Elementary in Uvalde — and survivors of other mass shootings — demanded action from Texas leaders on gun reform.

“I didn’t choose to be here, I was kind of thrown into here,” Jasmine Cazares told The Texas Tribune in the shade of the Capitol, after the rally.

Since the shooting, Cazares has been advocating for gun reform on behalf of her sister, Jackie.

Gov. Greg Abbott was the focus of many family members’ anger during the Saturday rally on the Capitol steps, organized in part by the student-led gun safety advocacy group March For Our Lives. Abbott has made a vocal enemy in the parents and relatives of the Uvalde shooting victims, drawing criticism over his inaction to address one of the families’ primary concerns: limiting access to firearms and making it more difficult for another massacre to occur.

Aware of Republicans’ tight grip over the state’s lax gun laws, advocates called for compromise with GOP leaders, asking for a special legislative session to increase the minimum age to purchase a semi-automatic rifle in the state from 18 to 21 years old — not an outright ban on the style of weapon that was used at Robb Elementary, just a three-year increase to the legal age for purchasing one.

The 18-year-old gunman in Uvalde bought two AR-15-style rifles immediately after turning the legal purchasing age in May.

Only Abbott can call a special legislative session but he has so far resisted all requests to do so in the aftermath of the Uvalde shooting. He has been criticized for attending — rather than canceling — a fundraising event for his reelection campaign the night of the shooting. He is being challenged for his seat by Democrat Beto O’Rourke, a former U.S. congressman from El Paso who previously ran unsuccessfully for U.S. Senate and president.

Uvalde residents traveled the three hours to Austin to advocate for action. Their pleas on Saturday came on the heels of a ruling two days earlier by a federal judge in Fort Worth that a Texas prohibition barring adults under 21 from carrying handguns was unconstitutional, though he let the law stand pending an appeal. And despite Texas experiencing eight mass shootings in the past 13 years, the state’s gun laws have only loosened.

Many at the rally on Saturday said they just want some sort of compromise on gun reform. They said they anticipate taking a prominent role in an ongoing movement. 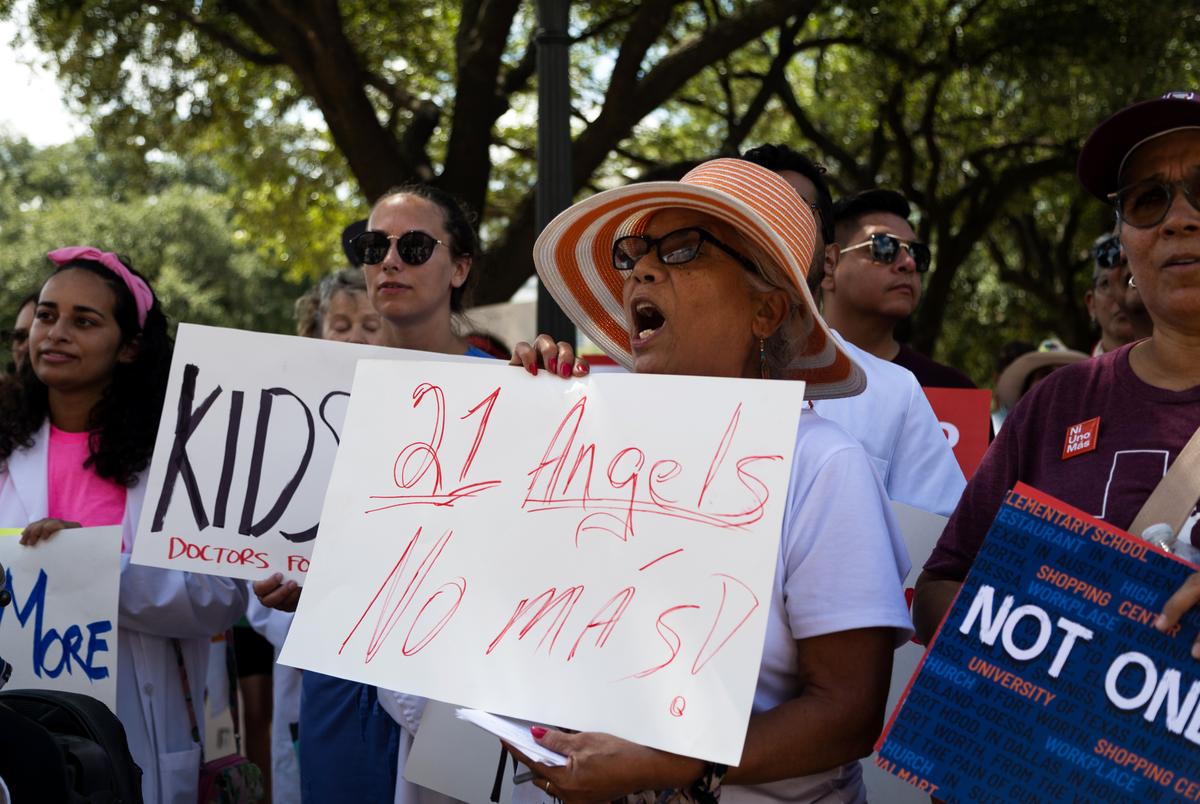 People held signs during a March For Our Lives protest at the Capitol. Credit: Evan L'Roy for The Texas Tribune 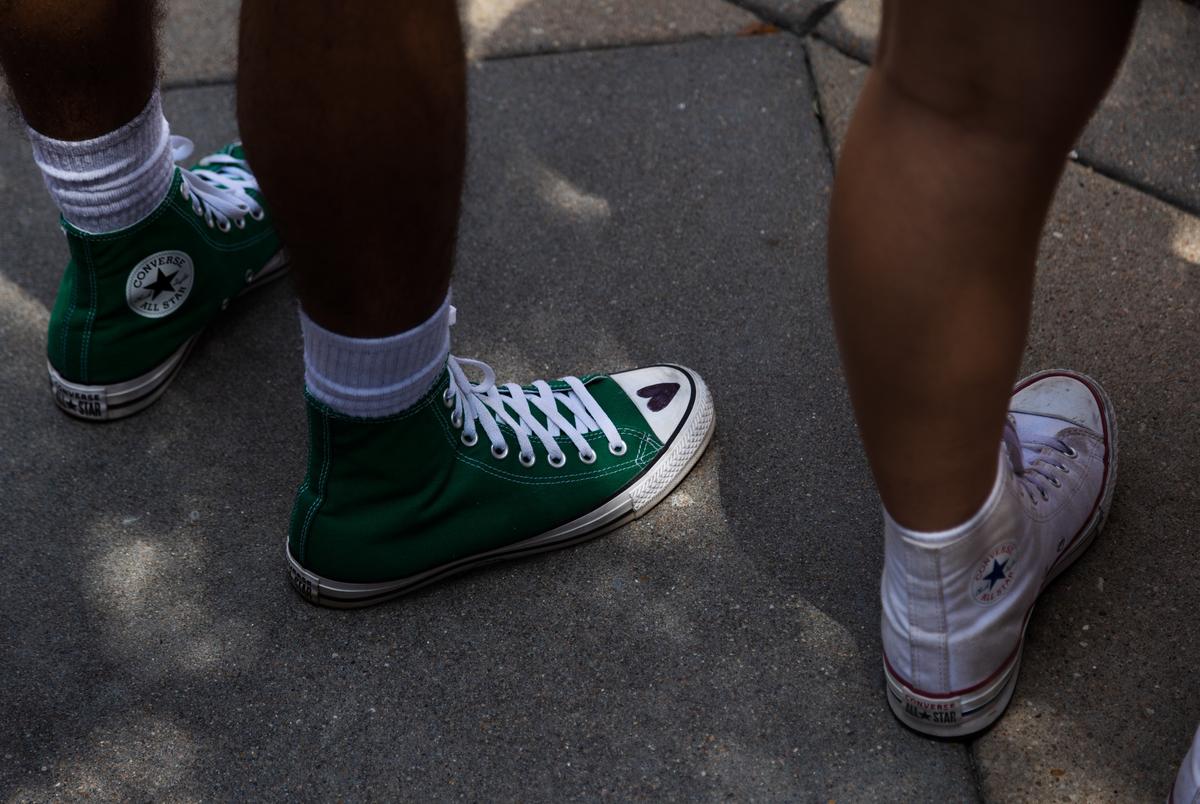 Family members of Maite Rodriguez wore green Converse sneakers in her memory during the rally. Credit: Evan L'Roy for The Texas Tribune

First: People held signs during a March For Our Lives protest at the Capitol. Second: Family members of Maite Yuleana Rodriguez wore green Converse sneakers in her memory during the rally. She was identified after the shooting by her own pair of green Converse sneakers with a heart drawn on the toe of the right shoe. Credit: Evan L'Roy/The Texas Tribune

She said pushing for gun restrictions in a state that holds dear the constitutional right to firearms is exhausting but uplifting.

Her father, Javier Cazares, said that in his first meeting with Abbott, just a day after the tragedy, the governor seemed genuine in his concern. But months later, when Abbott returned to Uvalde, he said the governor’s presence felt more like a campaign stop.

Abbott also drew ire shortly after the shooting for providing false information in press conferences. The governor initially praised the law enforcement response to the shooting, at one point saying, “it could have been worse.” Nearly 400 law enforcement officers waited more than an hour to confront the gunman at Robb Elementary in a response that has been widely and fiercely criticized, including in a report by a Texas House committee that investigated the matter. Abbott later said he was misled about the response before he made those public comments.

On Monday, Abbott’s spokesperson, Renae Eze, said in a statement that Abbott had taken action to “address all aspects of the heinous crime committed in Uvalde.” She said that included providing $105.5 million to fund safety and mental health initiatives.

“The Governor also requested the Texas legislature work together on legislative recommendations to make schools safer, including considering school safety, mental health, firearm safety, police training, social media, and more,” Eze said. “As Governor Abbott has said from day one, all options remain on the table as he continues working with state and local leaders to prevent future tragedies and deploy all available resources to support the Uvalde community as they heal. More announcements are expected in the coming days and weeks as the legislature deliberates proposed solutions.”

According to his social media pages, he spent Saturday campaigning, knocking on voters’ doors in Fort Bend County.

When Javier Cazares asked Abbott to increase the minimum age to buy a semi-automatic rifle, he said the governor evaded the question. Other Uvalde families shared stories of Abbott offering his help, asking what he could do for them, only to be disappointed by his lack of action on the issue of gun reform — the one concession families drove to Austin to demand in the hope that future Texas families wouldn’t share their fate. 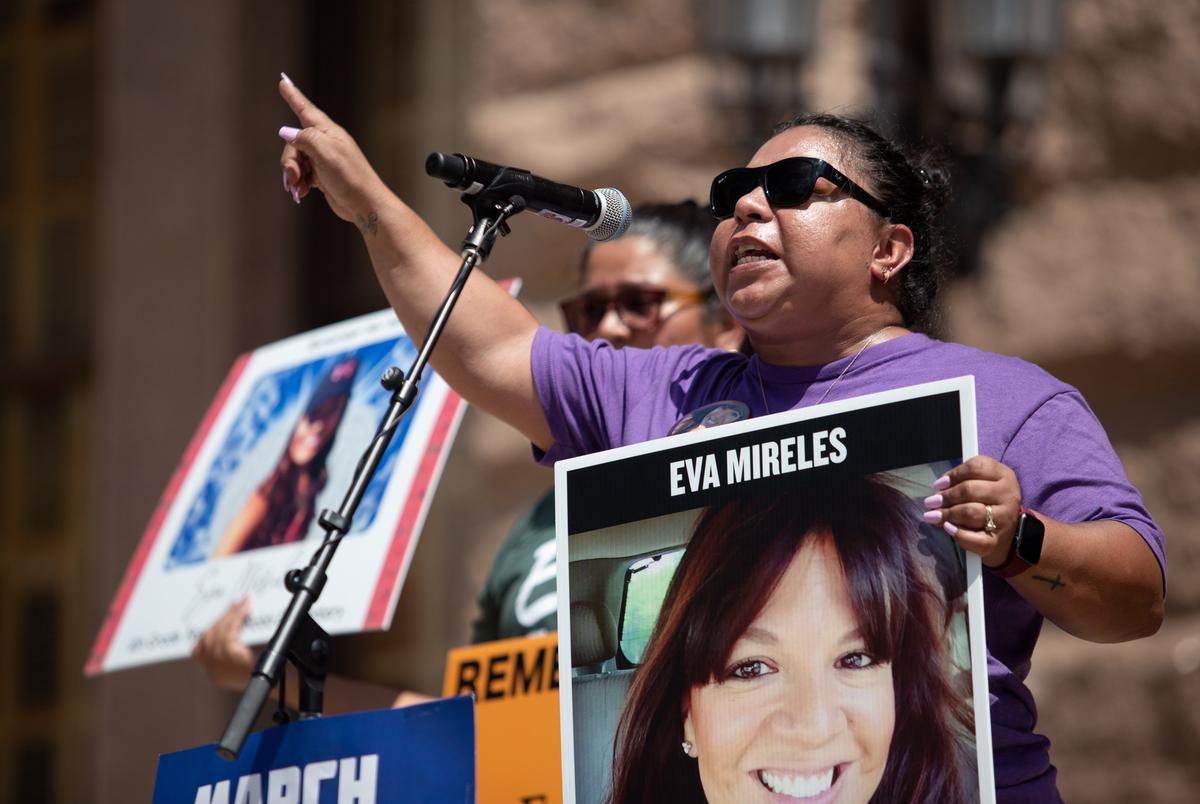 Maggie Mireles Thomas, sister to teacher Eva Mireles who died in the mass shooting, spoke during a March For Our Lives protest at the state Capitol on Saturday. Credit: Evan L'Roy for The Texas Tribune

When Maggie Mireles Thomas and her family met Abbott following the death of her sister, Eva Mireles, one of the Robb Elementary teachers, he asked her, “What can I do, please?”

“I told him to his face, ‘You can change these laws, that’s what you can do.’ And he said he would be hard at work to do that and that has not happened,” Mireles Thomas told the crowd. “He has not kept his word to my family and to any of these families.”

Abbott’s response was familiar to the families of other Texas mass shooting victims. Those survivors spoke in support and solidarity of the Uvalde families. Rosie Stone recalled Abbott’s similar inaction after her son, Chris, was killed in the 2018 Santa Fe High School shooting.

“We were at his house, right over there, we were promised a lot of things, we asked for a lot of change, and nothing ever changed,” Stone told the roughly 300 gathered for the rally, pointing to the Governor’s Mansion, which stands only 1,000 feet away from the Capitol steps. “I’m a conservative Republican, I’m a gun owner myself, but I can stand amongst Democrats and see the changes that need to be made.”

With Republicans in charge of all levels of state government, Stone said the power to be able to make change is in their hands. Limiting access to guns, though, has long been a nonstarter for the GOP.

After the Robb Elementary shooting, Republican U.S. Sen. John Cornyn earlier this year helped shepherd through Congress the first major federal gun legislation in nearly three decades. Among other things, the law enhances background checks for gun purchasers younger than 21 and makes it easier to remove firearms from people threatening to kill themselves or others. But it largely does not restrict any rights of existing gun owners — and Cornyn faced backlash from his own party after ushering the law through the Senate.

Families from Uvalde are hoping they won’t have to stand with future parents of school shooting victims to demand action. But they’re willing to continue fighting and advocating for changes to gun policies in Texas.

Vincent Salazar told the Tribune he didn’t see himself as an advocate prior to May 24, but in the three months since the tragedy, in which he lost his 11-year-old daughter, Layla Salazar, he hasn’t seen any progress on the issue of gun reform from Abbott. So he came to Austin to fight for his daughter.

“Being out here feels like the right thing to do,” Salazar said.

The full program is now LIVE for the 2022 Texas Tribune Festival, happening Sept. 22-24 in Austin. Explore the schedule of 100+ mind-expanding conversations coming to TribFest, including the inside track on the 2022 elections and the 2023 legislative session, the state of public and higher ed at this stage in the pandemic, why Texas suburbs are booming, why broadband access matters, the legacy of slavery, what really happened in Uvalde and so much more. See the program.

Correction, Aug. 30, 2022: Due to an editing error, a previous version of this story misstated what weapons Uvalde residents want 18- to 20-year-olds banned from buying. They want state lawmakers to ban people those ages from buying semi-automatic rifles, not automatic rifles.