2 warnings, a watch and an advisory in effect for Mcmullen and Val Verde Regions

2 warnings, a watch and an advisory in effect for Mcmullen and Val Verde Regions

SAPD: Man struck by vehicle in hit-and-run crash on Highway 90

SAN ANTONIO – For all the numbers that matter in Bexar County -- 1.4 million in population, Loop 1604's 99-mile circumference, a whopping 19 school districts, and on and on -- none may matter more than the last five digits on a student's address.

ZIP codes in San Antonio carry a great deal of weight, providing their residents with a sense of identity and place and community, and can represent a sort of shorthand for the vast economic diversity seen across the county, from Alamo Heights' posh 78209 to the South Side's 78211 and the fast-growing 78258 on the far North Side.

They can also determine where -- and how -- a student is educated.

Numbers from the San Antonio Board of Realtors put them into even greater perspective.

OUR FUTURE: The costly price tag and legal challenges of educating our children

As you head south, however, so too do the numbers.

In Harlandale, Southside and South San Antonio ISDs, a combined 143 homes were sold for an average price of $127,500.

“The driving forces are deeply historic,” Dr. Christine Drennon, associate professor of sociology and anthropology at Trinity University, said. “They have a lot to do with wealth and the accumulation of wealth over generations, and who has been able to accumulate wealth and who has not and why.” 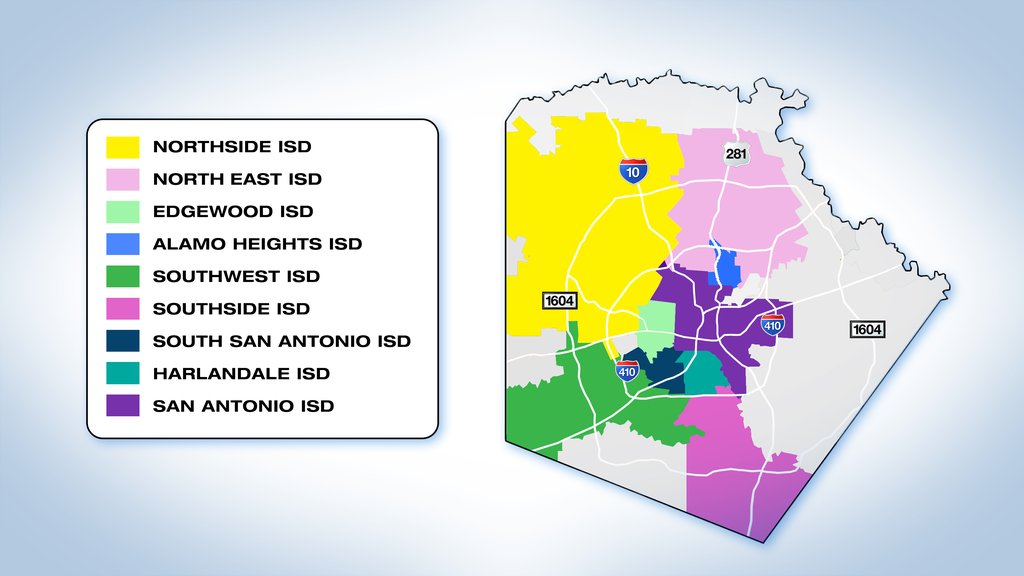 What does that mean?

Well, students in the 78258 ZIP code likely attend Northeast Independent School District schools. For residents in 78209, their kids are zoned for Alamo Heights ISD. Residents in 78211, on the city's South Side, send their children to South San Antonio ISD schools.

NUMBERS: How much does your child's school district spend to educate

All three names — Stone Oak, Alamo Heights and the South Side — all carry instant identifying markers for most San Antonio natives.

As recent publications have shown, San Antonio is one of the most economically segregated cities in the country, a divide that very much has an impact on school districts. A map published in the State of Texas Children 2016 report by the Center for Public Policy Priorities showed that the areas of highest likelihood of children in poverty were almost exclusively within Loop 410. Using data from the U.S. Census, the report also said: "White children in Bexar County are more likely to live in low-poverty areas, while the majority of Latino children are more likely to live in moderate-to-high-poverty areas."

“The school districts come together, in their present day form, on top of that very racialized landscape," said Drennon, who has done extensive research on San Antonio's inner city and its schools as director of Trinity's urban studies program. “They are very gerrymandered around that, if you look at the history of the boundaries.”

In the early 20th century, when newer neighborhoods were platted, deed restrictions and laws kept minorities out, Drennon said.

Whereas Monte Vista, now a historically protected neighborhood, had large and uniform lots, a quick drive to the West Side shows what Drennon calls more “haphazard development.” Her research also showed that in the 1930s -- in a 4-square-mile area known as the "Mexican Quarter" on the city's West Side -- almost all the Latinos in San Antonio, nearly 65,000, called the area home.

“This is the land patterns that we have inherited,” she said. “You drive through parts of the inner city and you still see that.”

But it is more than just history playing a role in children’s lives today.

“Our kids, when they are walking into school, are trying to do their best to respond to what is being given to them at school, but they still have a life,” Jessica Weaver, president and CEO of Communities in Schools San Antonio, said.

CIS started in the Alamo City in the mid-1980s and has since expanded into 99 schools across 11 school districts in San Antonio and South Texas. The nonprofit works to support teachers and schools, already tasked with their day-to-day responsibilities.

“So when a teacher might be in a classroom and sees a student and identifies that student is maybe falling asleep in class, or they noticed their clothes (aren't) kept up on an everyday basis, rather than seeing that as negative toward the child, they ask for CIS to support them and find out if there is something they can do.” Weaver said.

“There is deep neighborhood pride in those schools,” Drennon said. “We can’t ignore that, because that is what keeps them healthy. If anything, they (are) more important than they ever were.”

But for all the problems that many students face, a band of people and organizations working to fill the gaps.

Through the years, Communities in Schools has entered districts that some might not expect would need the assistance. The need has followed the city's growth: Combined Northside and North East have 17 traditional high schools, with NISD opening a new one this fall. Meanwhile, on the other side of Highway 90 -- between Harlandale, East Central, South San, Southside, Somerset and Southwest -- a new high school has not been added in decades.

“These are the students that are most at risk,” Weaver said. “We really serve across the city, from Northside (ISD), Northeast (ISD) all the way to way south San Antonio. We have seen the need go across the city and the opportunity to support these kids can come from across the city.”

The issues include not knowing where their next meal will come from or not being in the same home for a long period of time. The State of Texas Children report said more than 25 percent of all children in Bexar County, nearly 120,000, are considered "food insecure." That is where CIS helps students and families, whether it is giving out more than 4,500 food packs in 2016, providing utility assistance or helping a child through an emotional time.

“So you surround the student with the community support, creating that one-on-one relationship and empowering them to stay in school and achieve in life," Weaver said.

Of the more than 8,000 students served by Communities in Schools, 99 percent stayed in school, 93 percent saw an improvement in academic performance, 95 percent moved onto the next grade and 96 percent graduated from high school, according to the nonprofit's 2016 annual report.

The city also launched Cafe College, a free one-stop shop for students and families providing information about college in both English and Spanish.

There is also Pre-K 4 SA, which has the goal of improving education opportunity and reach. The schools provide 4-year-olds the chance to attend pre-kindergarden all day. It also has after-school day care until 6 p.m. for working parents.

Providing a way forward for children seeking the same goals, but maybe on a different path.

“It is not a different dream, it is just, ‘How are we going to get there?’” Drennon said.